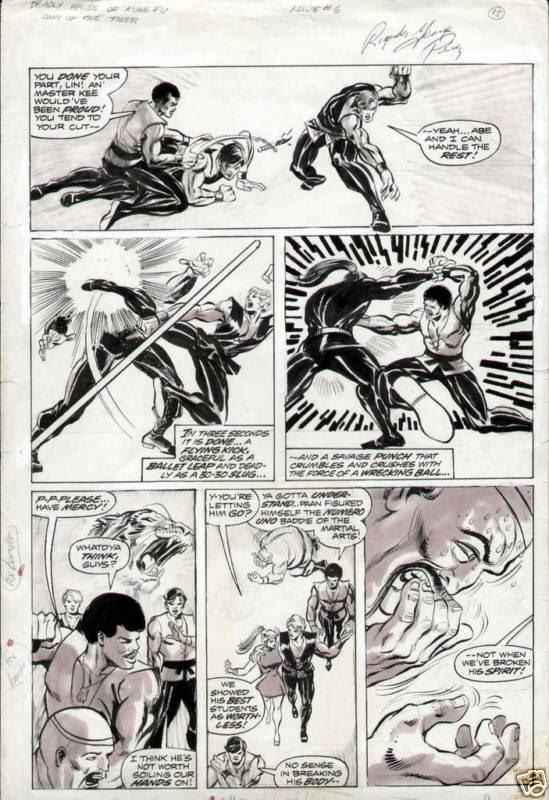 Time for another parade of original comic art... starting with page 15 from Deadly Hands of Kung Fu #6, by George Perez!

Movie of the Week: Terror of Mechagodzilla/Terror of Godzilla! 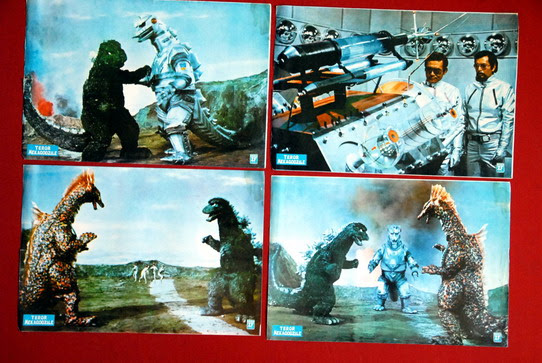 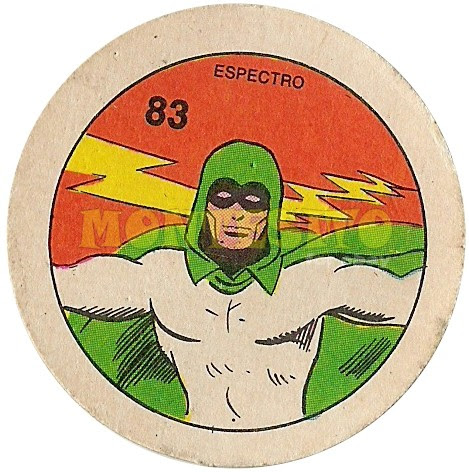 First up this time around is this Spectre Argentina trading card! I believe this is only the third Spectre item I've come across for posting as a cool stuff item! 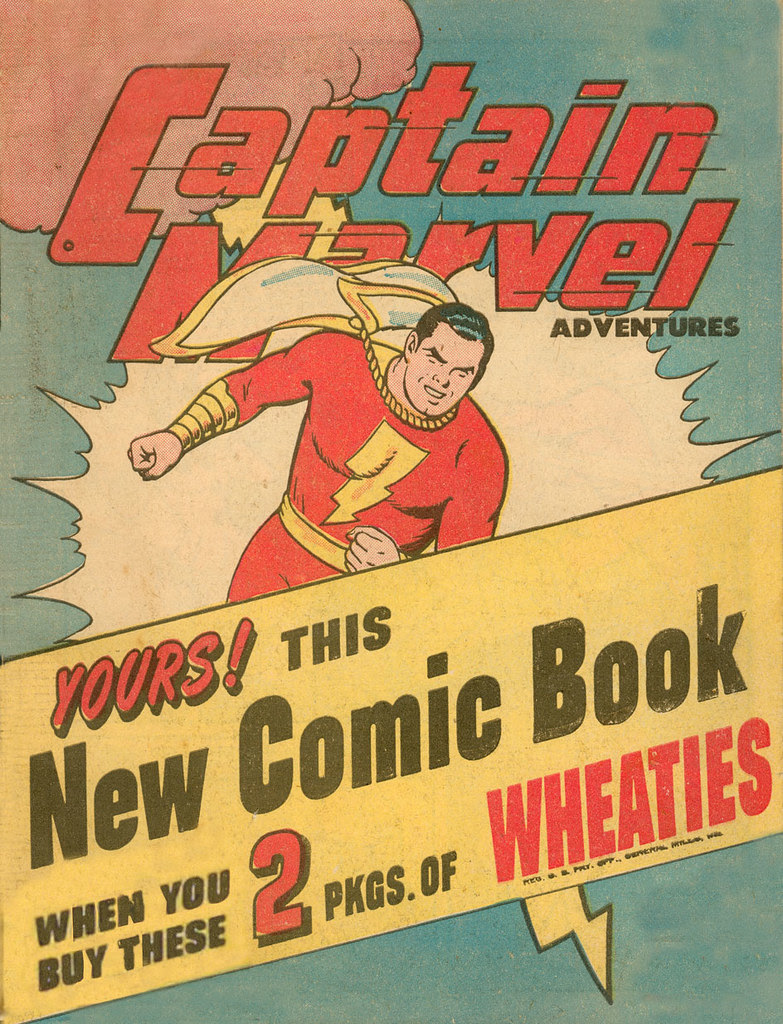 CBT: The Flintstones in The Bedrock Connection! 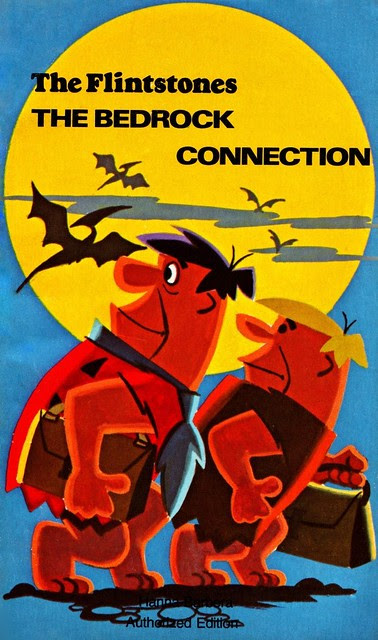 You may recall that last summer, my family and I visited Disneyland, where I was able to enjoy most of my favorite rides! Unfortunately, two of my favorites no longer exist (one does in modified form), and one was closed when we were there! So, with no further ado... after the jump... my ten favorite Disneyland attractions, with ridealong videos from YouTube! 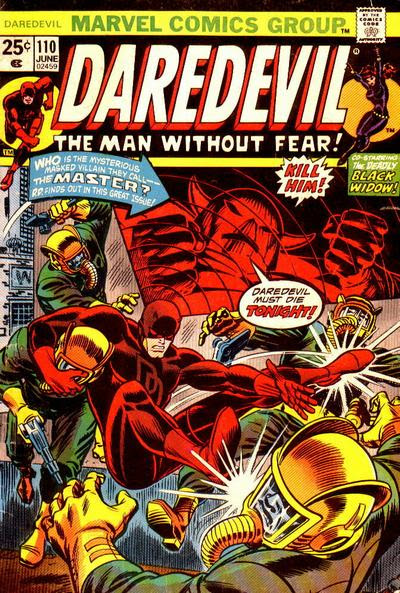 Continuing with DD's title... issue 110 finds the Widow's icon still on the cover, but it's definitely no longer being called "Daredevil and the Black Widow"!

Been a while since I've done a roundup of what's going on, let's see what I have today (in a slightly different format than in the past)!

I Forget That Sometimes, eBay Buyers Are Stupid, Too
As you may recall, a few weeks back I started putting up some stuff on eBay again. Among the items I've been selling in the last few weeks have been some Give-A-Show Projector stuff, including two sets of slides and a record for the Talking Show Projector. Well, yesterday I heard back from the buyer of one set I'd sold that was still sealed and in mint condition. This idiot apparently couldn't be bothered to actually read the auction title (which said "Kenner Talking Show Slides and Record SEALED MINT") or looked properly at the photo: 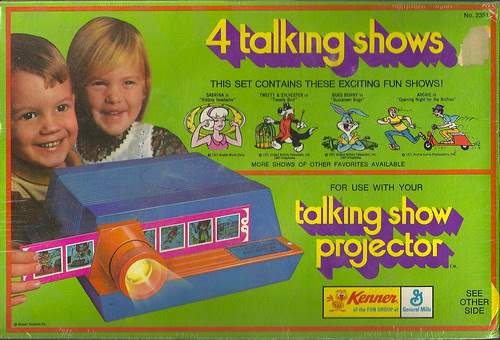 Now, I don't think I'm wrong in thinking that there's no way that posting a photo of the actual item that I'm selling could possibly be construed as being misleading, but this person insisted that it was, and that what they thought they were purchasing (and only paying $3.50 shipping for) was an actual Talking Show Projector.
Am I entirely wrong to think that this person is an idiot? Here's what I said about the item in the auction: I am pleased to offer to my fellow collectors of Kenner's Give-A-Show Projector and related items this sealed mint condition Talking Show Projector slides and record, featuring Sabrina the Teenage Witch in “History Headache,” Tweety & Sylvester in “Tweety Bird,” Bugs Bunny in “Buccaneer Bugs,” and Archie in “Opening Night for the Archies.” Produced in 1971. Record features the voice of Mel Blanc and others. If you don't have a Talking Show Projector, these slides can be used with a standard Give-A-Show Projector. I would be happy to provide the winner with MP3s of the audio from the records via email after the close of auction upon request. Does any part of that even come close to implying that what is being sold is a Projector? I mean, I even pointed out that if you don't own a Talking Show Projector, you can view the slides on a Give-A-Show Projector.
Anyway, despite all this, this idiot (whose feedback rating is 3, by the way) wanted to get a full refund (including shipping) on their item... and also expects that I will send them this refund BEFORE they return the item.
My policy is always that returns would be only if the item was not as described, and even then I'll only refund the winning bid price, and after the item is returned.
I've exchanged a number of emails with this person pointing out all the things that they apparently chose to ignore -- I even sent them a photo of what a Talking Show Projector box looks like! -- and still they expect me to trust them enough to send a complete refund without getting the item first.
Apparently they've never returned anything to a store before, else they'd know that nobody will refund money on a purchase without receiving the merchandise first... and I'm not aware of anyone who will refund postage costs.

Emerald City Comic-Con Is Coming!
On March 5th (a Saturday), I will be attending the Emerald City Comic-Con in Seattle, Washington, accompanied by my son Tristan, my brother Jeff, and my good buddy Bjorn (who was part of my old Champions gaming group that I've written about in the first year or so of this blog)! Jeff, Bjorn and I are all pretty good-sized guys (both height and weight-wise), we all wear glasses, and Jeff and Bjorn have goatees, so we should be pretty easy to spot, I'd think! So if you're going to be at the convention that day, please feel free to stop me and say hi! I know I'm going to be looking for fellow blogger Reis O'Brien of "Hey! Look at My Toys!" and "Hey! Look At My Art!" (and formerly of some other blog called "Greek Orphanage" or "Gleek Or Hydrox" or something like that) while I'm there. I'm planning on bringing the digital video camera with me, so there'll be a video report here a day or two after the show!

School News
As I'm writing this, the end of Winter Quarter is but a few weeks away, and I'll have two quarters left until I graduate and get to go back to work again (yay!). This quarter has been a bear, given that I'm taking 19 credits! Another thing that makes it a bear is that one of my instructors appears to be a bit disorganized this quarter, especially with the online class they're teaching. But probably the worst thing about it has been this one class where the person sitting next to me is constantly bothering me with questions! If they were good questions, that would be one thing, but most of the time it's stuff that the instructor just talked about! She also has a tendency to arrive for class late, and is constantly offering up excuses as to why she can't seem to keep things straight. The way things are going, I suspect I'm going to run out of patience with her and just say, "Look, if you can't pay enough attention to what's being taught, then wait until after class and ask the teacher -- I am not here to be your instructor, I'm here to learn!" Or maybe I won't even be that polite about it.

Give-A-Show Blog News
I think that I'm just going to have to bite the bullet and consider the Give-A-Show Blog to be more or less retired... there's not too much more that I can really add to the blog at this point (at least, nothing I've been able to find at an affordable price). On the other hand, my View-Master collection has been growing pretty quickly! Now, I'd considered the idea of transforming the Give-A-Show Blog into the Give-A-Show/View-Master Blog, but instead, I'm thinking I'll just start a new blog for the View-Master stuff, and make sure that I get a chance to backlog some videos before I start posting that one, to make sure I can stay on schedule. But before that, I really need to find me an inexpensive scanner with a transparency adapter and enough resolution so that I can scan the View-Master reels instead of having to ask brother Jeff to do them for me! Jeff does an outstanding job on them, but he's a busy guy, and doesn't always have time to turn the scans around quickly enough for me!
The other thing I need to decide is if I'm going to do voiceovers for these videos (as I've done on a few that were already posted to the Give-A-Show Blog) or if I'll just keep it basic, and add the text to the pictures, or a combination of both! Your input would be appreciated!
Of course, just because the Give-A-Show Blog is likely retired, that doesn't mean that Give-a-Show Fridays is going anywhere... far from it! I still have lots of videos that haven't appeared here yet!

Random Videos of Geekery: Filmation's Journey to the Center of the Earth!

A full episode of this late 1960s Filmation cartoon after the jump! 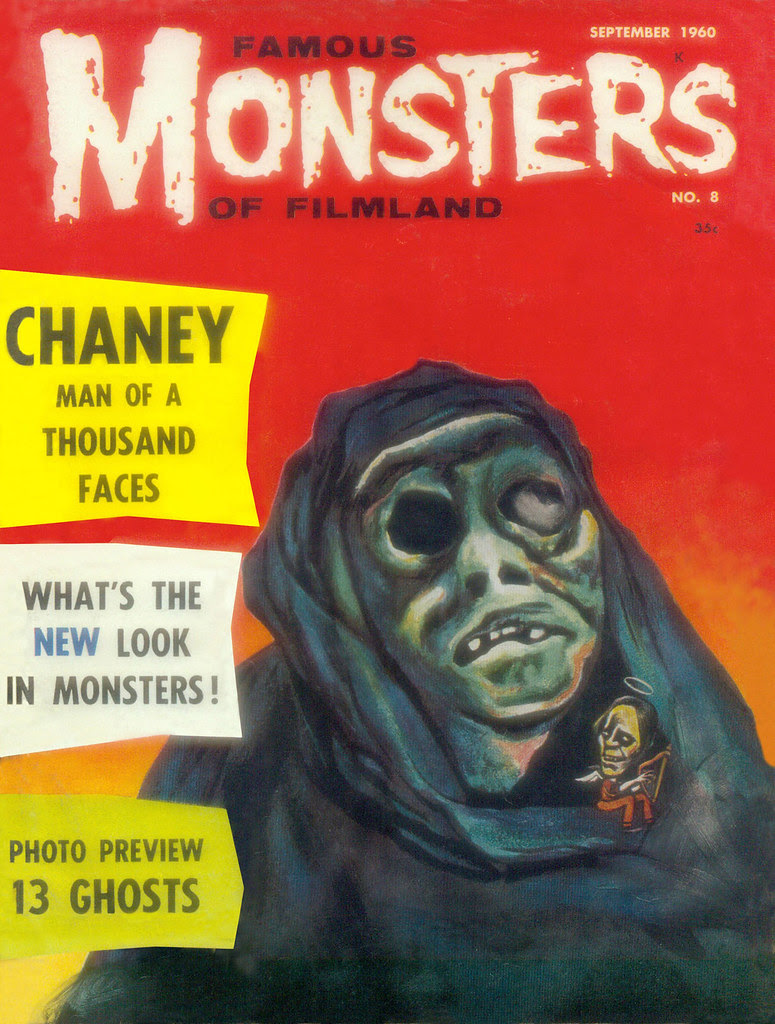 Dog of the Geek: Rock Bottom! 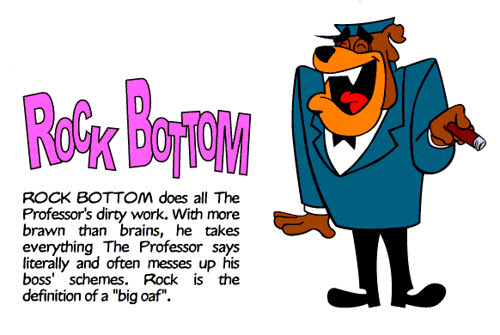 Biography: Rock Bottom was the bumbling sidekick to The Professor, Felix the Cat's arch-foe. Rock has a tendency to take everything the Professor says literally.
Powers: None

Group Affiliation: Sidekick to The Professor.

Miscellaneous: One wonders why the Professor would continue to employ Rock Bottom, given how often he inadvertantly foiled the Professor's attempts to get Felix's magic Bag of Tricks. 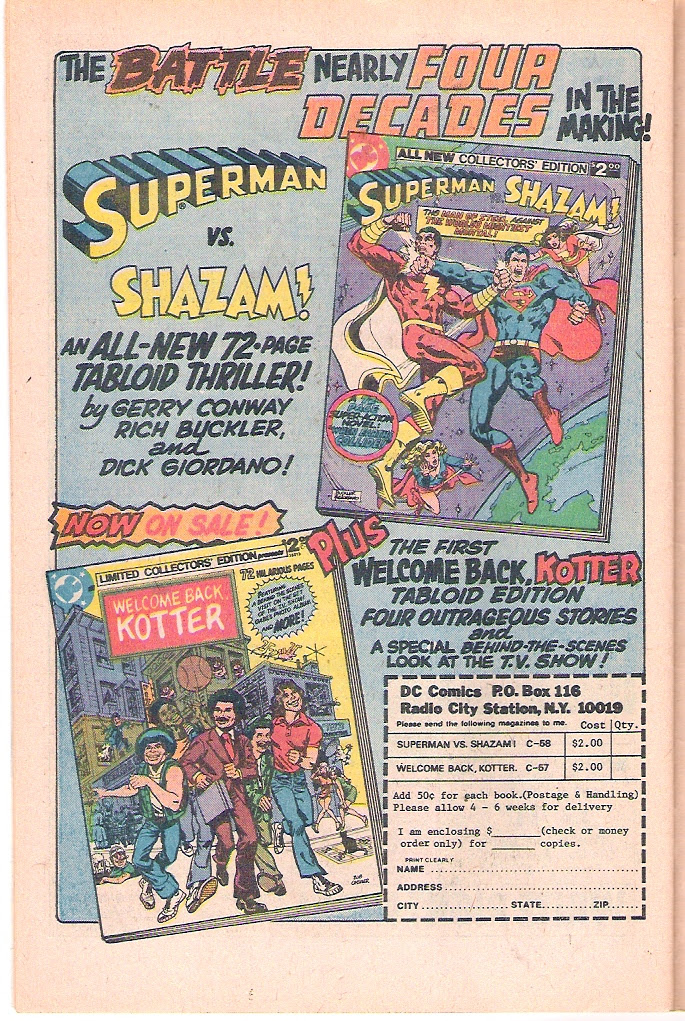 We're still checking out the June, 1978 cover-dated DCs to start this installment, and here's a house ad for the All-New Collectors Edition #C-57 and #C-58, i.e. "Welcome Back Kotter" and "Superman Vs. Shazam!" I know I've featured a few pages of the latter book either here in Original Comic Art, or on the Fortress of Solitude Trophy Room! Definitely a story I'd like to read some day! 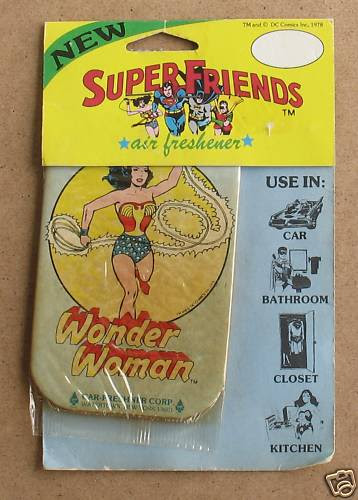 And we're taking a little break from the Super Powers comics... here's a Wonder Woman Super Friends air freshener! Just what scent is "Wonder Woman," anyway? I do have to admit, it brought a smile to my face when I noticed the art for "in the closet"! 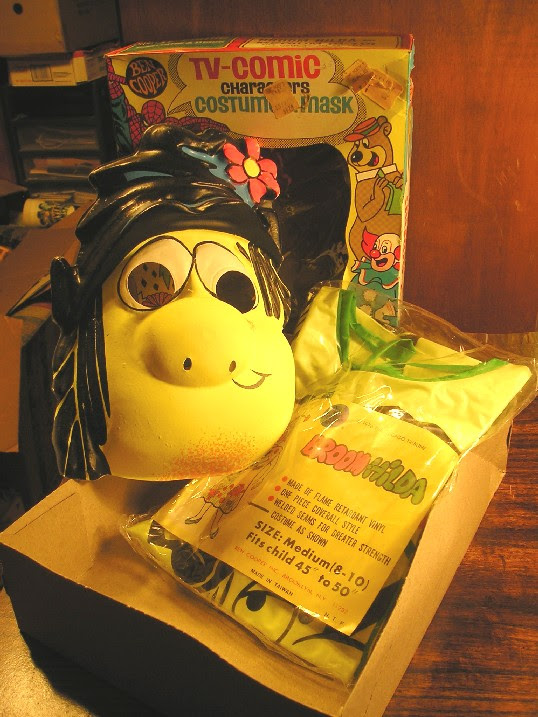 First up this Monster Monday is this Broom-Hilda costume! 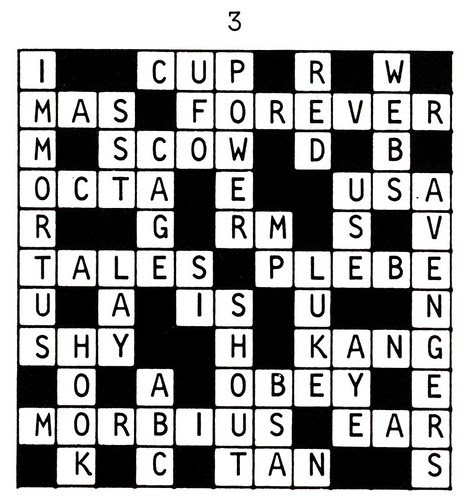 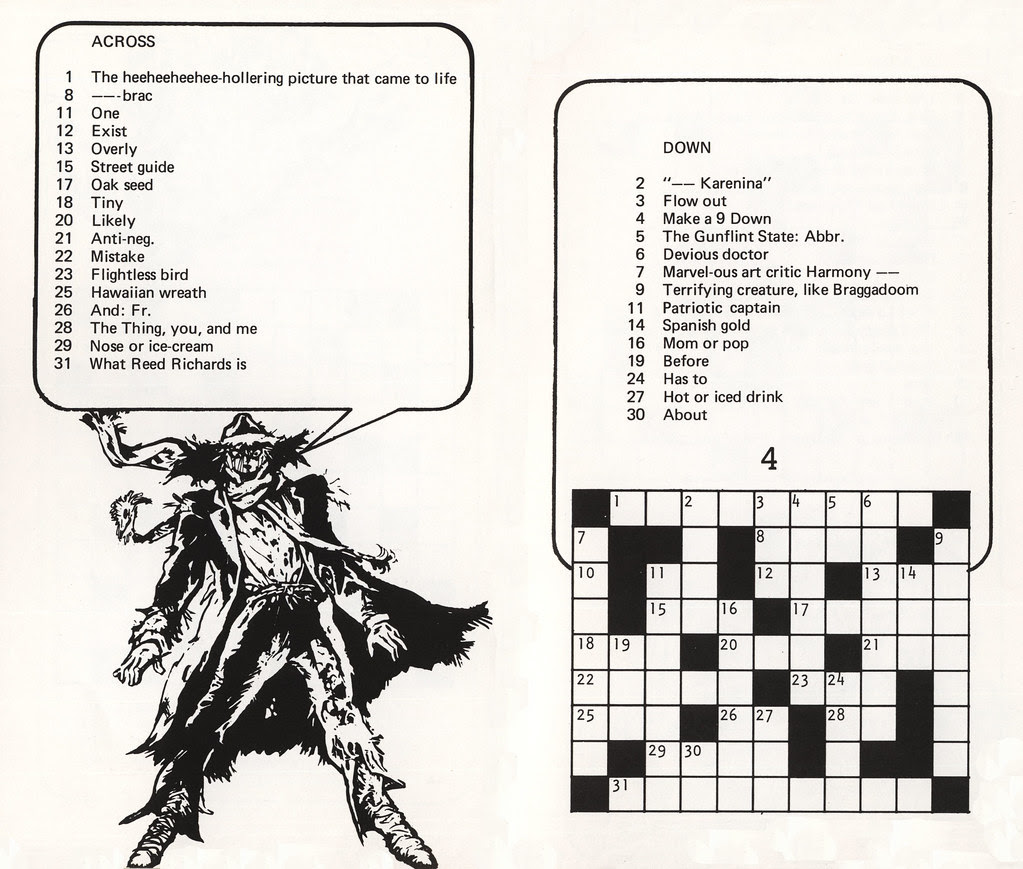 Retro-Review: The Strange World of Your Dreams #1, Part 2

Next, it's “You Sent Us This Dream,” art by Mort Meskin. In this short piece, a woman has been dreaming where she's in a movie house as the feature's ending, and she's leaving, but suddenly finds herself in an elevator that is shooting upward to a remendous height! Suddenly, she finds herself sliding down an enormous slide! Then, she's back in her movie seat again. What does this all mean? Well, let's let Richard Temple, Dream Detective analyze it: 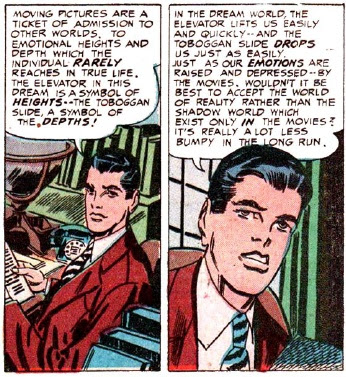 All this is to lead up to a promotion promising readers that if they send their dreams to “Richard Temple” and they are chosen for use in the comic, they'll get $25, which wasn't bad money back then!