First up in this round of Original Horror Comic Art is the cover to Unexpected #10, by Mort Meskin! 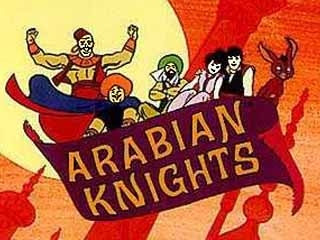 Concept: A band of rebels with special powers or skills team up to battle the evil Bakaar in the ancient city of Baghdad.

Total Episodes: 18
Original Air Dates: 1968-1970
Original Network: NBC
Geek Factor: 7
Characters:
Prince Turhan (Jay North): Rightful heir to the throne of the Sultan, leader of the Knights, and an accomplished acrobat and swordsman.
Princess Nida (Shari Lewis): Cousin to Turhan, master of disguise and excellent mimic.
Raseem (Frank Gerstle): Strongman supreme, he claims to have the strength of 30 men.
Fariek (John Stephenson): Short, tubby, jolly wizard whose spells sometimes go awry.
Bez (Henry Corden): Able to turn into any animal he wishes to by saying “Size of a –!” and saying the name of the animal. 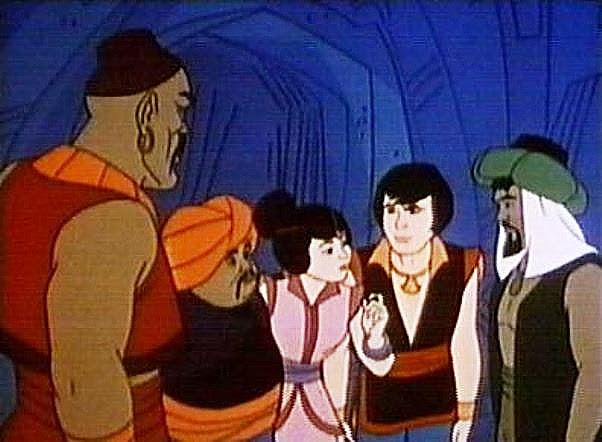 Zazuum (Paul Frees): Small donkey with long ears, Raseem's pet – but don't pull his tail, because then he turns into a miniature tornado that will defeat any enemy or destroy any object!

Bakaar (John Stephenson): Evil ruler of Baghdad who usurped the throne, and his only remaining goal is to destroy the Knights.
Vangore (Paul Frees): Bakaar's main henchman and captain of the guards.
Geek Pedigree: Jay North originated the role of Dennis the Menace on television, and did other voices for cartoons, including Bamm-Bamm Rubble on the Pebbles and Bamm-Bamm Show. Shari Lewis, of course, is best known for her ventriloquism/puppetry act, particularlly with Lamb Chop and Charlie Horse, but she also wrote the Original Series Star Trek episode “The Lights of Zetar.” Frank Gerstle had previously appeared in The Green Hornet, “The Four Skulls of Jonathan Drake,” “The Wasp Woman,” Science Fiction Theatre, “The Magnetic Monster,” and Dick Tracy. John Stephenson also appeared on The Lone Ranger, Science Fiction Theater, The Man From UNCLE, Get Smart, The Invaders, The Six Million Dollar Man and other shows, and did voices for The Ruff & Reddy Show (as the narrator), Top Cat (Fancy-Fancy), Jonny Quest (Dr. Benton Quest), Secret Squirrel, The Flintstones (Mr. Slate), Frankenstein Jr. and the Impossibles (Professor Conroy), Birdman, and many more, including several parts in the 1978 Fantastic Four and Spider-Man and His Amazing Friends. Paul Frees had a long voice career beginning in theatrical cartoons and movies (he was the narrator on “The Deadly Mantis”), then on to television, voicing characters on Mister Magoo, Rocky and His Friends/Bullwinkle Show (Boris Badenov), The Dick Tracy Show, Bozo: The World's Most Famous Clown, The Flintstones, and many others, including doing voices for John Lennon and George Harrison's animated counterparts on The Beatles animated series, the Thing on the 1968 Fantastic Four, and many voices for Rankin-Bass's TV specials and animated films.
Website: http://www.hbshows.com/site.php?c=./arabian.htm
Notes: A most enjoyable series of cartoons! I particularly liked the humor in it.

Of Mice and Magic: The Cartoons #8

By the 1920s, most of the earliest animated studios had closed, leaving Fleischer and Terry (whom we'll get to later), joined by Pat Sullivan. According to Leonard Maltin's Of Mice and Magic (the inspiration and source for this series of posts), Sullivan was born in Australia and eventually made his way to America where he took over William F. Marriner's comic strips after Marriner died (Sullivan was working as Marriner's assistant). Sullivan's first animated film was based on one of these strips, and the series was called Sammie (or Sammy) Johnsin, starting in 1916. Sullivan worked with Otto Messmer, and Messmer's contributions soon outweighed Sullivan's (although Sullivan would continue to take credit for the cartoons even after he barely had anything to do with them).

Sullivan's next series was some Charlie Chaplin cartoons, followed by the Boomer Bill series, but Malton says that Messmer was most proud of "20,000 Laughs Under the Sea," a parody of the Universal feature version of Jules Verne's novel. In 1919, after John R. Bray left Paramount to release his films through MGM, Paramount went to Paul Terry and Pat Sullivan to contribute cartoons for their Paramount Screen Magazine. Messmer created the first of these, featuring a black cat that would become known as Felix, and the first of this series, released in 1919, is Feline Follies!

If you're only familiar with Felix through the TV cartoons, you'll note that he's quite a different cat in these cartoons! Felix wasn't officially named until the second installment, "Musical Mews." At the end of 1921, Sullivan left Paramount to branch out on his own, with Felix cartoons coming out on a monthly basis, beginning with "Felix Saves the Day," released in 1922, and made almost entirely by Messmer.

Countdown to Halloween: Toy of the Week: Jaymar Monster Puzzles!

This week's Toy of the Week are actually four toys... with variations, even! It's the Jaymar monster puzzles! Based on the Universal Monsters, these early 1960s puzzles are absolutely gorgeous, and highly collectible! 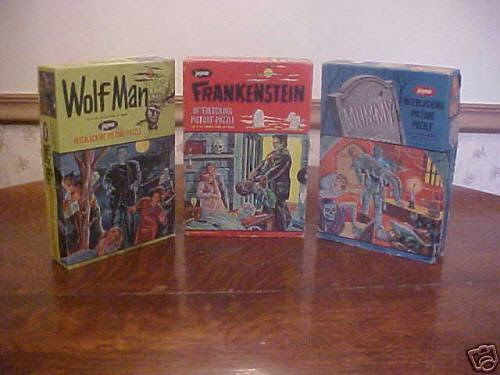 Here's three of them, just as a sampler of what lies after the jump!


Next: Another Chad Valley set, featuring Alice in Wonderland... but not the Disney version!

Man, sometimes I think I should really count how many Cool Stuff photos I've posted so far... I can tell you that (with this) I have 1,027 posts with that label on them! Anyway, this installment starts out with a reissue poster for 2001: A Space Odyssey! 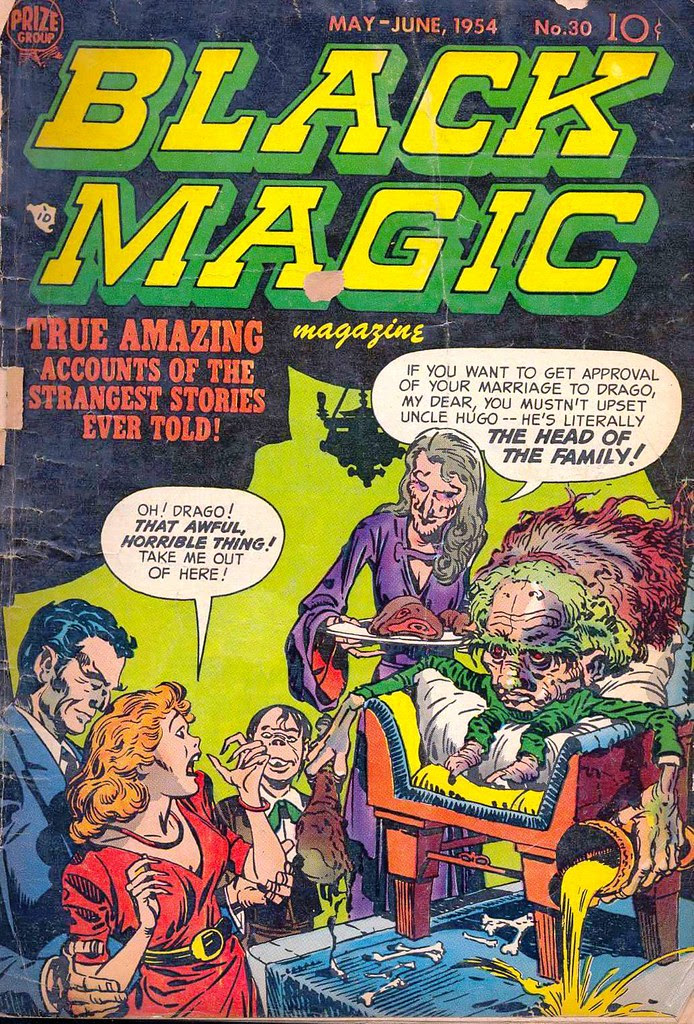 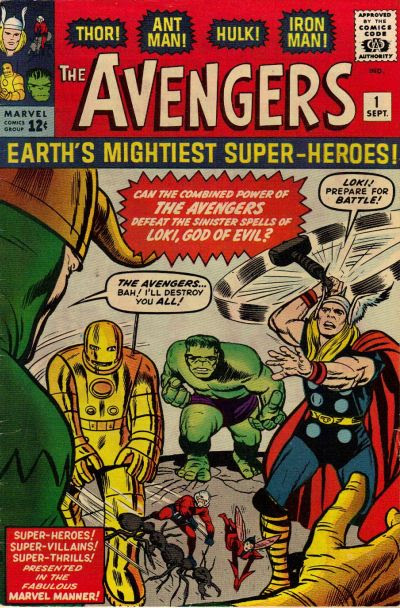 Title: “The Coming of the Avengers!”

Fantastic Monsters of the Films #7! 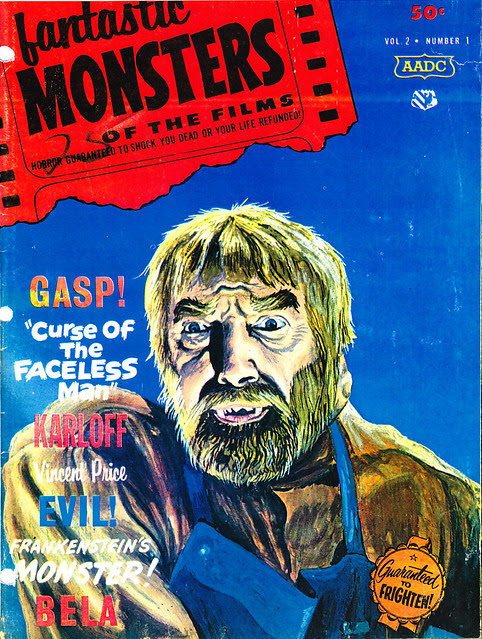 This week's ads come from Gold Key's Hanna-Barbera Fun-In #9, and it will start off looking like there's a theme! 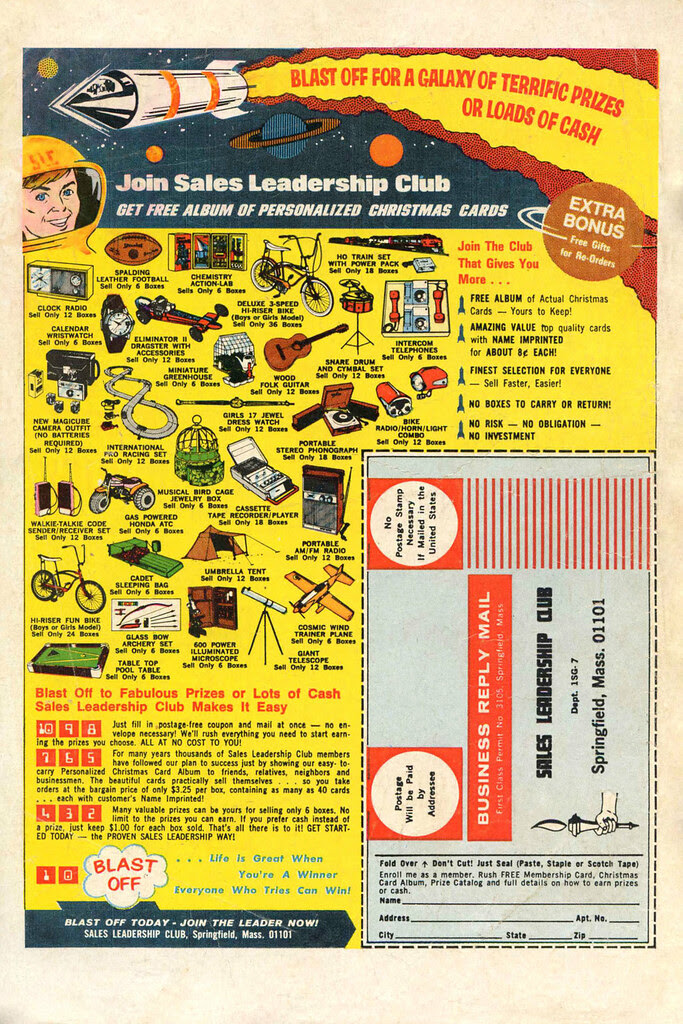 First up is this ad for the Sales Leadership Club, which as you can see offers fabulous prizes, and all you have to do is sell their Christmas Cards door-to-door! Man, these kind of ads used to be in about every single comic book, so obviously some kids were responding to them, and were also successful enough that these companies could stay in business and keep paying for the ads. You'll note the rather prominent rocketship at the top of the ad... yet there is really nothing like a rocketship being offered as a prize! 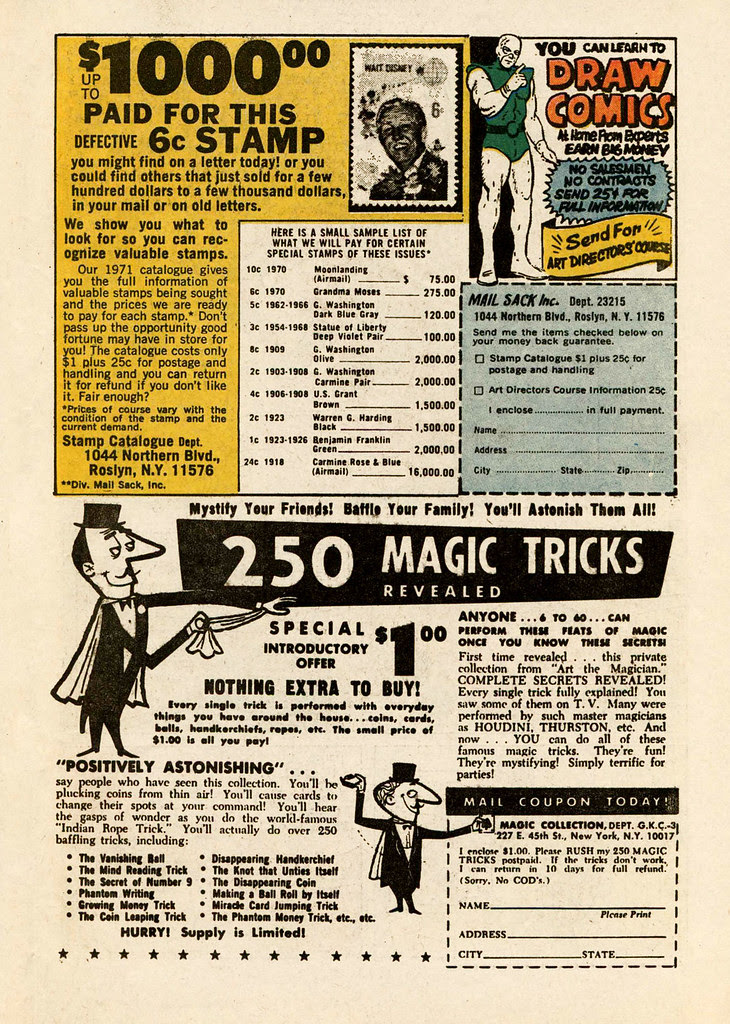 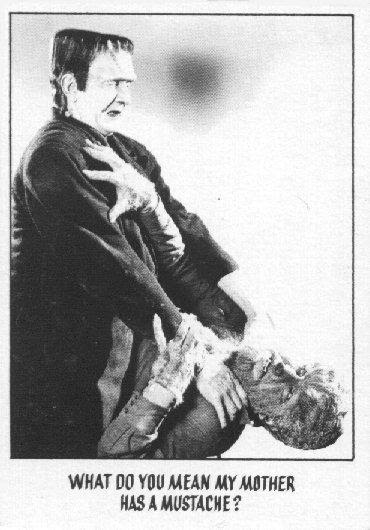 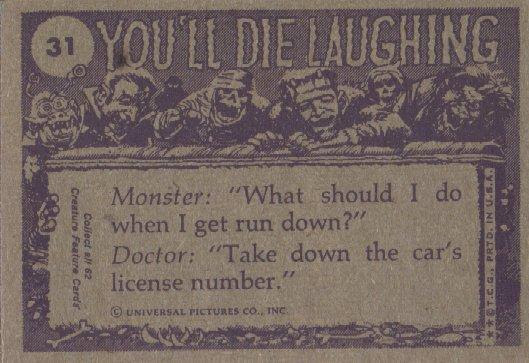 When last we left the Caped Crusdaders, they had built the Bat-Boat in order to counter the nefarious crimes of the Frogman! But little do they know, Frogman has his own secret weapon to deal with Batman and the Boy Wonder! And now, let's look in on Frogman's next caper! 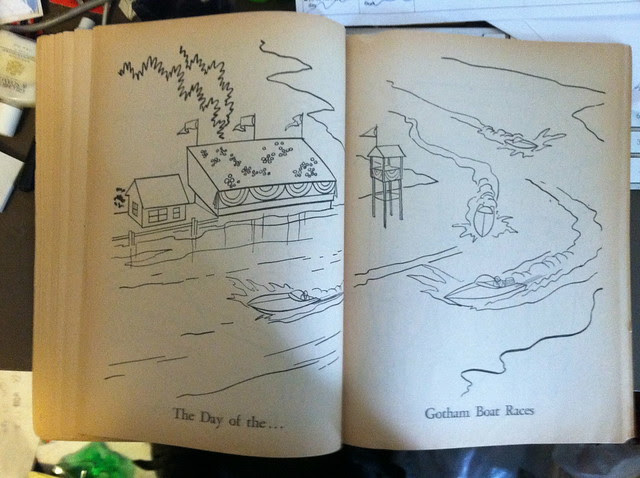 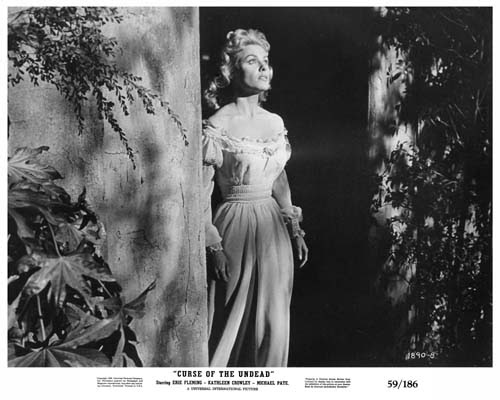 This week's Monster Monday begins with this moody still from Curse of the Undead!

Dog of the Geek: Bolt! 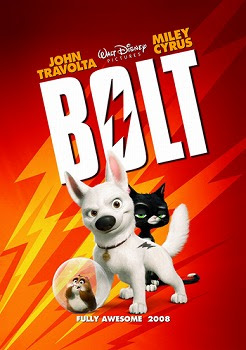 Breed: Generic, but loosely based on American White Shepherd.

Biography: Bolt is a small white dog who stars in the eponymous tv show Bolt, in which he portrays a super-powered dog. In order to get him to act on the program, he's been led to believe that he actually has super-powers, and that the filmed adventures are real – so he has to keep saving a girl named Penny to thwart the plans of Doctor Calico. One day, Bolt escapes his trailer because he believes that Penny has actually been kidnapped. He manages to get accidentally shipped to New York from Hollywood, where he meets an alley cat named Mittens, teaming up with her to return to Hollywood (without Mittens being okay with the idea at first). Bolt is confused by the apparent loss of his superpowers, figuring that exposure to styrofoam has removed them. Meanwhile, a Bolt lookalike is found to replace Bolt for filming. Bolt and Mittens have several adventures, including being captured by Animal Control, and teaming up with Rhino, a hamster who is a huge fan of Bolt's TV show. The trio arrive in Hollywood, arriving on the set in time to see Penny embracing Bolt's replacement. This causes Bolt to think Penny never loved him, but Mittens discovers otherwise. When Bolt's replacement accidentally causes a studio fire, Bolt manages to rescue Penny with the help of the fire department. Later, Bolt and Penny both quit the show being replaced with new actors. Bolt, Penny, Mittens and Rhino enjoy their new life together.

Powers: On the TV show, Bolt has a number of super-powers, such as super-strength, laser vision, super-speed, and a super-bark.

Miscellaneous: The original treatment for this movie was American Dog, with a roughly similar plot (without the super-powers). I have no idea why DC Comics or Warner Bros didn't sue Disney over Bolt, given that the TV version of Bolt is very close to Krypto the Superdog, with Streaky the Supercat's lightning bolt marking.

Email ThisBlogThis!Share to TwitterShare to FacebookShare to Pinterest
Labels: dog of the geek, genre movies 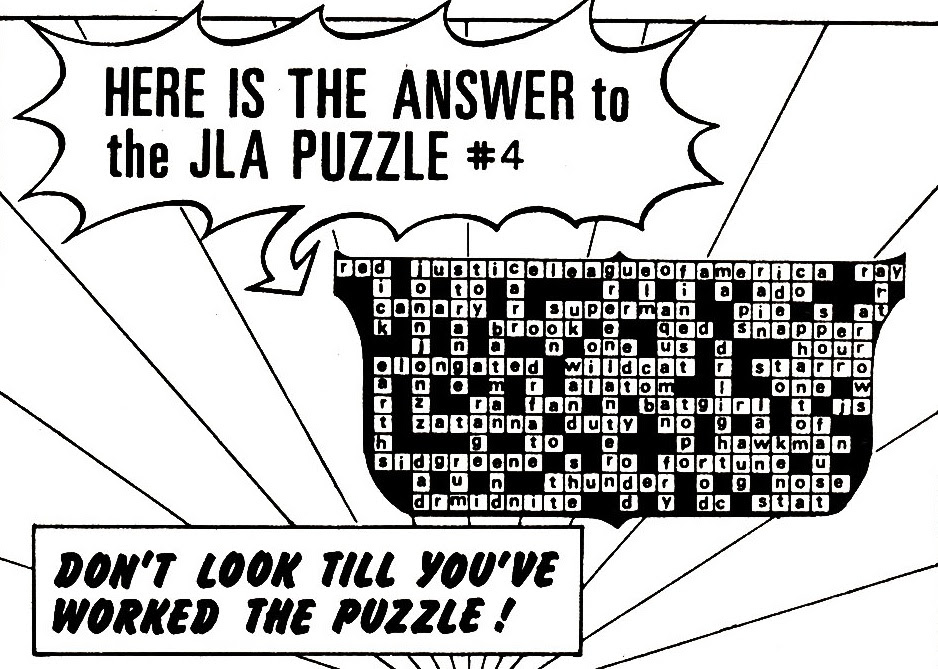 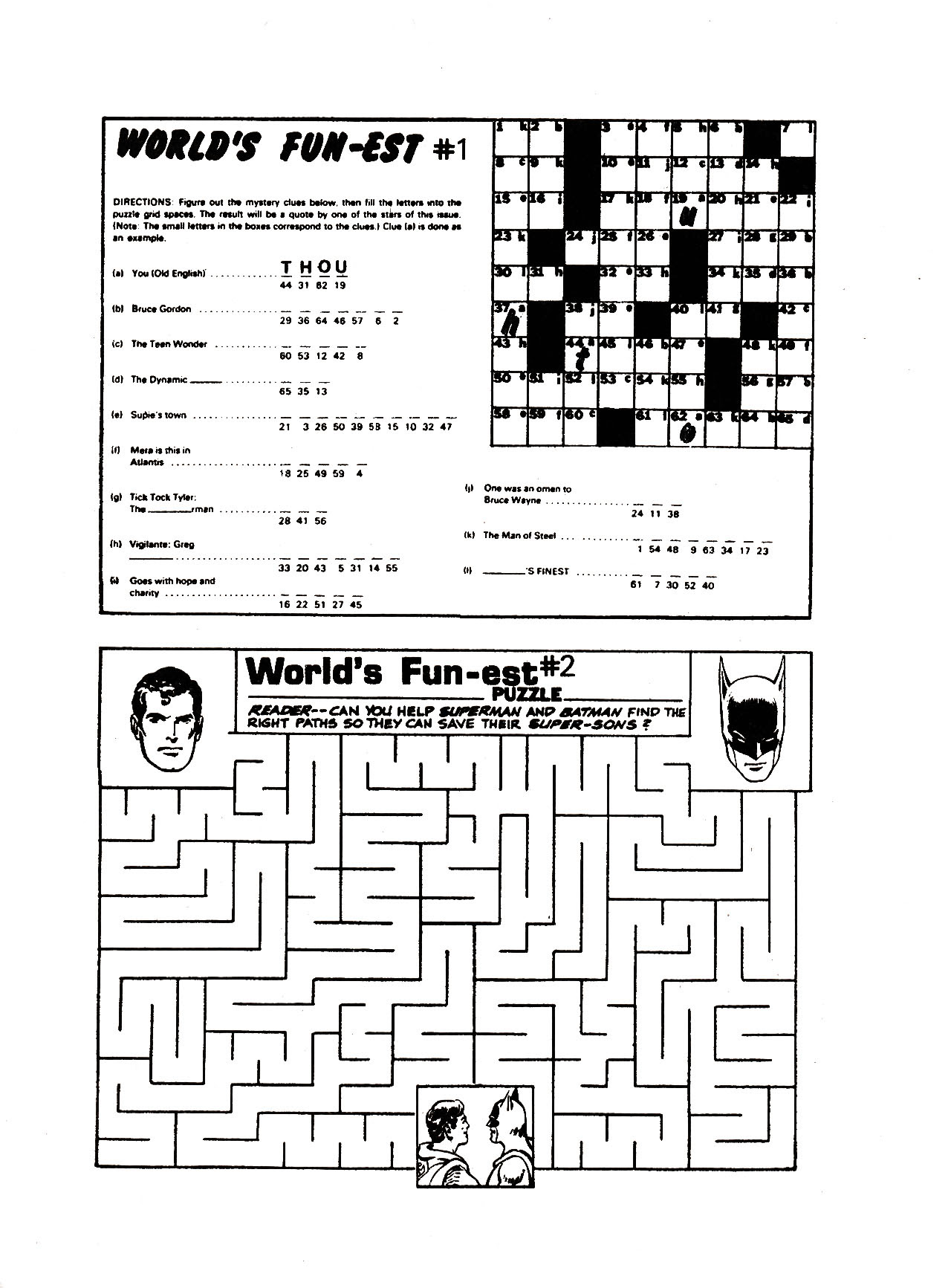 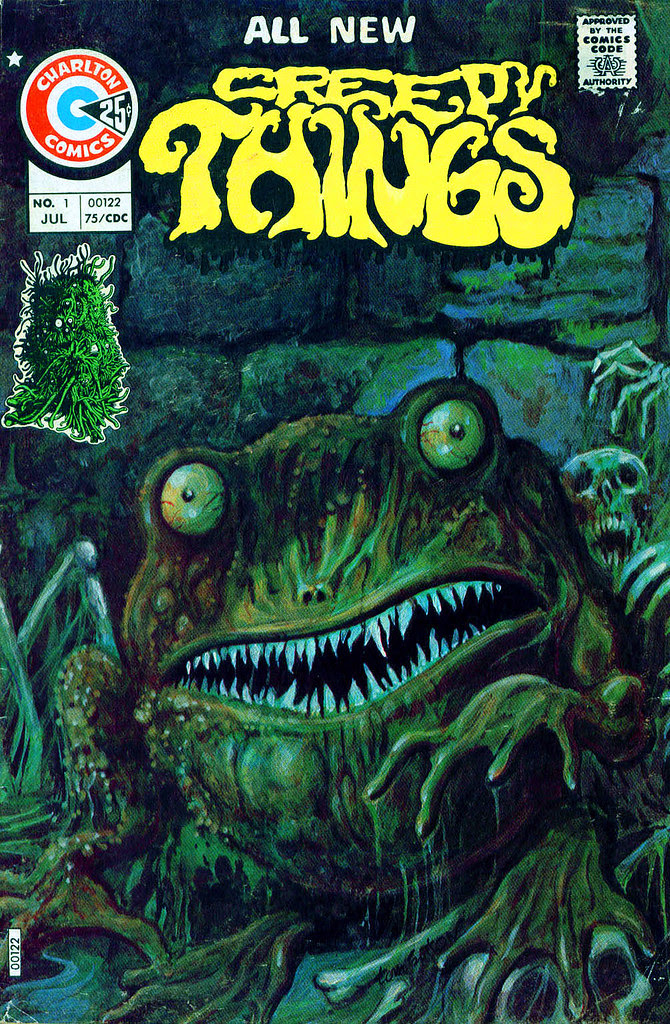 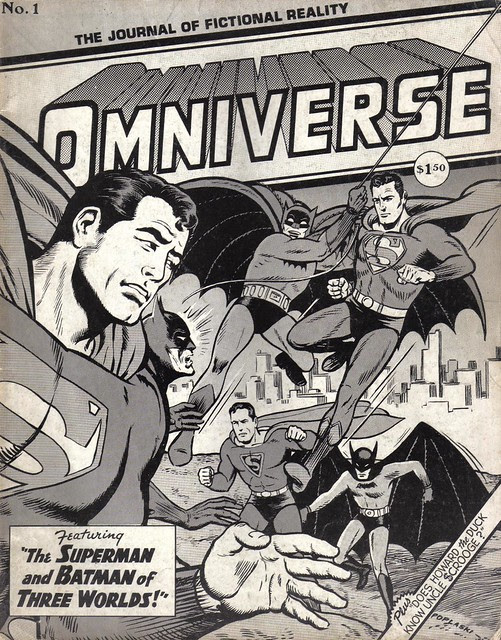