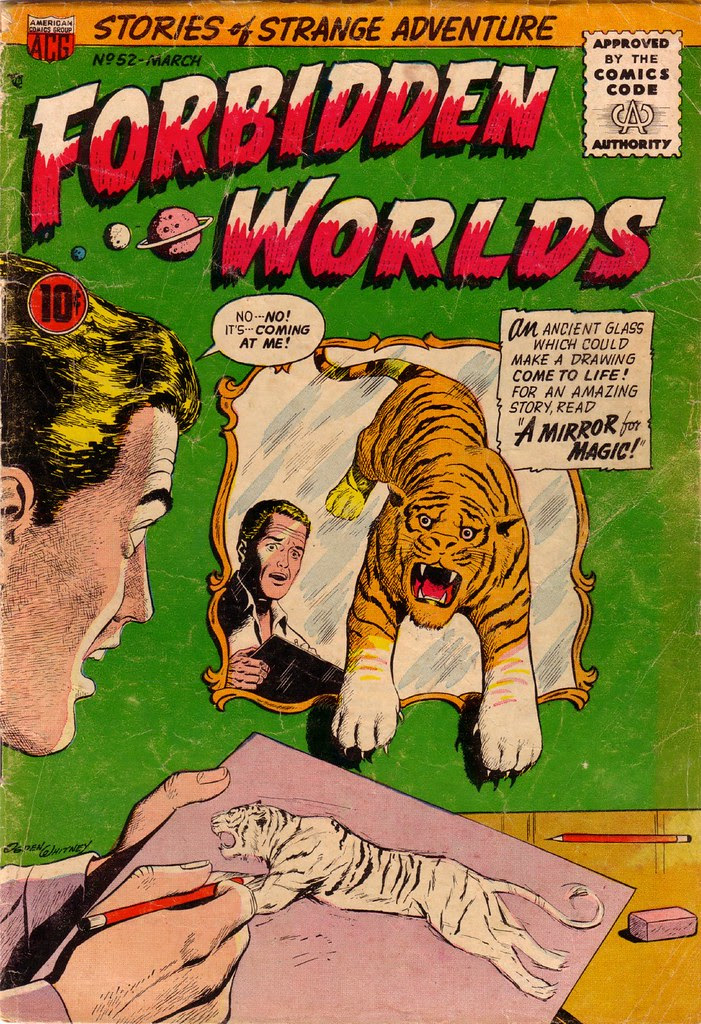 To read this comic, do the clicky thing! 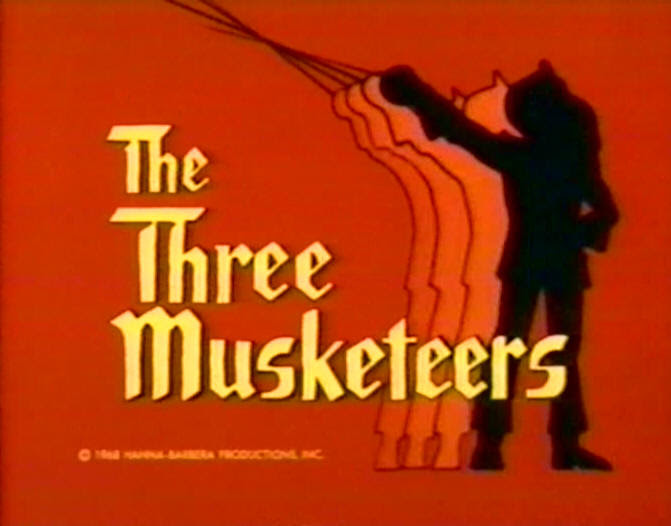 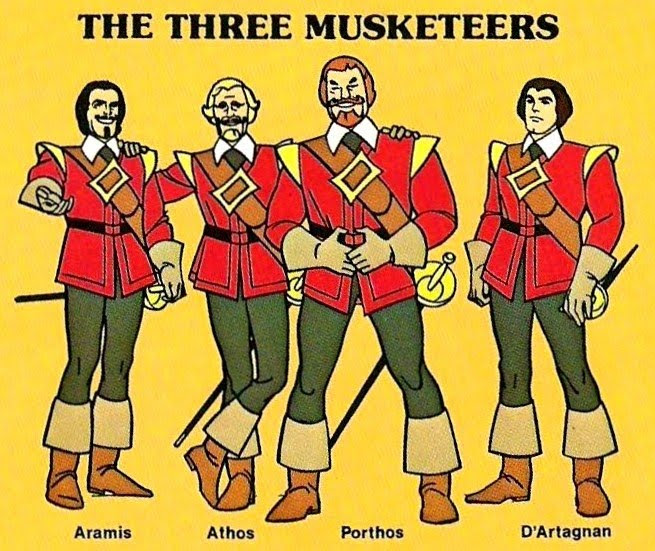 Geek Pedigree: Bruce Watson also appeared as “Green” in the Star Trek Original Series episode “The Man Trap,” voiced Phineas Fogg on a segment of The Cattanooga Cats, and guested on Mission: Impossible and The Magician. Barney Phillips was also the voice of Shazzan the Genie, and had guested on The Wild Wild West and I Spy. Julie Bennett had guest-starred in The Adventures of Superman, and also did voices for a number of animated series, particularly the role of Cindy Bear on The Yogi Bear Show and Aunt May Parker in the 1997 Spider-Man animated series. Ted Eccles played Brad on Dr. Shrinker. Don Messick was the voice of Dr. Benton Quest and Bandit on Jonny Quest, Blip, Bronto and Zorak on Space Ghost, Multi Man of the Impossibles, Atom Ant, Shag Rugg, and Precious Pupp on The Atom Ant Show, Falcon 7 and others on Birdman, Gloop and Gleep on The Herculoids, Kuurgo on the 1967 Fantastic Four, Kaboobie the Flying Camel on Shazzan, Muttley and Professor Pat Pending on Wacky Races, and many other roles, but he's probably most famous for originating the voices of Astro and Scooby Doo! Messick also did voices on the 1978 Fantastic Four, Challenge of the Super Friends, Godzilla, the 1982 Spider-Man series. And of course, Jonathan Harris was in Lost in Space and Space Academy, and also did voices for the 1997 Spider-Man, Freakazoid, The Mask, BraveStarr, Visionaries, Rainbow Brite, Battlestar Galactica, and other shows, plus did a number of other TV roles... although I'd imagine he would have loved to have forgotten playing Basil Bitterbottom on Uncle Croc's Block.

Website: http://www.hbshows.com/site.php?c=./hb2/musketeers.htm is the Musketeers page for HBShows.com, and is probably as good as you'll find!
Notes: Did not really care as much for this as “Arabian Knights,” probably because Tooly was annoying.

Of Mice and Magic: The Cartoons #9

This week, we're looking at a few more Felix the Cat cartoons mentioned by Leonard Maltin in his book!

First up, "Whys and Otherwise," where you can see how Felix is being treated on screen as a film star!


Next, "Felix in Hollywood," where Felix encounters Charlie Chaplin!


And finally, "Comicalamities," where Felix interacts with his animator!

Countdown to Halloween: Toy of the Week: AHI Super Monsters! 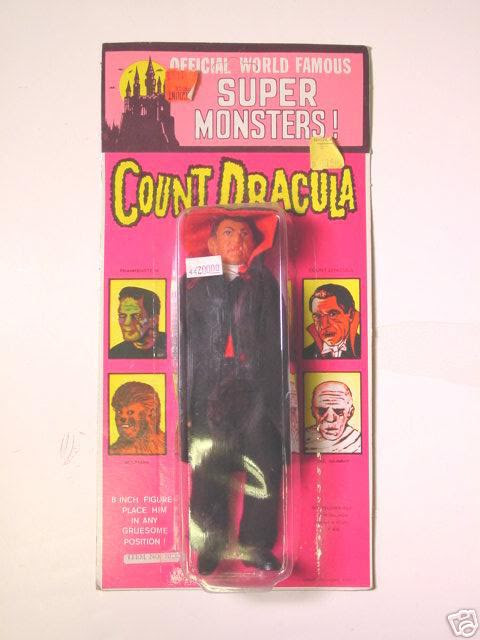 Now, anyone who's ever read anything about Mego (manufacturers of the World's Greatest Superheroes 8" and 12" figures, Star Trek, Planet of the Apes, and more) will point at their failure to acquire the Star Wars license as being the downfall of the company, and certainly, that was the biggest mistake Mego ever made in doing business. However, the lack of foresight didn't begin and end with Star Wars, in my opinion... it began with the classic monsters: Frankenstein, Dracula, the Wolf Man, and the Mummy. Rather than pay the licensing fees that Universal was asking for, they decided to pass on it. Remco parent company AHI, on the other hand, knew a good thing when they saw it, and snapped up the license right away, leaving Mego to counter with their "Mad Monster" line (the same characters, but without infringing on Universal's designs). AHI produced their "World's Greatest Super-Monsters" line up completely copying Mego's card design for the Superheroes, and created a line of monster action figures that's in high demand! Above, you see their Dracula figure. You'll note that it doesn't really resemble either Bela Lugosi, Lon Chaney, Jr., or John Carradine, for that matter... so why pay the fee to license? Ah, you'll see...

OK, so I decided to do the Chad Valley 1974 Alice in Wonderland Sliderama set in two parts (I'll be following it up with a two-parter based on Disney's Robin Hood next week). According to the wonderful Chad Valley Give-A-Show site (the owner of which has graciously allowed me to use his scans of the Chad Valleys slides) has this to say about the set:

Based upon the 1972 Joseph Shaftel film production of Alice's Adventures in Wonderland, this set tells an entire story, rather than being a collection of 32 short snippets as seen in previous sets.

Hence, doing it in two parts! I would've done it in one, but it was longer than YouTube allows!

Before we get into part two, I should mention that the music (for the most part) on both parts came from a two-disc LP called "Alice in Wonderland, A Musical Fantasy." The album was independent of the version this set is based on, but I thought it worked!

And first item on hand to look at this week is this pair of rings from Argentina, year of manufacture unknown. They look kind of like vending machine items to me! 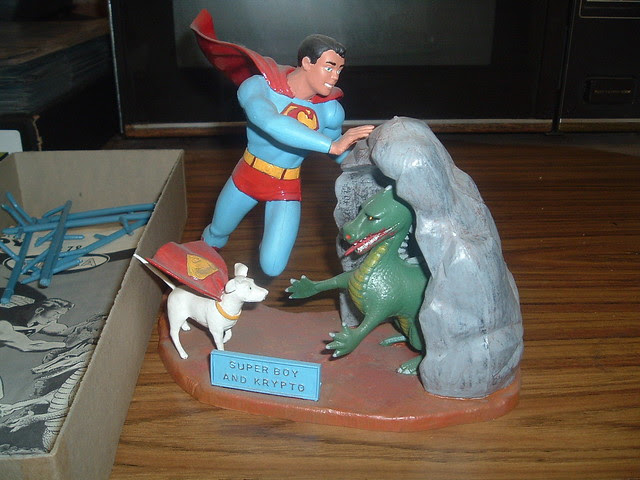 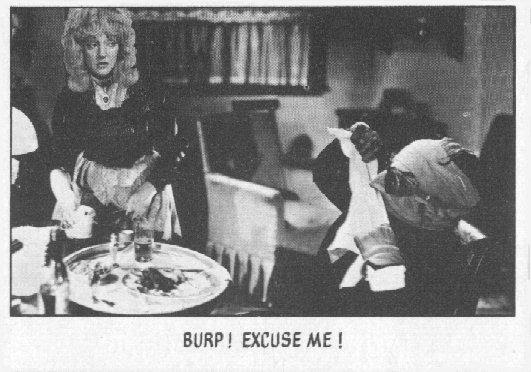 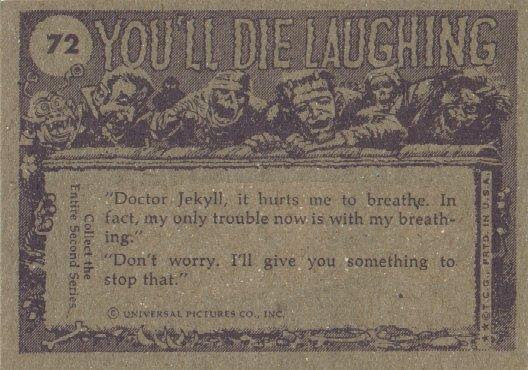 By the way, I don't know if anyone's commented on this (since I'm working on these posts in July), but there's a lot of these cards with some new faces pasted into them... I don't know if it was likeness rights or what, but it's certainly bizarre! 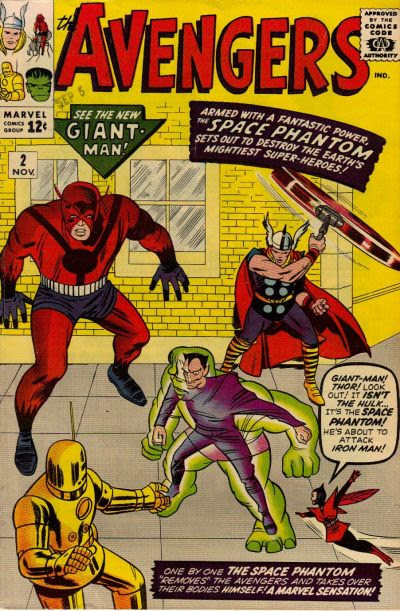 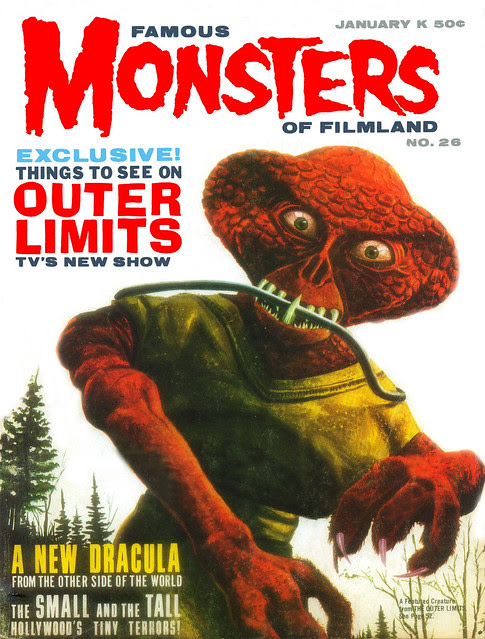 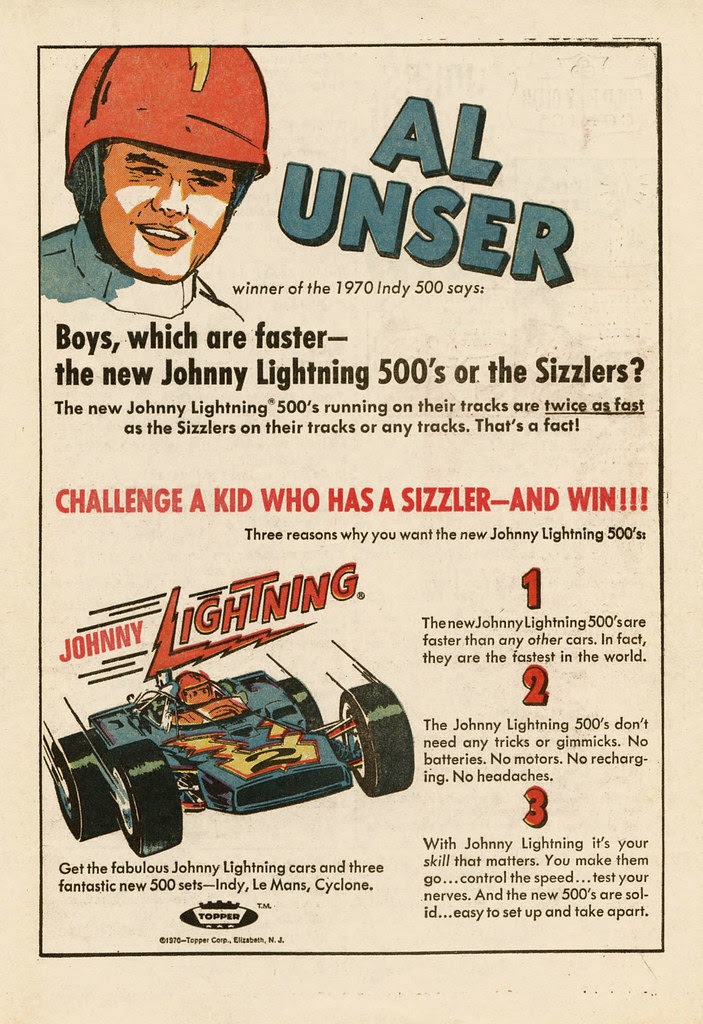 Countdown to Halloween: Adventures into Terror #10! 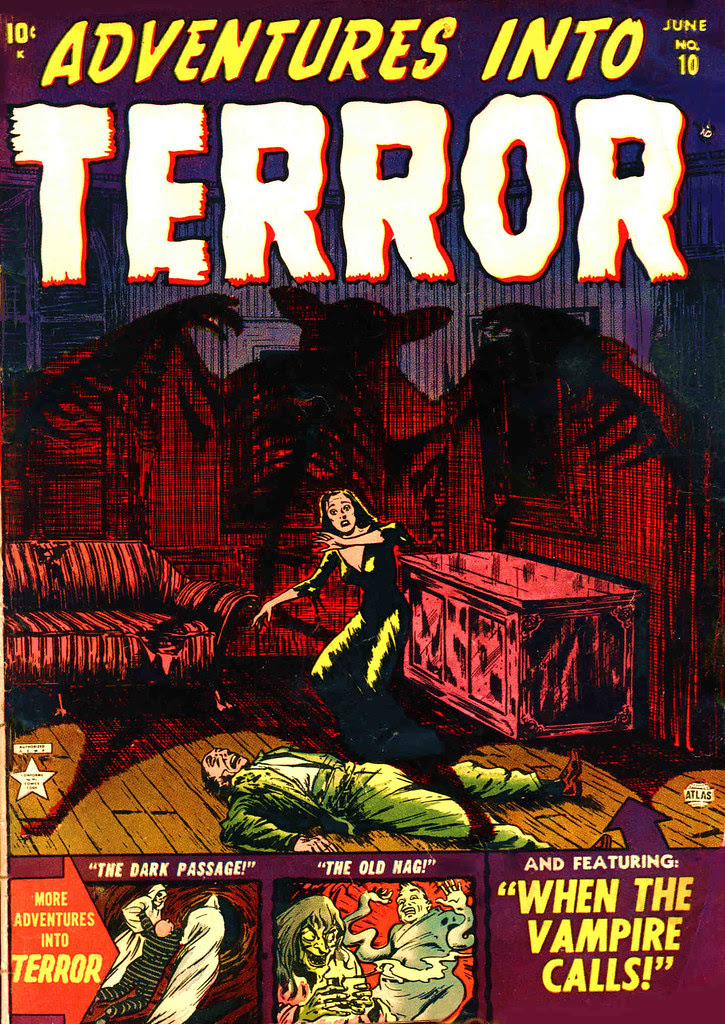 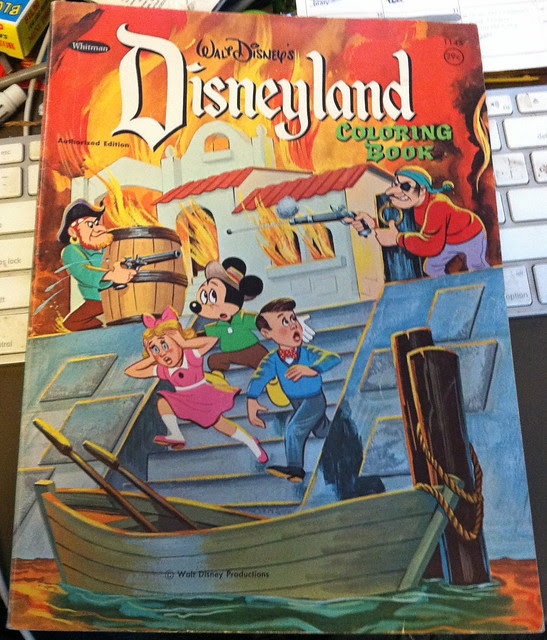 This week's edition of Children's Book Theatre features the first part of a 1968 Disneyland coloring book, featuring the adventures of two nameless children as they have fun at Disneyland, joined by Mickey Mouse! Despite the cover image, they don't really interact with the Pirates of the Caribbean ride characters (although something like that, with them actually having adventures as part of the attractions, would've been interesting). 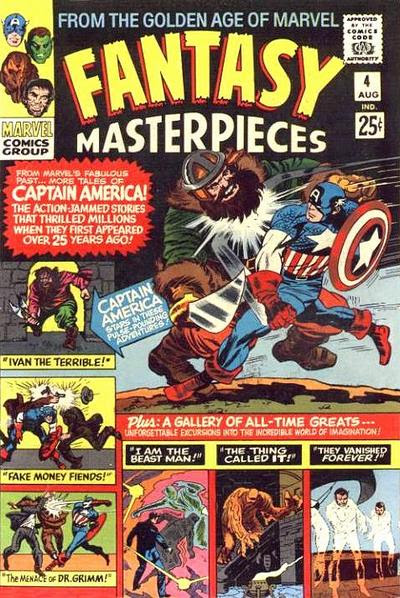 First up this week is the cover to Fantasy Masterpieces #4, one of Marvel's reprint titles of the Silver Age. What makes this an unusual entry in this series is that it is a reprint title, which typically just used reproductions of panels or splash pages from the stories within (look at the Cap panel on the lower left corner -- definitely more of a vintage style to it). I recall reading somewhere the reasoning for having Kirby do a new piece of art for this cover, but forget the details. One of the great things about this is that I've looked at this cover over and over again in the past, but this is the first time I've noticed that Cap's body is contorted into what should be an extremely painful position! If you don't see it, look at the legs compared to the torso and Cap's belt buckle. The thing is, the image is just so dynamic, you don't pay attention to things like that! 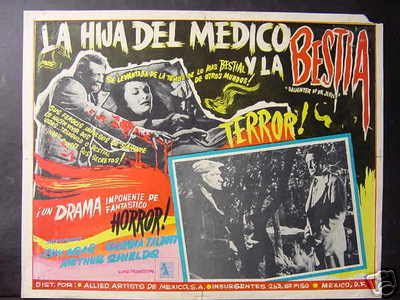 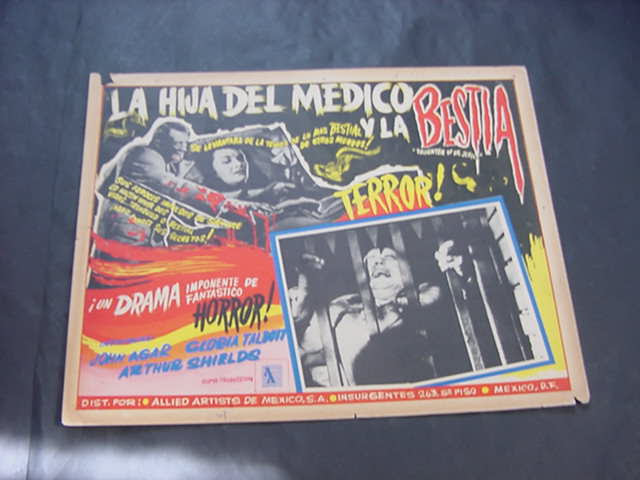 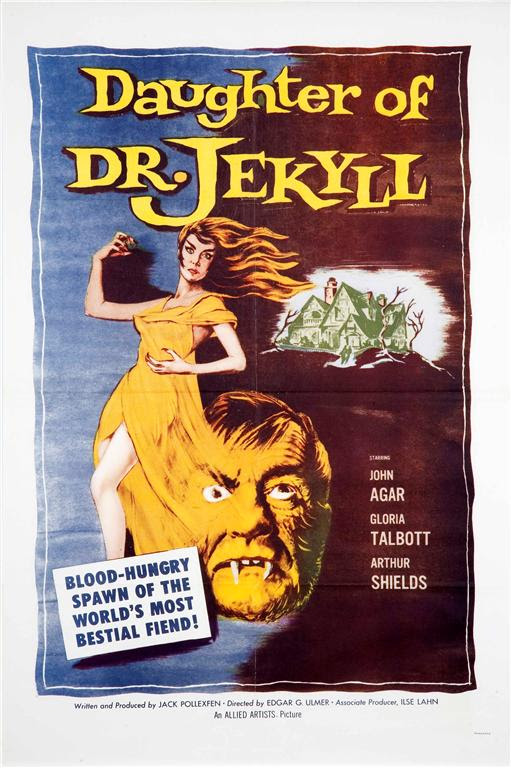 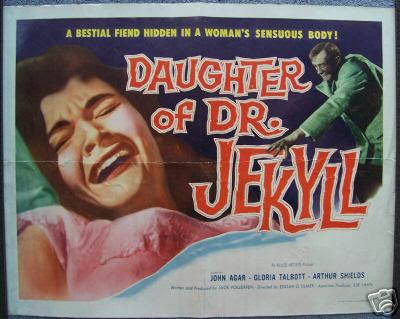 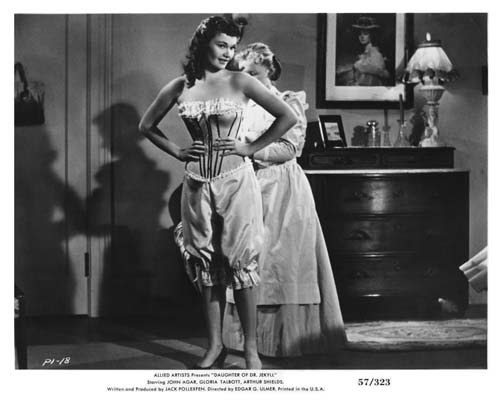 This week's Monster Monday begins with two Mexican lobby cards, two US posters, and a still from Daughter of Dr. Jekyll!

Dog of the Geek: Fleegle! 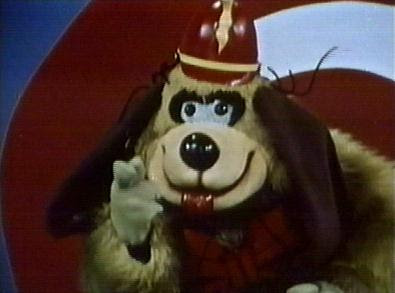 Biography: Fleegle is more or less the leader of The Banana Splits Club, and played the guitar. Despite his efforts, things tended to go out of control with bandmates Bingo (a gorilla who played the drums), Drooper (a lion who played guitar), and Snorky (an elephant keyboardist). The Splits were rivals of the Sour Grapes Gang, who delivered messages via the “Sour Grapes messenger girls,” who would dance into the clubhouse wearing purple minidresses, pink leotards and black go-go boots, intimidating the Splits until they gave the message to Fleegle. No matter who played the messenger girl, she was always called “Charlie.” The Splits were also visited by the Dilly Sisters (an actual musical act from Mexico) who would play guitars and sing “The Mexican Hat Dance” or “Ta-ra-ra Boom-de ay.” Fleegle also served as reporter for Banana Splits News. Fleegle had an alter ego called “The Great Fleegali,” whom would attempt to perform magic tricks unsuccessfully.

Miscellaneous: Jeff Winkless (billed as Jeffrey Brock) portrayed Fleegle in costume; the voice was provided by Paul Winchell. In the 2008 version, Bill Farmer did the voice. Fleegle's costume (as was the rest of the Splits) was built by Sid and Marty Krofft.

This should finish off the Creature Features cards! 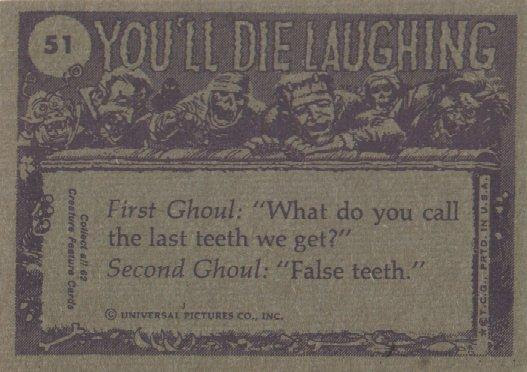 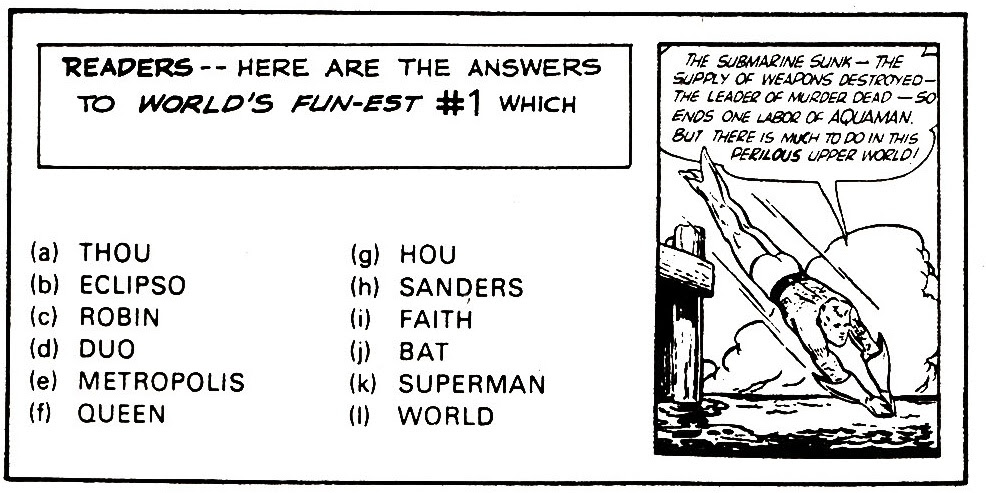 I guess you'll figure out the maze on your own, eh? 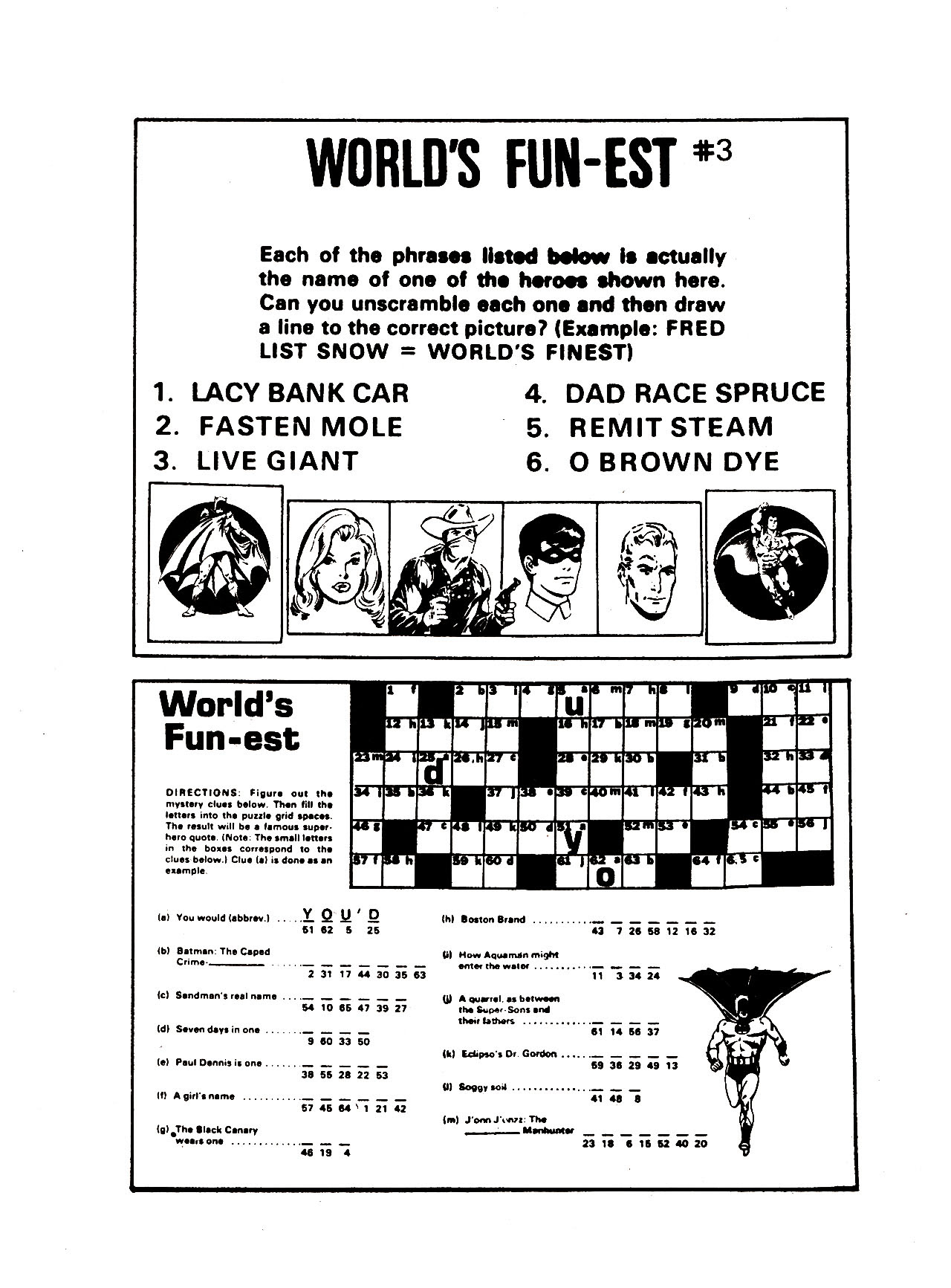 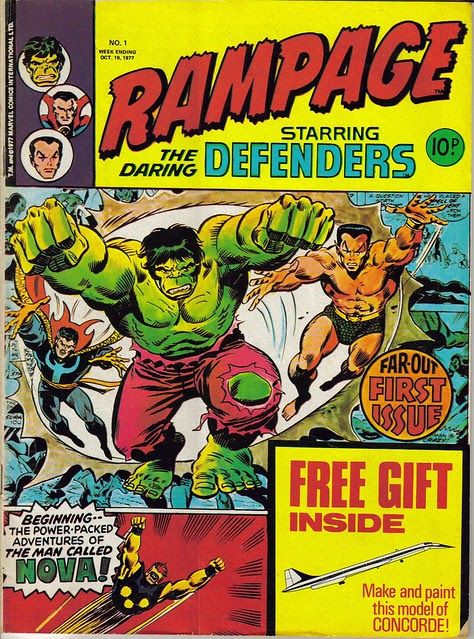 As many of you know (certainly Manic Man, for one), until relatively recently, Marvel Comics weren't published in the same format in the UK as they were in the USA. Often, there would be color covers on the UK books, with black and white interiors. Some of the books would be monthly, some weekly (were there any biweekly books?). Because of the formatting, sometimes a story would be split between two issues, with a new splash page for the second part created. And sometimes, there would be a title that was completely different from anything Marvel did in the USA, for purposes of creating a nice variety of features inside. Here's Rampage #1!