Of Mice and Magic: The Cartoons #10

In the first nine installments of this series, we looked at silent animated cartoons, ending with Felix the Cat. When sound came along, it spelled the end for Felix, as well as other cartoon characters, but opened the door for many others. Of course, you probably already know that Walt Disney is recognized for making the first sound cartoon, but we need to look at some of his stuff prior to that first, don't we?

Disney's first successful cartoon series was his "Alice" series, featuring a live-action Alice against an animated background! Here's one of them, "Alice Solves The Puzzle." Most of the sound on this was added well after production, I believe.


Disney's second successful cartoon series starred Oswald the Lucky Rabit, which he did for Universal. Here's one of Disney's Oswald cartoons, "Trolley Troubles." As with the Alice cartoon, the sound was added for re-release.


With Oswald being such a success, Disney wanted to spend more money on each cartoon, but when he went to see Charles Mintz, who operated the distribution company, Mintz not only refused to give him more, he also told Disney he'd take Oswald and the key animators away from Disney. Of all the animators working with Disney, only Ub Iwerks stayed loyal. The two of them together came up with Mickey Mouse (Ub designed the early Mouse) and used him in two silent cartoons, "Plane Crazy" and "Gallopin' Gaucho," with little response. Thanks to The Jazz Singer and its success with sound in 1928, Disney decided to look at adding sound to his cartoons, and a test was made with the completed scenes from the third Mickey cartoon, and the test audience responded very strongly. A few months later, the cartoon was completed and released with sound, and it was a sensation. Of course, I'm talking about "Steamboat Willie"! 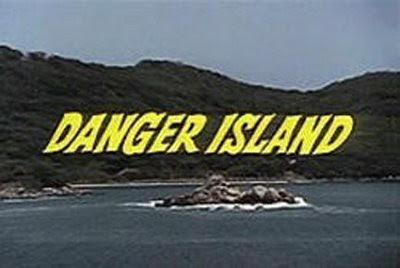 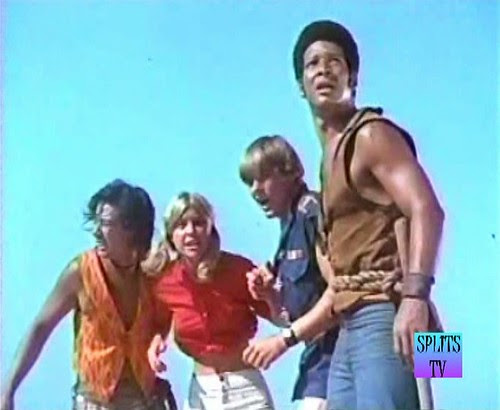 Geek Pedigree: Don Messick's career was mentioned before. Kim Kahana's career outside of Danger Island was mostly doing stuntwork, some of which can be seen in “The Omega Man,” “Soylent Green,” The Six Million Dollar Man, and “Doc Savage: The Man of Bronze.” Frank Aletter appeared in bit parts for a number of genre TV shows, and was Mac on It's About Time. Jan Michael Vincent had the title role in “The World's Greatest Athelete,” was Tanner in “Damnation Alley,” and was Stringfellow Hawke in Airwolf. The serial was produced by Richard Donner, who later went on to helm “Superman: The Movie.”
DVD Release: None
Website: None that I could find, although if you want to watch the entire series, you can find it on my old Saturday Morning Superstars blog at http://saturdaymorningsuperstars.blogspot.com/search/label/Danger%20Island
Notes: “Micro-Ventures” were fun, although I thought there were more of them! “Danger Island” was an extremely fun serial, and I know for years after it originally aired, kids were shouting “Uh-oh, Chongo!” all over the place!
Posted by Jon K at 12:01 AM No comments: 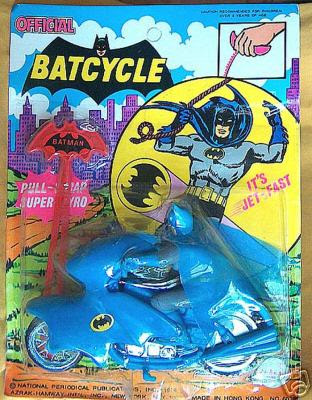 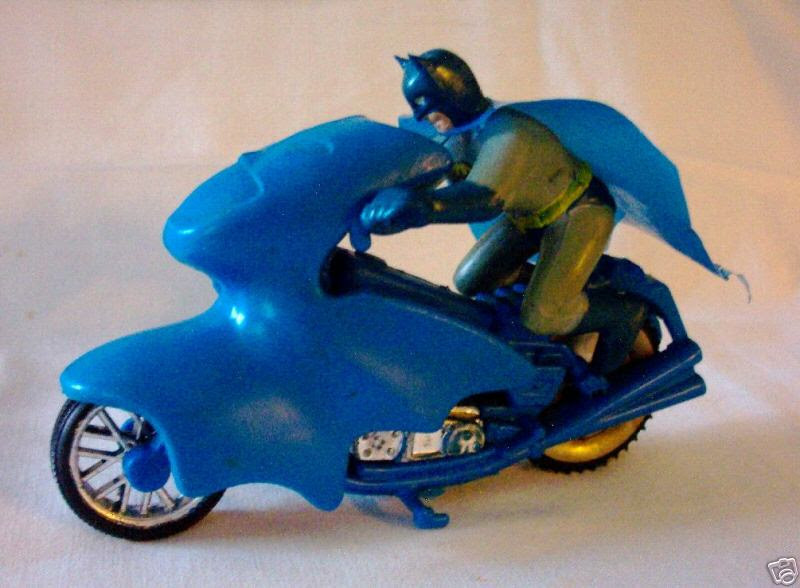 One of the things that AHI did very well with Batman was to produce some excellent Batcycle toys, and there was a pretty decent variety of them, too! Above, you see a Batcycle that's sort of like Kenner's SSP toys, in which you'd insert a zip cord, then pull it to get the gyroscopic wheel spinning, and then let it go! 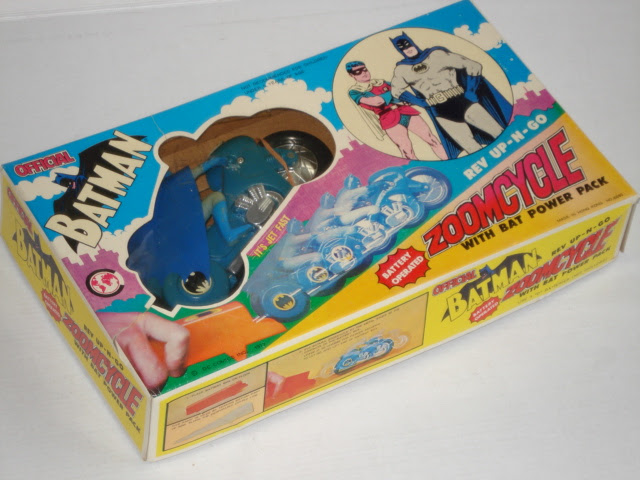 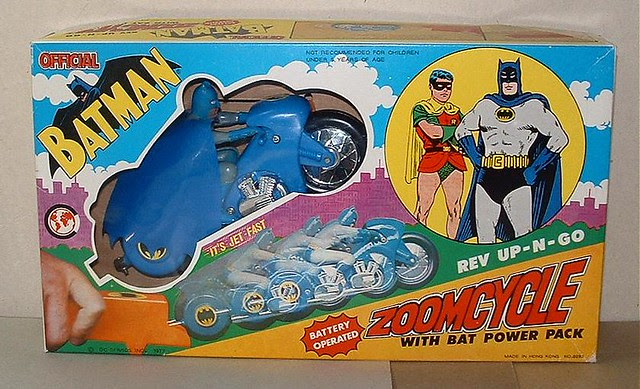 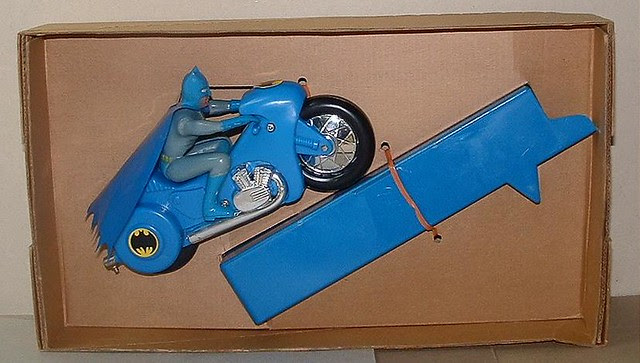 This "Zoomcycle" was another variation it seems, save that this one used a battery-powered gadget to impart the speed into the gyro! 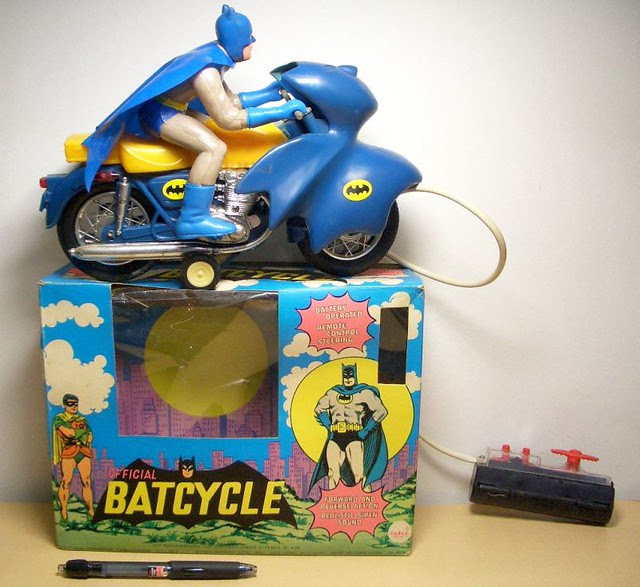 Here's their remote-controlled Batcycle, and you can see that the Batman figure doesn't look real great, but I doubt the kids complained much! Below is what the cycle looked like without the Batman figure (and I think another piece or two is missing as well): 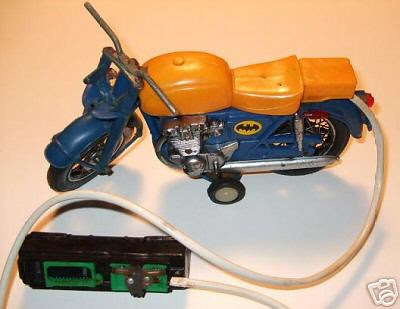 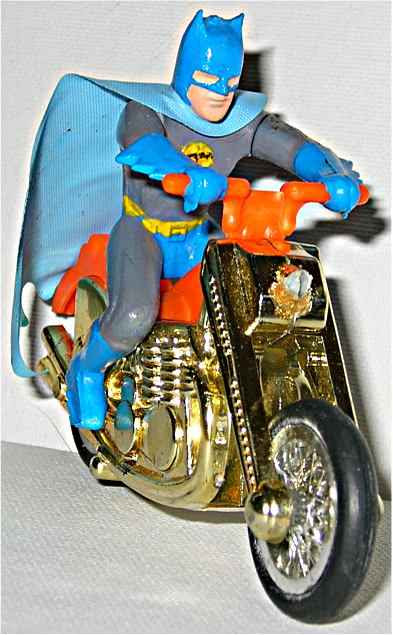 This one I could've sworn I had a photo of on the card, it's the Batman Stunt Cycle, which used a friction motor process. They also did some of these with the Batman villains, like the Joker: 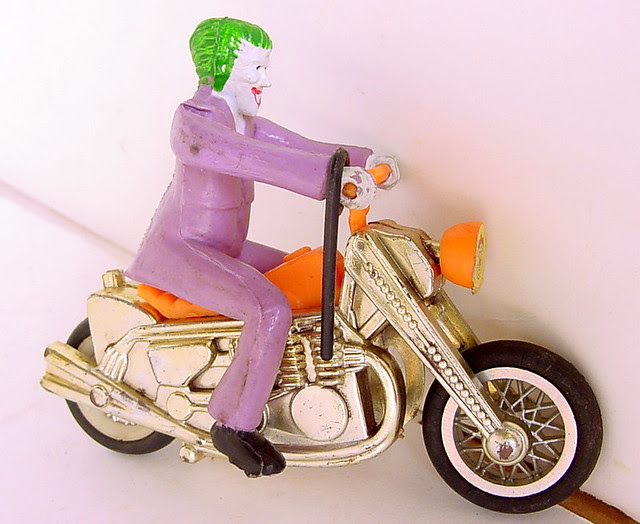 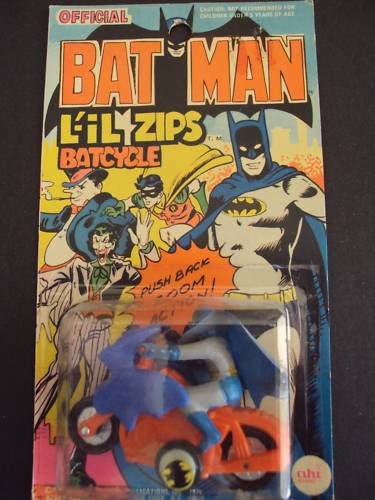 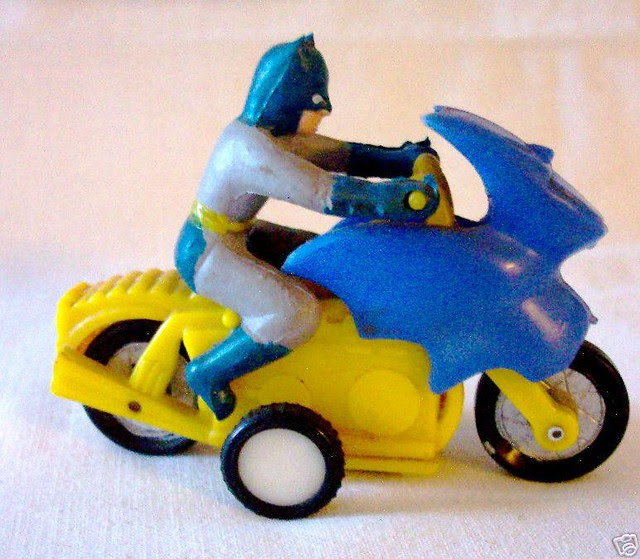 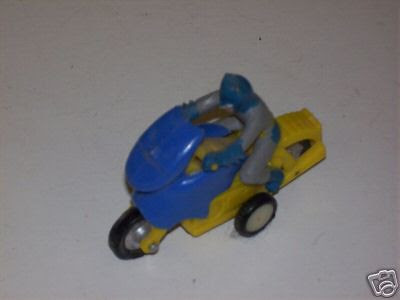 The last of the AHI Batcycles we're looking at is the "Lil Zips" version, easily the smallest Batcycle AHI made, and as you can see from the card, it's a pull back and let go motored version.

One of the problems with trying to find these toys on eBay is that not every seller lists them as being AHI Batcycles... and some will say "Batcycle" and some will say "Batman Motorcycle." But to help you try to find them, here's a one search you could try, and here's another. Both of those searches will give you results that aren't AHI Batcycles, but if they're being offered currently, one of those will do it! 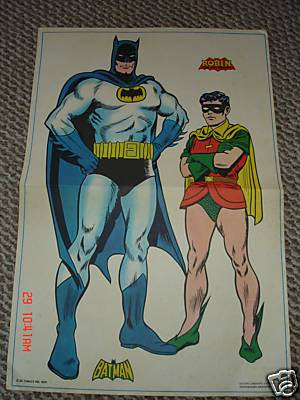 Yes, we're in the midst of a whole slew of Batman merchandise, beginning with the above poster, produced and distributed outside of the USA! 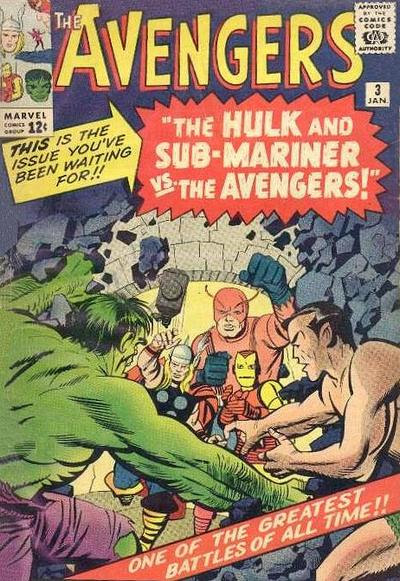 Isn't it good to know that some series of posts here aren't numbered? Of course, those are the series that I've been doing forever and don't want to go back and retroactively number them... 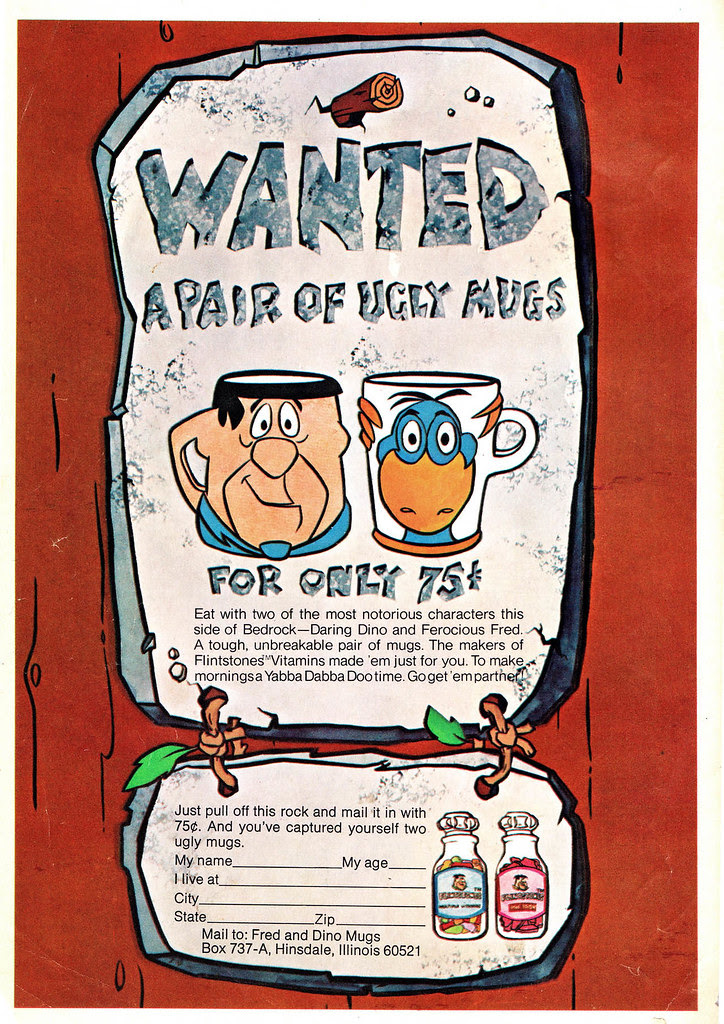 Here's an ad from issue #2 of Gold Key's Hanna-Barbera Fun-In, and it goes to show you know the manufacturers of Flintstones Vitamins were really smart... this one doesn't even require you to buy the vitamins to get the special offer (although I would be willing to bet there'd be coupons for the vitamins in the package when the mugs arrive)! 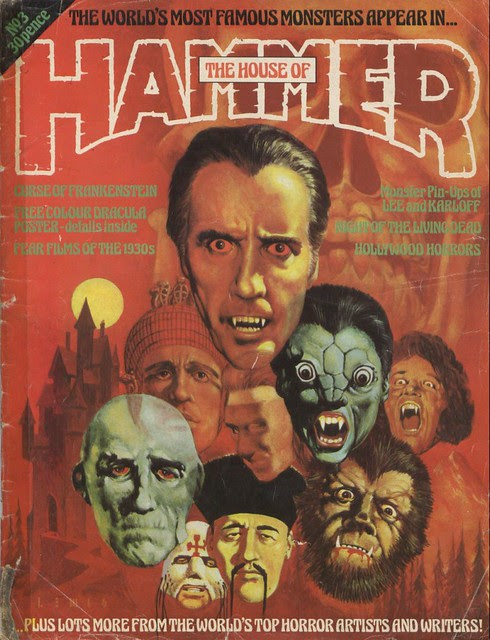 You may recall that last week, we left off with the two kids and Mickey Mouse approaching It's a Small World at Disneyland! 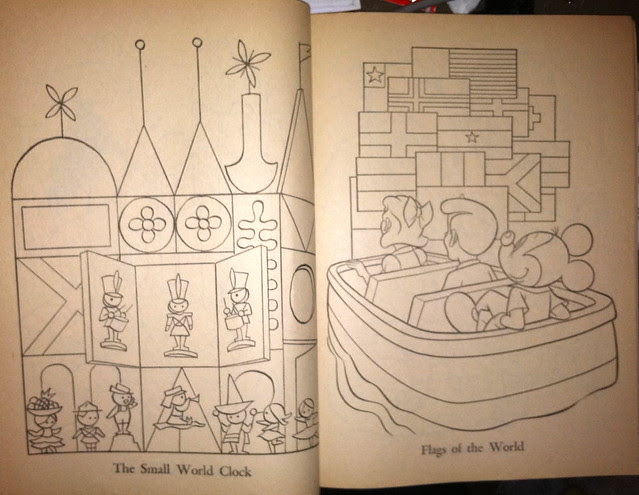 Last week, I think I wrote about how the cover of this book made it seem like the kids were really interacting with the Pirates of the Caribbean, but it turned out they weren't... that actually happens in this half! 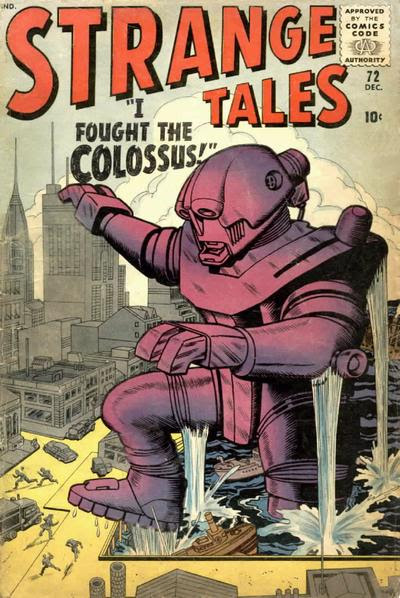 First up this week on Kirby Kovers is Strange Tales #72, with the robot called the Colossus! This is a great cover, from the design of the gigantic robot (except, perhaps, the coloring, but I'd imagine Kirby didn't pick the palatte), the detail of the water pouring out from between the joints... even the inking is outstanding, with a lighter touch on the background than on the Colossus, drawing your attention right to it! One can almost imagine that as soon as it puts its foot on that dock, the dock will give way due to the extreme weight!

And appropriately enough, the last Monster Monday of the month is on Halloween itself! 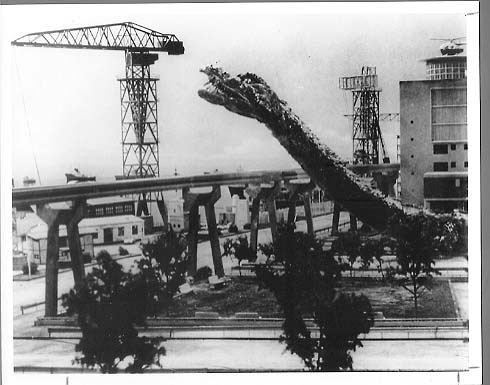 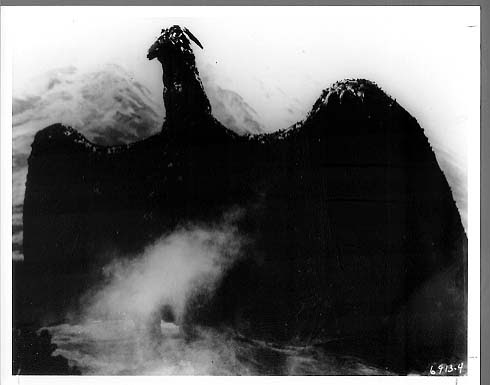 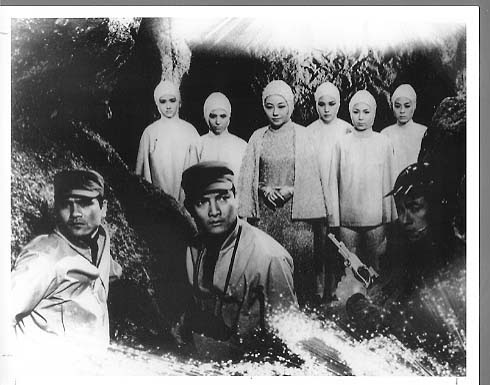 And we begin with a trio of stills from Destroy All Monsters!

Dog of the Geek: Butler! 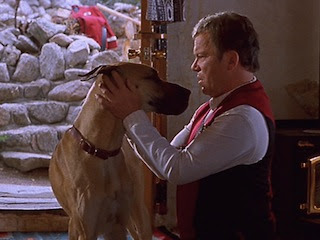 Other Appearances: None that I'm aware of.

Biography: In the year 2293, James T. Kirk is lost and presumed dead when the Enterprise-B is exposed to a strange energy ribbon (the Nexus). In 2371, Captain Jean-Luc Picard also enters the Nexus with Dr. Tolian Soran. Within the nexus, Picard meets Kirk, who has Butler, horses, and Antonia. Picard convinces Kirk that this is not real, and the two Enterprise captains battle and defeat Soran. According to an article on the Star Trek website, the real Butler had died in 2286. Since Kirk had been long retired at the time he disappeared into the Nexus, presumably Kirk acquired Butler after retiring.

Miscellaneous: One would presume that the cabin and Antonia both came from Kirk's past as well, brought to “life” by the Nexus.

Email ThisBlogThis!Share to TwitterShare to FacebookShare to Pinterest
Labels: dog of the geek, Star Trek

Well, here's the last of the Creature Features... finally! 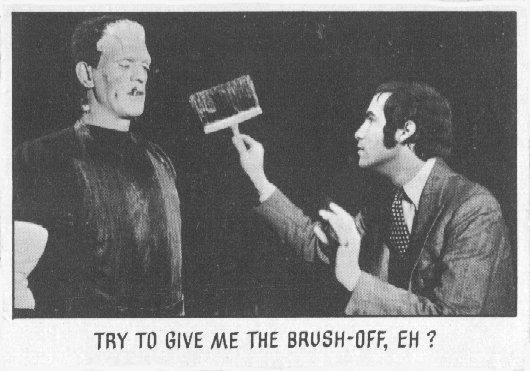 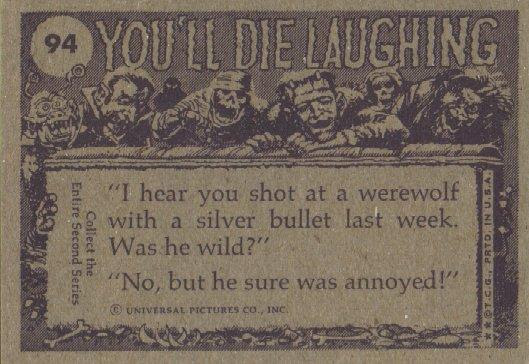 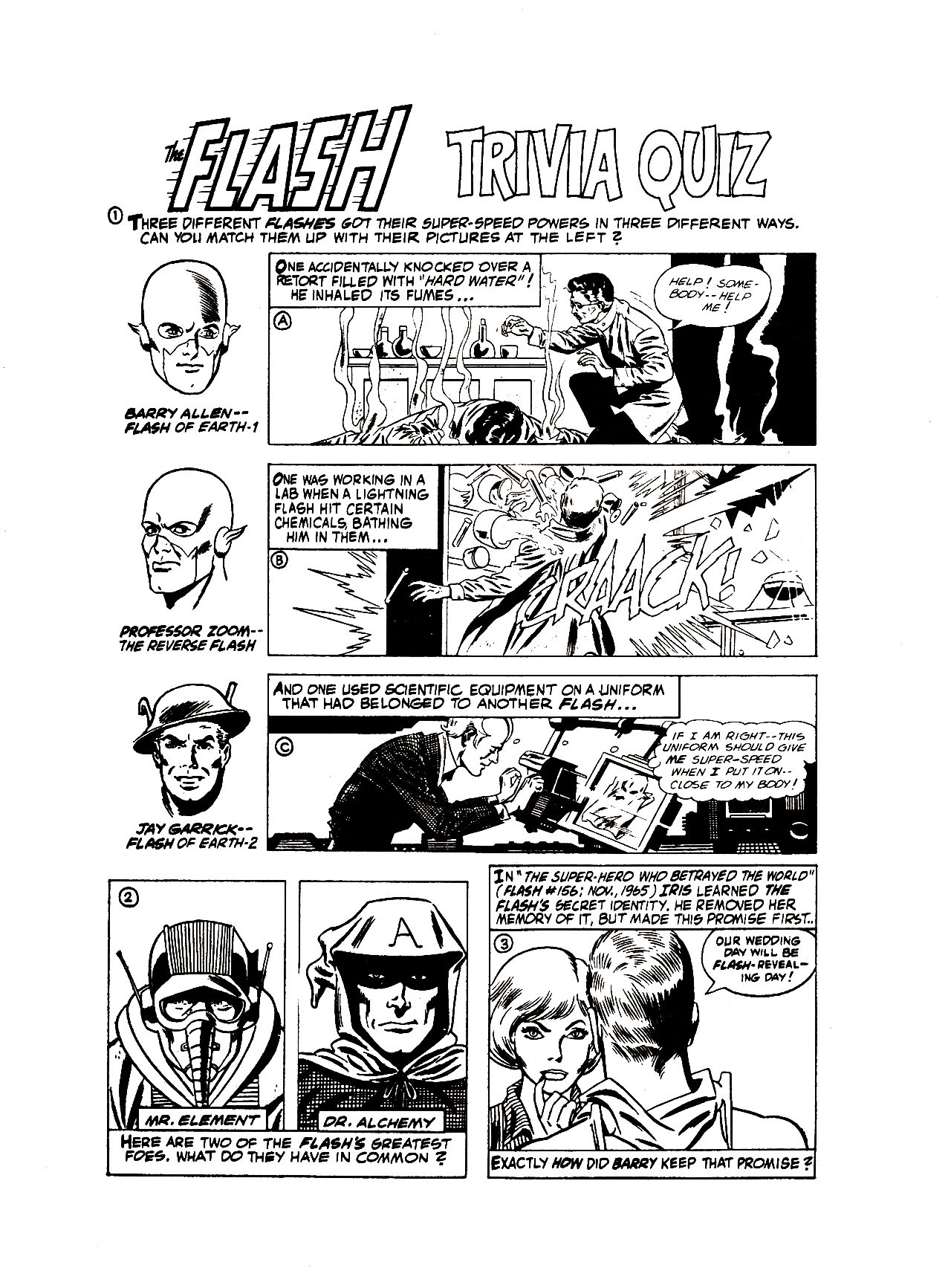 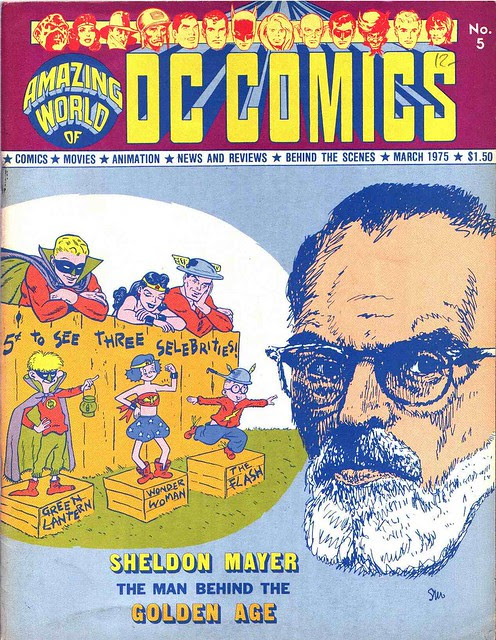