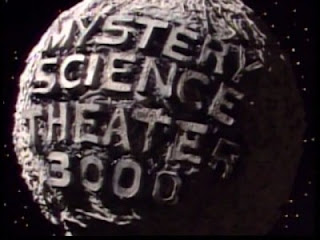 The movie in this episode is “The Robot Vs. the Aztec Mummy,” and I've never seen either the movie by itself or this episode of MST3K before, so this is all new to me! The episode opens in Deep 13, where the Mads are talking about this year's Mad Scientist Convention, and Dr. Forrester's plans to take the top prize. They call the Satellite of Love, where Joel's already demonstrating his invention, an airbag helmet for motorcyclists. The Mads' invention looks like a record player with a hand – the Chalkman. You put a chalkboard record on it, place the hand over the record, and the nails scratch – to drive people away from your house when they stay too long. (They make references based on the old “Close and Play” record player from Kenner).

Before the movie, they show a chapter of “Radar Men From the Moon.” But before the serial starts, Dr. Forrester tests his new security device on the other Mad – and then accidentally on himself. The chapter being shown to Joel and the Bots is the first one. The robots ask Joel why anyone would go to see something that wasn't a whole movie. When a newspaper headline appears on-screen, one of the Bots says, “Oh, look! There's a sale at Penney's!” (shades of Airplane!) When someone says an unusual amount of atomic activity's been noted on the moon, Tom Servo correctly asks isn't any atomic activity there unusual! Pop culture references include “A Boy Named Sue,” Tyco and Lionel trains, Hershey's Kisses, The Honeymooners, Howard Johnson's, Neal Armstrong's “One Small Step...”, Caesar's Palace, and Newhart.

After the serial chapter, Joel and the Bots head out of the theater, and they hear a noise... there's demon dogs outside of the Satellite of Love, covering the ship. (Demon dogs are described as chihuahuas without flesh). Tom volunteers to go outside the ship to get the demon dogs off. Tom's not successful, coming back covered with silly string (apparently that's demon dog poop).

Then the movie itself starts. The gang starts cheering the robot and booing the Aztec mummy when the title appears. The Bots ask who's playing the monsters as names appear. Crow jokes, “This movie is the producer's answer to Montezuma's Revenge!” Since the movie opens up with a narrator, the Bots often break things up by adding additional narration in the same style. There's a few times where Joel reaches up to “touch” things on the screen – in one instance it's to cover the mouth of a singer in time to where the soundtrack volume drops occasionally!

A break from the movie has Joel and the gang go back to the control room, where the demon dogs are still barking away. They let one demon dog in, the leader, who want the giant dog bone (the Satellite of Love resembles a gigantic dog bone). Gypsy shows up as they're negotiating with the leader, and she ends up eating the demon dog leader.

Pop culture references are made to Car 54, Where Are You?, the Iran-Contra hearings, Dragnet, Top Secret!, Dr. Kildare, The Andy Griffith Show (multiple times, because one character resembles Floyd the Barber), Tennessee Ernie Ford, Hungry Man Dinners, Zamfir master of the pan flute, Ethel Merman, Mazola corn oil, Allstate Insurance, Dirty Dancing, James Dean, Phantom of the Opera, Leave it to Beaver, Rod McKuen, Scatman Crothers, “Me and My Shadow,” “Tie a Yellow Ribbon,” “The Beer Barrel Polka,” Peter Graves, James Arness, The Wizard of Oz (second episode in a row to do so, with several gags made), Family Affair, Dean Martin and Jerry Lewis (they do pretty good impressions of both, although the Dean is better), the Michelin Man, Cosmopolitan, “The Hokey Pokey,” Frosted Mini-Wheats, and Doctor Dolittle (the original movie). A lot of jokes are made about the poor quality of the script and acting! A running gag through the whole episode is Joel saying that various locations would make excellent miniature golf courses.

The last break before the movie ends, Joel's talked Crow into disguising himself as the demon dog leader so he can get the demon dogs to leave. Crow heads outside, but isn't successful, coming back in covered in demon dog poop.

You know, I thought the previous episode featured a real stinker of a film, but “Robot Vs. the Aztec Mummy” has got to be the worst movie I've ever seen, including Frankenstein Vs. Dracula and Frankenstein Meets the Space Monster! Nearly the whole damn movie is told in flashbacks, removing most of the suspense. You know how it's called “Robot Vs. the Aztec Mummy”? The robot didn't show up until there was only 16 minutes left to the end of the movie – and actually, it's not a robot, but a cyborg (robot with human head). The whole fight between the Robot and the Aztec Mummy is really lame.
As the movie ends, the theater is beset upon by demon dogs, who have gotten into the Satellite of Love. In the control room, they're everywhere! Since the gang can't do anything about the demon dogs, they try reviewing the movie, but Joel gives up on that, and they finally decide to try using a giant ball to get the demon dogs away. As the giant ball flies away from the ship, the demon dogs follow, although Tom points out that they'll probably bring the ball back.
The Mads are happy with the results of the experiment, although bandaged up from before.
Posted by Jon K at 12:01 AM

Email ThisBlogThis!Share to TwitterShare to FacebookShare to Pinterest
Labels: MST3K