This time around, the first Cover Redux is Fantastic Four #93 and Marvel's Greatest Comics #75! Obviously, coloring has been changed, but there's more... Yes, the image has been hifted down, but it's also been shifted over! New art's been added next to Torgo's upraised arm, and the wall of the arena is different, too! Plus, Ben's head is completely different! Some motion lines have been dropped, too! Can you spot any other changes? 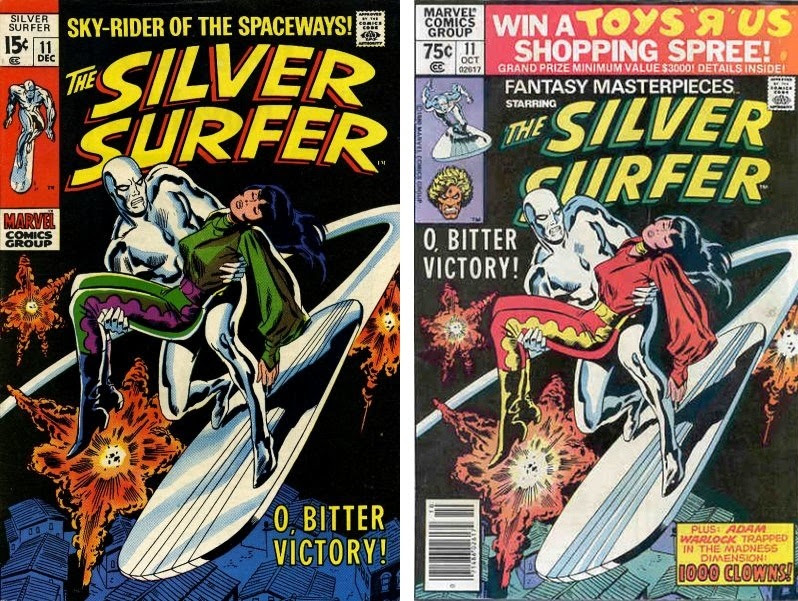 Next, it's Silver Surver #11 and Fantasy Masterpieces #11. The cover's been cropped on the right side, and some art added to the left. Plus, of course, Shalla Bal's clothing is colored entirely differently. Can you spot anything else, other than the re-placement of the story title blurb? Next, Sgt. Fury #11 and Special Marvel Edition #9 -- and yes, it's a completely new cover... but why? This was a bizarre point in Fury's publishing history, because his regular book was new stories for an issue or two, then a reprint, then new stories, then a reprint (or something like that)... so why start reprinting Fury stories in another title? My best guess was Marvel trying to push DC off of the newsstands. Anyway, that doesn't get into why a new cover would be done... It's a similar idea on both covers, with the SME cover having Captain Flint. It certainly looks like the original cover could've been reduced slightly, or even just cropped a little on the bottom, and it wouldv'e fit just fine! Again, the best I can figure is someone wanted it to look like a new book, and not a reprint. 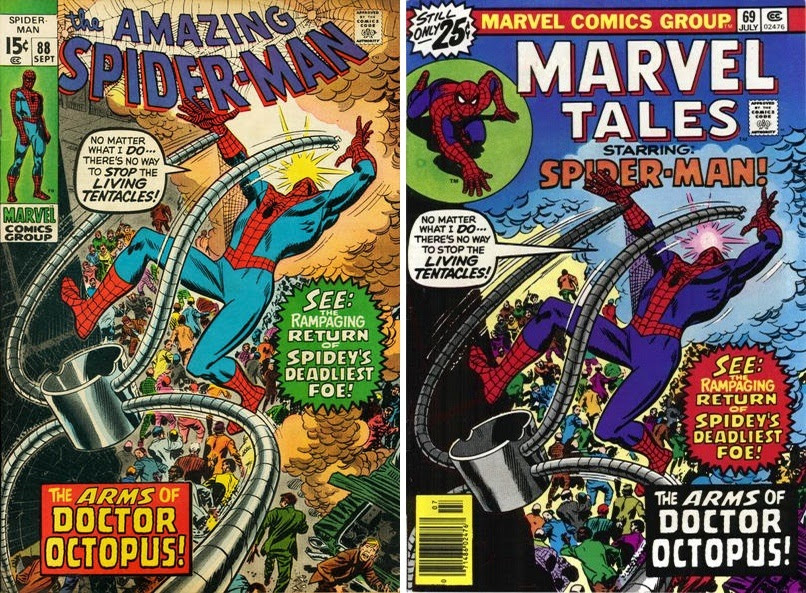 Next, because there's a Spidey cover every time here, we've got Amazing Spider-Man #88 and Marvel Tales #69! Immediately, you can see that the cover is cropped at the bottom and shifted down to accomodate the logo... but look closer: A lot of the background is different! Some of the smoke at the top was lost entirely, new figures are drawn in here and there -- looking at "The Arms of Doctor Octopus" blurb and you can see that different art was done there. Plus the wall is filled in entirely in black. I do have to say I prefer the coloring of Spidey's costume on the reprint cover, but that's because I like the darker blue rather than the bright blue (that's like a Superman blue on the original). On the other hand, I prefer the coloring of Doc Ock's arms on the original!
Posted by Jon K at 12:01 AM