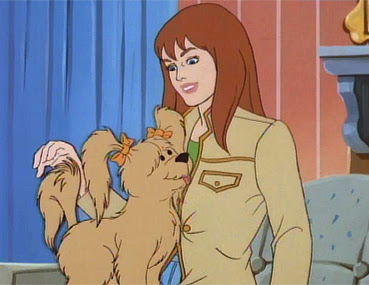 Original Appearances: Spider-Man and His Amazing Friends (NBC-TV, 1981-1983)
Other Appearances: Spider-Man and His Amazing Friends (Marvel Comics, One-shot)
Biography: Ms. Lion was the pet of Angelica Jones (aka Firestar), a college student at Empire State University. After Firestar, Iceman and Spider-Man worked together to defeat the Beetle, the trio decided to team up permanently, and moved in to May Parker's home. Ms. Lion subsequently became May's pet more than Angelica's. Ms. Lion is aware of the “Spider-Friends”' alter egos.
Powers: None
Group Affiliation: Spider-Friends (if you want to push it)
Miscellaneous: A modern version of Ms. Lion is a male Sheepdog owned by May Parker, without powers, but a founding member of the Pet Avengers... and there's yet another reason I'm glad I'm not reading any new comic books by Marvel!
Posted by Jon K at 12:01 AM