The Fleischer Popeyes: Can You Take It 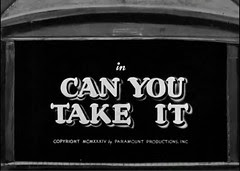 This is the tenth cartoon in the Popeye series (including the Betty Boop pilot), and this one opens with Popeye walking down the street with Olive, singing his theme song, and Olive giggling. He's walked Olive to where he works, the Bruiser Club (which has a welcome mat, but the word "Welcome" is crossed off of it). He drops her off at the hospital entrance, and starts to walk away, but then he notices the sign: "Bruiser Boys Club. Can you take it? We dare you to join." Well, Popeye mutters about this under his breath for a few seconds, but you know he can't resist, right? 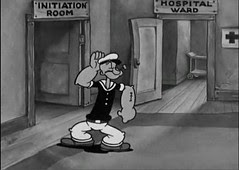 So, in he walks, and the members present are battering each other with giant mallets, kicking each other's chins, and so forth, laughing about it all the time. However, a quick cut to the entrances to the Initiation Room and the Hospital Ward soon make you see that this is not for everyone, as two rough-looking orderlies take one applicant on a stretcher from the first door to the second, followed by another. Popeye's response? "Some fun, eh kid?" and he heads over to the Membership Committee door. 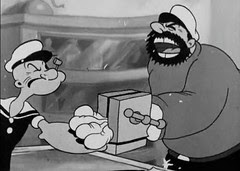 Walking in, he tells Bluto, the club president, that he wants to join. Bluto laughs at the idea, as do his goons, and then asks Bluto if he can take it, and squeezes Popeye's hand. This causes the thumb to expand in response, but nothing Popeye can't shake off. Popeye then grabs Bluto's hand and squeezes, his hand becoming a vise, and causing Bluto to cry out in pain. Bluto doesn't seem that impressed, however. Then he offers Popeye an "El Ropo" cigar, and lights his own (Popeye uses his chin to strike his own match). Bluto sucks his cigar down to ash in a second, and blows the smoke at Popeye, and then Popeye sucks his entire cigar down to ash and blows the smoke out of his eye, causing Bluto to choke! 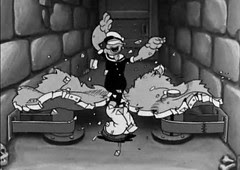 He tells his boys to put Popeye through the works, and they blindfold him, and start kicking and punching him around, then throwing him through a door marked "1st 2nd 3rd Degre," where Popeye finds himself in a stone hallway (still blindfolded) where two giant rotary saws are spinning. Walking between them, Popeye laughs at the tickling he gets from the saws as the saws are wrecked on his near-invulnerable body. Walking onward, he's buffeted from above and below by mechanical devices, then falls into a hole that sends him down a spiral pipe (that twists Popeye similarly, of course). 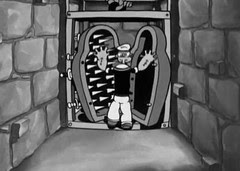 Landing, Popeye walks down another stone hallway, where a series of mechanical arms punch him as he walks, but this still doesn't stop him! Then, Popeye enters an elevator whose car is an iron maiden, which closes on him and brings him back to the initiation room.  Bluto pulls the iron maiden out, and rubbing his hands in glee, opens it up, to find that all the knives have been bent out of shape, and Popeye's none the worse for wear! 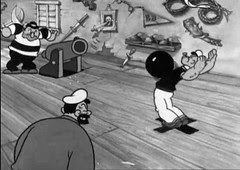 Bluto's quite mad about this, and tells Popeye (still blindfolded) that they're going to take his picture, but he sets Popeye up in front of a cannon, which is shot at Popeye! The cannon ball bounces off Popeye and back into the cannon (which is destroyed), and Popeye's blindfold comes off, and our hero complains about stomach pains. Bluto picks him up and punches him up to a metal "car" on pulleys, which starts rolling down a rope, and sends Popeye to the hospital ward, where he's dropped into a bed and Olive's there waiting for him. Bluto and the boys laugh. 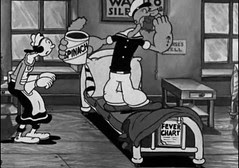 Olive frets over Popeye, and Popeye moans he's so sick (while hearts burst around him, and he smokes the thermometer to ash). However, when he learns that he's not a member of the Bruiser Boys Club because he can't take it, this gets Popeye's dander up! He gets up out of bed, pulls out his spinach and eats it (we're close to the fanfare here, very close) and of course, this invigorates him, and he leaps back to Bluto and the boys! 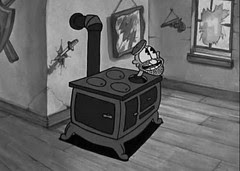 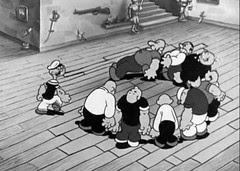 Fortunately, they're all standing in a circle, so Popeye just has to sock the first one, and a chain reaction occurs, although the last one knocks Popeye down. Then, Popeye hits in the other direction, but the same thing happens. Then, Popeye hits the floor, sending them flying! Next, Bluto comes after Popeye with a club, but Popeye keeps ducking, and then grabbing the club and bonking Bluto with it. Popeye then proceeds to take all the remaining members on, one at a time, including one who comes after him in a suit of armor (which gets Transformation Punched into a cast iron stove), and then it's Bluto's turn again! 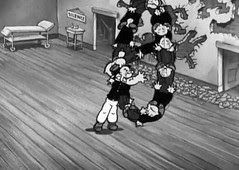 The fight gets into high gear now, as Popeye hits them through walls, and then even gets them in a sort of rope that he swings around like a cowboy doing rope tricks, and then cracks the whip, sending them all flying into beds in the hospital ward. 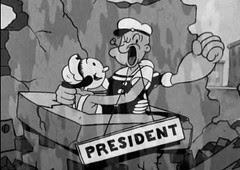 Then, Popeye goes to the president's desk, and says, "In the name of the Bruiser Boys Club, I call this meeting to order!" and slams the gavel onto the desk -- which not only smashes the desk, it brings the entire building down! Popeye sings, "I'm Popeye the sailor man!" and we iris out.

Now, THIS is what I call a Popeye cartoon! We get a chance to see Popeye's durability demonstrated, we see that he does have a sense of pride, and everyone's in character. Given how much I enjoyed it, I give this one my first ever rating of... FIVE CANS OF SPINACH! Arf arf! 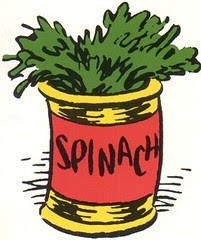