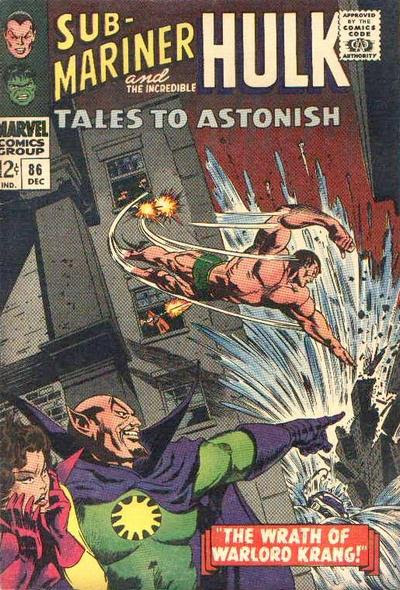 Title: “The Birth... of the Hulk-Killer!”
Credits: Written by Stan Lee, penciled by John Buscema, inked by Mike Esposito (as Mickey Demeo), lettered by Art Simek.
Supporting Cast: General Ross, Major Talbot, Betty Ross, Rick Jones
Villain: Boomerang, Hulk-Killer Android
Hulk Intelligence: As noted before, not too bright and short-tempered.
Guest-Stars: None
Plot: As the citizens of New York see the Orion Missile getting ever closer, someone actually notices there's someone on it – and that someone is Bruce Banner, who designed the Orion Missile (and leaped onto it as the Hulk before changing). The course can't be changed from the ground (unless, I guess, you have a giant expando-matic robot hidden in the trunk of a convertible, like Gorki did), but it can be done manually, so Bruce pops open a convenient panel that doesn't need to be unlocked, unscrewed, or unbolted, and manual sets the direction-finder so it won't strike the city, but instead crash at sea. Bruce figures at least this will let him die as a man, but the stress causes his pulse to quicken, changing him into the Hulk, who survives the explosion, as well as the shots of the Air Force Jet that had been following the missile. Meanwhile, far away, the Leader's hidden lab has been discovered by the police, and within they find a powerful humanoid robot, designed to beat the Hulk. Within the hour, Ross, Talbot and Betty are brought there, and by nightfall, their top research expert has arrived, and is given the Leader's notes and ordered to make it operational, so it can destroy the Hulk! The research expert succeeds, and the Humanoid, dubbed the Hulk-Killer, starts walking out of the lab, not letting things like walls get in its way. Meanwhile, it's somehow taken this long for the Hulk to swim ashore, where Rick waits, and they hide in a warehouse. Elsewhere, at Boomerang's apartment, the villain is royally ticked off, as the Secret Empire has been smashed (courtesy of the Sub-Mariner), but at least he's learned his weaknesses, and improved his skills and his weapons, and he figures he's now the Hulk's equal, and will be the victor next they clash! Meanwhile, Talbot begins to realize they shouldn't have activated the Humanoid, as it's rampaging in search of the Hulk. But it hasn't found the Hulk, so it ends up battling soldiers instead! Coincidentally (or is it coincidence?), the battle between the Hulk-Killer and the Army ends up reaching the warehouse the Hulk is kiding in, and the Hulk smashes through the wall to engage the Humanoid! But the Humanoid doesn't seem to even feel the Hulk's first blow, and then it smashes the Hulk to the ground, and prepares to finish him off!
Invention Exchange: It's revealed in this issue that Bruce Banner designed the Orion Missile – was this mentioned before? When the heck did he have time to design this, and why was anyone letting him do this kind of work if he was still suspected of being a traitor? I also have to wonder why the Leader never got around to using his Hulk-Killer Humanoid... unless he'd already realized how uncontrollable it would be?
Reprinted In: Marvel Super-Heroes #41, The Incredible Hulk (Pocket Books, 1978), Essential Hulk #1.
Notes: Flexible Marvel Time is on the march here, my friends... Ross and company were in Florida for the test of the Orion Missile, which went off course during its seven minute flight, almost destroying New York, but then going back to the ocean... and somehow, an hour was enough time once it exploded for all the reports to be done, as well as fly Ross and company to the Leader's lab in... New York (when was it ever established the Leader was based out of there?), and then several hours after that, the research dude arrives, and then it's about midnight when he activates the Hulk-Killer... and it's after that time has passed that the Hulk finally swims ashore? I mean, sure the Orion Missile was fast, but it's been established that the Hulk can swim pretty fast when he wants to! A bunch of night-owls, eh?
Posted by Jon K at 12:01 AM