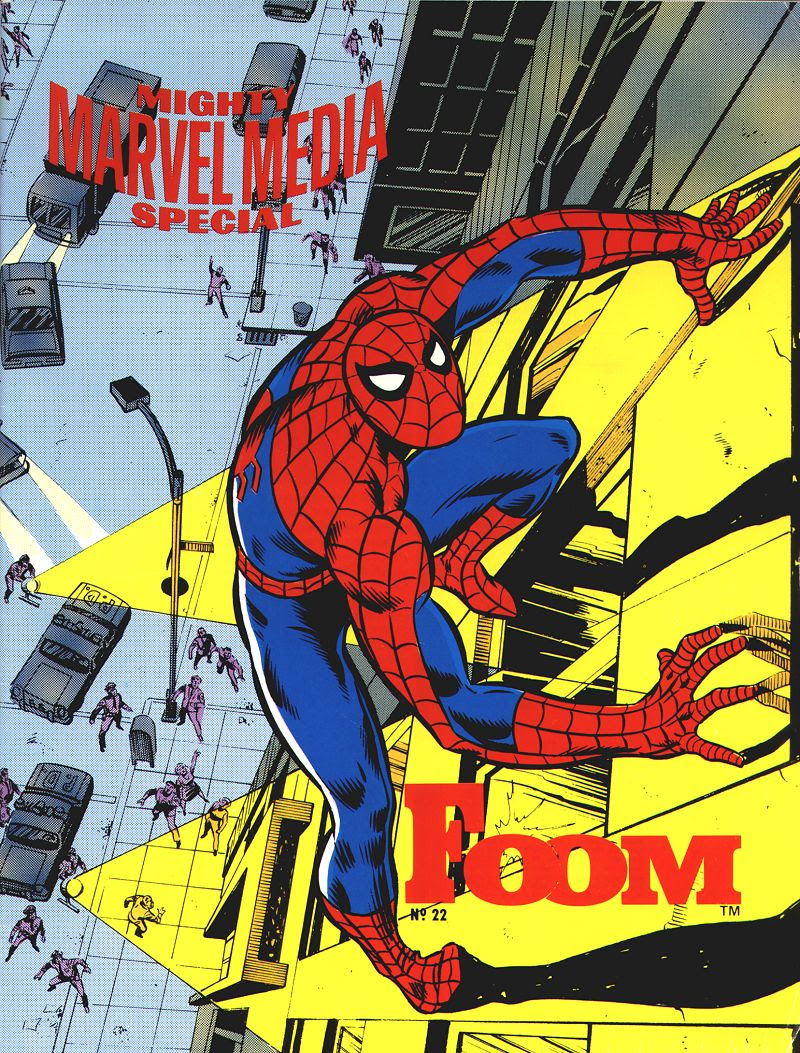 Time for some Cover Redux! First up this time is Sgt. Fury and His Howling Commandos, issue 60 on the left, and the reprint issue #156 on the right! At a glance, it just appears that it's colored differently... but look closer, at the top behind the logos! The original has the brick wall going over the top, so they're entering a building -- the new one makes the brick just a wall they're walking past. I wonder why they made this change? Doesn't make sense. 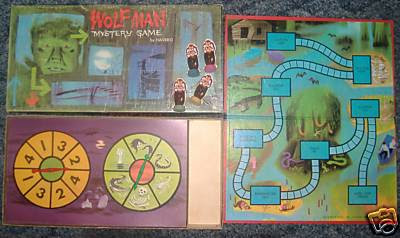 First up this time around is the Wolfman Mystery Game! 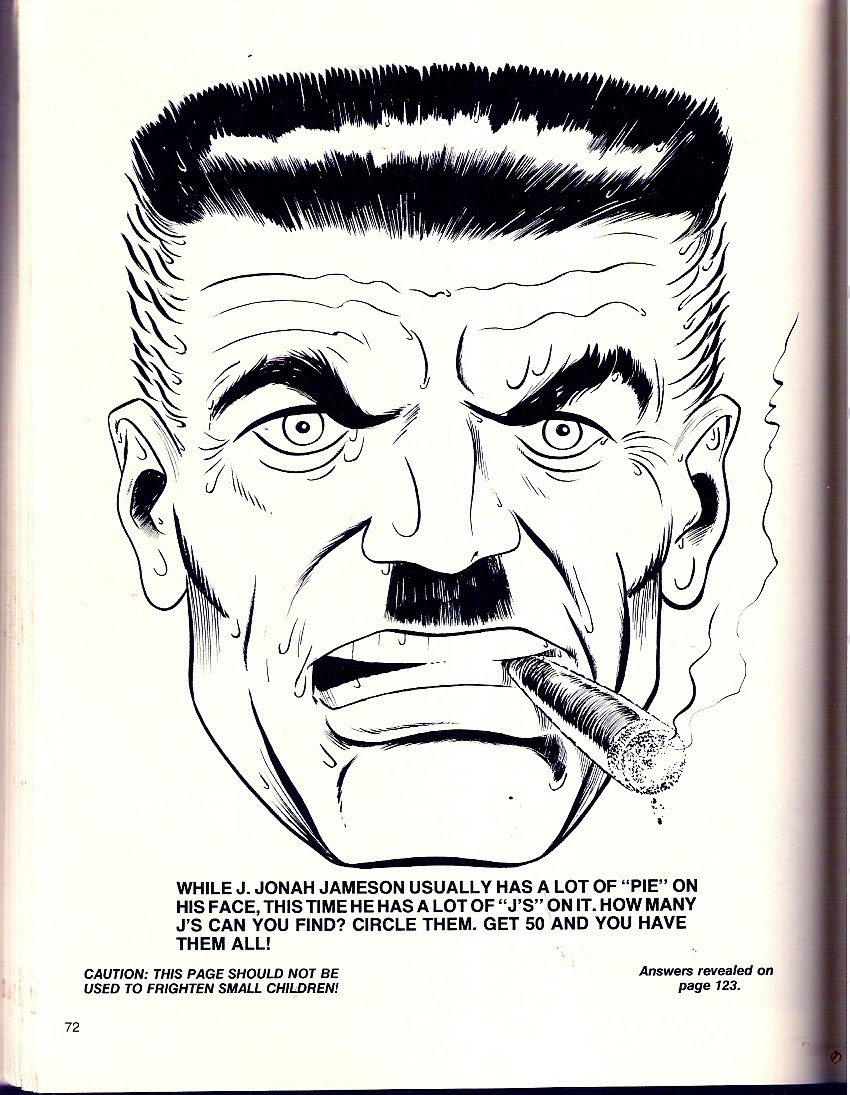 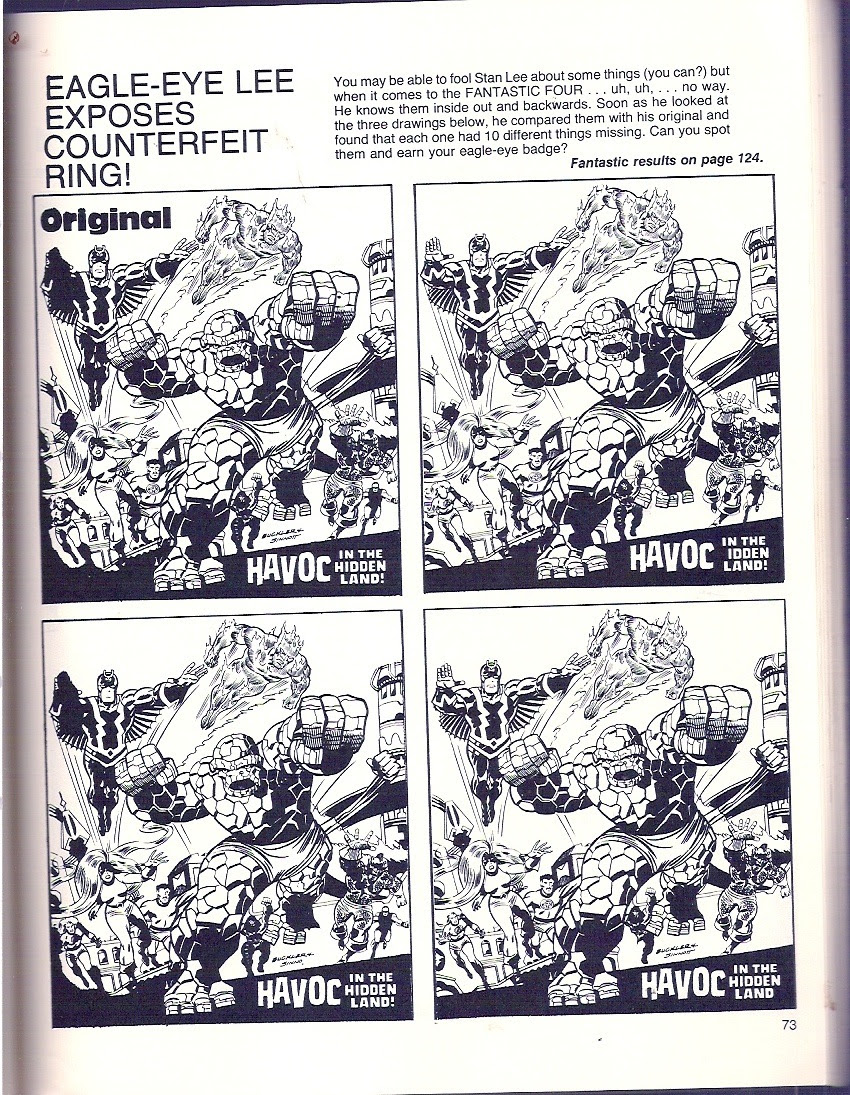 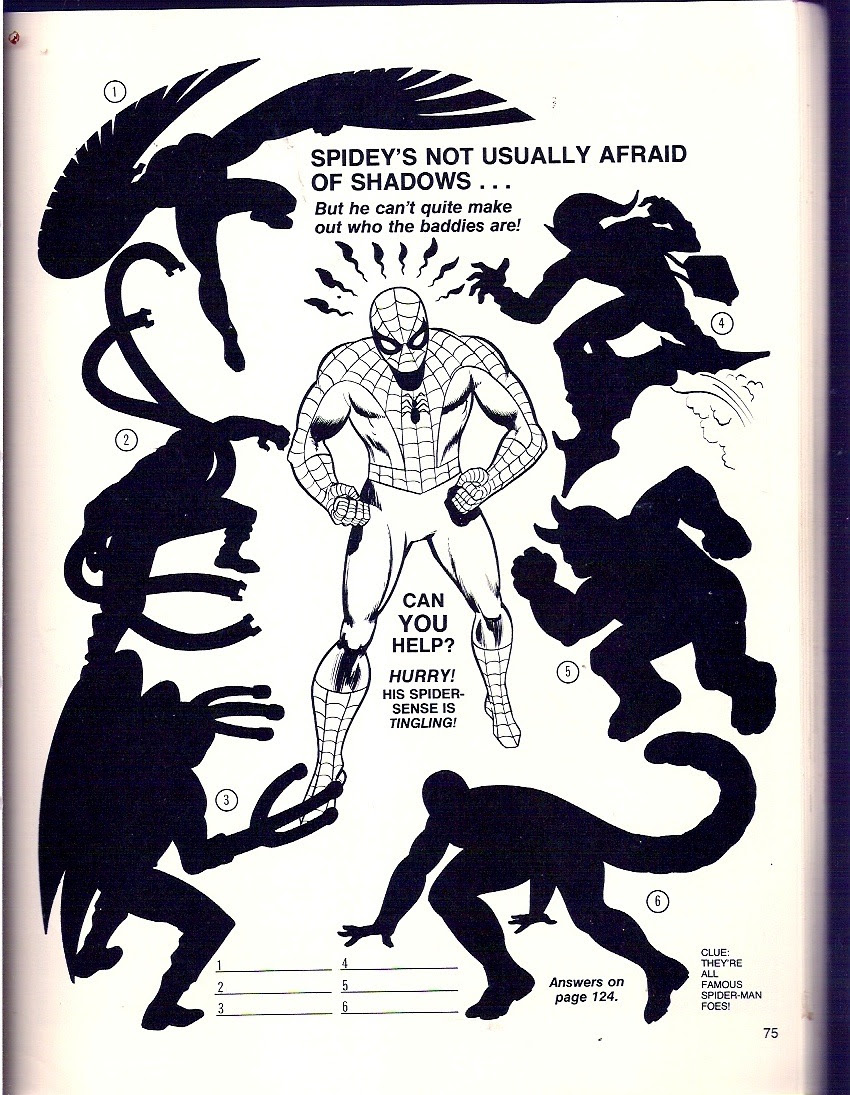 ...an action figure line! Well, maybe I should rephrase that... It should've been a toy line.

What the heck am I talking about? Well, you'll recall the Marvel comic book series ROM, Spaceknight, right? Based on the Parker Brothers electronic toy?

Well, I think Marvel screwed up by not buying the ROM rights outright from Parker Brothers, and then when they started their partnership with ToyBiz (or even before then), should've started producing a line of ROM and the Spaceknights action figures, all based on the comic book, and all to scale with other Marvel figures. Oh, there could still be some kind of electronic stuff -- maybe a light flashing or something (although I would love it if they could've come up with something for Rom's analyzer, either ultraviolet or infrared, that when shown on cardboard cutouts of people would cause some to flash an image of a Dire Wraith instead). Any of the other Spaceknights could be included, and of course, there would have to be some Dire Wraiths -- both science and magic. Heck, since Rick Jones was in the book for a while, he could be included in the series, as well!

Of course, I'm thinking that all of the Spaceknights should have vacformed chrome, instead of the dull gray that the original ROM figure had, and have the standard poseability of the time. I'd also steal an idea from Kenner's Darkseid Super Powers figure, and have a panel on the top of the Spaceknights' heads that would allow light to come in and be reflected to cause their eyes to glow!

Naturally, the entire line would HAVE to come with mini-comics, even if some of them ended up just being retellings of stories from the Marvel comic.

An added advantage of this is that all of those comics guest-starring ROM wouldn't have to be excluded from the Essentials, plus we could have Essential ROM volumes now!

Email ThisBlogThis!Share to TwitterShare to FacebookShare to Pinterest
Labels: It Oughtta Be...

I'm pretty sure I've written about these before, so forgive me if I repeat myself. Aurora had, of course, been successful with their monster model kids in the 1960s and early 1970s, but model building started shifting a little in the early 70s... snap-together kits were becoming more and more popular, and Aurora responded by changing from their standard monster models to the Monsters of the Movies line, which also had smaller boxes! Well, actually, they kind of spearheaded the snap-together thing, I suspect, with the Monster Scenes before these! 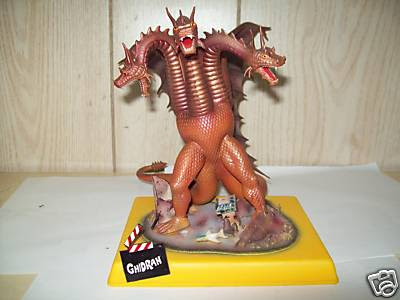 Anyway, to start off, here's Ghidrah (as they call him on this box). Too bad they did him and Rodan (after the jump) but didn't do a new Godzilla kit in the same scale! 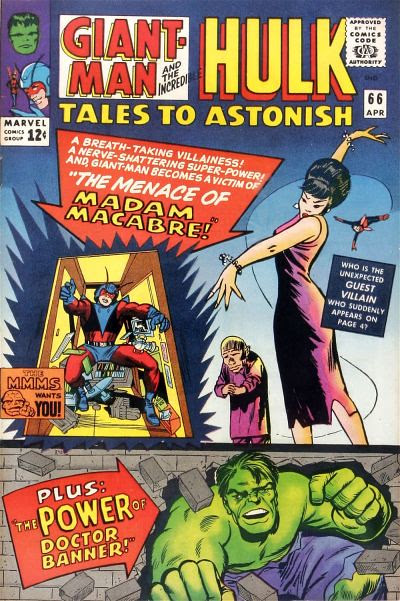 Credits: Written by Stan Lee, Pencils by Steve Ditko, Inks by Vince Colletta, Letters by Art Simek.
Supporting Cast: General Ross, Major Talbot, Betty Ross
Villain: The Leader, the Chameleon (cameo)
Hulk Intelligence: With this issue, the Hulk stops dropping the definitive article and refers to himself entirely in the third person... “Now it is Hulk's turn!” etc.
Guest-Stars: None
Plot: At the Soviet weapons base, the Hulk and his new friend are suddenly ambushed by the leader of the base, firing a proton gun. The Hulk's friend dives in front of the ray, sacrificing himself. The Hulk becomes enraged and pursues the leader of the base, who flees because the proton gun takes an hour to recharge between blasts. As the Hulk pursues his quarry through building after building, the stress begins to take its toll, and the Hulk changes back to Banner. Outside the base, tanks and soldiers arrive on the scene. Back in the USA, Major Talbot is informed that Banner is behind the Iron Curtain, and that he must be rescued or silenced. Talbot volunteers to get Bruce, but he's denied. At General Ross' headquarters, Ross gets word about Banner's whereabouts, and Betty overhears. Betty, of course, can't believe Bruce is a traitor. Talbot arrives and insists Bruce is. At the Leader's HQ, he contacts the Chameleon to see if there's any word about Banner's location, and when he hears Banner's behind the Iron Curtain, he figures the Hulk is there, too. The Leader contacts the Commissar, and asks about Banner, learning that Banner's at the weapons testing center. The Leader decides to take no action, but wait for new developments. At the base, jets fly over searching for the Hulk, but can't spot him, mainly because he's still Banner. When the jets spot Banner, they open fire on him. Banner runs, and passes by the corpse of the Hulk's friend. The sight causes him to change back into the Hulk just as an artillery blast strikes! Angry, the Hulk leaps into the air holding two large pieces of debris, which he throws at both jet planes, destroying them instantly. When he lands on the ground again, he starts walking toward the armored task force.
Invention Exchange: Nothing really new this time!
Reprinted In: Incredible Hulk Special #1, Incredible Hulk (Simon & Schuster, 1978), Essential Hulk #1
Notes: Adapted as episode 10 of the 1966 Hulk animated series. It's interesting to note how on the cover that Giant-Man is still getting the lion's share of the space, eh? This story seems to be another in the endless series of tales in which Stan's just trying to fill in space while he figures out what's going on. Yes, we get to see the Hulk's reaction to losing his first friend (well, at least the first friend he remembers). And didn't Stan even care enough to provide names for the commander of the weapons base, or the prisoner whom the Hulk befriends? We got the name of a professor who was captive, and then he's gone from the story forever!

Ten of a Kind: Action Figures I Want Someone To Produce!

Yes, Ten of a Kind continues to focus on toys! Why not? So, in no particular order, here's some action figure lines I want someone to produce!

1. Doc Savage and the Amazing Five: They could either just do a boxed set or individually. Of course, Pat Savage and John Sunlight (the only foe to ever return) would have to be part of the line-up!

2. The Monkees: I'm thinking first release in their matching costumes (with the red double-button shirts), maybe second release as Monkeemen, and final release in some groovy threads.

3. Dungeons and Dragons: The Animated Series: Don't tell me there's not a market for these guys!

4. The Beatles: We've had two different action figure lines based on animated versions, let's get some versions based on the actual Beatles, with different waves based on different albums, perhaps?

5. Mighty Crusaders: I know, there was the Remco line, but it really sucked. We need a good line of figures!

6. Planet of the Apes: Again, there have been lines of figures, but I've never felt they were complete. I'm envisioning a wave for each of the original movies - which of course means that Taylor gets included in the first two, Cornelius and Zira get to be in the first three (as is Zaius), and Caesar is in the last two. So what? At least Caesar gets different clothes, right?

8. The Marx Brothers: I know I'd want them on my self!

9. Hanna-Barbera Heroes: This would be a catch-all line for characters that either haven't been made yet, or need a reissue. I'm thinking Frankenstein Jr., the Impossibles, a straight Birdman, Shazzan, Space Ghost (with Jan, Jace and Blip -- perhaps included with the Phantom Cruiser), Herculoids, Galaxy Trio, etc.

10. The Banana Splits: Yes, I want a separate line of them, sold as a set with a display included that looks like the clubhouse.
Posted by Jon K at 12:01 AM No comments: 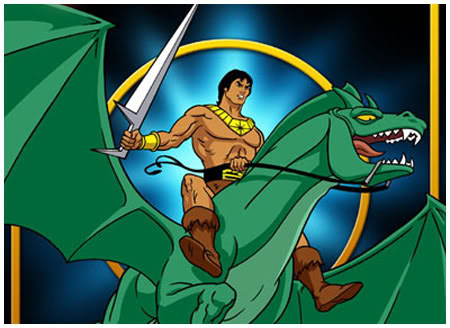 Concept: As listed on the Internet Movie Database, “An astronaut, stranded on a primitive planet, fights against the tyranny of the Overlord.” 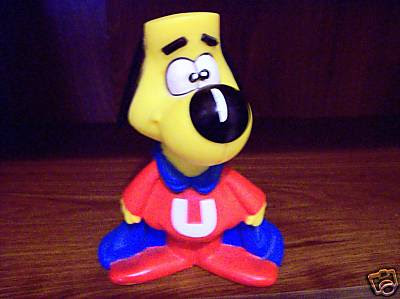 First up this time around is the figural Underdog bank, which I really dig! More after the jump! 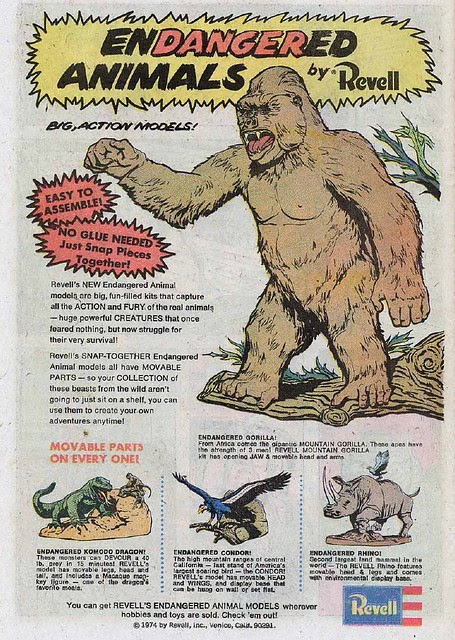 OK, here's one that appeared in Mighty Samson #26 (although I happen to have right next to me a copy of Superman #282 with it on the back cover) for Revell's Endangered Animals models, all with movable parts! Somehow, I don't think kids were buying these because of the fact that they were endangered -- I think most kids bought the gorilla kit (at least) because it was a gorilla! 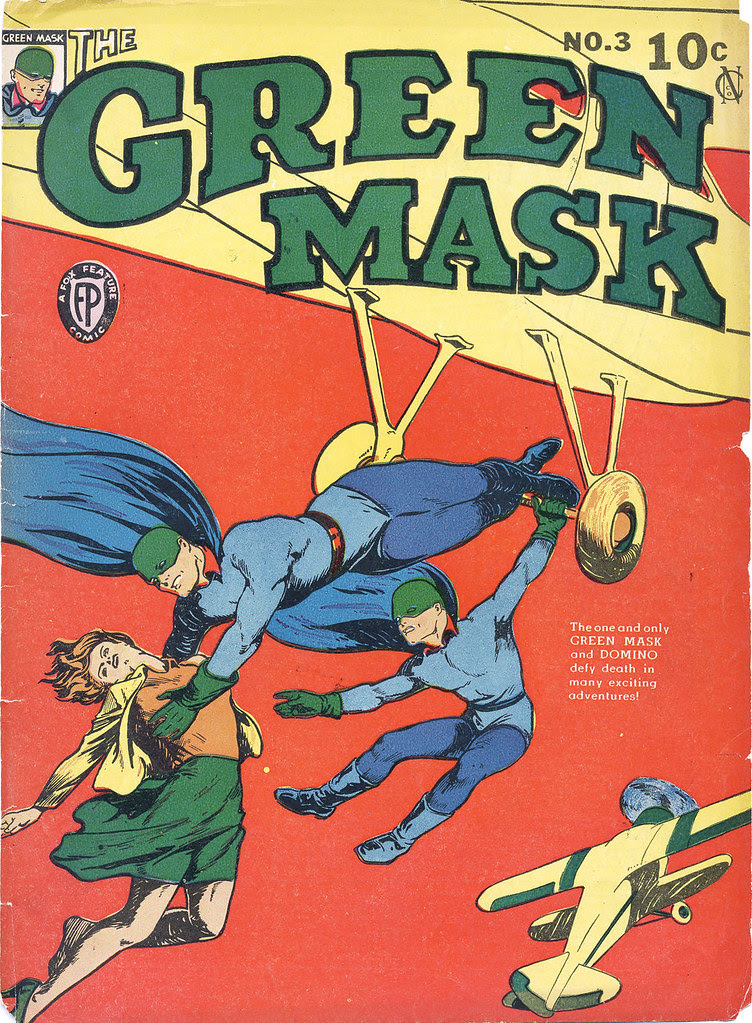 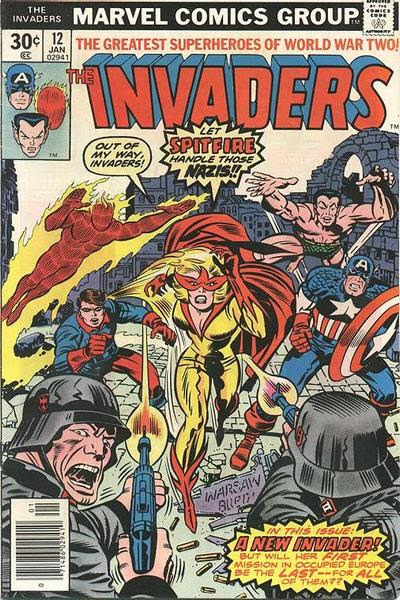 Our first Kirby Kover this time around is the cover for The Invaders #12, which I believe was one of the first issues of The Invaders that I ever bought! It's pure Kirby goodness all the way, with the Invaders plus Spitfire going after some Nazis... I love it!