More GI Joe madness here... but that's not all this time! 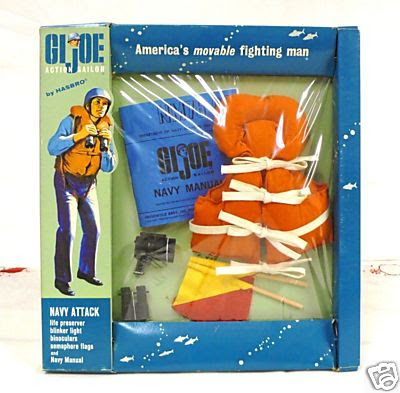 Navy Attack above, Pilot Scramble below, and more after the jump! 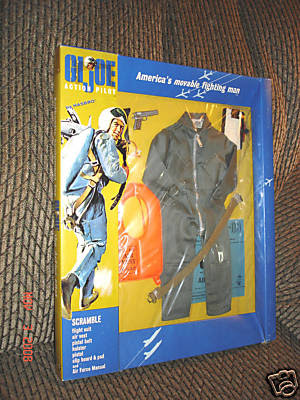 Concept: From the series opening: “Once upon a time there was a vain queen who was so jealous of her beautiful stepdaughter, Snow White, that she poisoned her with an apple. But a handsome prince came along and broke the spell. Snow White and Prince Charming threw the wicked stepmother down a bottomless pit and lived happily ever after. But, it turns out the pit wasn't bottomless - just very deep. And now, the queen was very mad. With a spell so powerful even she couldn't control it, she put the Charmings asleep for a thousand years. She also got herself and one dwarf. Eventually they woke up.”

Total Episodes: 21, with one unaired.


Don (Paul Eiding) and Sally Miller (Dori Brenner): Next door neighbors of the Charmings, who find their clothing style odd but never figuring out who they really were.
Geek Guest-Stars: None.
Geek Pedigree:
Original Snow White Caitlin O'Heany previously played Sara Stickney White on Tales of the Gold Monkey. Magic Mirror Paul Winfield had guest-starred on shows like The Man From UNCLE, Mission: Impossible, and other shows, but may be forever identified as playing the doomed Captain Clark Terrell in Star Trek II: The Wrath of Khan. He also played Lt. Ed Traxler in The Terminator. After The Charmings, he guested in an episode of Star Trek: The Next Generation, Babylon 5, and voiced characters in Gargoyles, Spider-Man (1997), The Simpsons, Batman Beyond, and other shows. Paul Eiding is another of the breed of actors who are known for on- and off-screen roles, prior to this show he guested in episodes of the 1986 versions of The Twilight Zone and Tales From the Darkside, and was the voice of Perceptor on The Transformers. He later voiced No-Zone on The Toxic Crusaders, and has done additional voices for all kinds of animated shows and video games.


Brandon Call was the voice of Fairfolk in The Black Cauldron, and played Tony Jr. in I Dream of Jeannie... 15 Years Later. Cork Hubbert had guest-starred on The Twilight Zone (1986) and was Ta in Caveman, and has appeared sporadically on other genre shows since. Judy Parfitt had guested in multiple episodes of The Avengers, and played the Red Queen in the 1973 Alice Through the Looking Glass. Christopher Rich didn't do any genre roles beforehand, but I'd be remiss if I didn't mention that he played Archie Andrews in the 1990 TV movie Archie: To Riverdale and Back Again.
DVD Release: None
Website: There are a few out there, but most seem to be rehashing either the IMDB information or the Wikipedia entries.
Notes: I find it interesting that there have been several TV shows in the past year based on fairy tales, while this one is virtually unremembered today!
Posted by Jon K at 12:01 AM No comments: 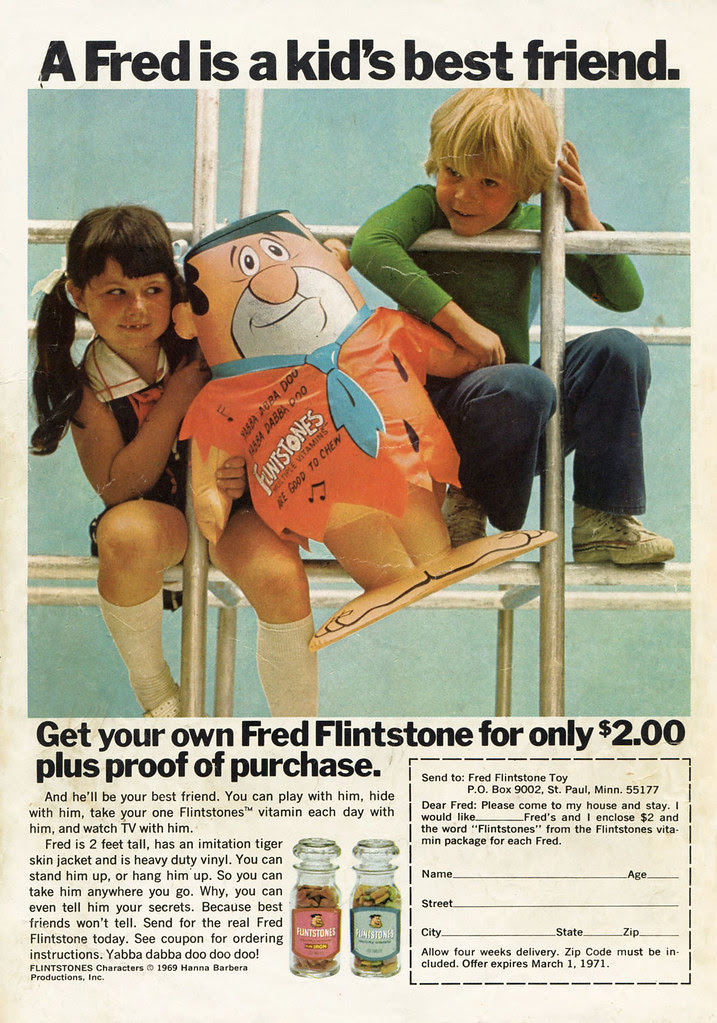 First up in this display of comic book ads of yore is this ad that appeared on the inside front cover of Hanna-Barbera Fun-In #5, and it's a mail in offer for an inflatable Fred Flintstone (very few of which probably survive to this day). You know what strikes me about this? The really weird look the girl is giving the inflatable Fred! Creepy, isn't it?

And we're into the 1980s stuff, starting with this set! This set was comprised entirely of Scooby-Doo, Yogi Bear, and the Flintstones... hopefully it won't get monotonous! 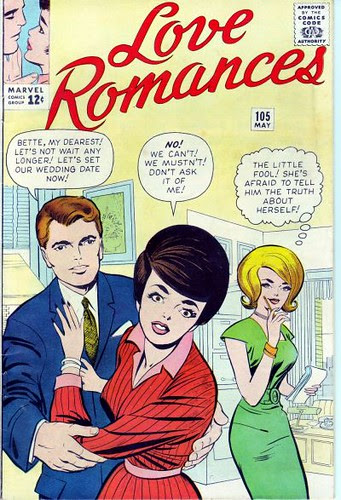 This week's first Kirby Kover is Love Romances #105, and this could almost -- almost -- be mistaken for a John Romita cover! But it's definitely Kirby's work -- you can absolutely tell by looking at the man! 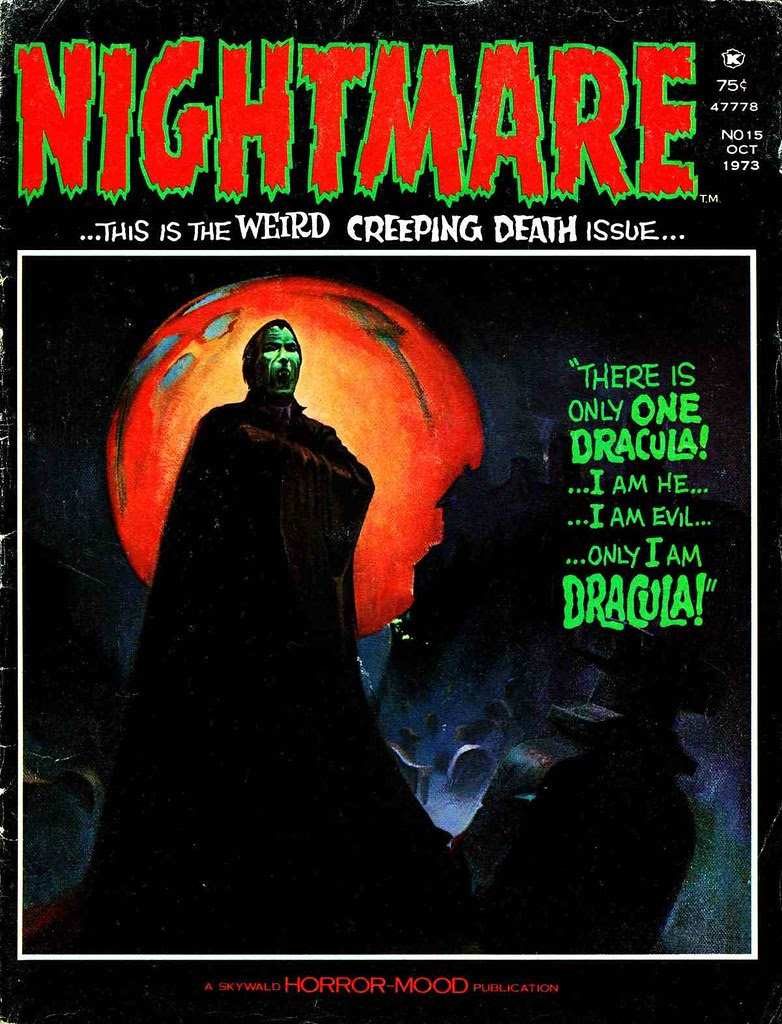 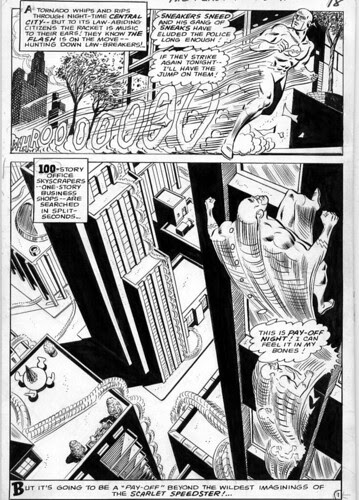 We're continuing the parade of Flash collectibles, and we've got a a little art to start with -- and you've probably already seen it if you've been following the Random Acts for a while! Anyway, here's page one of Flash #12, by Ross Andru, with more after the jump!

CBT: Planet of the Apes Cut and Color Book! 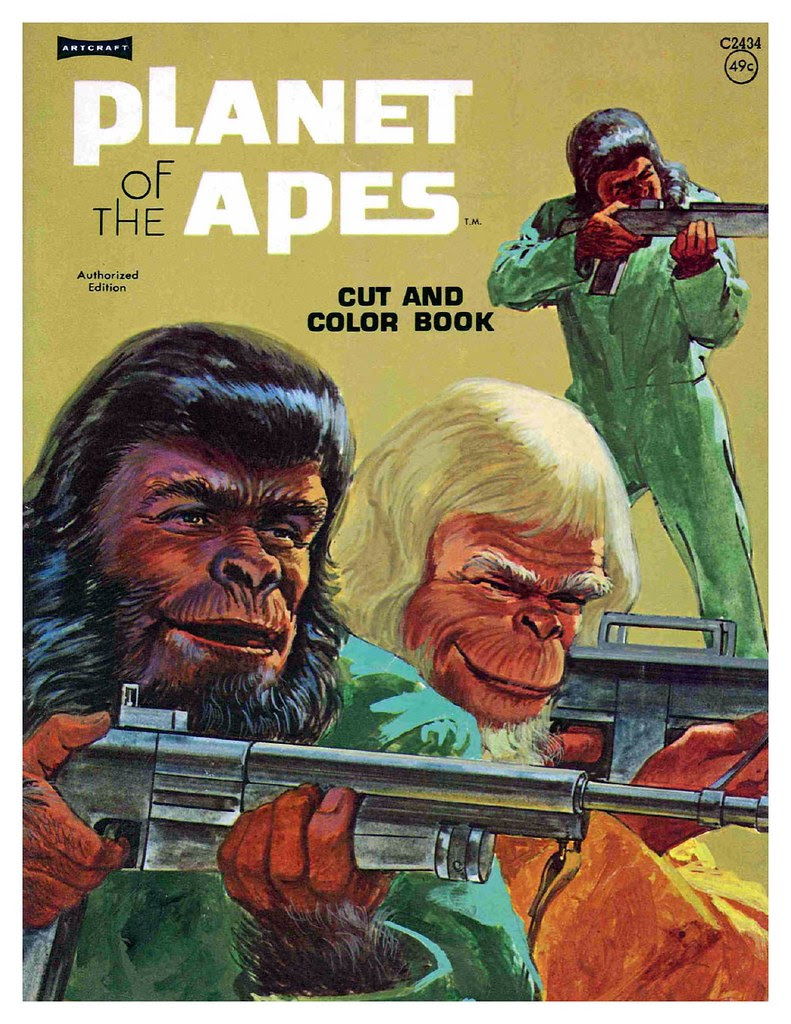 Email ThisBlogThis!Share to TwitterShare to FacebookShare to Pinterest
Labels: childrens book theatre, planet of the apes

You're getting some bonus Comic Reading Library posts this month, because I just don't have anything to Rant-Itorialize about at the moment! 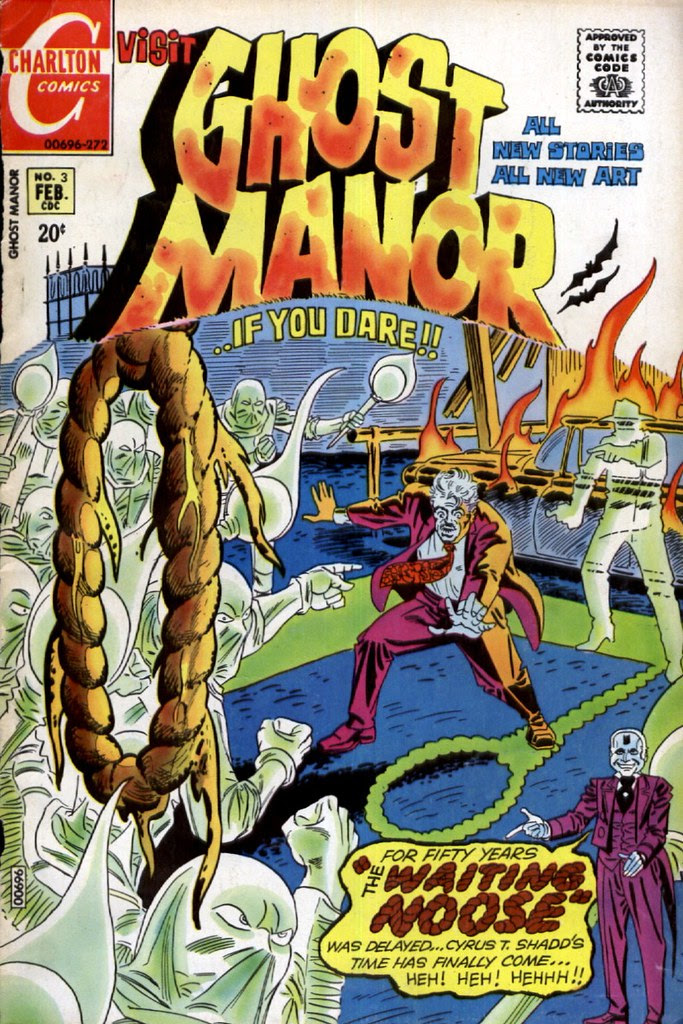 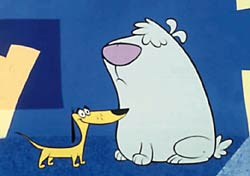 Breed: Big Dog was a sheepdog, Little Dog was a dachshund.

Other Appearances: I don't know if they appeared outside of the show or not.

Biography: Big Dog and Little Dog are friends who are, as you might imagine, not that bright. Big Dog doesn't talk as much as Little Dog – Little Dog mostly talks about food. Big Dog's actual name is Jonathan, and is is capable of herding sheep. He's usually too lazy to do anything, but he's also very strong. Little Dog is energetic and hyperactive, and is afraid of cats. He doesn't know his name, but does know a little about history. In their adventures, they often run into Kenny Fowler (a small skinny kid with glasses who often needs the dog's help), Hollywood (a large man who likes to point out others mistakes, saying, “Well, isn't that cute? BUT IT'S WRONG!”), Cubby (a fat teenager who helps the dogs with questions and problems), and Red (a small, meek little girl they encounter, who speaks one word in each sentence much louder than the rest of them). Often, these characters are assuming different roles when they're encountered.

Powers: None, unless you count Big Dog's strength.

Group Affiliation: Each other.

Miscellaneous: I didn't see the show when it originally aired, but I did catch reruns on Cartoon Network. I thought it was funny, myself! This show helped launch the careers of Genndy Tartakovsky, Craig McCracken, and many others. Brad Garrett voiced Big Dog, while Mark Schiff voiced Little Dog. A segment on the show was an updated version of Secret Squirrel, called Super Secret Squirrel. 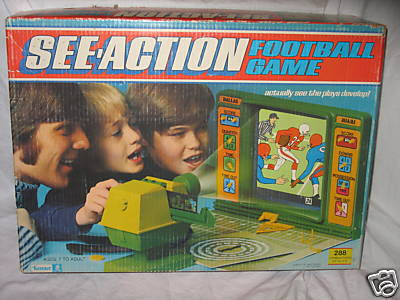 First up in this edition of "Cool Stuff" is Kenner's See-Action Football, which is another variation on the Give-A-Show Projector, and probably intended to compete with the then-popular electronic football games! 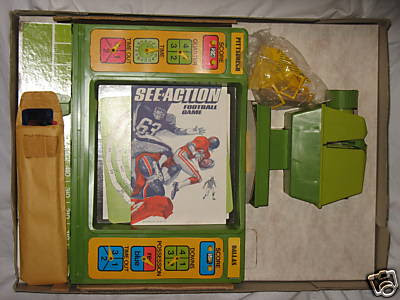 There were at least two versions of this game, one featuring O.J. Simpson on the box!

It's time for a BUNCH of GI Joe stuff! What a mix of military and Adventure Team stuff I have for you! 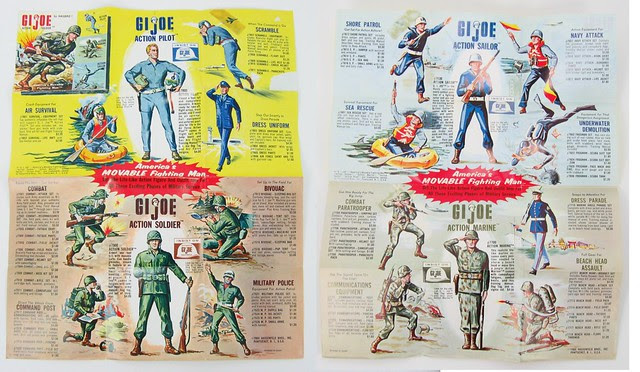 First up, this spread from the Equipment Brochure!

First up this time around, some Japanese lobby cards from Godzilla Vs. Mechagodzilla! 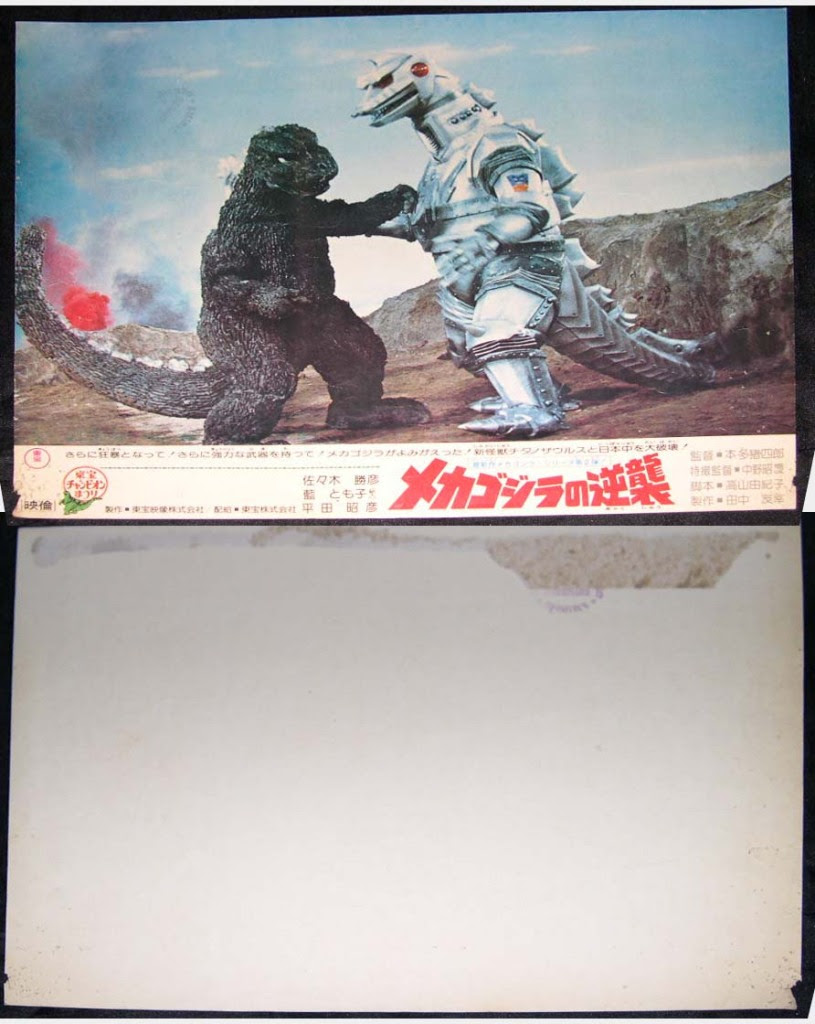 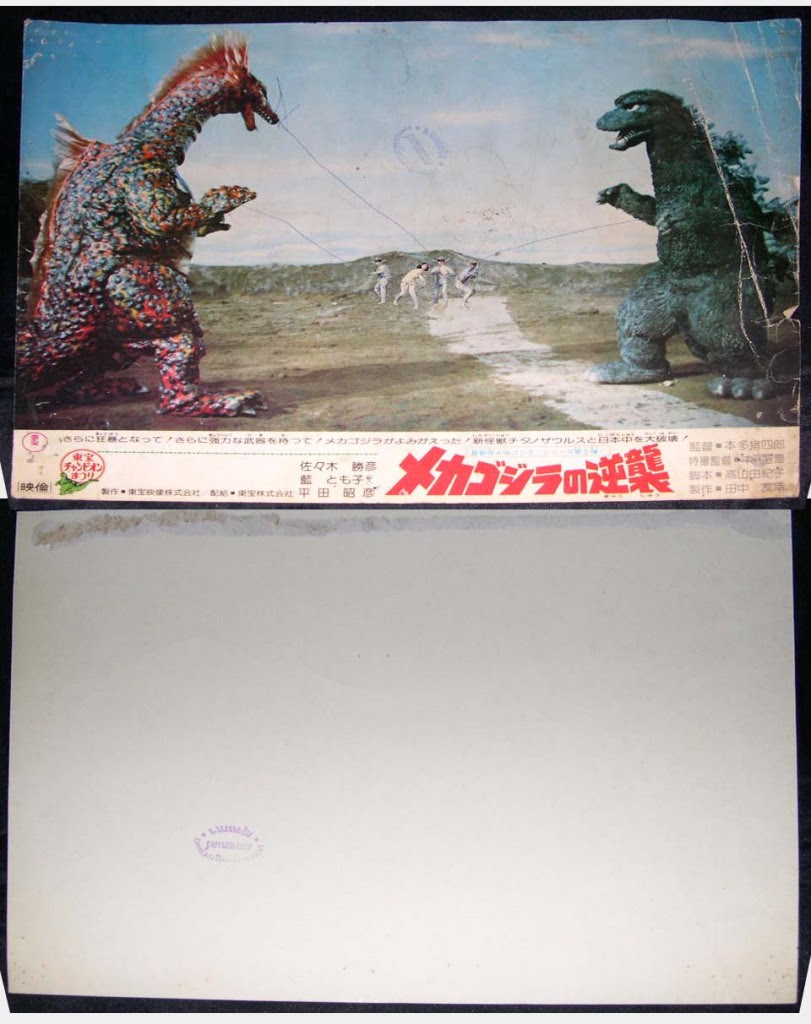 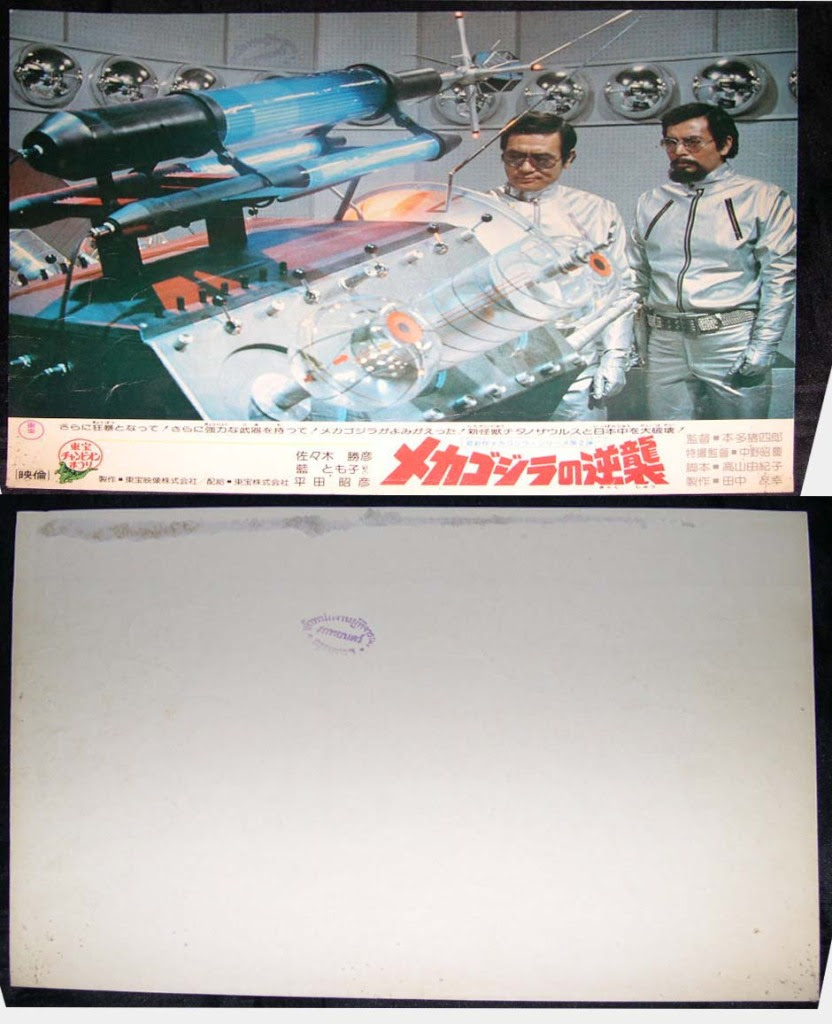 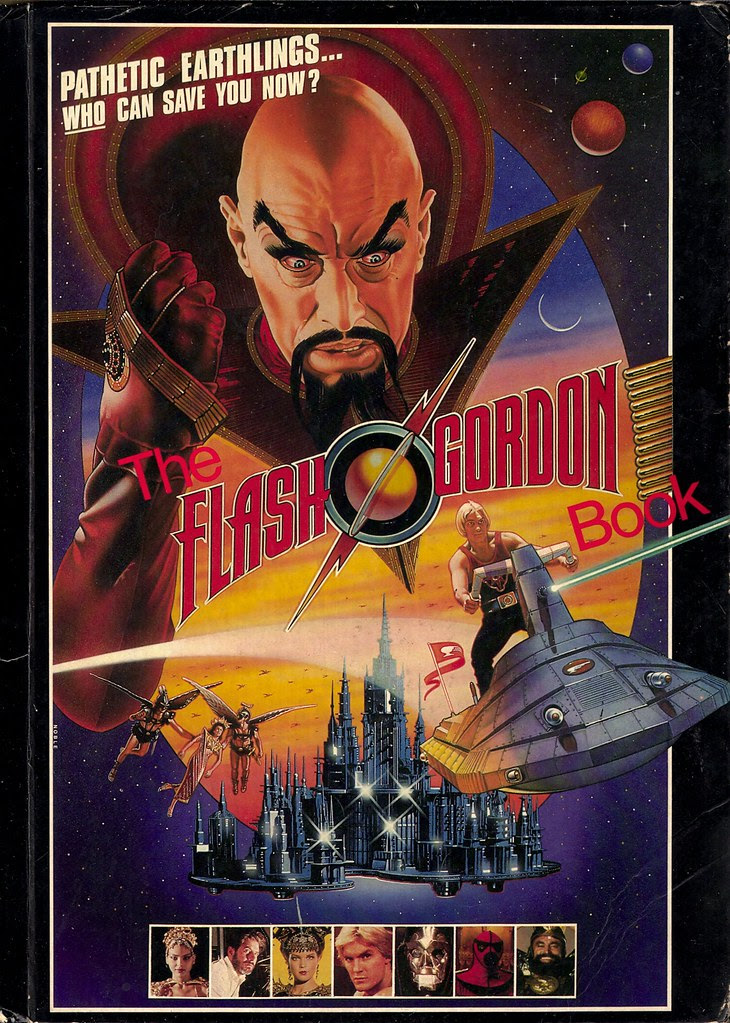 Fire up your Queen music!