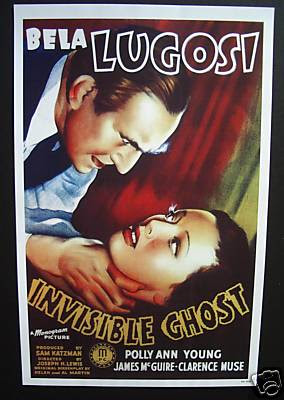 This time around, we start with this poster for The Invisible Ghost!
Click for more ->
Posted by Jon K at 12:01 AM 2 comments: 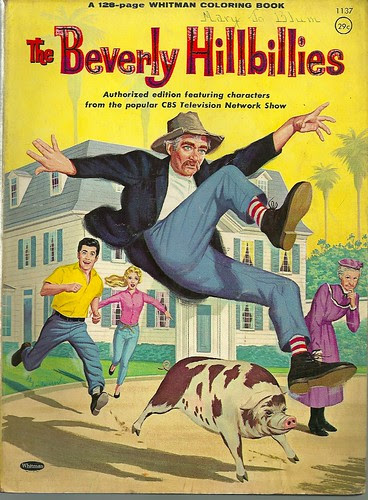 The Monkees, Season 1, Episode 7: "Monkees in a Ghost Town"

This episode was written by Robert Schlitt and Peter Meyerson, and was directed by James Frawley. The Monkees' songs performed in the episode are "Papa Gene's Blues," written by Michael Nesmith, and "Tomorrow's Gonna Be Another Day," written by Tommy Boyce and Bobby Hart as well as "(Theme From) The Monkees" by Boyce and Hart. Both are from the Monkees' debut album. In addition, two other songs are performed by the guest cast, "Everybody Loves My Baby" by Spencer Williams and Jack Palmer (it's a jazz standard) and "Hi Neighbor," by Warren Tucker (incidentally, that latter song was first performed in the movie "San Antonio Rose," which had Lon Chaney Jr. as one of the stars!). The guest cast in this episode are Rose Marie as Bessie Kowalski, Lon Chaney Jr. as Lenny, Len Lesser as George, and Hollis Morrison as 1st Cop. 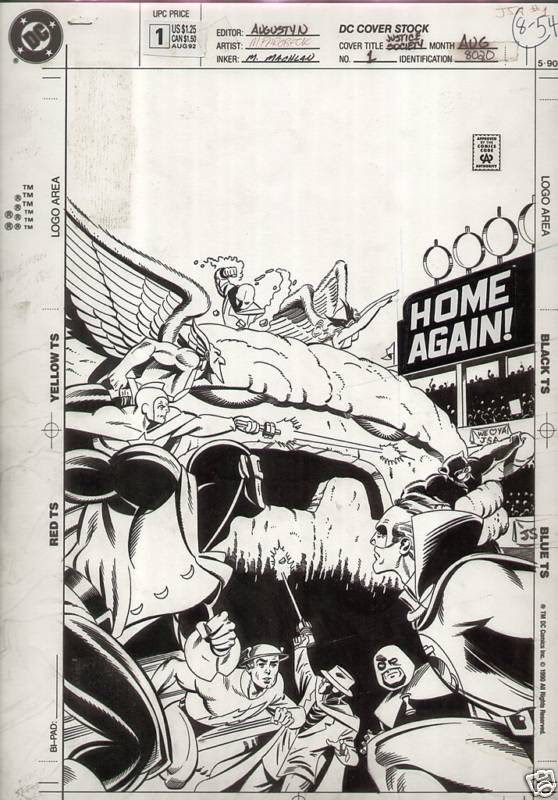 Justice Society of America #1 cover by Mike Parobeck!
Click for more ->
Posted by Jon K at 12:01 AM No comments: 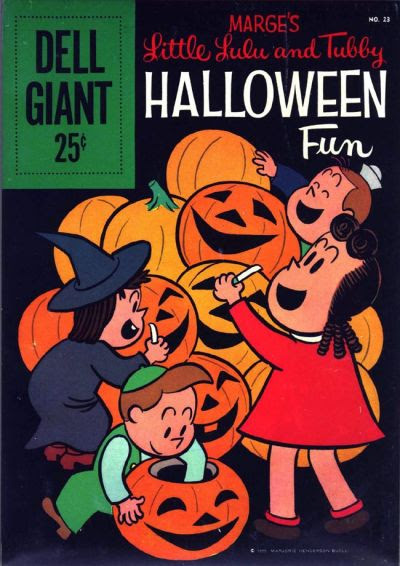 Some seasonal comics reading for you! 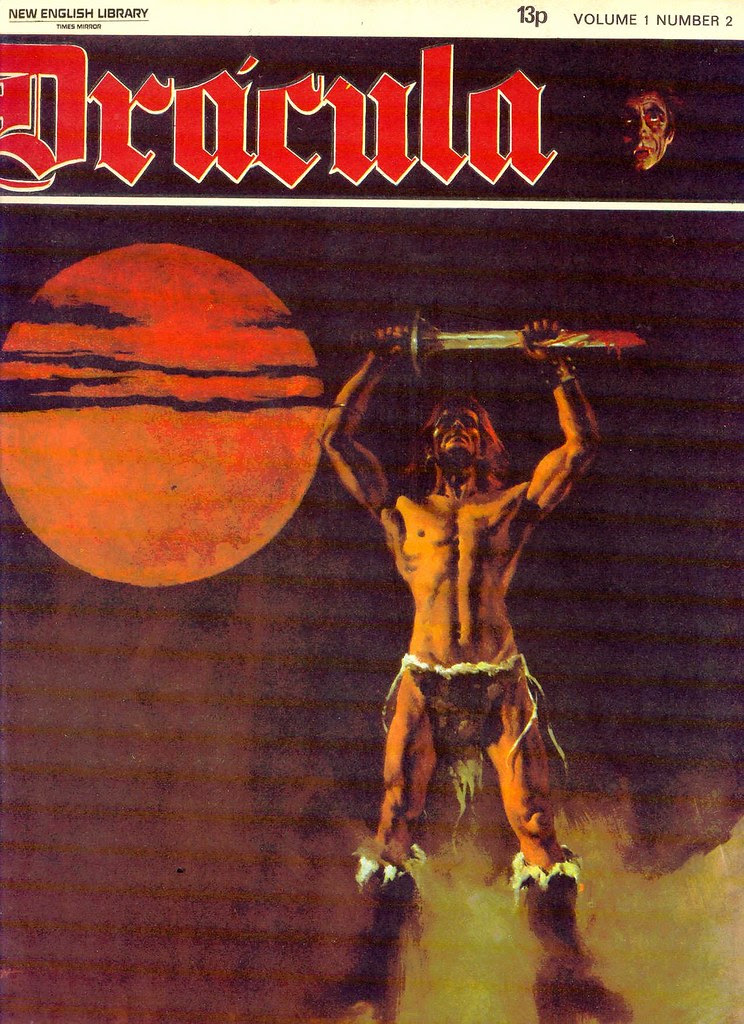 The Things You See in Old Comics... 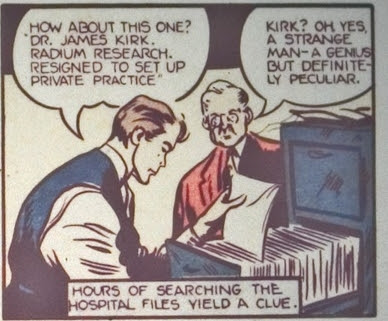 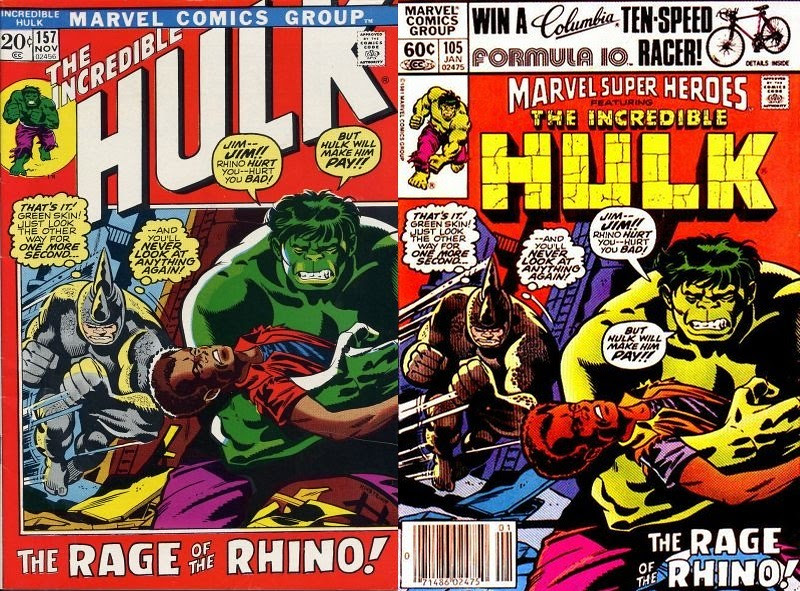 First up this time, we have Incredible Hulk #157 and Marvel Super-Heroes #105! This is a prime example of how coloring can make a cover look completely different! The lighter green on the Hulk in the reprint almost makes it look like he was redrawn instead of reprinted and recolored! Oh, there are changes... to eliminate the frame on the original cover, the Hulk and Jim were shifted down a bit, with the rest of the art extended, and then the text box letters were re-organized. Otherwise, other than the placement of the Hulk's word balloons, I don't see any real changes!
Click for more ->
Posted by Jon K at 12:01 AM No comments: 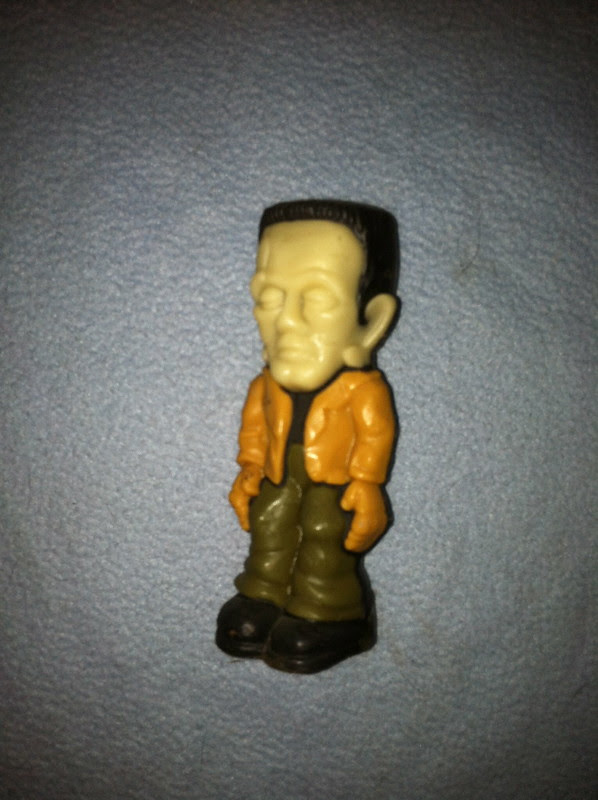 Yes, that's right, he's an air freshener, but I'm including him in My Toys anyway! My blog, my rules!

Remember last time I mentioned being lucky sometimes? This was another case... summer of 2011, my wife and the kids and I were in Tacoma hitting some garage sales before getting together with my mom. Now, at the time, we had four kids -- our two adopted kids, Tristan and Desi, and two foster kids (who were almost one and two at the time, and as of this writing, I don't know where they'll be by the time you read this). Now, going to garage sales with kids that are three and under is a challenge, especially when they fall asleep in their car seats. You can't just leave them in the car and go browsing, and you don't want to wake them up when they're napping!

So we usually compromise, and at alternate stops, either Jessi or I will wait in the van while the other goes to look with Tristan and Desi. This particular sale, it was my turn to wait with the little ones, and after a few minutes of browsing, Jessi comes back with this large Zip-Loc bag to show me and says, "Do you want these?" Inside, there was a witch candle, a witch air freshener.. and this guy! I could care less about the witches, but I definitely wanted Frankie, having seen this on eBay many times (so I knew exactly what it was). The seller only wanted a buck for all three items, so it was a no-brainer!

How big a no-brainer? Well, as I'm writing this, there's one on eBay in the exact same condition with a buy it now price of $21.50! And no, I don't think I'd be willing to sell mine for that price, either! It's the oldest Frankenstein item I have in my collection, and in my collection it stays (although I'd imagine once I've passed away, it'll be part of many things my wife and kids will be auctioning off).

Email ThisBlogThis!Share to TwitterShare to FacebookShare to Pinterest
Labels: halloween, My Toys

Last time around, it was the introduction to the Dell Trading Post, and now here's a follow-up from Wagon Train #12! 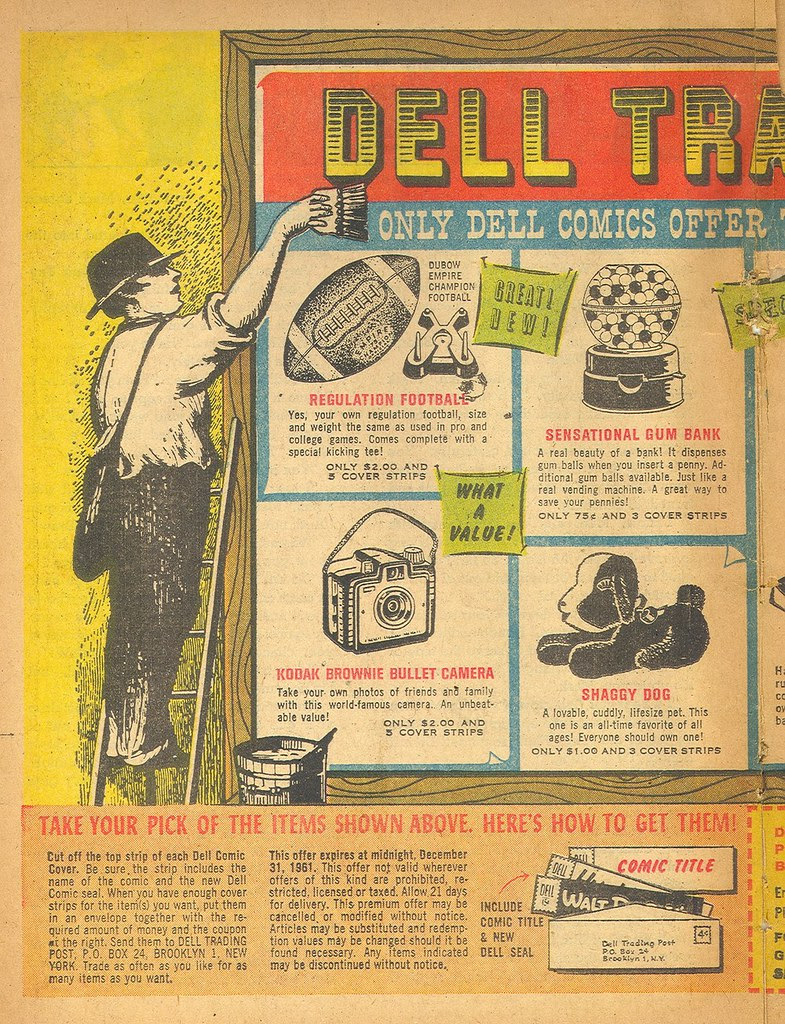 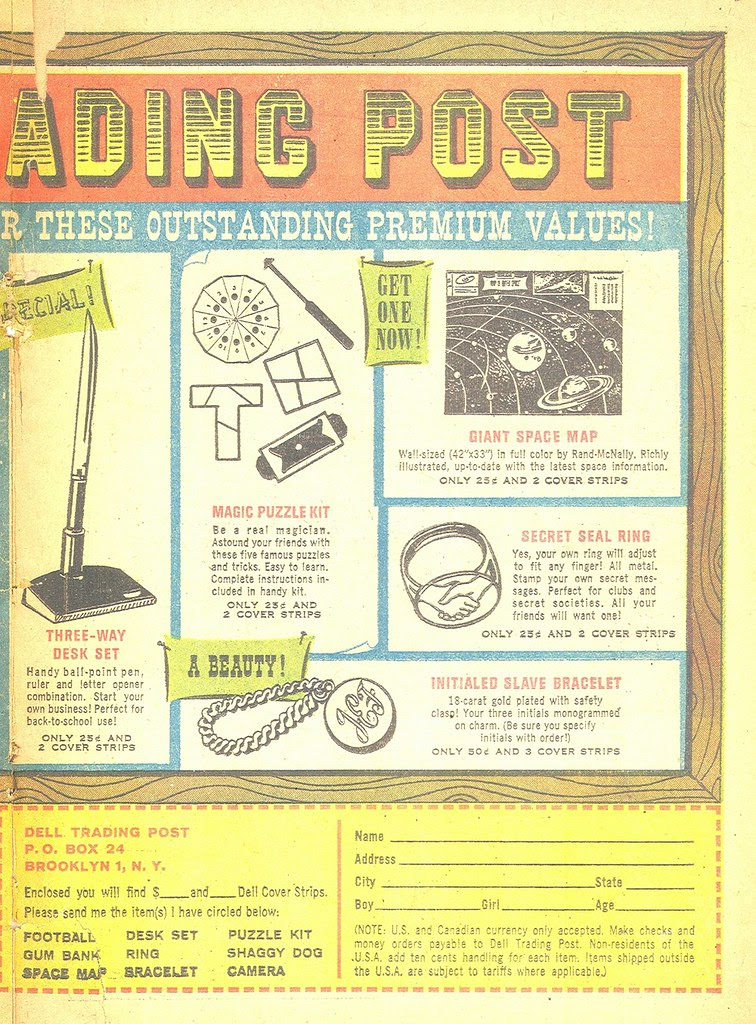 OK, from our modern-day perspective, nothing here was worth cutting up old comics... but back in the day, I'd imagine a lot of kids wanted to participate in this!
Click for more ->
Posted by Jon K at 12:01 AM No comments: 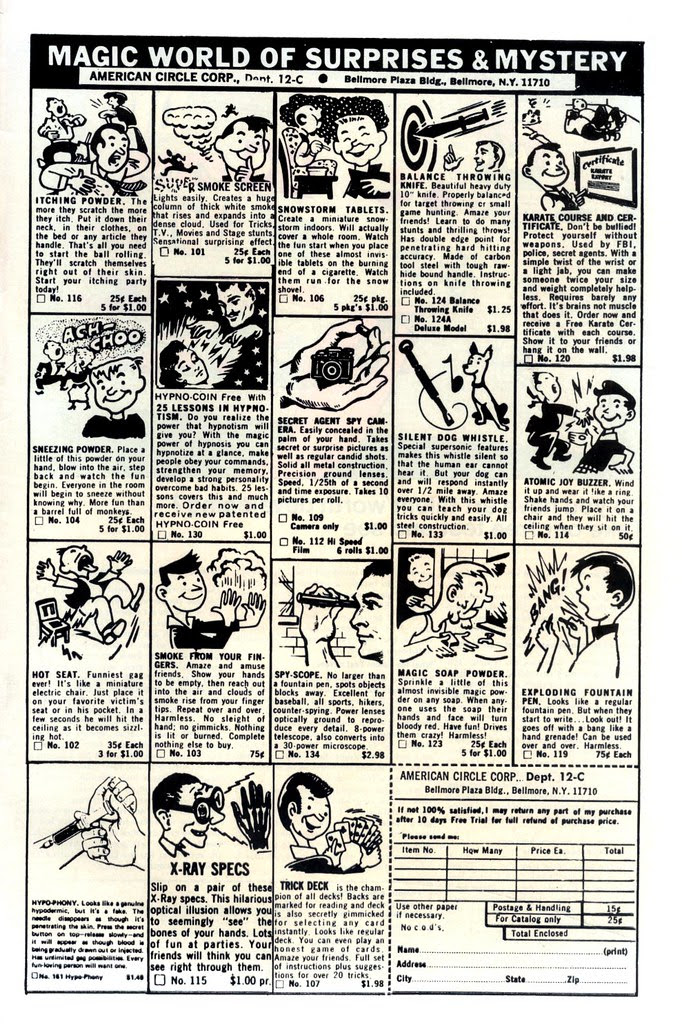 First up this time around, here's an ad from Dell's "Thirteen" #28, and as you can see, it's another ad from one of Johnson Smith's competitors! Amazing how many of these there were, isn't it? How could anyone choose which place to buy X-Ray Specs from?
Click for more ->
Posted by Jon K at 12:01 AM No comments: 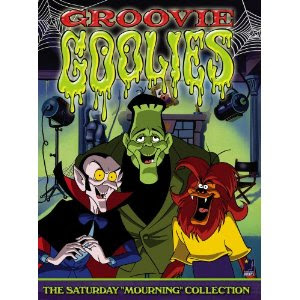 Drac (Voice of Larry Storch): Short-tempered vampire, head of Horrible Hall. Often, his first appearance in a show was flying in bat form towards a window, which would move out of his way (causing him to remark, “This place is driving me batty!”). Plays the keyboards in the band.

Frankie (Voice of Howard Morris): Mellow Frankenstein's Monster, often zapped by lightning (which would show mechanical innards, and cause him to remark, “I needed that.” Maybe it's just me, but Frankie appears to be drawn as a caricature of Lou Scheimer! Plays the drum/xylophone in the band. 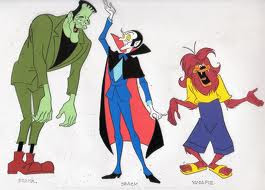 Wolfie (Voice of Howard Morris): Hippie werewolf who enjoy surfing and driving his Wolfwagon. Plays a sort of hybrid guitar/harp.

Hagatha (Voice of Jane Webb): A fat witch, known for her cooking. Her enchanted broom is named Broomhilda. 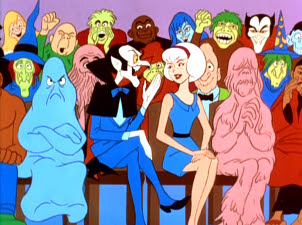 Mummy (Voice of Howard Morris): Good-natured mummy who tends to get (literally) unravelled.

Boneapart (Voice of Larry D. Mann): Skeleton in a Napoleon hat who goes to pieces.

Batso and Ratso (voiced by Larry D. Mann and Larry Storch): Fanged brats with a penchant for practical jokes that often backfire.

Sabrina Spellman (voice of Jane WEbb): Occasional guest-star, because the Goolies were a spin-off of her show. Best known for being a teenage witch. 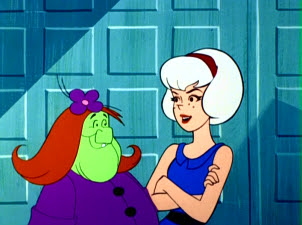 All the usual Filmation stuff aside... I've covered Howard Morris' career before, but as a reminder, some of his role included the title character and others on Beetle Bailey (1963), Ernest T. Bass and others on The Andy Griffith Show, and Gopher on Winnie the Pooh. I just covered Larry Storch in the Ghost Busters installment, so you can look him up there. Jane Webb, on the other hand, I haven't covered before... she voiced Cindy Lindenbrook in Journey to the Center of the Earth, Erica Lane on Fantastic Voyage, Betty, Veronica, Big Ethel, Miss Grundy and others on The Archie Show and the various permutations of that, Batgirl and Catwoman in The Batman/Superman Hour, Wanda Kay Breckenridge and Aunt Gertrude on The Hardy Boys (1969), Geraldine Lewis and Rhonda on Will The Real Jerry Lewis Please Sit Down, Aunt Hilda and Aunt Zelda on Sabrina, The Teenage Witch and other shows, Ping and Pong the Pandas as well as Babs on The Brady Kids, Laura Turner on Lassie's Rescue Rangers, Katy O'Hara and Lorelei Brown (and others) on My Favorite Martians, and Ginger Grant on The New Adventures of Gilligan. She was continuing to do the Archie voices through the last of the Filmation Archie programs in 1978.

Writers on the show included Bill Danch, who wrote episodes of Mister Magoo, The Alvin Show, The Super 6, Spider-Man (1967-1968), Will the Real Jerry Lewis Please Sit Down, Archie's TV Funnies, My Favorite Martians, The US of Archie, Fat Albert and the Cosby Kids (as well as several Fat Albert specials), Ark II, and The New Adventures of Batman, as well as the movie Monster From the Ocean Floor; Len Janson also wrote episodes of Cattanooga Cats, Will the Real Jerry Lewis Please Sit Down, Fat Albert and the Cosby Kids, The Flintstone Comedy Hour, Speed Buggy, Lassie's Rescue Rangers, Hong Kong Phooey, Wqheelie and the Chopper Bunch, Star Trek (animated series), Uncle Croc's Block, Shazam!, Isis, Ark II, The New Adventures of Batman, The Space Sentinels, Tarzan (1976-1978), Jason of Star Command, Yogi's Space Race, and many others, and he wrote the Saturday Superstar Movie of “Daffy Duck and Porky Pig Meet the Groovie Goolies”; Jack Mendelsohn wrote the screenplay to Yellow Submarine, as well as episodes of Beetle Bailey (1963), Krazy Kat (1963), The Beatles, George of the Jungle, Abbott and Costello, Rowan & Martin's Laugh-In, Will the Real Jerry Lewis Please Sit Down, The Funky Phantom, The Roman Holidays, The New Scooby-Doo Movies, The Addams Family (1973), Shazam!, The Great Grape Ape Show, Wonderbug, and many others. 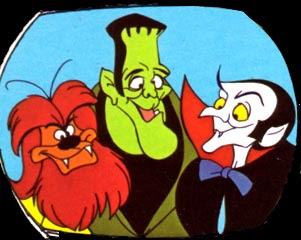 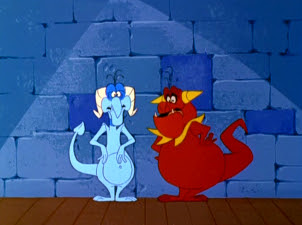 DVD Release: BCI/Eclipse put out a great complete series set a few years ago, with some wonderful special features, but of course, “The Saturday Mourning Collection” is now out of print, and will run you around $44 from Amazon. There's a single-disc set also available for much cheaper, but I don't know who put that out, and it's probably not complete. There's also two sets out called The Frightfully Funny Collection that have episodes of this plus the animated Ghost Busters, but again, there are no special features on those.

Website: http://www.groovie-goolies.com/ is worth checking out, although there's not much there other than Larry Storch reprising Drac's voice for an introduction.

Notes: This was another series that I was very happy to be a part of the special features for the BCI/Eclipse release, because my siblings and I LOVED this show! I did not realize that so many writers of this show were also Laugh-In writers, but given that it used a very similar format, I guess it's not surprising!
Posted by Jon K at 12:01 AM No comments: 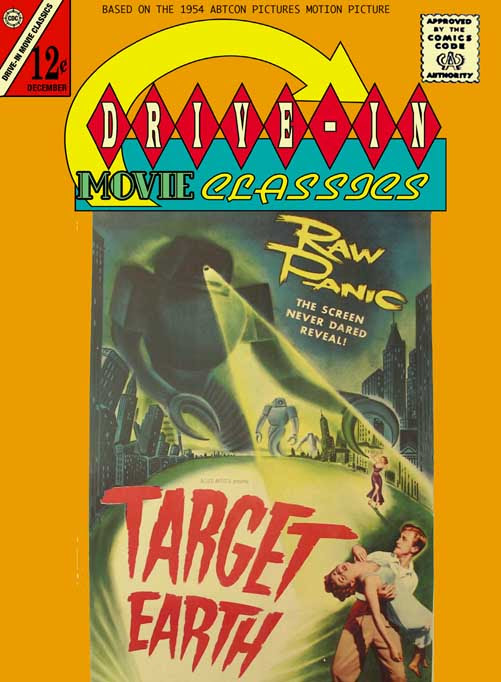 Email ThisBlogThis!Share to TwitterShare to FacebookShare to Pinterest
Labels: Comics They Never Made, halloween 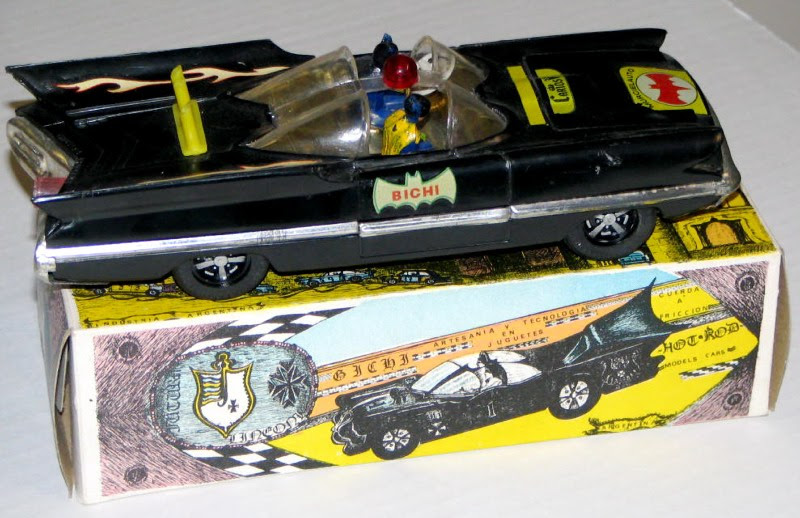 Typically, when I would come across a Batmobile toy from outside of the USA, it tends to get a little... well... weird, especially if it's from Italy. Fortunately, this "Bichi" Batmobile from Italy is an exception to that, and I think that it looks pretty darn cool, flames on the rear fins aside!
Posted by Jon K at 12:01 AM No comments:

Dog of the Geek: Fauntleroy!

Biography: Fauntleroy was the dog owned by Mrs. Taft, who would hire Peter Fox to dogsit him. The dog has a tendency to attack Peter.

Miscellaneous: Possibly the most vicious dog ever presented on the comics page? You'll notice there's no picture with this entry – because I couldn't find one of him! 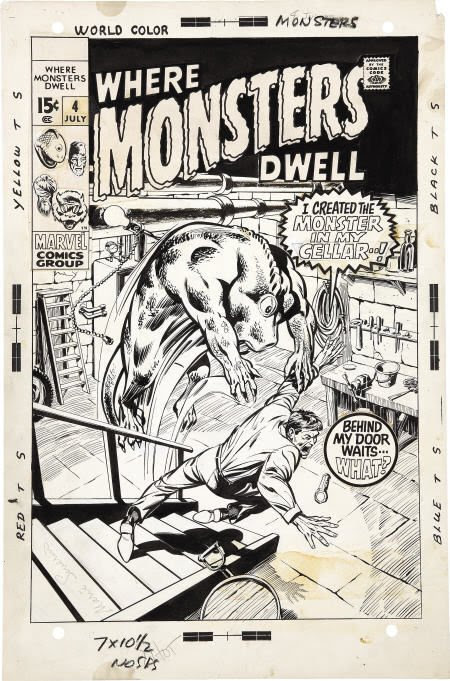 Cover to Where Monsters Dewell #4, by Marie Severin! 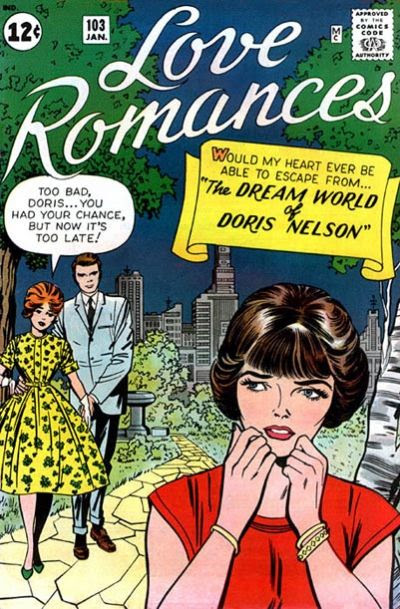 First up this time is Love Romances #103... and I have to wonder if after Jack Drew this cover, if someone changed their mind as to the copy... Surely, if Jack knew that the redhead was going to be so catty, he'd have given her an appropriate expression!