Saturday, I hit the road again, for about a month. On Wednesday, my dog Krypto will be getting surgery to remove some tumors and other growths... It's going to be weighing on me until I get the word that all is well, so keep those positive vibes coming, okay?
Posted by Jon K at 7:51 PM 8 comments: 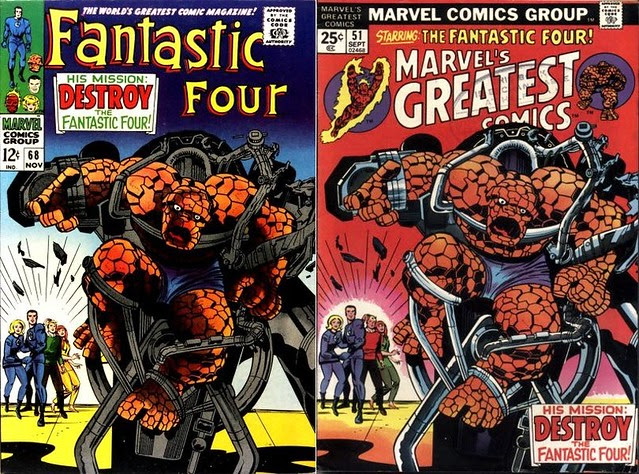 This time around, we begin with a look at Fantastic Four #68, and the reprint in Marvel's Greatest Comics #51. Now, I suspect that the scan for the original was a bit on the dark side, given how dark some of the shading on Ben is, especially compared to the reprint. Aside from coloring variations and where the blurb was located, I can't see any real differences here. 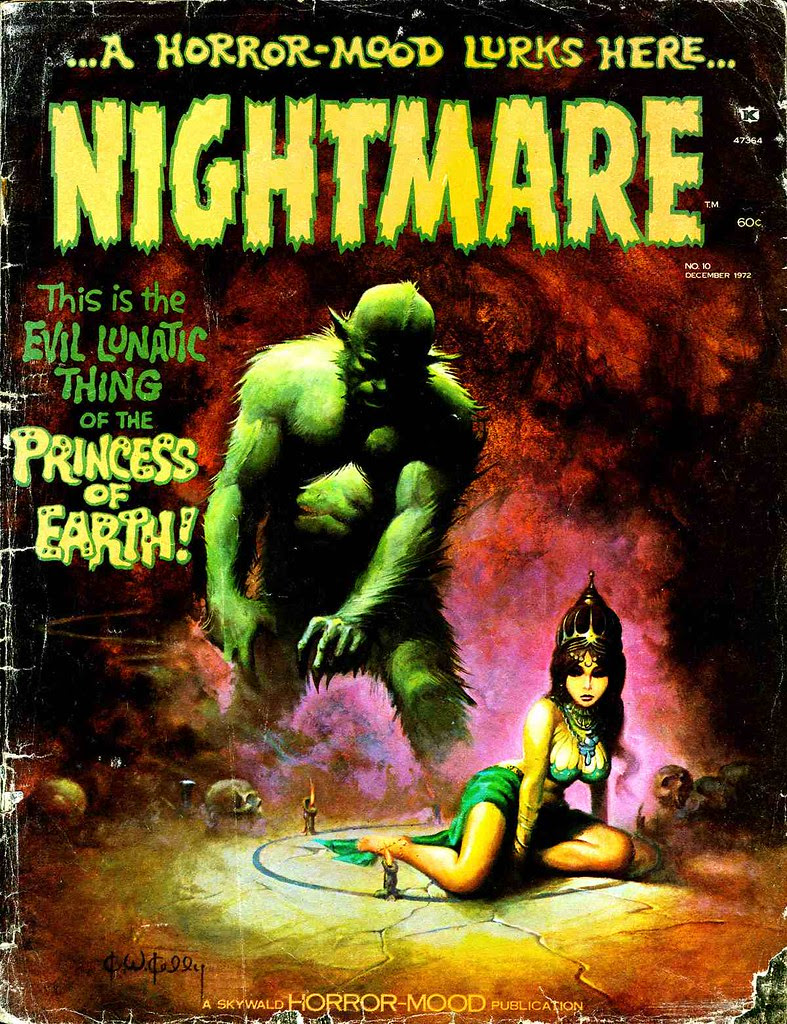 Wow, it's been a long time since I've done one of these... so let's get going! First of all, as I'm sure you've noticed, posts here have been getting a bit on the sporadic side lately. And by that, of course I'm not just referring to the low content mode of one post per day five days a week, but also that some days posts have showed up late... sometimes hours, sometimes days. If you scroll down from the main page of this blog, for example, you'll find the Kirby Kovers post that was supposed to run Thursday last week. All of this, of course, is due to my working as a truck driver. Oh, I will spot the problem when it shows up, but unfortunately, unless I'm home (as I am until Saturday morning), I can't do anything to fix them. While I have my iPhone and iPad with me, unfortunately Blogger's interface doesn't play well with either device... so until I can get home, I'm stuck cringing whenever I see the problem every day. I'd imagine that I've probably lost me some regular readers as a result of these various factors, too... and while I'd like to get them back again, I'm not sure what I could do on a practical basis to get my readership back where it was. For that matter, I'm not even sure at this point how much longer I'll be able to keep this blog going in any form! Currently, I've got posts done through the end of May... and I'm hoping to get June done in the next day or two, possibly July. I'm hoping I can at least bring back some of the features that have been disappearing for those posts, even if they're just temporarily taking the place of some posts that have continued to appear (the most likely candidate for this is Cliffhanger!, as I never get comments on that feature, and so I'm guessing it's the least popular thing I've been posting). We'll have to wait and see, I guess! How have the theme weeks been working for you guys? I received one comment on Kirby Kovers week, but that's been it so far. Let me know! I've been thinking I might do a Monkees week sometime, like I did a Planet of the Apes week several years ago. So far as the truck driving job goes, honestly, I really hate it... I'm away from home for weeks at a time, I know I'm not eating the healthiest of foods (although I seem to be losing weight despite that), I'm sure I'm not getting enough sleep on a regular basis, and my stress tends to be up there (especially when I'm dealing with situations that, if someone would listen to what I have to say once in a while, could be cleared up much faster). Fortunately, my being out doesn't seem to have had an adverse effect on the kids. The pay isn't great, especially considering that I'm spending about 40% of what I make on food and supplies I need on the road... and then there's the added factor that I can't always be home when I ask to be home. There's no way I'll be making it to the Emerald City Comic-Con this year (not that I can really afford it anyway), and I don't know if next year will be an option, for that matter... and it's anybody's guess what's going on with the Portland Comic Show that usually happens in November, especially now that a Wizard World convention's started in that area. I suppose I should just be happy that I have a job at all, right? I'm hoping that after doing this for a few years, I'll be able to take that experience and get either a local job that will have me home every night, or at least something that will not have me away for that long at a time. Once I've accomplished that, then there's a good chance that I'll be able to get some things back to normal, both at home and in this blog! I do have some future plans that I've been kind of half-working on... as many of you know, I love hitting garage sales, swap meets, flea markets and antique stores. Sometimes, I find things that I want to keep, but other times, I find things that I don't particularly want, but are cheap enough that I'll pick them up to resell at a later date. So far I've accumulated a fair amount of boxes of toys, books, etc. that eventually I'll either try to sell through this blog, on eBay, or at a table at a show. None of those options will really work while I'm away from home as much as I am, obviously! I'd love to be able to consider copying buddy Tony Isabella's Vast Accumulation of Stuff sales, but I don't think I have the readership for it, and also it would be a nightmare trying to deal with getting the items listed here, and then trying to keep track of who ordered what first, and then package things up here when I do get home, and hope there's been no problems in the meantime! Anyway... I think that's about enough out of me for now!
Posted by Jon K at 8:53 AM 1 comment:

Dog of the Geek: Reddy! 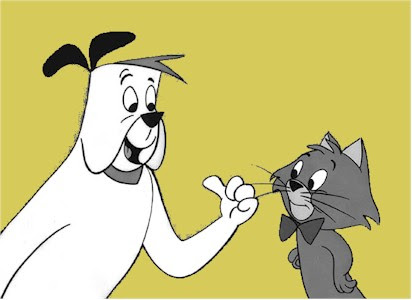 Other Appearances: Ruff and Reddy comic books, cameos in many other Hanna-Barbera programs, and a bunch of other merchandise.

Biography: Reddy, a less than intelligent dog, teamed up with brainy cat Ruff and the kindly Professor Gismo to deal with a variety of evil-doers and no-goodniks, such as Killer and Diller, Captain Greedy, Salt Water Daffy, and many others.

Miscellaneous: Ruff and Reddy was the first TV cartoon series marketed by Hanna-Barbera. 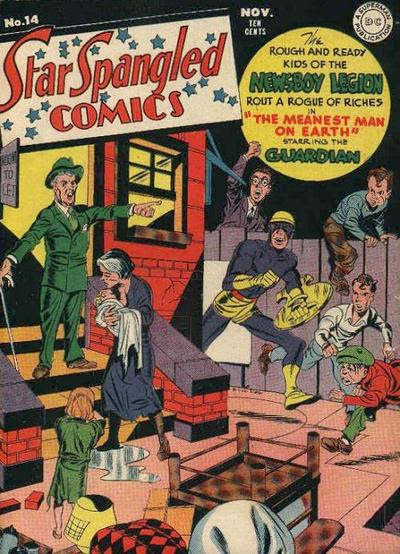 Here's the missing Kirby Kovers post from last week!
Click for more ->
Posted by Jon K at 12:01 AM No comments:

More of the "Red Bat" Batman cards this time around! 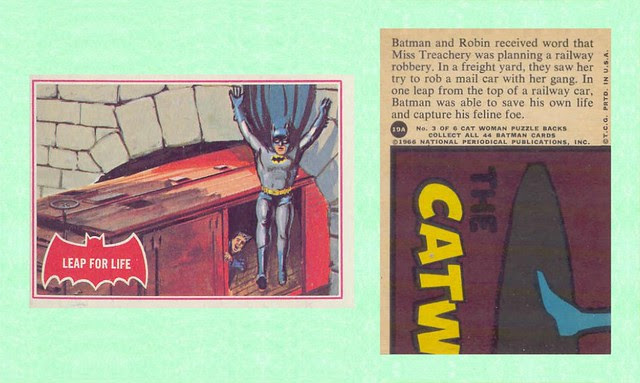 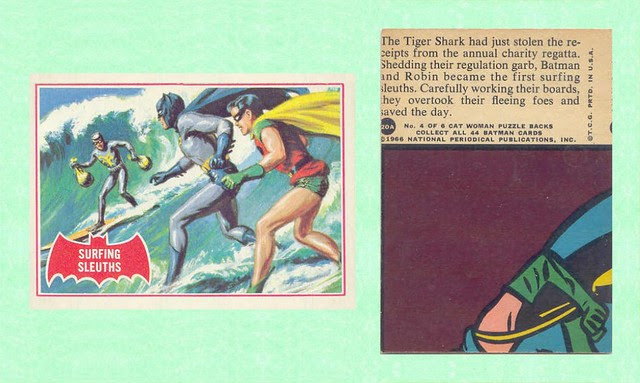 More Disney stuff this time around!