It's the last day of Cover Redux Week, and we begin with Amazing Spider-Man #25 and the reprint in Marvel Tales #20! At first, it looks very much the same, but the image has been shifted up, and the part of the Spider-Slayer with JJJ's face has been moved to the right! 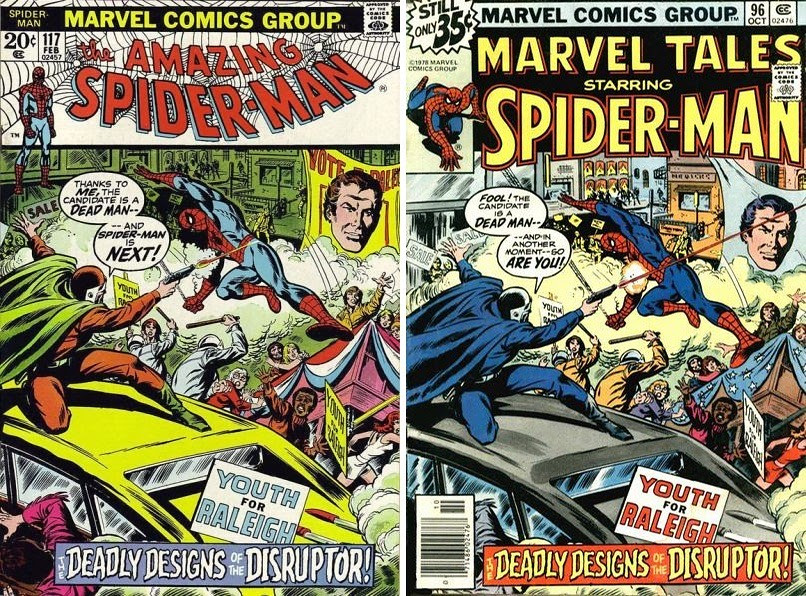 OK, let's get going here! First, we have Amazing Spider-Man #117, and the reprint in Marvel Tales #96! This cover has a number of changes made to it, the title blurb was altered to accommodate the UPC code, and the word balloon was changed... but there are a few other changes that you might not immediately notice! Look at Spidey's outstretched foot -- that's new! Also, the "Vote for Raleigh" banner above Spidey has no text at all -- and the bunting below Spidey is inexplicably changed from red, white and blue stripes to blue with white stars! Ah, and I noticed that the blast from the Disruptor's gun goes further on the reprint! There's no mention of anything on the Grand Comics Database about these changes, so it's a puzzle... 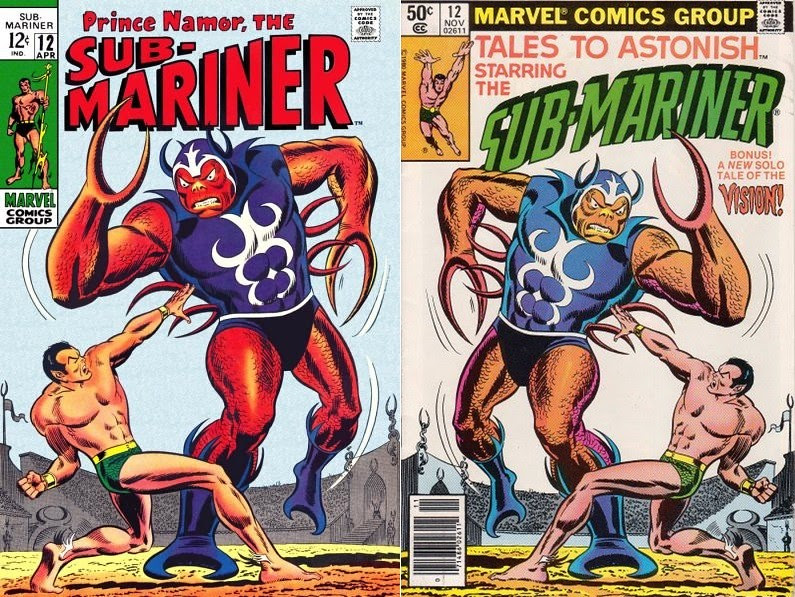 Next, it's Sub-Mariner #12 and the reprint in Tales to Astonish (2nd series) #12! Obviously, the image was flopped for the reprint, but also note that the alien creature's been reduced ... at least, somewhat reduced, anyway! Actually, looking at it again, it seems the image was overall reduced, it's just more obvious at the top than towards the bottom. 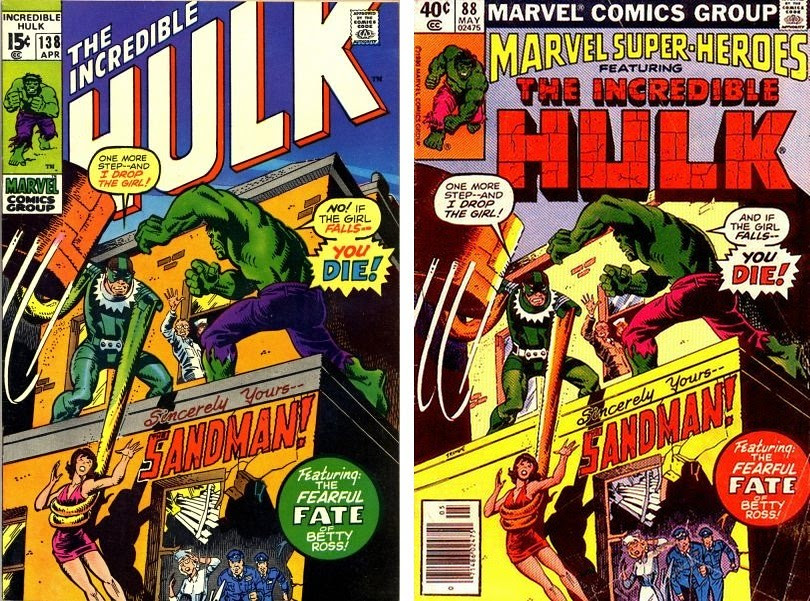 Up next, we have Incredible Hulk #138 and the reprint in Marvel Super-Heroes #88! I believe this was slightly reduced, with extra art added at the bottom (Betty's legs are more visible, as are Ross, Talbot and the Nurse in the window). 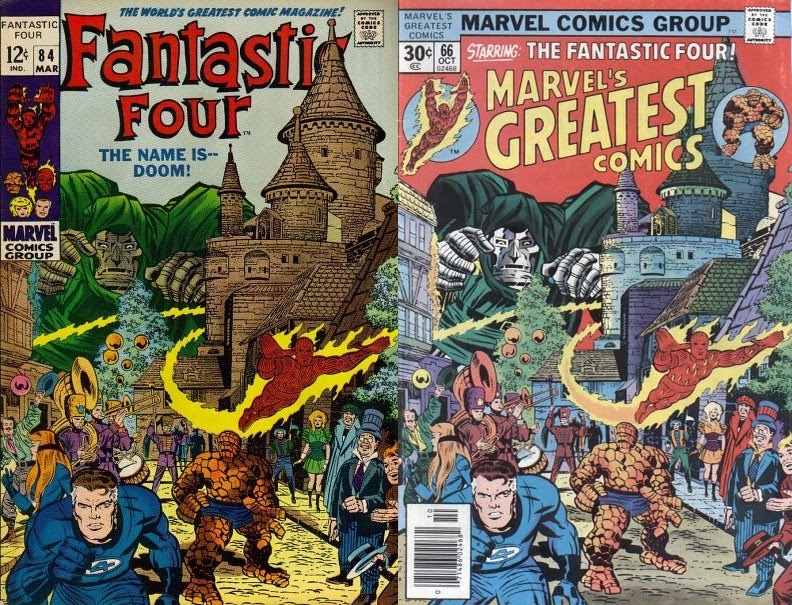 Next, Fantastic Four #84 and the reprint in Marvel's Greatest Comics #66! Looks to me like the stat was reduced slightly, with extra art added on the left and bottom. I'm kind of surprised they didn't relocate Reed on the cover, as the UPC box covers most of Reed's arm on the left! 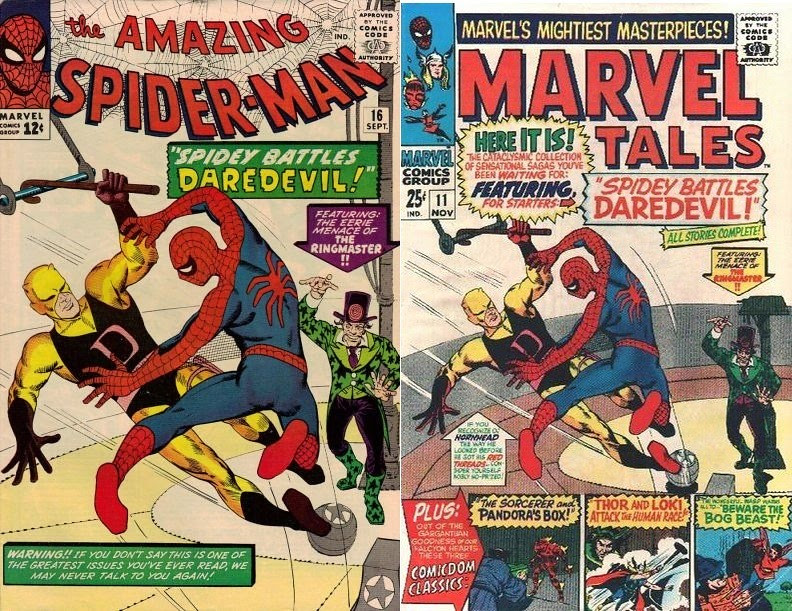 More changes were made when Amazing Spider-Man #16 was reprinted in Marvel Tales #11! The art was reduced, and the background altered so that Spidey and Daredevil were shown to be higher in the air, and the Ringmaster was reduced even more and placed on a platform up in the air. 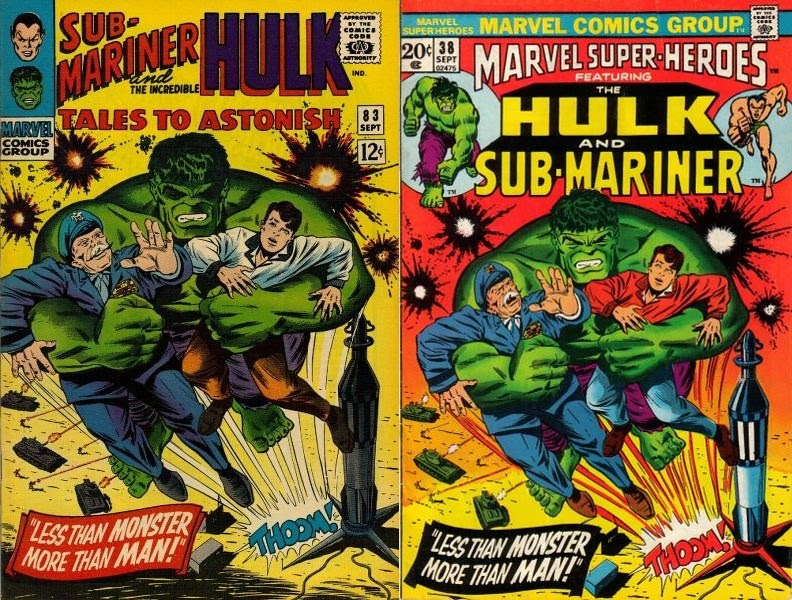 When Tales to Astonish #83 was reprinted in Marvel Super-Heroes #38, the image was reduced, I'm guessing to accommodate the larger logo. 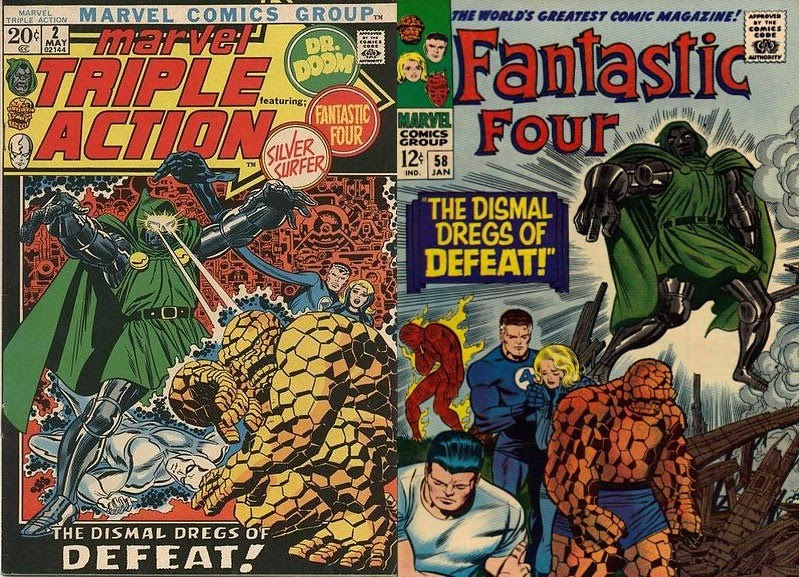 And finally, we have Fantastic Four #58 and the reprint in Marvel Triple Action #3! I'm not sure why I set this up with the reprint on the left, and the original on the right. Anyway, we're obviously dealing with an all-new cover for the reprint... as usual, I like the Gil Kane cover, but I think the Kirby cover was even better! After all, the Doom figure on the original was used over and over after this!

One of the things I hate about being a truck driver (among the very many) is that when one has a blog, sometimes one can't get around to responding to blog-related matters in a timely manner. Well, I'm going to correct one of those right now, by thanking Jerry Chamelin for his very generous contribution on April 9 to Krypto's medical bills fund. I honestly don't recall if Jerry's ever commented on blog entries in the past, or if I've linked to his blog (if indeed he has one), so this came as a very pleasant surprise to me.

Jerry, I salute you! You are truly a Friend of Krypto, and I will be sending you a photo of Krypto in further appreciation as soon as I can get a good pic taken of him in his cape and printed!
Posted by Jon K at 9:40 AM No comments:

The Lady and Her Monsters: A Review!

I promised a more in-depth review of this book, and since I'm home at the moment, now is the time!

As I believe I mentioned as I was reading this book, it's a fascinating look at the life of Mary Shelley, the author of Frankenstein, as well as the various events that may have provided inspiration for this book.

I'd never read much about Mary Shelley's life prior to this, and author Roseanne Montillo really brought her to life for me. Honestly, you'll find yourself feeling sorry for her after learning about the tragedies that Shelley could never quite get away from, as well as those that she could never recover fully from.

Reading this book, you'll learn about galvanism as well as the history of body-snatching that accompanied it, as surgeons experimented with electricity on cadavers (human and animal) and how it affected muscles even after death, as well as how they hoped to use electricity to bring the dead back to life.

You'll learn about Shelley's family history, her upbringing, travels, and her love and marriage to poet Percy Shelley.

It was a great read, and a book I'm happy to add to my bookshelf. I highly recommend it to any fan of Frankenstein! You can get a copy for yourself by ordering from the Amazon link below (which I'll get a small cut of eventually), but since I was provided two copies of this book for my review, I am pleased to announce that you can win the second copy of the book from me!

Here's what you have to do: Shoot me an email at waffyjon at comcast dot net with the subject line "Frankenstein Book," and provide your full mailing address. I am also going to be giving additional entries to anyone who contributes to the Krypto Medical Bills Fund (link in the upper left hand corner) any amount of $5 or more.

This contest will end around midnight PST Sunday night, April 26, 2013. I will be drawing one name at random, and notifying the winner via email. Contest is open to all readers of Random Acts of Geekery in the USA only (sorry, it's just a pain to deal with customs forms). 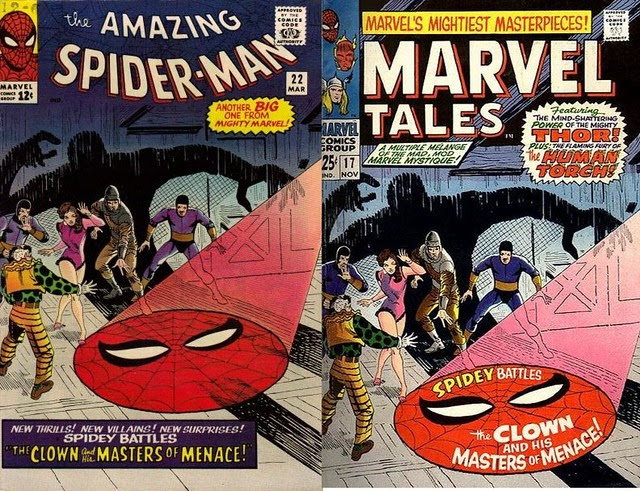 First up this time around, we have Amazing Spider-Man #22, and the reprint in Marvel Tales #17! Obviously, the art was shifted down for this reprint (with some extra art added to the top). The blurb that was on the bottom of the cover has been cleverly fit into the Spider-Signal on the reprint, but other than that, it's all blurbs! 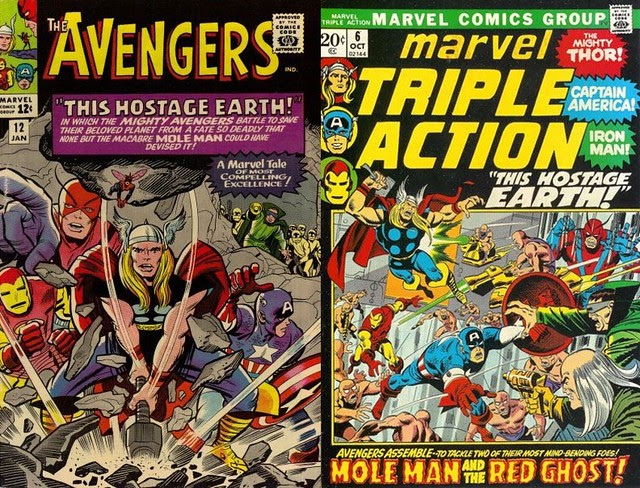 This time around, we begin with Avengers #12, and the reprint in Marvel Triple Action #6! Obviously, we're looking at a completely new cover here... and it appears to my eye that, once again, the Wasp was left out of the new cover. 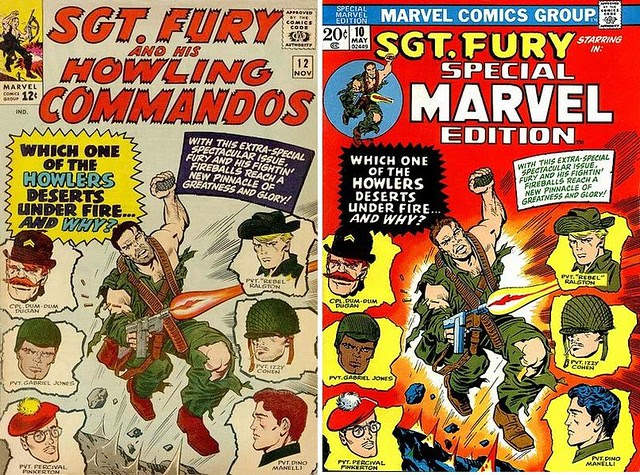 Yes, it's a whole week of Cover Redux installments! We begin with Sgt. Fury #12, and the reprint in Special Marvel Edition #10... I believe the original art was statted and reduced slightly, and the blurbs were also reduced.