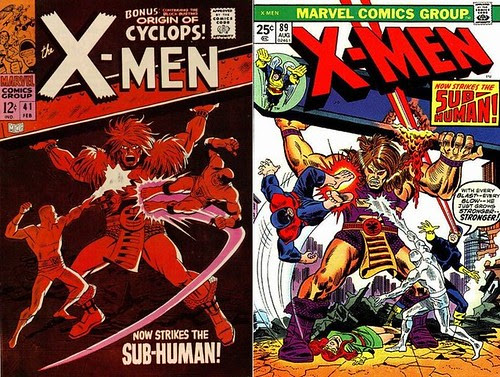 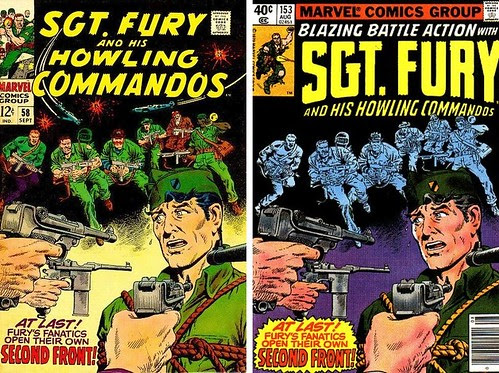 I have no idea why the heck a burst was added around the blurb when Sgt. Fury #58 was reprinted in #153... although this is one of the rare times when I like the coloring on the reprint more than the original. Note that the plans and bomb bursts were removed for the reprint. 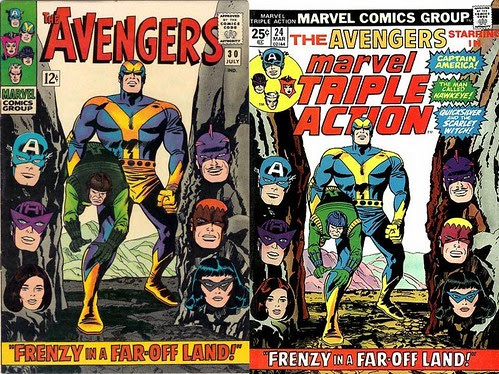 Next, we've got Avengers #30 and the reprint in Marvel Triple Action #24... As you can see, the whole image was reduced a bit, as well as shifted down. New art was added above the floating heads, and the figure of Goliath and the man he's holding has been reduced even more, with new background added (probably easier than trying to add to what was originally there). The extra detail on the ground makes me think that most of that was added for the reprint, too. 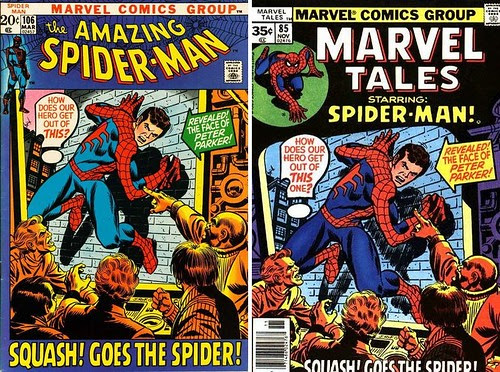 Next up, it's Amazing Spider-Man #106 and the reprint in Marvel Tales #85. Obviously, the reprint book got cut off at the bottom by the scanner who did the cover scan for the Grand Comics Database. here it's a case where the people watching were shifted down, while the background (including the screen) got enlarged quite a bit. Also note that the arm of the man pointing has been rotated! One can also note how the coloring of Spidey's costume features a darker blue on the reprint, although that might have been as a result of the scanning. 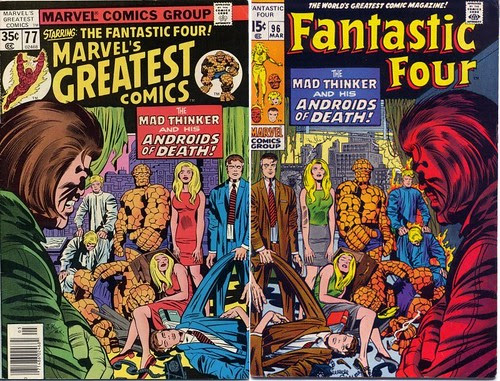 And we end with Fantastic Four #96 and the reprint in Marvel's Greatest Comics #77, and yes, I know I put the reprint on the left this time. As you can see, this was a pretty simple flip job, with the blurb relocated. Note that the curtain above the Johnny Storm android has been redrawn for the reprint, as are the buildings seen through the window. It also appears the piece of furniture between Sue and Ben was reworked, as was some of the stuff on the floor (someone added what appears to be a clock just below Reed's head, replacing his dropped pipe. The dying flames were moved from Johnny's figure, too. I almost have to wonder... did the reprint use the actual original art, statted before changes were made for publication? The background buildings on the reprint look more like Kirby buildings than the original ones do. The Grand Comics Database says the reprint cover is a re-creation of the original cover, and that the original cover has elements done by Marie Severin, and those buildings definitely look more like her work.
Posted by Jon K at 12:01 AM