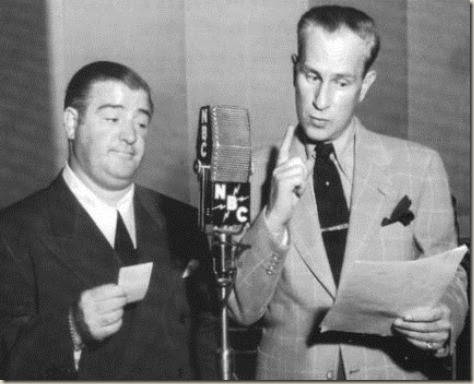 Bud Abbott and Lou Costello first worked together in 1935 at the Eltinge Burlesque Theater in New York City. They hadn't been partners at the time; Costello's regular partner was ill that night. The performance was so successful that members of the cast (including Abbott's wife Betty) encouraged them to make the partnership permanent. They quickly established Abbott as the straight man, and Costello as the stooge. They first appeared on radio in February 1938, on The Kate Smith Hour. Believe it or not, their voices were so similar that it was hard to tell them apart due to the speed of their act. This was solved by Costello affecting a higher pitched voice. The classic “Who's On First?” was first performed on radio the following month, and stayed on the program as regulars for two years.

In 1940, the duo had the summer replacement spot for Fred Allen (back in those days, there were no reruns, so during the summer, a replacement show would come on until the fall). They had their own NBC show two years later, but before that, Universal signed the duo to a long-term contract, and their first film in that contract, Buck Privates, was so successful that it saved Universal from bankruptcy!

Back to their radio career... in 1941, Bud and Lou joined Edgar Bergen and Charlie McCarthy on The Chase and Sandborn Hour, and two of their films were adapted for Lux Radio Theater. On October 8, 1942, their own weekly show was launched, sponsored by Camel Cigarettes.

As with most comedy shows of the time, Bud and Lou's program had musical interludes between the comedy (the best known was probably Connie Haines, but others included Ashley Eustis, The Delta Rhythm Boys, Skinnay Ennis, and the Les Baxter Singers). Connie and Skinnay also appeared in the comedy segments of the show itself. The best-known character on the show outside of Bud and Lou was probably Mr. Kitzel, played by Artie Auerbach, but if you listen carefully, you'll catch Mel Blanc in multiple roles! Ken Niles was the announcer on the program, and also took place in the comedy bits. A regular role on the show was the character of Ken's wife, whom Costello routinely insulted. The show attracted quite a number of high-profile guest stars, including Frank Sinatra, The Andrews Sisters (who made multiple appearances; they were friends with Bud and Lou), and Lucille Ball.

The show moved to ABC in 1947, and they also added a 30-minute children's radio program, The Abbott and Costello Children's Show.

As you might expect if you're familiar with “Who's On First?”, pretty much every episode, a bit between Bud and Lou would include very similar wordplay, with Lou misinterpreting words that Bud was using to explain something topical to the episode. For example, one episode had Bud teaching Lou about horses, and how both male and female horses could be mudders, with some of the best mudders being male horses. Naturally, Lou interpreted this as being “mothers” spoken with a Brookyln accent. You can imagine what Lou thought when Bud talked about horses eating their fodder!

The final line of “Who's On First?,” Lou's “I'm a baaaaaad boy!” was often incorporated in the scripts as well. In several episodes, Lou would also play his own nephew, pitching his voice even higher than usual. It was rare that Lou and his “nephew” would appear in a scene together, and when they did, Lou's inability to keep track of which voice to use caused quite a bit of laughter!

Another regular bit on the show was the Sam Shovel mysteries, a parody of the Sam Spade mysteries, with Lou playing Sam Shovel. Aside from these, a common situation had Lou getting in trouble with the law (usually for something very minor, but Abbott would end up making matters worse). Bud's wife was often mentioned in the scripts, although to the best of my knowledge, she never appeared on the radio show. Lou's wife and children weren't a part of his character, at least not originally. Except when the show was running short on time (usually due to extra ad-libbing), Lou would end the show by saying hello to the folks in Paterson, NJ, which was his home town.

There could well be more Abbott and Costello radio shows available to download on the internet than any other show, with the possible exception of Jack Benny. You can find some of these at http://www.oldradioworld.com/shows/Abbott_and_Costello.php
Posted by Jon K at 12:01 AM