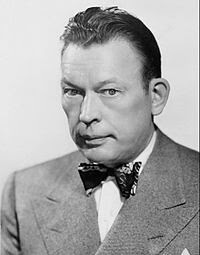 Fred Allen is one of my favorite radio comedians. His radio show, which lasted from 1932 to 1949, was absurdist as well as topical, the latter of which may make it rather inaccessible to modern-day listeners who aren't familiar with the history of the times; in my own case, I believe I've listened to enough old-time radio myself that it's not been an issue.

For fans of old-time radio, he's probably best remembered for his long-running mock feud with Jack Benny, who was in reality a close friend. Another close friend of his was Groucho Marx.

Fred was born John Florence Sullivan on May 31, 1894. As a boy, he took piano lessons, but only learned to play two songs. It was when he took a job at the Boston Public Library where he read a book about the origin and development of comedy, making him interested in learning more about that while also developing a skill in juggling. It was in 1914 when he began his stage career, taking the name Fred St. James and working the local vaudeville circuit, eventually changing his stage name to Freddy James. His early comedy style had him billed as "the world's worst juggler," purposefully juggling in a clumsy manner. As his performing career went on, he did less juggling and more comedy, and by 1917, he'd finally arrived at the stage name of Fred Allen. He went from vaudeville to Broadway in 1922, and met his future wife, Portland Hoffa, while performing in The Passing Snow.

Fred and Portland first performed on radio in the late 1920s, guesting on a Chicago program called WLS Showboat. From there, he and Portland went on to other radio programs, none of them lasting more than a year until 1935's Town Hall Tonight on NBC, which lasted until 1940. This hour long show featured news satires, parodies of popular musical comedies and films, and interpretations of well-known lives. In 1940, he changed networks to CBS, and changing the show's title to Texaco Star Theater. In 1942, the show was cut to half an hour. However, this same year Fred introduced his most long-running and famous feature, "Allen's Alley."

"Allen's Alley" was featured in the program after the initial monologue, a comic segment with Portland, and a musical segment. The segment began with Portland asking Fred what question they'd ask the residents of Allen's Alley that week, and then they'd meet the citizens, asking each of them the question of the week (usually relating to some topical event). It took a while before the characters in Allen's Alley would be fully developed, with some characters tried and discarded. The most famous characters were Jewish housewife Pansy Nussbaum, New England farmer Titus Moody, and Southern senator Beauregard Claghorn (who served as at least an inspiration for the Warner Brothers cartoon character Foghorn Leghorn).

As I noted, the mock feud between Fred and Jack Benny was a long-running feature on Allen's shows, and also took place on Benny's show as well. This feud began by accident in an 1937 show, when a child prodigy performed a violin solo that caused Allen to wisecrack about "a certain alleged violinist" who should hide in shame over his own poor playing. Benny, who was a regular listener, burst out laughing when he heard the gag, and responded on his own program. This led to the feud, which convinced some listeners the two (who were close friends) were really enemies!

One of my favorite bits of the feud was an episode of Allen's program which was announced at the beginning as a tribute to Jack Benny's career, but featured very little about Benny at all. Another favorite was in a 1946 episode in which Benny guested, disguising himself as Myron Proudfoot so that he could be a contestant on Fred's new quiz show so he could win money and prizes.

After his own show ended, Fred was a semi-regular on The Big Show, hosted by Talluah Bankhead, appearing on little over half of the episodes. It was on this show that he made his most famous joke about television, "You know, television is called a new medium, and I have discovered why they call it a medium -- because it is neither rare nor well done."

Fred tried to get a television program going on his own, but his program ideas either never made it to air, or failed quickly. He did make guest appearances on some shows (including one on Jack Benny's TV show, where he tried to convince the sponsor to replace Benny with him), and landed a two-year stint as a panelist on What's My Line? from 1954 until 1956, when he died. During this time, he also wrote newspaper columns and books, most notably Treadmill to Oblivion, that covered his radio and TV years.

Fred Allen was very influential on many other comedians, although in some cases I doubt that anyone was aware of the influence. One example would be on Johnny Carson's Tonight Show, where Carson featured "The Mighty Carson Art Players" in his sketches -- Fred's radio show featured sketches starring "The Mighty Allen Art Players." He was a master ad libber, and his fans included President Franklin D. Roosevelt. His radio shows, in whatever form, are well worth a listen.
Posted by Jon K at 12:01 AM