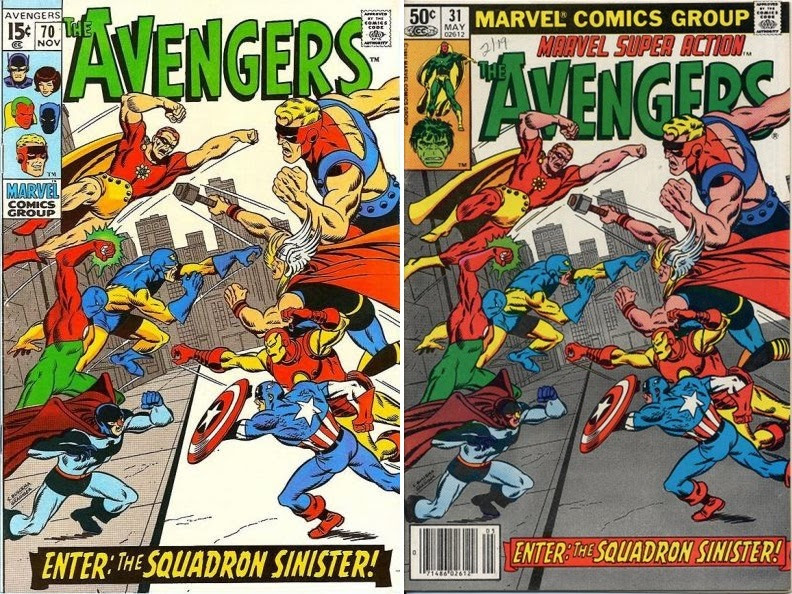 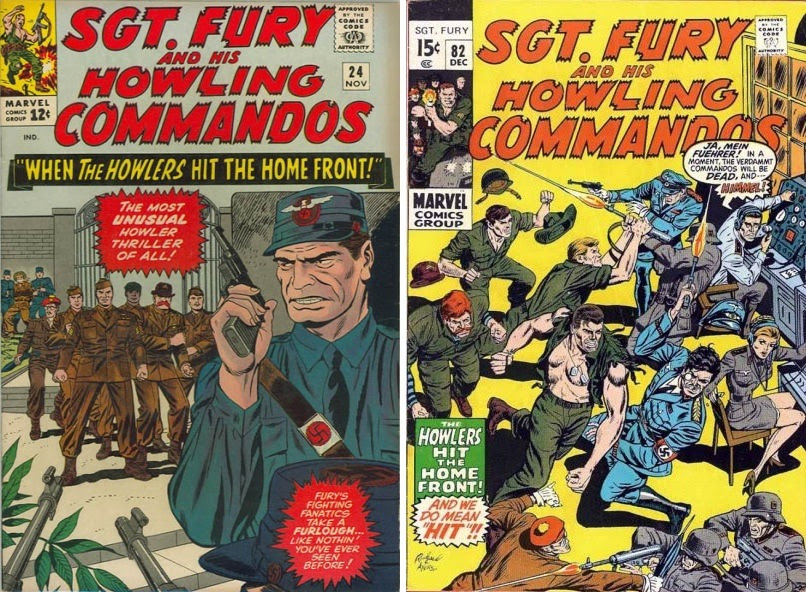 Sgt. Fury, like X-Men, is one of the few Marvel Comics that went to reprints for a time, so I end up comparing two issues of the same book for this (so far as I've been able to determine, none of the Marvel Western titles reprinted entire issues, but rather chose stories from different issues, which is why I haven't included them so far). Here's issue #24 and the reprint from #82, and obviously an entirely new cover was done... I'm not sure why this was the case, unless someone at Marvel figured that the original cover didn't have much action. 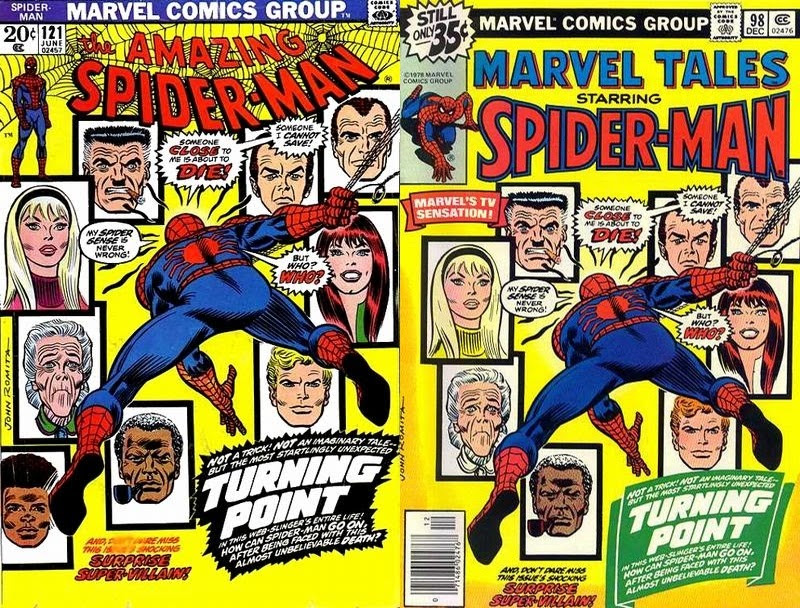 Next, it's Amazing Spider-Man #121 and the reprint from Marvel Tales #98. As you can see, the entire image was shifted down (those darn reprint logos, taking up so much extra space), as well as being reduced slightly. Interesting that Romita's signature was shifted to the side, eh? Also note that Joe Robertson's son is missing from the reprint, and the blurb has a banner around it instead of a burst. 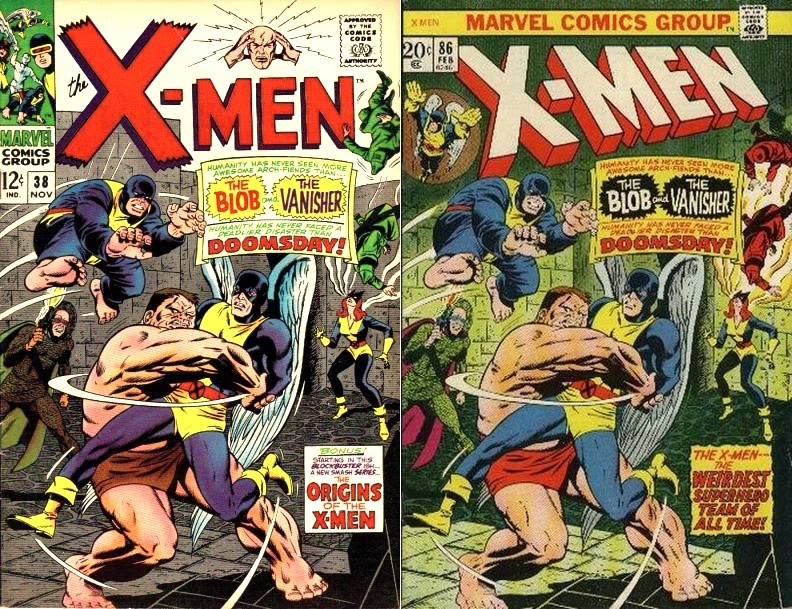 Next, we have X-Men #38 and #86... The changes here are interesting... you'll immediately note that the blurb on the lower part of the cover is different, but also note that the walls continue all the way up here... and that the second of the two goons Marvel Girl is taking on has been redrawn in a different position! 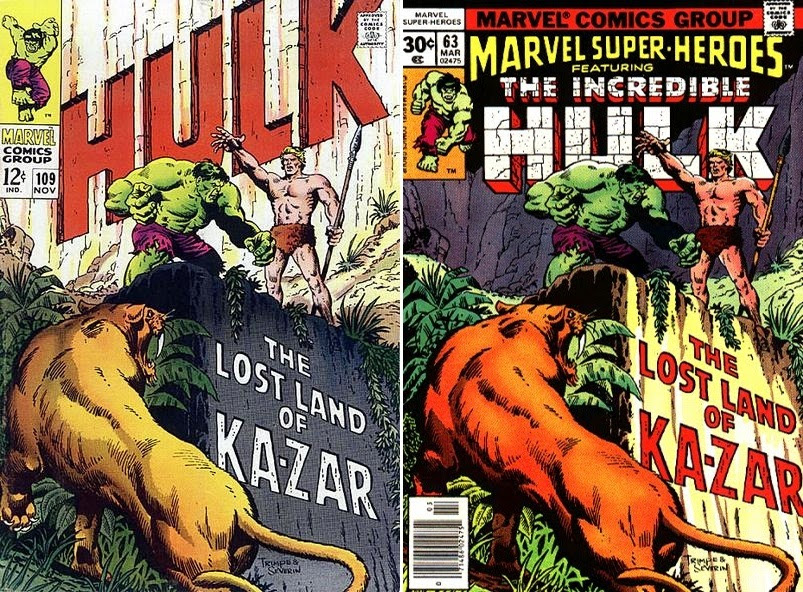 When The Incredible Hulk #109 was reprinted in Marvel Super-Heroes #63, one major change was done to the background behind Hulk and Ka-Zar... it was entirely replaced, since the original had the logo incorporated in it! I prefer the figure coloring on the reprint, believe it or not, but the background coloring is better, in my opinion, on the original. 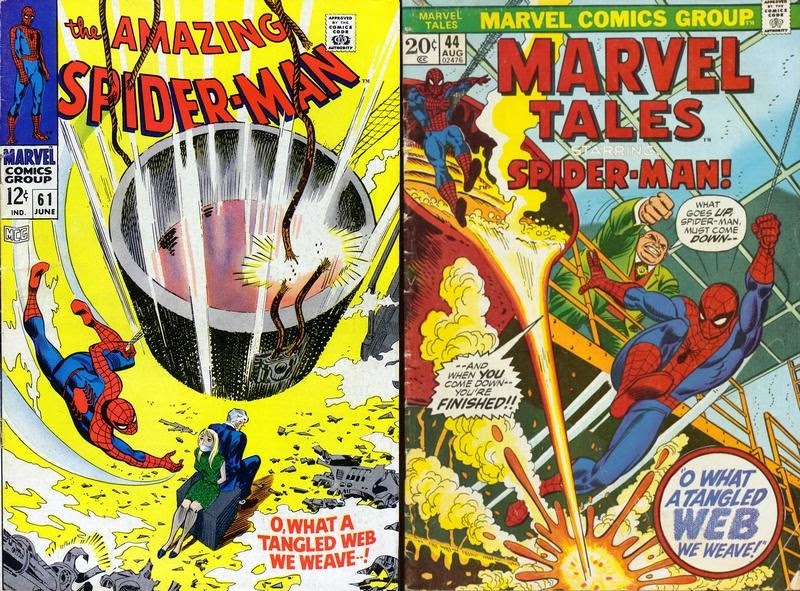 Next, and last, we have Amazing Spider-Man #61 and the reprint in Marvel Tales #44, and we're looking at an entirely new cover! At first, I thought that this might have been an alternate cover for the original used here, but given speculation at the Grand Comics Database, I'm guessing it was newly drawn for the reprint. The original is nice, but the reprint is a definite improvement... a much more dynamic composition!

Thanks to the Grand Comics Database for the cover images, as well as providing reprint information!
Posted by Jon K at 12:01 AM