Essays on Comics Characters: The Sub-Mariner! 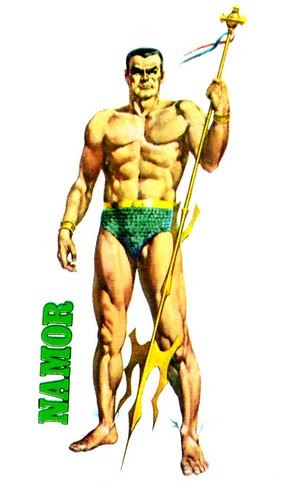 My first exposure to Prince Namor, the Sub-Mariner, had to come from one of the following: The article “Okay Axis, Here We Come” in All in Color for a Dime, the reprinted story in The Great Comic-Book Heroes, or perhaps in the pages of The Defenders or reprints of his Tales to Astonish stories in Marvel Super-Heroes. It's impossible for me to tell these days which is the case.

There's something appealing about Namor to me, that makes he like him as a character even more than Aquaman. Maybe it's just his appearance, with the arched eyebrows and pointed ears reminiscent of Mr. Spock, the tiny ankle wings that somehow enable him to fly. Maybe it's the fact that he was confident enough that his costume consisted of just a pair of swim trunks, or the nobility that he presented.

Namor has nearly always been represented as being quick-tempered, never backing from a fight. But he's just as often been presented as being a wise and just ruler of Atlantis, putting his subjects' needs above his own (and often at personal cost). And he's also presented as being guilty of pride. He's not used to being disobeyed, and expects that when he speaks, people will listen.

In his earliest adventures in the Golden Age, Namor was very much an anti-hero, almost a villain himself, making attacks on the surface world, declaring war on the human race, etc. Things got to the point where the Human Torch was called in put a stop to Namor's rampages!
Fortunately for Sub-Mariner (as well as Timely Comics), World War II came around, and the Axis was shown to be a greater evil, so Namor went from being an anti-hero to a hero, fighting the Axis, occasionally alongside other Timely characters. He went at it with gusto, being pretty damn bloodthirsty in the process! But all things come to an end eventually, and with the end of World War II, Subby disappeared from the comics, reappearing briefly in the 1950s (in some very odd stories that had him without his ankle wings and rarely even getting into the water!), then disappearing again until that fateful day when Fantastic Four #4 came out, bringing him back for good, but this time starting out as a villain, even teaming up with Doctor Doom!

But Namor did have his good side even then – when Doom betrayed Namor, Subby helped the Fantastic Four defeat his plot; and of course one can't forget that it was Namor who was responsible for Captain America coming out of suspended animation in Avengers #4! As the 60s and the Marvel Age of Comics progressed, Namor resumed being an anti-hero as far as the surface world was concerned, although to his own people he would become a hero, especially when his solo stories started in Tales to Astonish. Eventually, he'd get his own self-titled book (although that lasted only until the early 70s) and join up with the Hulk, the Silver Surfer and Dr. Strange to form the Defenders (even if his membership there wasn't always consistent). 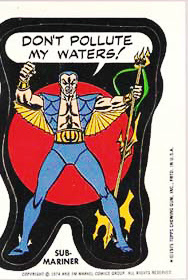 As noted, he lost his solo book, and was relegated to guest-appearances and his Defenders membership, save for a few solo stories in Marvel Premiere (or was it Marvel Presents?) as well as reprints of his solo book in the second series of Tales to Astonish once the Hulk reprints crowded him out of the Marvel Super-Heroes reprints (although that didn't last too long, either).

Namor's last touch with greatness was due to John Byrne, who used him in Fantastic Four and Alpha Flight, and eventually in Namor, the Sub-Mariner, his first solo book in way too long. Byrne had a new take on Namor, and even explained Namor's mood swings, but then Byrne left the book and things suddenly turned grim and gritty, and that's when I stopped buying that book.

Namor hasn't been used well, to the best of my knowledge, since then. I don't know what the current state of Atlantis is supposed to be in the Marvel books, and I'm not sure how much I care, since it doesn't feel like the characters are acting the way I expect them to.

So here's my take on Namor: He's first and foremost a nobleman, and very close secondly, a warrior. He's much like the kings of old England, who would ride with their armies into battle; yet Namor would also take on enemies single-handedly as need be. Yes, he's pretty damn arrogant, and part of that may be because he is the only one of his kind (or at least the first... I'm not sure what the deal with Namora was, as she was the only other Atlantean with the same characteristics... and last I heard, Namorita was revealed to be a clone of Namora, and then got herself mutated into a bizarre form), and so it may be that he feels on some level he has to constantly prove himself. Maybe Atlantean royals have a long tradition of arrogance, so it's kind of expected. Namor is fiercely loyal to his people, as well as to his friends (which aren't always Atlanteans). He prefers to be asked for help instead of summoned (such as when Dr. Strange casts a spell to transport him without his permission). In his youth, Namor had a sense of humor, but that seems to be long gone now (he needs someone to bring it back to him again, but let's face it, he's been pretty grim since the death of Lady Dorma, and then again when he lost his second wife, Marrina). He doesn't like being taken for granted, and expects when he travels to the surface world to be treated as a visiting diplomat (which, let's face it, he is). 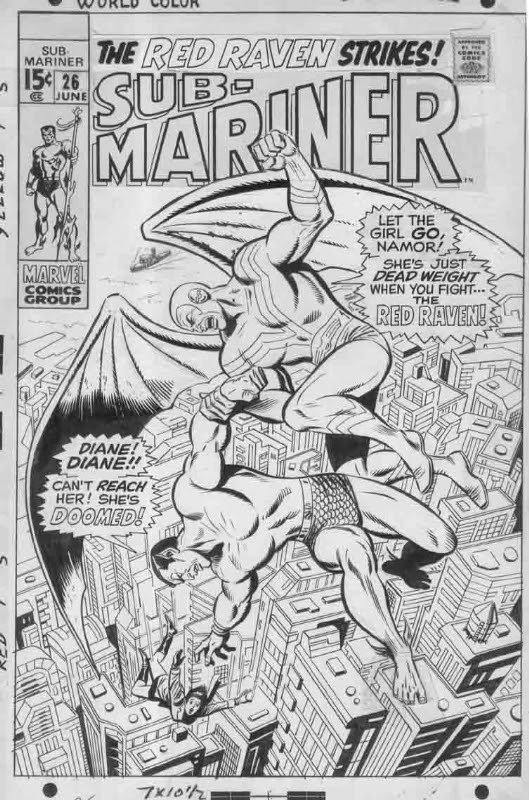 I'd like to see the establishment of an Atlantean Consulate in New York City, with Atlantis recognized by the UN as a member. Reed Richards could come up with something to help the Atlanteans in the Consultate deal with breathing on the surface without needing something too bulky (the suit he designed for Triton should do the trick). This would give Namor roots on the land and sea, as befits his heritage. Perhaps he could even discover where his father's home was on the surface, and pay a visit there (who knows, he could have distant cousins on the surface that he's never met before).

Namor needs to find someone trustworthy to act as regent in his stead when he's away from Atlantis, and take steps to keep Atlantis safe from its enemies. Trade could be established between Atlantis and the surface world (they must have technology that could be useful, after all, they had to come up with a way to process metals underwater, as well as how to create cloth that can handle constant underwater wear). I'd like to see some logical thinking going on with Atlantean culture, too – do they cook the food they eat, or do they eat it raw? No more scenes of Atlanteans drinking anything out of goblet, either – any liquids they drink would have to be in a tube or bulb and squeezed out when put to the mouth! Perhaps Atlantean beverages are more viscous than our own, almost like Jell-O.

I have no idea what's going on with Namor's old foes, such as Attuma, Tiger Shark, and the others... are any of them alive? Has someone else taken charge of Attuma's barbarians? There's a lot of ocean on our planet, and most of it is unexplored, so there's ample opportunities for adventures to be had, just in exploration alone. Does Atlantis have colonies in other waters? Are there other Atlantean off-shoots like the barbarians to be discovered?

I also think that Namor needs to find romance in his life. He's been burned twice before, so he's probably not really open to a relationship, but I think it would benefit him to have someone special in his life. Perhaps if there are lost tribes of Atlantis out there, he'd be able to find someone who could be his equal.

I don't see Namor becoming a member of a superhero team, because he shouldn't have the time for it, but he should certainly be established as an ally by the Fantastic Four and the Avengers. They should feel free to call on him if needed, just as he should call on them if he needs their help (given his arrogance, he'd probably hate to do so until the situation was most dire, but perhaps if he encountered a problem he couldn't solve himself and needed help when it reached crisis proportions, he could come to realize that allies are a very good thing to have).

I invite your comments and thoughts.
Posted by Jon K at 12:01 AM