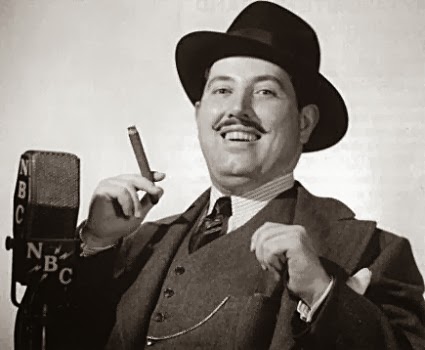 As much as I love Fibber McGee and Molly, sometimes I wonder if I love The Great Gildersleeve even more.

As I noted last time around, The Great Gildersleeve was a spin-off from that show, with Fibber McGee's next-door neighbor, Throckmorton P. Gildersleeve, leaving the town of Wistful Vista and moving to Summerfield. There, he found himself as the guardian of his niece, Marjorie Forester, and his nephew, Leroy, who had been orphaned. Gildersleeve (or "Gildy," as he was often nicknamed) also administrated the estate for the children.

Harold Peary continued to play Gildersleeve, although his character softened a little bit in the new show. While he still owned the Gildersleeve Girdle Company at the beginning of the show, he obviously could not continue running it while living in Summerfield. Later, he served as the water commissioner for Summerfield, while continuing to maintain the estate (a lot of the estate was tied up in real estate).

Marjorie was originally played by Lurene Tuttle, and then later by Louise Erickson and Mary Le Robb. She was a teenager when the series began, and matured into a young woman as the series continued. During the ninth season, Marjorie met and married Walter "Bronco" Thompson, star football player at the local college. They lived with Gildersleeve for a few years before moving to a house next door. Walter was played by Richard Crenna. It was established that Marjorie was a very attractive young woman, and some of the humor in the show derived from Marjorie's girlfriends interacting with Gildersleeve, and they all seemed as beautiful as Marjorie. She could be flighty at times, but you could tell that she really loved and cared for her uncle and brother.

Leroy was played by Walter Tetley, and he was portrayed as about age 10-11 during most of the show's run before allowing to grow up, Leroy could be a bit of a smart mouth, catching Gildersleeve when he contradicted himself. While Marjorie had Gildy wrapped around her little finger, he tended to be firmer with Leroy. Leroy's best friend for most of the show was next-door neighbor "Piggy" Banks.

Another member of the household was cook and housekeeper Birdie Lee Coggins (Lillian Randolph). While she was portrayed as less than intelligent in the first season, later writers developed her character more and more intelligent. Sometimes, she was the only level-headed member of the household! One recurring gag with her character was her membership in the Daughters of Cleopatra, a club for black women.

Gildersleeve's nemesis and closest friend (depending on what was happening) was Judge Horace Hooker (Earle Ross). Judge Hooker's role was antagonistic in the beginning of the series... he really hated Gildersleeve at the beginning, assigning the guardianship and estate executor positions to him as a punishment for how Gildersleeve had treated him earlier. He'd often show up at the Gildersleeve home in order to check up on how Gildersleeve was managing the affairs of the children. Around 1943, the two started becoming friends.  Hooker's sister was an on-again/off-again romantic interest for Gildersleeve.

The show followed most of the standard sitcom tropes of the time. One episode had the children wanting to buy Gildersleeve a new recliner for the living room, while Gildersleeve was buying the same chair for himself, in a different color, and the confusion as the same two chairs kept arriving and being sent back to the same store. Another episode dealt with a fundraising carnival where the scheduled mind reading act didn't show, and Gildersleeve disguised himself to take the swami's place, unaware that the swami was wanted by the police.

In 1950, the show moved from original network NBC to CBS, but sponsor Kraft Foods wouldn't sanction the move. So, while the show remained on NBC, Peary was contracted to CBS, where he tried to start a new show, The Harold Peary Show, very similar to The Great Gildersleeve, but it only lasted one season. His replacement was Willard Waterman, who continued when the show went to television in 1955 for a 39 episode run.

Prior to all that, Peary played Gildersleeve in the movies Look Who's Laughing (with the Jordans as Fibber McGee and Molly, as well as Edgar Bergen) and Here We Go Again. In 1942, a separate series of Gildersleeve movies, starting with The Great Gildersleeve, and continuing with Gildersleeve on Broadway, Gildersleeve's Bad Day, and Gildersleeve's Ghost. Peary also recorded three albums as Gildersleeve for Capitol Records, reading stories for children. Post-Gildersleeve, Peary continued performing in films and TV into the 1970s, especially as a voice actor for Rankin-Bass and Hanna-Barbera.

It's really difficult to give a true sense of the show like this, without hearing the character voices and listening to the interactions. You can learn more about the program and listen to episodes of it at Great Gildersleeve.com.
Posted by Jon K at 12:01 AM