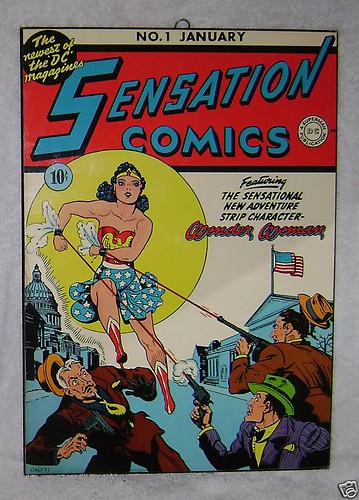 First of all, one confession: I've never really been a big Wonder Woman fan. Oh, I've read her stories here and there over the years, covering pretty much every era of her publishing history, but I think the fact that she's been completely reinvented so many times has made it difficult for me to get a good handle on what she is about.

For the first decade or so of her history in comics, Wonder Woman had some pretty bizarre exploits, although there was a strong mythological tie with many of her foes, which I think works in her favor (Thor is about the only regularly-appearing character with a regular pantheon of mythological figures showing up all the time). As many have noted before me, her stories also had a pretty healthy (or is that unhealthy?) focus on bondage and discipline, or as Diana would often call it, "Loving submission," or something like that. On the surface, the idea was that men (or evil-doers, but often they were both) would be much better off if they'd just let the superior woman take over their lives and provide the guidance and vision that they need. Not too far under the surface, it was about Diana (and often Etta Candy and her coterie of friends) getting tied up or otherwise bound by Wonder Woman's enemies. 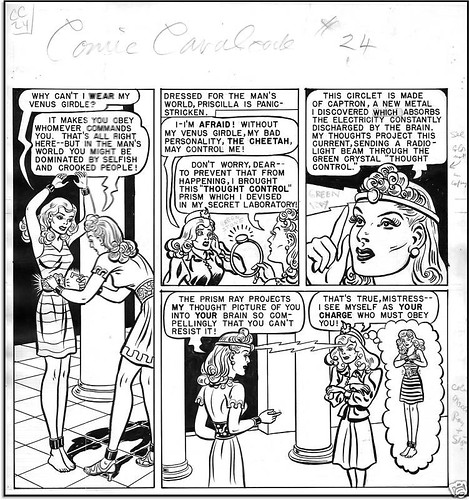 It's difficult for me to look at those old stories and think of the fetishism on display as being much of a turn-on to the male (or even female) readers of the era, mostly due to the rather eccentric artistic style of the artist (whose name escapes me, I think Peters was his last name? I could look it up, but I'm trying to get this done so it'll run on time, unlike the Cool Stuff post that ran a few days late). Other comic artists had their own styles, but his was downright weird! Some of the characters almost looked more like they belonged in the comic strips rather than in the comic books (strips such as Thimble Theater, Little Orphan Annie, Dick Tracy, as opposed to Flash Gordon and the like). You could tell which women were evil, because they looked evil. Even if they were supposed to be beautiful, there was an ugliness to the way they were drawn. 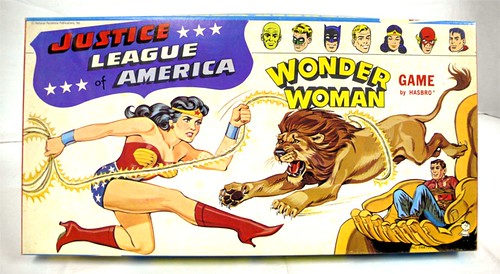 By the early 1960s, this style, fortunately, went away, and Wonder Woman's adventures got even more bizarre. About the only cast member to survive the change was Steve Trevor, Diana's boy friend (and impetus for her transformation from Amazon Princess to superheroine), along with the Amazons. We started getting some plot ideas borrowed from Weisinger's Superman comics, with adventures of Wonder Woman as a teenager as well as a baby (reflecting the Superboy and Superbaby stories), and eventually got to the "Impossible Stories" wherein Wonder Woman teamed up with her younger selves (this, in turn, caused the creation of a separate Wonder Girl by accident when the Teen Titans were created, as it wasn't clear to that writer that Wonder Girl was supposed to be the teenage Wonder Woman). Even Wonder Woman's foes got bizarre (wasn't this the era of Egg Fu?). A lot of the artwork was done by Ross Andru during this time, I forget who wrote the book. Wonder Woman got away from her mythological origins for the most part, as well as her old foes. 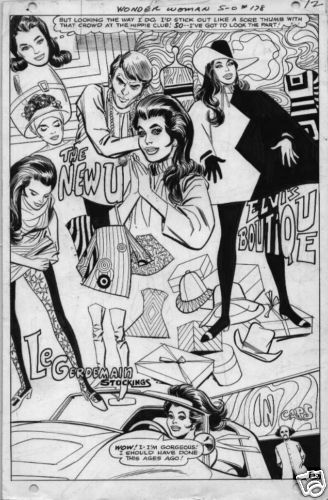 The next era of Wonder Woman was inspired by Diana Rigg as Emma Peel in TV's Avengers, with Diana losing her powers, teaming up with I Ching to learn martial arts, and generally have some even more bizarre exploits (it should be noted, however, that a return to some of the bondage stuff appeared during this time). The entirety of Amazon Island moved to another dimension, and even Steve Trevor died! While this era is often joked about by comics fans, it should be noted that not too long ago, the current Wonder Woman title went back to this basic concept! 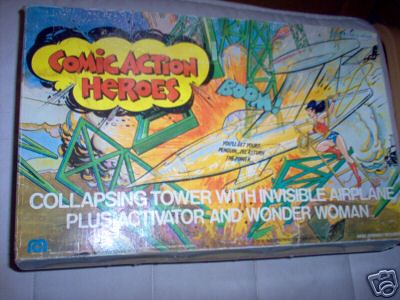 When ABC-TV decided to create a Wonder Woman series for TV, this probably did a lot to restore a lot of the trappings to Wonder Woman (actually, I think this started a little bit earlier, when Wonder Woman got her powers back, spent several issues narrated by various members of the Justice League as she felt she had to prove herself in order to rejoin the JLA). The TV series' biggest influence on Wonder Woman was to have her solo stories revert to the World War II setting (which the first few seasons of the show took place in). This didn't bring back all the odd villains of the era, it should be noted, although some new ones were introduced (which went on to appear in later comics, mostly All-Star Squadron). Obviously, these WWII stories were considered to be the Earth-2 Wonder Woman's adventures, so the Earth-1 Wonder Woman was still free to appear in Justice League of America.

When the show switched to CBS and moved to the modern era, Wonder Woman's adventures moved to the modern era in comics, too, with a story that crossed over the Wonder Women of both Earths before refocusing back on the Earth-1 Diana. Here, I believe things started meandering even further along, with Diana Prince getting a new job at the UN, Steve Trevor being back from the dead (although I think this wasn't the same Steve Trevor, although for all intents and purposes it was the same guy). Things went on pretty much like this for years. 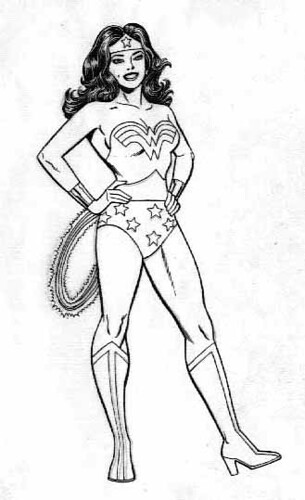 Enter Roy Thomas as writer and Gene Colon as artist. A new era for Wonder Woman started, along with a slightly modified costume with a stylized WW replacing the familiar eagle on her breastplate. More of the mythological aspects came back, although a bit modified from the original stories.

It wouldn't last. Crisis on Infinite Earths, as cool a story as it was, seemed to inspire DC Comics as a whole to relaunch its major characters, and Wonder Woman was one of them. Her original title was cancelled (followed up by mini-series The Legend of Wonder Woman, which featured sort of a throw-back to the WWII-era stories), and then, finally, a new title was launched with a new #1.

George Perez, having had a very successful run with Marv Wolfman on The New Teen Titans, had a new vision for Diana. This new vision made the Greek gods a more vital part of the storyline, and eliminated the Diana Prince identity entirely. Steve Trevor was re-envisioned as an older man, too old to be Diana's romantic interest. I liked this series, but I think I dropped it even before Perez left the book. 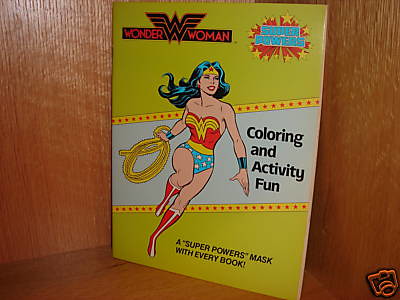 Since then, it seems an effort has been made to make Wonder Woman the equal of Superman and Batman in DC's trinity of heroes. Her powers have been amped up so that she has the actual ability to fly (as opposed to the original "gliding on the wind currents" that probably started in the 1960s), and her strength and speed are pretty much up there with Superman's. More of the trappings from the older comics have returned, such as the invisible jet. I've not read any of her solo stories since I stopped buying it during the Perez era, so my only exposure has been in other books.

Her biggest character moment seemed to be when she broke Maxwell Lord's neck as a result of the events in Identity Crisis. I don't know if she ever went through guilt at her actions at all. 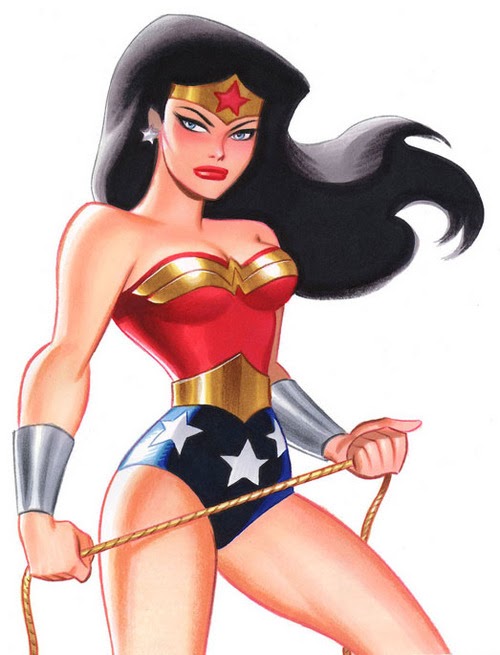 So... how do I think Wonder Woman should be portrayed? I think the most recent versions of Wonder Woman I've most enjoyed were the version from the animated Justice League/Justice League Unlimited. Diana was portrayed as a bit younger in this series, very much the warrior, yet curious about how women in Man's World do things (there was one episode in particular, where she accompanies this bratty jet-set princess in her exploits, that really shows this). She was romantically interested in Batman, although that never really went very far. Her power level was portrayed well, as well as her being torn between being Wonder Woman and Princess Diana of Themiscyria (I don't know if I spelled that right or not).


Another version I liked was how she was portrayed in The New Frontier. If you've never read it or seen the animated movie based on it, imagine Xena with super powers, and you'd pretty much have it. This Wonder Woman has a zest for life that reminds one of Marvel's Hercules (much as the animated version reminds one a bit of Thor). 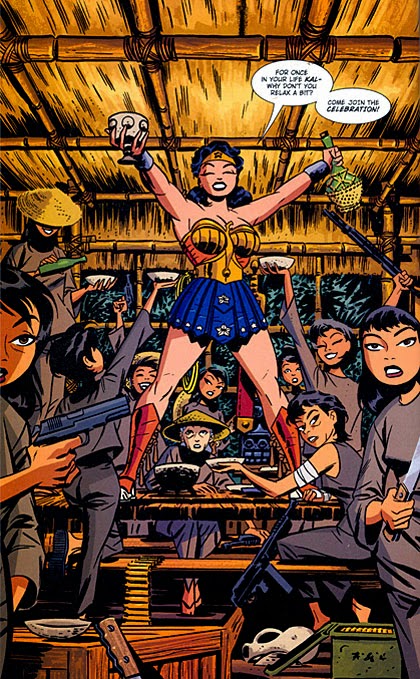 I think Diana can be portrayed with a bit of each of these characterizations. She knows she's a role model for women in general, but she's also a warrior, with a warrior's appetite. She's not demur or soft-spoken, but tends to be rather blunt or to the point. I don't believe she would kill a human being, no matter what the provocation. Monsters are one thing (after all, monsters exist for heroes to slay in Greek mythology), people are another. The Diana I know would not have snapped Maxwell Lord's neck, but instead found another way to prevent him from doing what he did again. Perhaps she'd get Green Lantern's help to have Lord extradited to Oa and be imprisoned in a Sciencell.

She would be very faithful to her friends, primarily among them her fellow Justice Leaguers. I'm perfectly okay with her not using the Diana Prince identity, unless she needed it to operate "undercover," without anyone knowing she was Wonder Woman. She wouldn't need a way to escape being Wonder Woman, because that's who she really is.

I like the idea of the mythological aspects being a regular element in her solo stories, but not a dominating one. She would mostly seek out opponents who operate by forcing their will on others or dominating them. I can see her setting up shelters for battered women, and providing self-defense training for them as part of helping them get back on their feet and seeking a better life for themselves. She might even start a nationwide campaign to reach out to the young girls of America, telling them that they have no limits to what they can do, and encouraging them in areas of physical fitness.

Those are my thoughts on Wonder Woman... what are yours?
Posted by Jon K at 12:01 AM