Time for another gallery of photos of monster or horror-related collectibles! Unless otherwise noted, the photos you'll see here were saved from various eBay auctions, and I don't have any of these items available for sale. 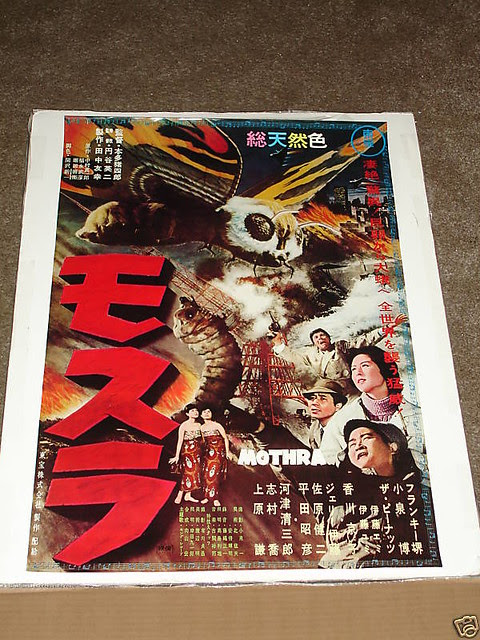 First up, above is the Japanese poster for Mothra, with a US pressbook below, followed by a still! 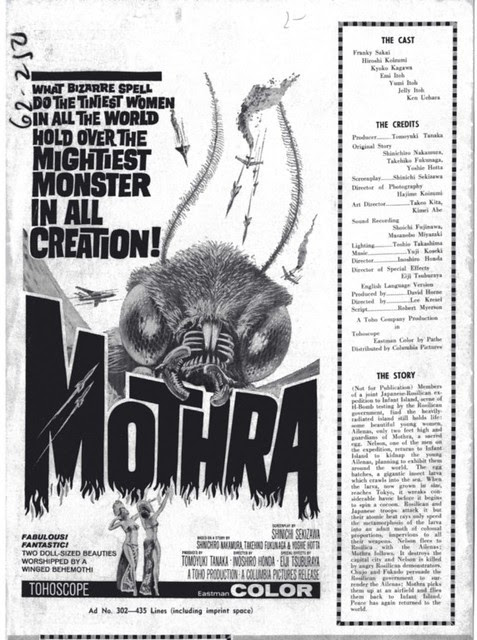 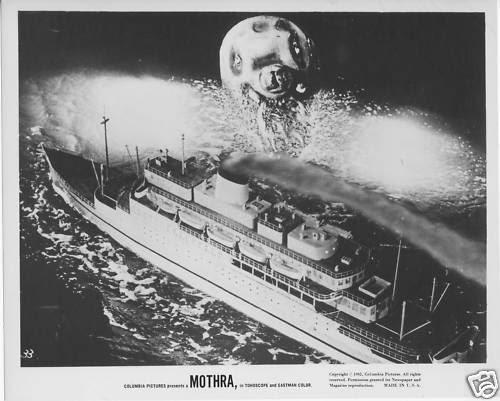 Book and Record: Battle for the Planet of the Apes!

Power Records chose to skip Conquest of the Planet of the Apes in their book and record sets, perhaps wisely. 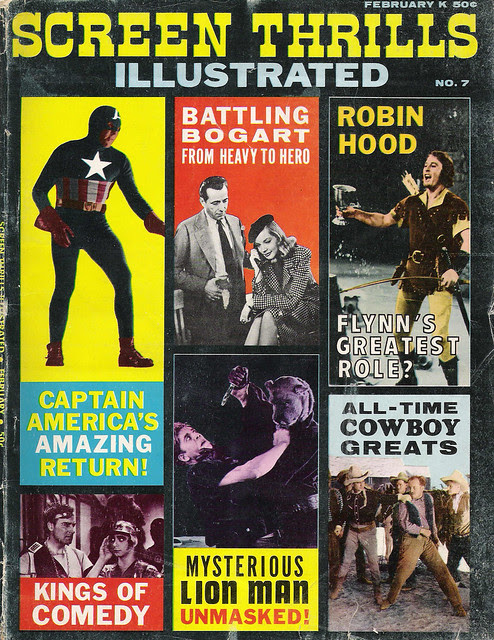 Time for another round of "Covers Redux," in which I compare two Marvel Comics covers, the original and the reprint, looking for differences! First up, it's Amazing Spider-Man #131 and the reprint in Marvel Tales #10. There's been some changes made here, although I'm having a difficult time figuring out how it was done. If you look at the Spider-Man figure on both covers, he's clearly closer to the edge of the page on the original than in the reprint, yet when you look at Aunt May's bridal veil, it seems to be the same distance on both! Yet, I can't spot where there's any real changes made that would accommodate this! It's almost as though it was rotated slightly, which wouldn't make any sense. Of course, the blurb has been altered between the two covers, too. 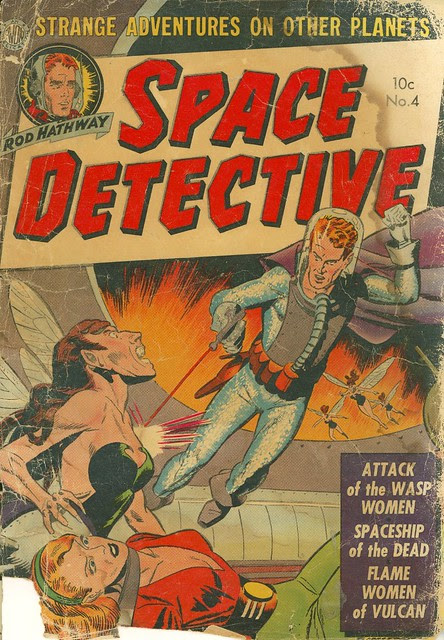 Since this issue isn't complete (only the first two stories are present) I'm including a bonus at the end! 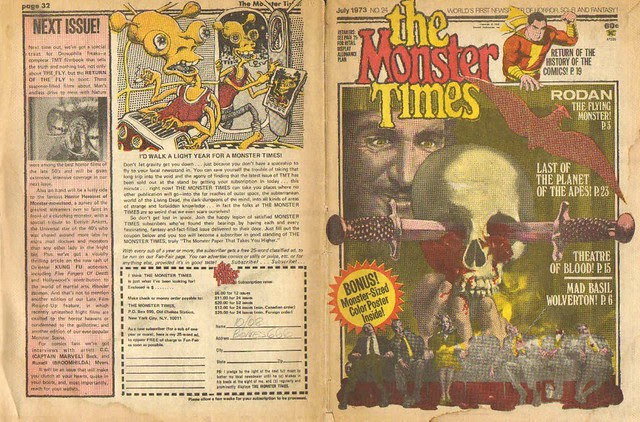 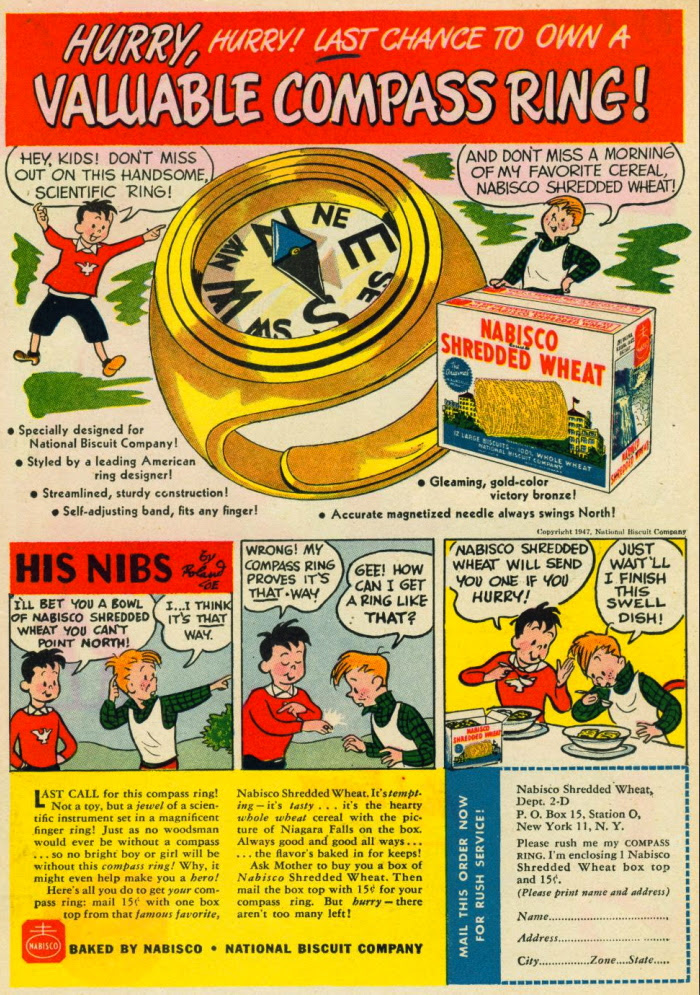 And it's more miscellaneous stuff, although we might touch back on an item or two from last time! Anyway, here's an ad for Nabisco Shredded Wheat with their latest gimmick to get kids to want to eat those huge, dry biscuits! Eventually they'd come up with the spoon size version, and then frosted, and that would get the kids eating even without a prize! 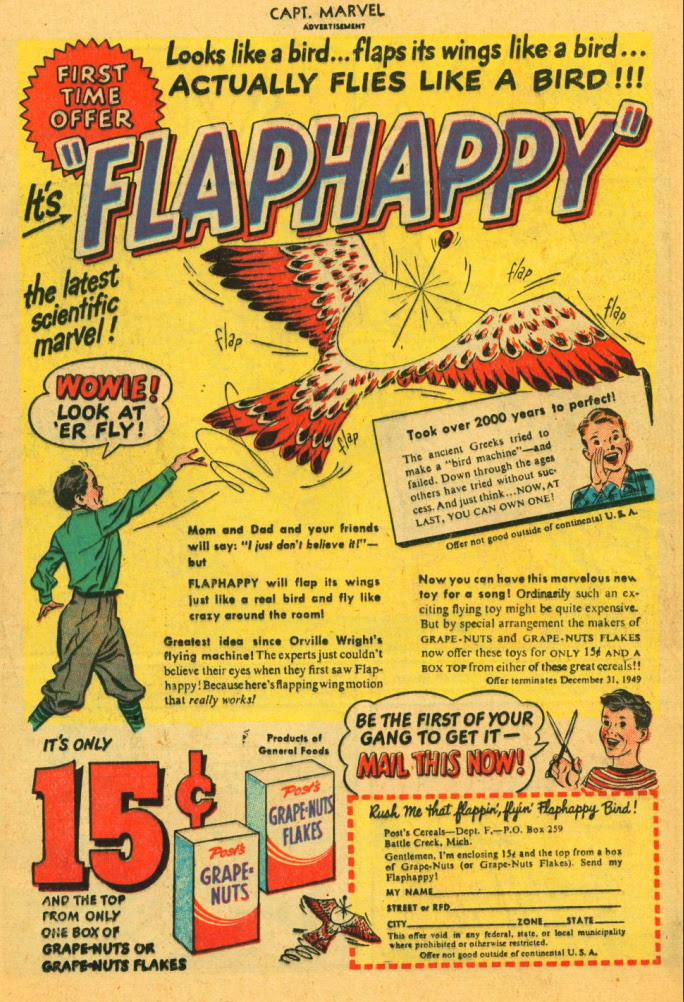 I don't see how even this offer made Grape Nuts appealing to kids.. even as an adult, I can't stand 'em! 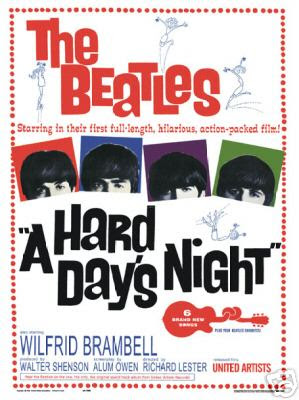 As promised, this time around, I'm taking a look at the Beatles first movie, A Hard Day's Night, which of course is one of my favorite movies! This movie was a bit of a risk by United Artists in some ways – only Elvis Presley had been making movies so far that featured a musical performer of the day (yes, there were movies that had other rockers, such as Little Richard, performing in them, but they were almost more guest spots, just to play their songs, and that was about the extent of their role). One would have to go back to Bing Crosby's movies (many of them co-starring Bob Hope) or Frank Sinatra to find a film that featured a musical performer starring in them – and Bing and Frank had been demonstrating on radio that they could act!

The story goes that United Artists mainly signed the Beatles to this film because it would give them a soundtrack album, which they figured would sell well (as it did), but at the same time, they filmed it in black and white instead of color to save money (pretty cheap of them, eh?). Of course, the follow-up film, Help!, was filmed in color (and had a lot more location shooting).

I didn't get to see A Hard Day's Night until sometime in the late 1980s or early 1990s, either on a videotape release rented from the local video store or when it was shown on VH1 (more likely the former, as I'd rent tapes pretty much every weekend back then). I'd had one opportunity previously to see the movie when it was shown in a limited engagement in Seattle, either in the late 1970s or early 1980s (more likely the latter this time), but it didn't happen... at the time, my family had relatives visiting from out of town, and they planned to go up to Seattle for the Underground Seattle tour. I'd asked if they could drop me at the theater so I could watch the movie while they did the tour, but my parents said if I wasn't going on the tour with them, I should stay home. So I stayed home (I never went on that tour until after I'd met my second wife, Jessi).

I'd heard the songs before seeing the movie, obviously, as I'd already picked up the CD release of the soundtrack (and probably the cassette version before that, I never owned the vinyl version). Of course, I had read about the movie in pretty much every Beatles biography I'd ever read (the only type of non-fiction books I'd read that outnumbered the history of comics books were probably Beatles books). Back in the 1970s, I recall that a cousin of mine, Lymon, had the paperback book based on the movie, and I read it during a visit one summer (this was the same cousin who introduced me to The Monster Times).

But like I said, until the videotape release, I never got to see it. I don't know why it didn't get the television airings that Help! managed, except that perhaps it was in black and white.
Click for more ->
Posted by Jon K at 12:01 AM No comments:

Email ThisBlogThis!Share to TwitterShare to FacebookShare to Pinterest
Labels: Beatles, My Favorite Movies 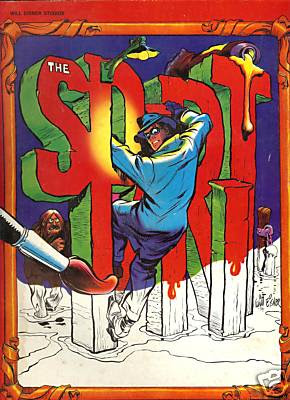 First up on this installment of "Cool Stuff" is this Spirit Coloring Book, which I recall was comprised of full-page splashes from Will Eisner's classic strip! More photos of cool items I spotted on eBay coming up after the jump!

It's time once again for a parade of Kirby Kovers! 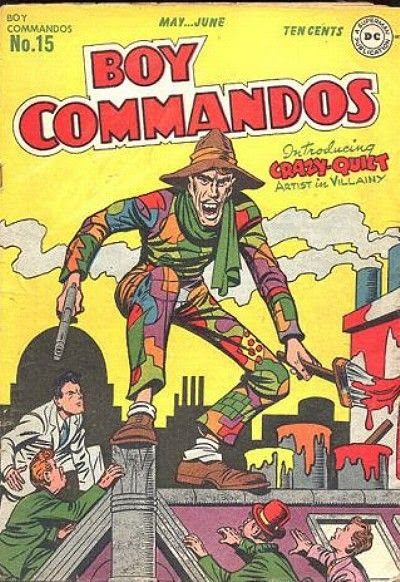 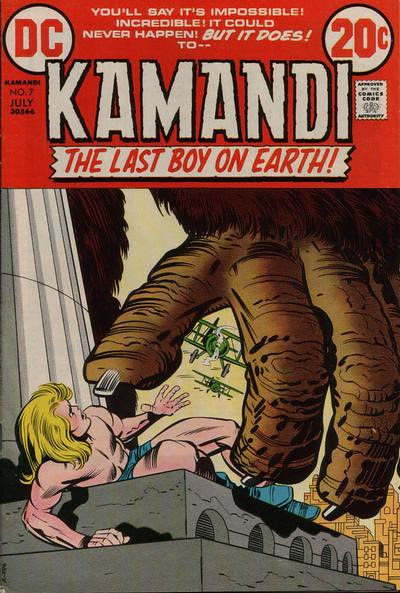 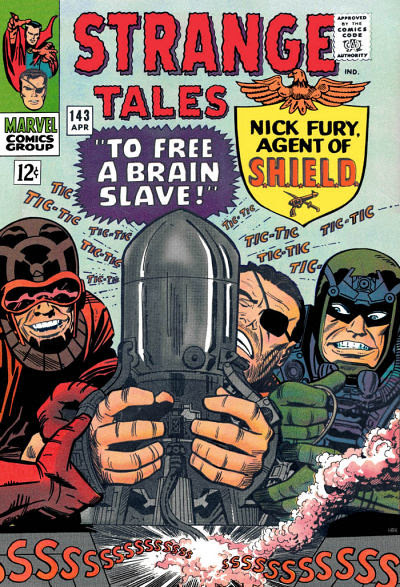 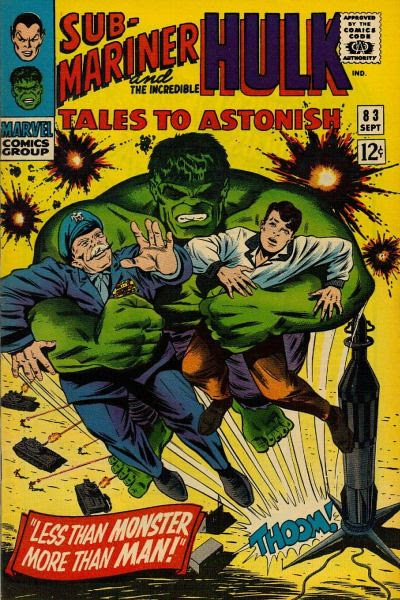 Ape of the Geek: B'Tonga! 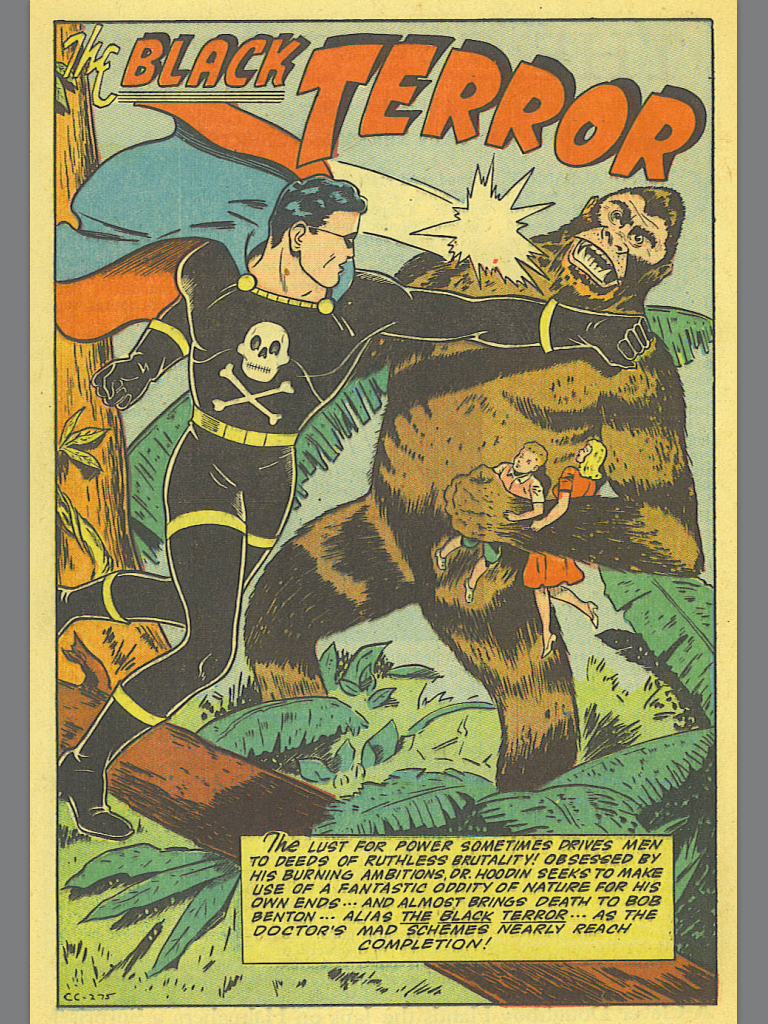 Other Appearances: None (see Biography)

Biography: One day, in Bob (Black Terror) Benton's drug store in New York City, the newspaper reports on the capture of a 40-foot tall gorilla by an expedition in Africa. A deep pit trap was used, and it's been imprisoned in a huge metal cage. The ape will be on exhibition in the city park the next day, and has been named B'Tonga. Bob's assistant, Tim (also his partner, The Terror Kid as he's sometimes called, although he's usually just called Tim by his senior partner, even in costume) and Jean, a pretty blonde woman who's a newspaper reporter (and sort of girlfriend to Benton, although she always compares him negatively to his alter ego) plan to join Bob to see the gorilla on display. Elsewhere, in the lab of Dr. Oscar Hoodin, he also sees the headlines. Hoodin is the world's foremost authority on chemical hypnotism, and he believes he can gain control over B'Tonga. He goes to the park that night to put the ape in his control, but when he sees a guard, he approaches the guard and chats with him. When he leaves, he “accidentally” drops a ring, which the guard picks up and tries to return, but Hoodin says is not his. The diamond in the ring is sharp-pointed, and Hoodin figures the guard will be injected with his hypnotic chemicals that way. It happens, and the guard goes into a trance. Hoodin gets the guard to open the cage, and after giving B'Tonga the same chemicals (presumably, although it's not shown), the ape follows him away to Hoodin's hideout in the Kentucky mountains.

The next day, when Bob and his friends arrive, they find the cage empty. Tim finds the ring, having been dropped, and cuts himself on it, falling into a trance. Bob and Jean take Tim back to Bob's drug store, where he analyzes the chemicals on the ring. He tells Jean he'll contact the police, but Jean gets angry and leaves. Bob and Tim change into their costumes and are on the trail. Meanwhile, Hoodin takes B'Tonga to a nearby city, using the giant gorilla to rob the city bank and trust company. The Black Terror learns about this, but instead of going to Kentucky to search, they go to a psychiatrist refugee from Germany Bob knows, who tells them about Hoodin's father, whose work Hoodin is carrying on. The Terror contacts the police, who give him Hoodin's address.

Meanwhile, Jean's found the guard and convinced him to go to a doctor to help him recall what happened under hypnosis. Jean boards a plane to Kentucky, but the plane is struck by lightning as it flies over Fort Knox, and has to make an emergency landing. At the same time, Hoodin has B'Tonga attack Fort Knox! Just then, the Black Terror and Tim are flying overhead in a specially assigned army plane (the Terror is on good terms with the authorities) and they spot the gorilla as well as Jean, who's come upon the situation. The Terror Twins leap from the plane and tackle B'Tonga, but the gorilla's too strong, and he takes the two in his paws.

Later, at Hoodin's home in the mountains, with the Terror Twins, Jean, and a guard tied up, Hoodin injects them with his chemical, but the Black Terror is able to overcome the effects. The Terror finds bananas that have been treated for the gorilla, and takes them to B'Tonga's cage, where he gives them to the gorilla to get him under his control! He frees the ape, but Hoodin arrives, and tells the Terror to order B'Tonga to obey Hoodin, or his friends will be killed. The Terror agrees, but then he attacks Hoodin! Hoodin shoots but misses, and then he orders B'Tonga to kill the Terror. The Terror rips a tree out of the ground to use as a weapon, and uses it to trip the gorilla. Hoodin takes a bottle of acid, intending to throw it on the Terror, but misses and hits B'Tonga. Blinded and burned, B'Tonga runs amok, falling over a cliff to his death. Hoodin is captured, and everyone returns back to New York safely... except B'Tonga.

Powers: B'Tonga is possessed of tremendous strength, and apparently also great intelligence, since he's able to understand Hoodin's spoken commands (this can't be explained by the chemical).

Miscellaneous: Obviously a riff on King Kong, including the gorilla being captured, put on exhibition, and eventually falling to his death, although we're not given any opportunity to feel too sorry for him. I don't know if any later story had other gorillas like B'Tonga found. 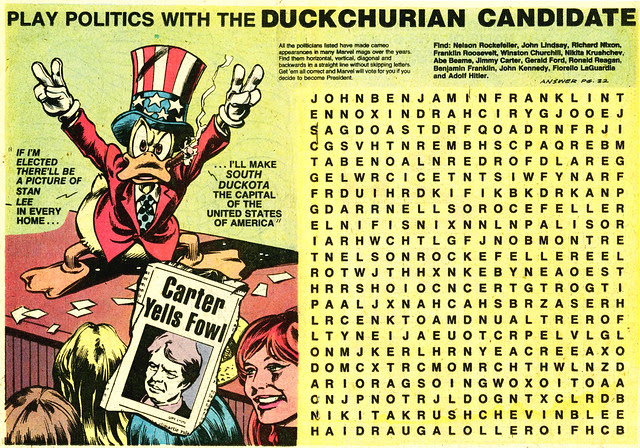 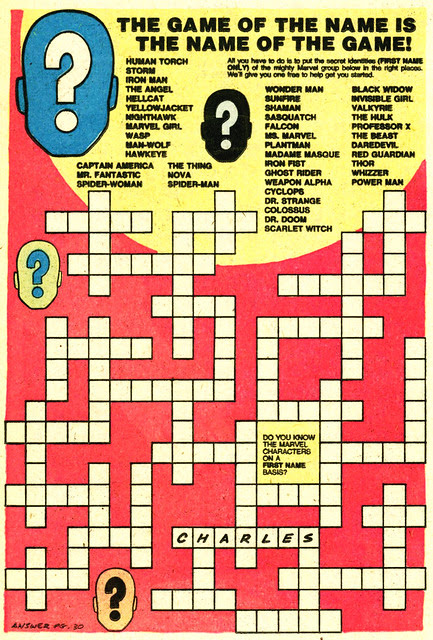 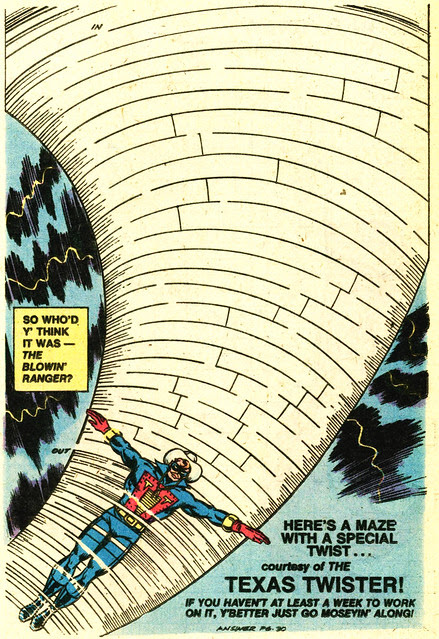 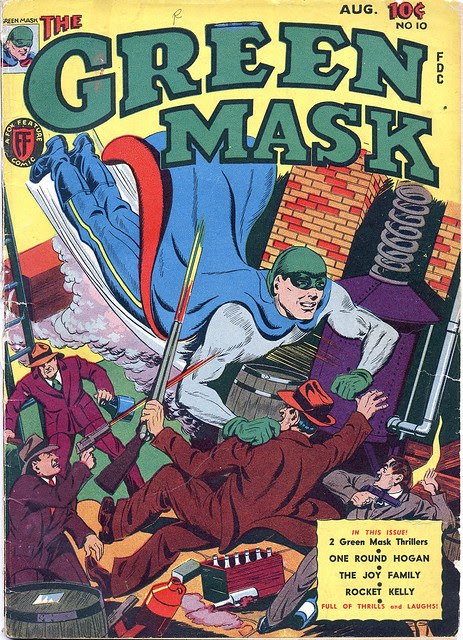