Just a head's up... starting next month, Monster Stuff and Monster Magazines will be switching spots in the schedule, as I have a bigger backlog of monster mags than I do photos of monster collectibles! And now, on with this installment (as is usual, unless specifically noted, I don't own any of these, I only have the photos to share)!

First up, this assortment of lobby cards for The Mummy's Curse... as I'm sure I've noted somewhere before, the Mummy is probably my least favorite of Universal's monsters, but that certainly doesn't mean I won't save photos to share here! This installment will probably be all-Mummy!

Book and Record Set: The Empire Strikes Back!

Time for another gallery of Marvel comics covers paired with the reprint book, so I can compare and contrast them! First up, it's Avengers #46 and the reprint in Avengers #38. Now, as you can see, a number of changes were made here. Let's start with the blurbs... the bottom one was moved to accommodate the UPC code, and the Whirlwind one was reversed. The whole image was shifted down, and the floating heads were reduced and placed on a redrawn rock. In fact, all the rock on the bottom was redone. You'll see that the darker shading on the largest ant is even darker on the reprint, making me wonder if it had been redrawn some... especially since Goliath's right leg has been altered some. You'll also notice that the Wasp has been at least partly redrawn, so we see more of her torso. I think the other ant was redrawn as well, as the one leg is positioned differently.

Too Cute For Words!

Krypto and newest kitty Rocky, taken the other day: 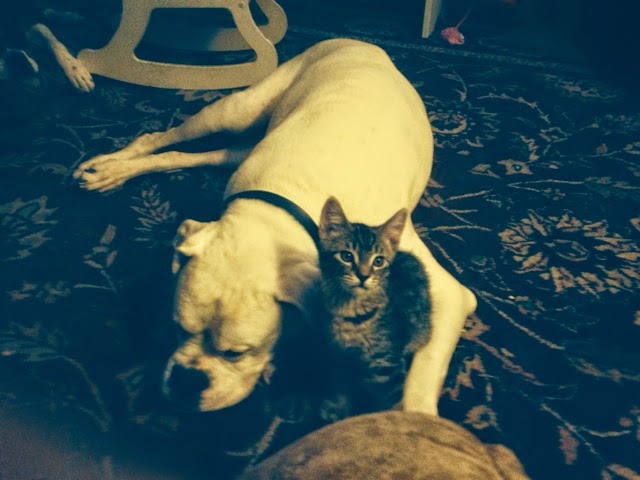 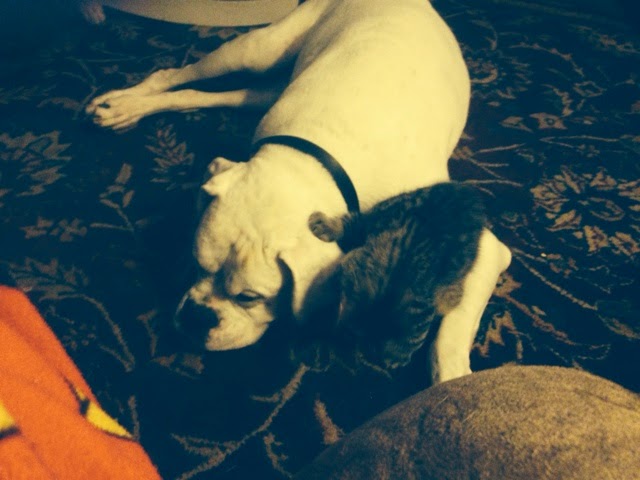 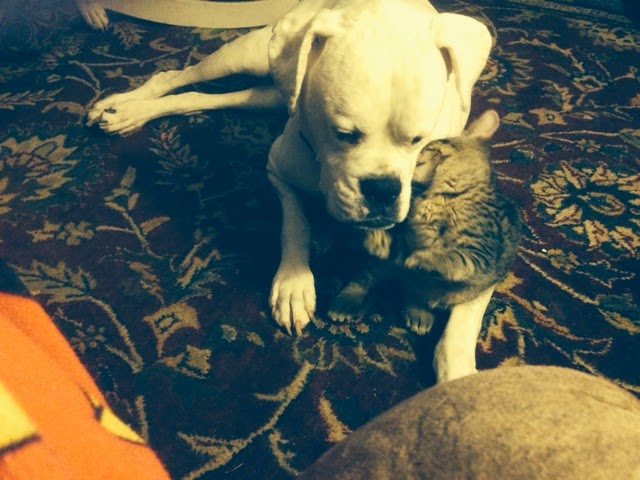 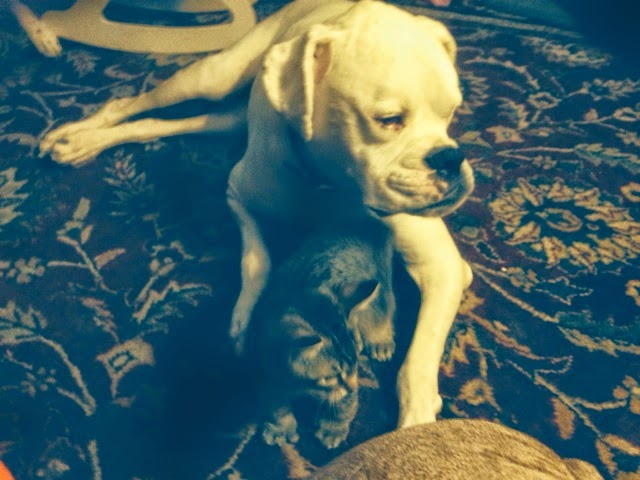 The Monkees, Episode 15: "Too Many Girls" aka "Davy and Fern"

And we're at the 15th episode of The Monkees, "Too Many Girls," also known as "Davy and Fern." This episode was written by Dave Evans, Gerald Gardner, and Dee Caruso. Dave Evans had previously written "Your Friendly Neighborhood Kidnappers" and "Don't Look a Gift Horse in the Mouth," and would write six more episodes after this one, including the final one. He also wrote episodes of Love, American Style and was a writer for Rowan & Martin's Laugh-In. The writing team of Gerald Gardner and Dee Caruso wrote a total of 22 episodes of the series, and also wrote 11 episodes of Get Smart, an episode of The Ghost & Mrs. Muir, and the Disney movie The World's Greatest Athlete, among other TV shows and movies. "I'm a Believer," by Neil Diamond, is the only complete song in this episode, the third in a row for this song (they were really pushing it!), although a bit of "Not Your Steppin' Stone" also appears in the episode (apparently played live, as it's not a version that was released on any album).

The guests in this episode were Reta Shaw as Mrs. Badderly (a major character actress, she played Aunt Clara Simms in the Lost In Space episode "Return From Outer Space," Mrs. Halcyon Maxwell in The Ghost and Mr. Chicken, Miss Witherspoon in The Man From UNCLE episode "The Suburbia Affair," Mrs. Sedley in The Girl From UNCLE episode "The Fountain of Youth Affair," Martha Grant, the housekeeper on The Ghost & Mrs. Muir, Aunt Hagatha and Bertha on Bewitched, and Mrs. Grindley in Escape to Witch Mountain, among many other roles), Kelly Jean Peters as Fern (she would later play Nicole in The Invaders episode "Dark Outpost," Jackie Cameron in The Green Hornet episode "The Silent Gun", Lori in The Sixth Sense episode "Dear Joan: We're Going to Scare You to Death," Martha Lovitt in the Kung Fu episode "The Stone," Mrs. Washington in the Voyagers! episode "Merry Christmas, Bogg," and many other roles), and Jeff DeBenning as Hack (he had single-episode appearances in My Favorite Martian, Bewitched, and I Dream of Jeannie, and played Mr. Rogers in The Strongest Man in the World). Also in the episode, uncredited, were Roxanne Albee (who appeared, uncredited, in nine episodes altogether), Valerie Kairys (who appeared in 14 episodes altogether, as well as appearing in the Monkees movie Head, and two episodes of Batman, playing Kity in "The Sandman Cometh/The Catwoman Goeth"), and David Price (he was in 22 episodes of the show uncredited, and was Davy's stand-in in 57 episodes, plus appeared as a drummer in the special 33 1/3 Revolutions Per Monkee. He would be introduced on-screen as himself in "The Christmas Show," among other crew members).

It's the last Cool Stuff of the month, and we're still featuring Superman items!

First up is this 1950s Kellogg's premium, the Krypton Rocket Set! Obviously, this is one of those rockets where you pressurize the capsule with water and then launch it. More after the jump!

P-F Shoes was one of the regular advertisers in the Fawcett Comics of the Golden Age, with their ads featuring what they claimed were "Jim Wise Real-Life Sports Stories" -- I'm not sure how much I believe the real-life aspect of it, myself. Perhaps they were stories that were intended to be like real-life situations, I don't know. Of course, all of these stories are about kids who became better athletes and the like through the miracle of P-F Canvas Shoes! Take a look:

Other Appearances: Beneath the Planet of the Apes (1970), 20th Century-Fox (see Miscellaneous)

Merchandising: Dr. Zaius was produced as an 8” action figure by Mego. AHI produced at least three Dr. Zaius toys, a parachutist, figural water pistol, and a horseback rider. Other Zaius merchandise included a Halloween costume for kids, a plush doll, and numerous other items. Most Planet of the Apes toys featured Zaius one way or another. A more recent figure was produced by Kenner.

Biography: Dr. Zaius is a statesman in Ape City during the latter half of the 40th century. He's a leading member of the Ape National Assembly, and holds the dual roles as Minister of Science and Chief Defender of the Faith (although he holds more with the latter role than the former). He appears more or less to be the leader of Ape City, and thus holds a lot of power. He'd always made a great effort to hold back the human-curious studies proposed by the chimpanzee scientists (particularly Cornelius and Zira). He is fond of quoting the Articles of Faith set down by the Lawgiver, and believed that anything counter to the Sacred Scrolls was heresy. One of the few apes to know the actual origins of simian culture, Zaius always feared that one day humans might regain their former intelligence and overthrow the apes, as the apes did before him.

Zaius' fears were brought to life when George Taylor, an astronaut from 20th Century Earth, was captured with his fellow astronauts after crash-landing on the planet. One of Taylor's crewmates were shot and killed by gorillas, while another one was given a lobotomy. Taylor survived only because a gunshot wound to his throat made him unable to speak for some time. Thanks to the efforts of Zira, the chimpanzee veterinarian, Taylor recovered and provided evidence of his intelligence, especially when he regained the power to speak. Zaius ordered Taylor's death, but Zira and Cornelius helped him to escape the city and flee to Cornelius' archaeological site in the Forbidden Zone. Accompanied by gorilla soldiers, Zaius followed them there, but he was ambushed by Taylor. Zaius was shown artifacts Cornelius found that proved intelligent humans preceded apes, and Taylor forced Zaius to admit he knew about the previous human culture all the time. Taylor and Nova, a mute human he'd fallen in love with, left the camp to find “his destiny,” in Zaius' words (he'd learn that this was the future Earth, of course). Zaius had agreed to drop the charges against Cornelius and Zira, but as soon as Taylor was gone, he ordered them arrested, and the archaeological site blown up.

Zaius might have believed that Taylor would be gone forever and no longer a threat, that wouldn't be the case. Zaius did bring Cornelius and Zira to trial, but moved for clemency on their behalf (probably figuring they'd be cowed into obedience from that point onward). When gorilla General Ursus proposed leading his army into the Forbidden Zone to wipe out the last of the humans there and claim the land for the apes, Zaius supported him and agreed to come along, unaware that a second 20th century astronaut, Brent, had arrived (he'd been seeking Taylor). Brent had met up with Nova (who was separated from Taylor thanks to the mutant humans of the Forbidden Zone's ability to create illusions), and later met Cornelius and Zira, and eventually followed Taylor to the Forbidden Zone, where he was captured and found Taylor a prisoner also. The underground headquarters of the mutants was attacked by the apes, and in the fighting, Brent was killed, as was Nova, by the gorillas. The mutants had a doomsday bomb which they intended to use that would destroy the entire world, but were prevented from doing so by the attack. Nova's death and Taylor being wounded led Taylor to ask Zaius to help him stop the bomb from going off, but when Zaius refused, Taylor deliberately set off the bomb, destroying the future Earth and killing everyone.

Powers: None, so far as super abilities go, unless you count his evolved state, although that's no different from the other apes in his culture.

Miscellaneous: Other versions of Zaius include the original one in Pierre Boule's novel, the TV series Planet of the Apes also had a Zaius, as did the animated Return to the Planet of the Apes. I plan to deal with each of these separately, as they appear to be different characters, or at least alternate reality versions.

Email ThisBlogThis!Share to TwitterShare to FacebookShare to Pinterest
Labels: Ape of the Geek, planet of the apes