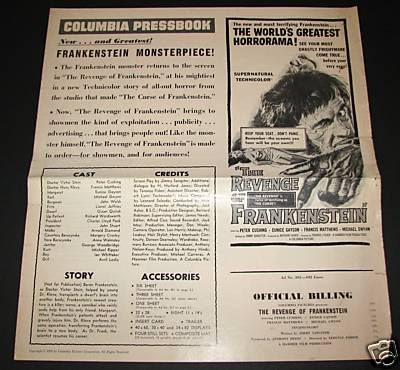 My history with pets is mostly with cats, although my first pet was a dog named Poochie. I don't remember what breed he was, only that I clearly wasn't old enough to care for a small dog, and when my parents decided I was possibly going to injure him when playing with him, they gave him away to someone else. We had other dogs -- larger dogs -- as I grew up, including a few German Shepherds and a German Shephard/Collie mix, but none of those dogs were mine. The mix had a litter of puppies, and one of them my siblings and I named Champ. I desperately wanted to keep Champ, but my parents were firm about giving away all the puppies. Later, Champ's owner had to return him to us, but by that point, he was pretty much untrainable (at least, for us), and I believe we gave him to the Humane Society.

So as I said, I mostly had cats... my first one was named Jerry (and as I always told people back then, I knew that Jerry was the mouse in the cartoons... I just liked the name Jerry), and he was followed by Skippy, and that was it for my cats while I was growing up. Much later, after my time in the Navy, I had a Siamese mix I named Selina (you can well guess why), who had a litter of three kittens I ended up keeping named Tigra, Spooky, and Irena. A few years after Selina disappeared (one of the reasons I decided not to let my cats outside ever again), I adopted another cat I named Taz. Those last four cats were given away when I moved to Wisconsin to be with my first wife, and I didn't believe I'd get a pet again.

So flash forward to 2004: Following the death of my first wife, Barbara, I moved back to Washington, and after a fitful search for a new job, I got hired by the newspaper in Olympia, and I moved from Tacoma to there. Although the apartment I lived in didn't want pets, I still found myself thinking I'd like to get a dog, a white dog I could name after Krypto the Superdog. 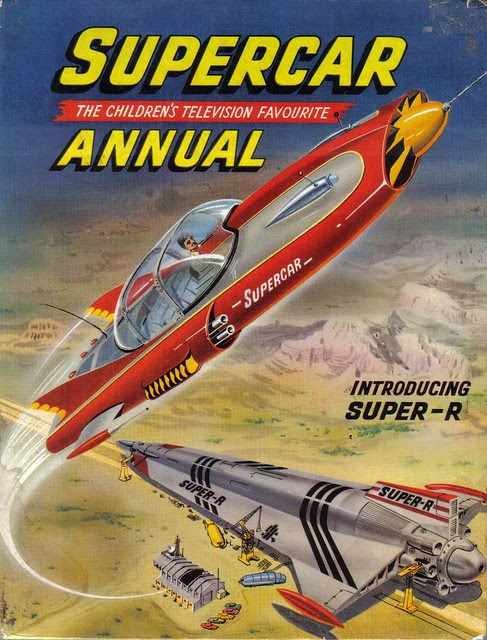 You know the drill by now, right? Original cover and reprint... let's go! 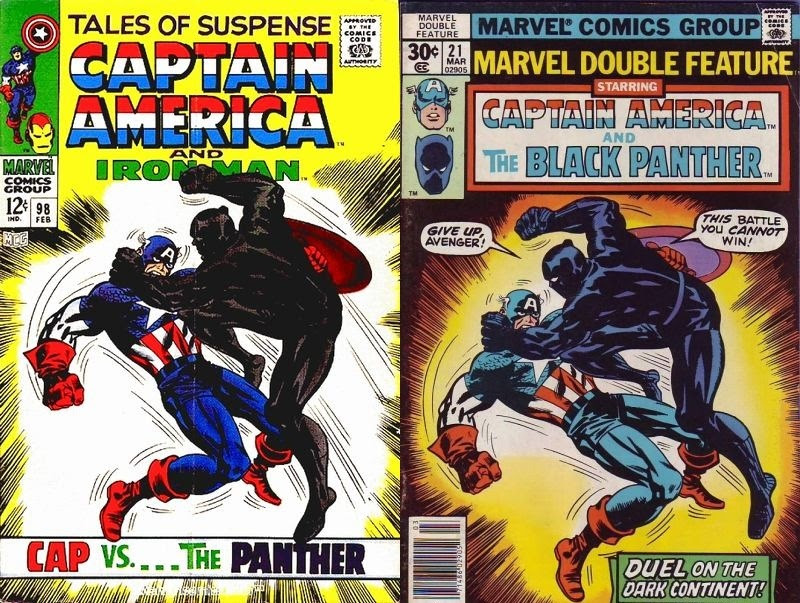 First up, here's Tales of Suspense #98 and Marvel Double Feature #21... obviously the blurb's entirely different, and the figures have been shifted down... but note also that it's been rotated counter-clockwise, and it looks as though the Black Panther figure's been altered a bit, especially on the head. 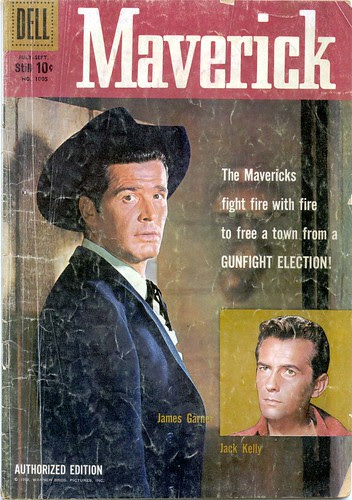 I don't have the audio on this one, so it's CBT time for this one... or rather, two! 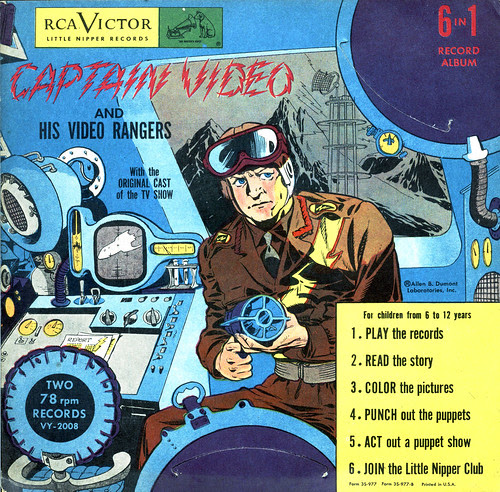 And we're up to episode 16 of The Monkees, "Son of a Gypsy," which was written by Treva Silverman and Gerald Gardner and Dee Caruso. I believe I've covered their other credits before.

The only song performed in this episode is the Neil Diamond-penned "I'm a Believer," which, as I've noted before, was on the Monkees' second album, however, "Let's Dance On," from the first album, is performed in part at the ball. Guest stars in this episode were Jeanne Arnold as Maria, Vincent Beck as Marco, Victor Tayback as Rocco, Mario Roccuzzo as Zeppo, Gene Dynarski as Kiko, and Elisabeth Camp as Madame Ramtha. Also look for director James Frawley as a Yugoslavian guest! The same year she appeared in this episode, Jeanne Arnold played Grace in Munster Go Home, and appeared in two episodes of Bewitched in 1972. Vincent Beck had played Voldar in Santa Claus Conquers the Martians, guested in episodes of Mister Ed, Gilligan's Island, Get Smart, Honey West, The Girl From UNCLE, The Man From UNCLE, T.H.E. Cat, The Time Tunnel, Lost in Space, The Wild Wild West, The Immortal, Alias Smith and Jones, Mission: Impossible, The Magician, and The Invisible Man (1975). He'd previously appeared in the first episode aired of The Monkees, "Royal Flush," playing Sigmund, and returned to play Ivan in "The Card Carrying Red Shoes." Mario Roccuzzo later guest starred in the 1974 TV movie Wonder Woman, appeared in the TV movie The Clone Master, guested on an episode of the 1985 Tales from the Darkside as well as appearances in episodes of Sledge Hammer!, Star Trek: The Next Generation and The Flash, and played Nick Bezis in the 2001 TV movie Earth Vs. the Spider. Vic Tayback will be forever remembered as Mel  on Alice, but he'd also previously appeared in episodes of The Man From UNCLE, I Dream of Jeannie, Captain Nice, Get Smart, and Star Trek (playing Krako in "A Piece of the Action"). He previously played George in the episode "Your Friendly Neighborhood Kidnappers," and would appear again, playing Chuche in "Art for Monkees' Sake" in 1967. Later, he appeared in episodes of Mission: Impossible, Land of the Giants, Bewitched, multiple episodes of Fantasy Island, two episodes of the 1984-1988 Tales From the Darkside, and voiced Carface in All Dogs Go to Heaven. Gene Dynarski had previously played Benedict in the Batman two-parter "An Egg Grows in Gotham/The Yegg Foes in Gotham," would later appear in another Monkees episode, playing Toto in "Monkees Chow Mein," two episodes each of Mission: Impossible and Voyage to the Bottom of the Sea, appeared in two Star Trek episodes (playing Ben Childress in "Mudd's Women" and Krodak in "The Mark of Gideon"), and would later appear in single episodes of Land of the Giants, Kung Fu, The Invisible Man, Walt Disney's Wonderful World of Color (playing Lawrence in "Beyond Witch Mountain"), Star Trek: The Next Generation, and The X-Files. He also played Ike in Close Encounters of the Third Kind. Elisabeth Camp had previously appeared in a small role in the episode "Dance, Monkee, Dance." 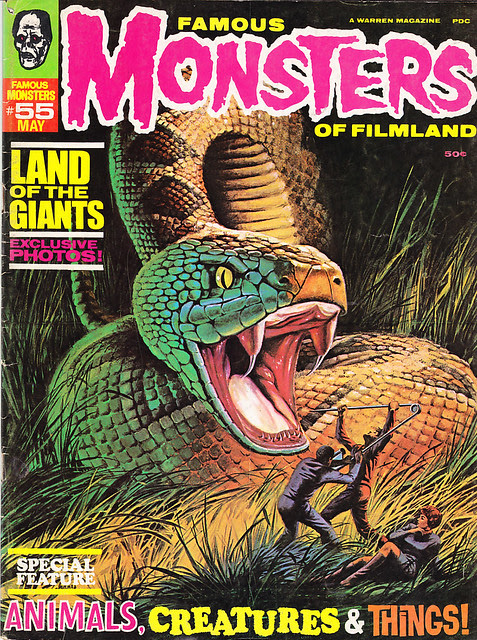 Got another bunch of Superman items for you again... 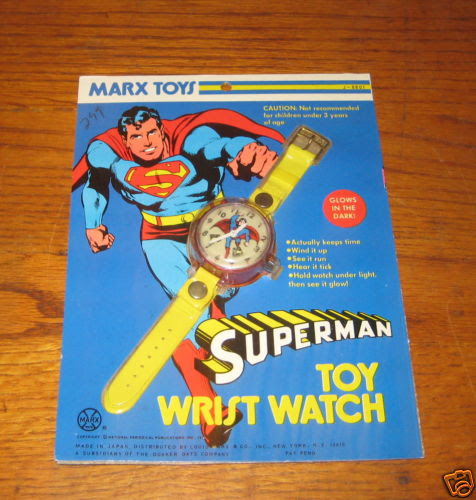 First up is this Superman toy watch produced by Marx in 1974!

One series of ads I've been looking forward to running here for some time were the full-page ads featuring the adventures of R.C. and Quickie, promoting Royal Crown Cola! These two buddies started their adventures while they were in the army, and after the war, continued to have adventures as civilians! This time around, we'll look at the war years: 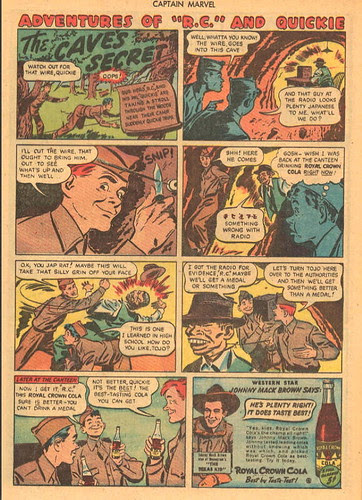 It's been 14 days, time for more Kirby Kovers! 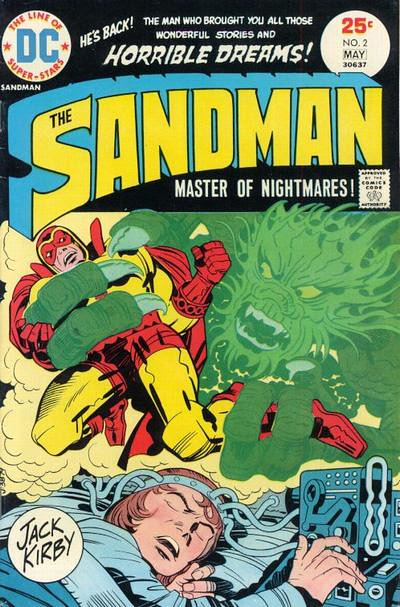 We begin with Sandman #2, and this wonderful image of the Sandman caught up in a boy's dreams... been way too long since I read this book, was that Jed on the cover? The color hold for the dream monster really adds a nice touch, doesn't it?

Ape of the Geek: Blip!

Species: Monkey, either of Terran or extraterrestrial origin.

Merchandising: Blip has appeared along with Space Ghost in a number of pieces of merchandise, from puzzles to a Big Little Book.

Biography: Unless something was mentioned in the DC Space Ghost mini-series, not much is known about how Blip became a member of Space Ghost's team. In many ways, Blip is Space Ghost's “secret weapon,” often disregarded as a threat by villains and able to help Space Ghost out of a jam. According to one website, Blip is Jan and Jace's pet.

Powers: Blip has no powers of his own, except for a higher than normal intelligence for a monkey. He is capable of using the jetpack and inviso-power belt provided him by Space Ghost, as well as understanding spoken commands from Space Ghost and his assistants, Jan and Jace.

Miscellaneous: In the original cartoons, Blip was voiced by Don Messick. For the Space Stars episodes, he was voiced by Frank Welker.

Email ThisBlogThis!Share to TwitterShare to FacebookShare to Pinterest
Labels: Ape of the Geek, Hanna-Barbera 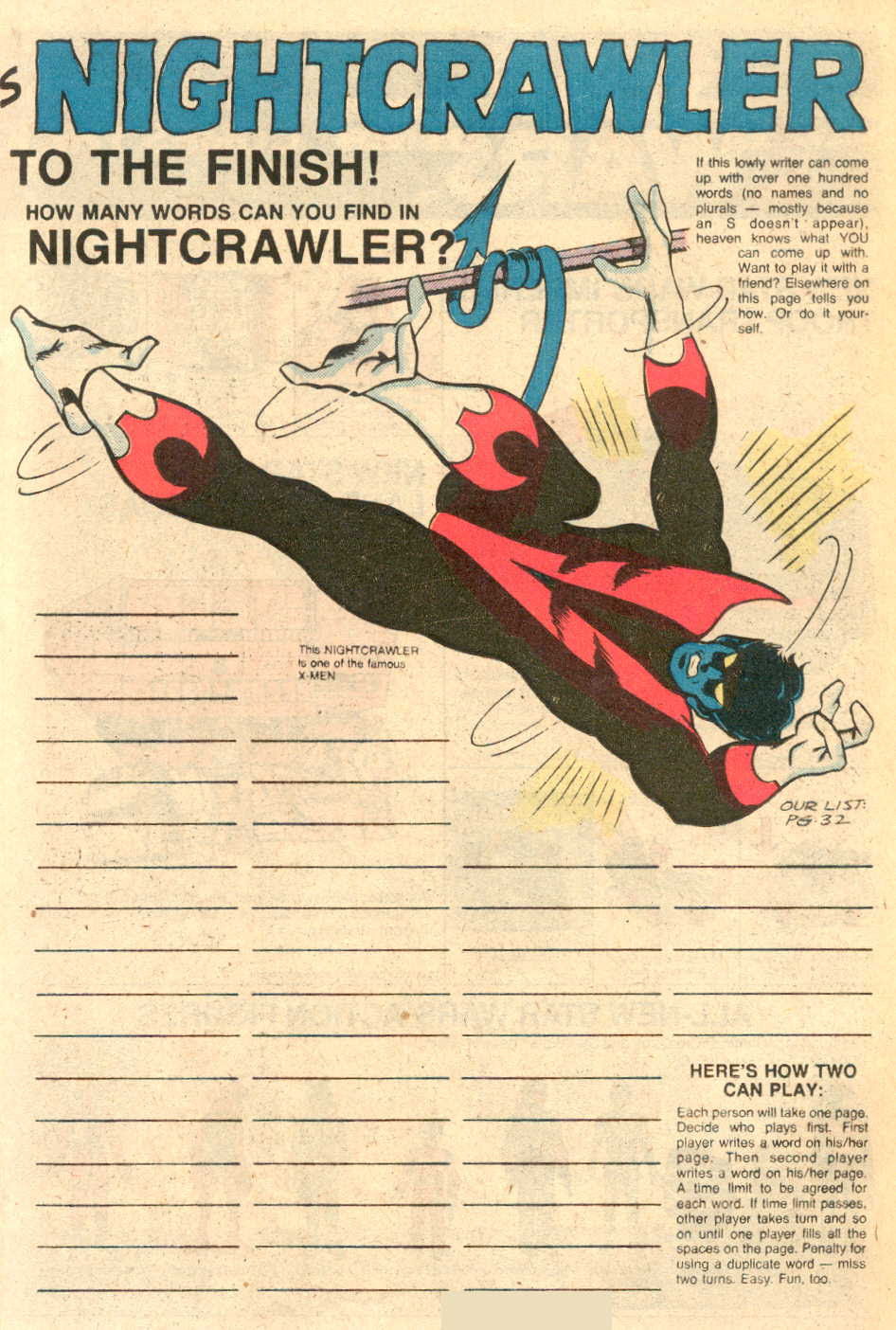 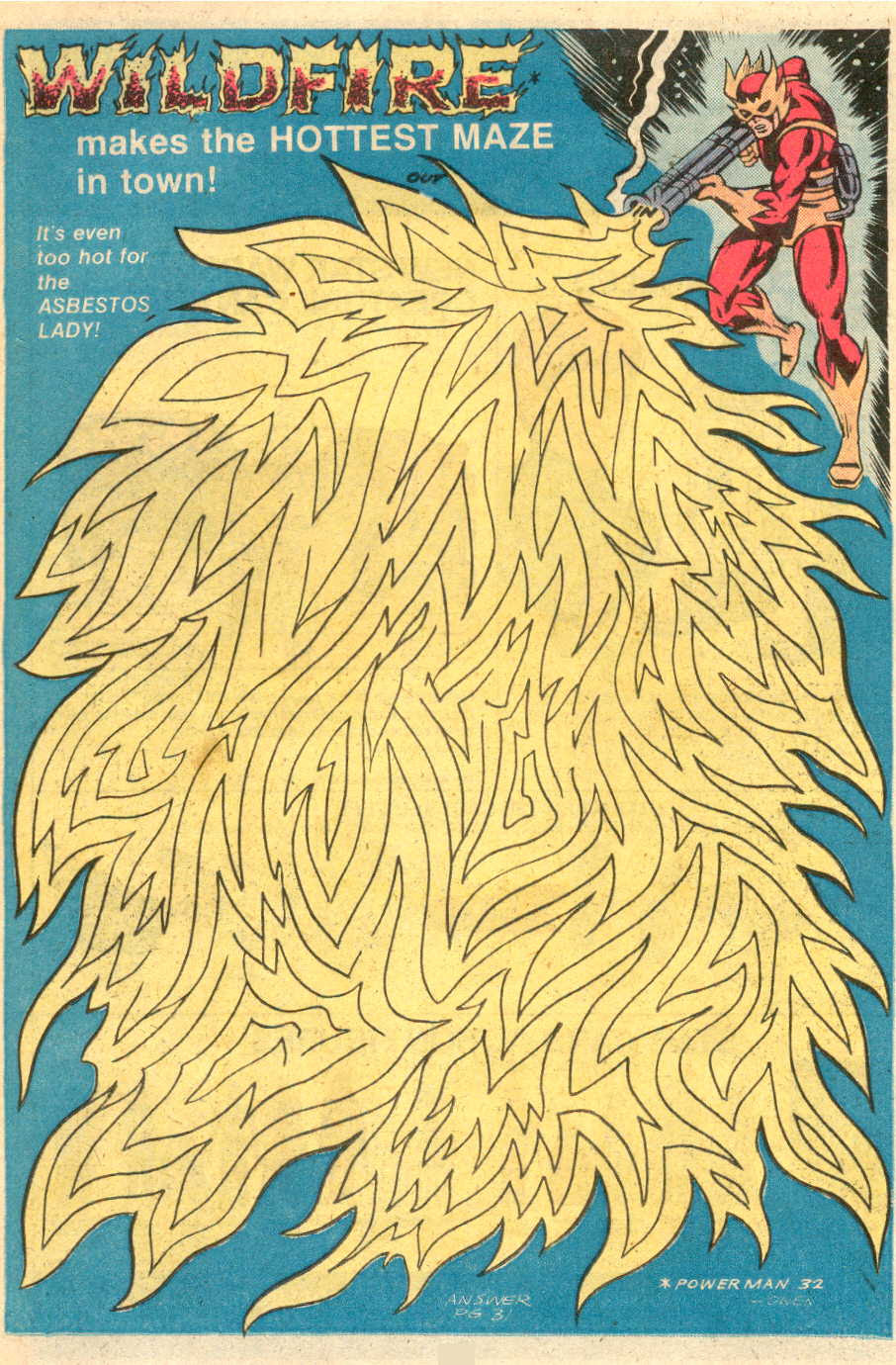 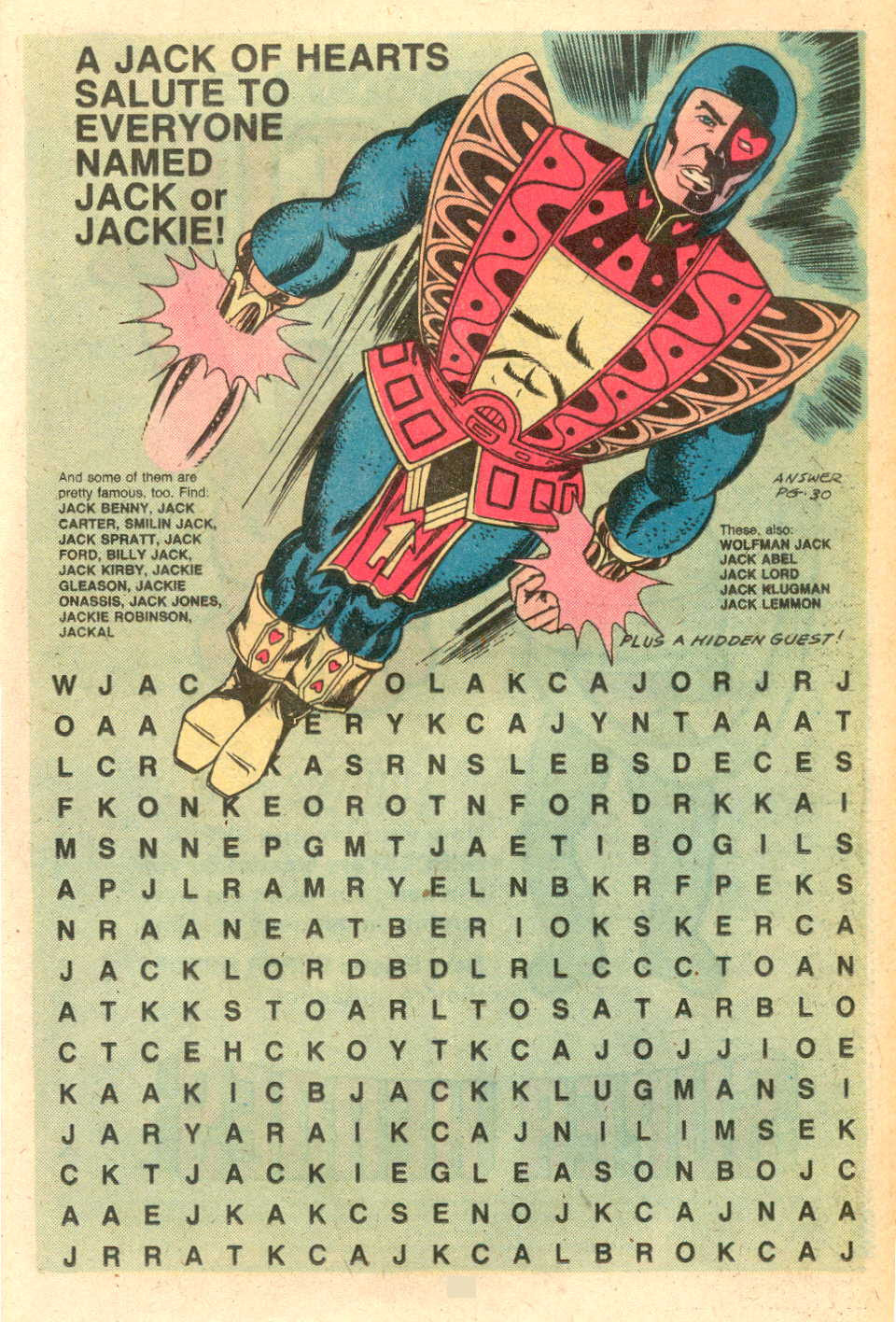 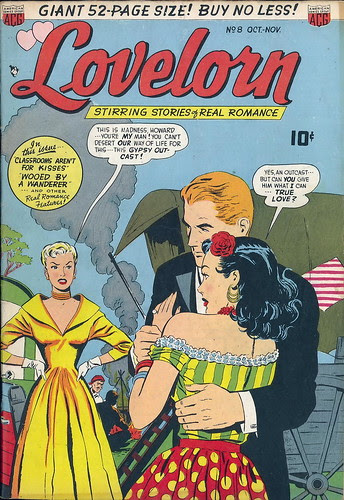