Time to dip in the well that's Marvel Fun and Games Magazine again for the bi-weekly Puzzle Time post! As always, answers after the jump! 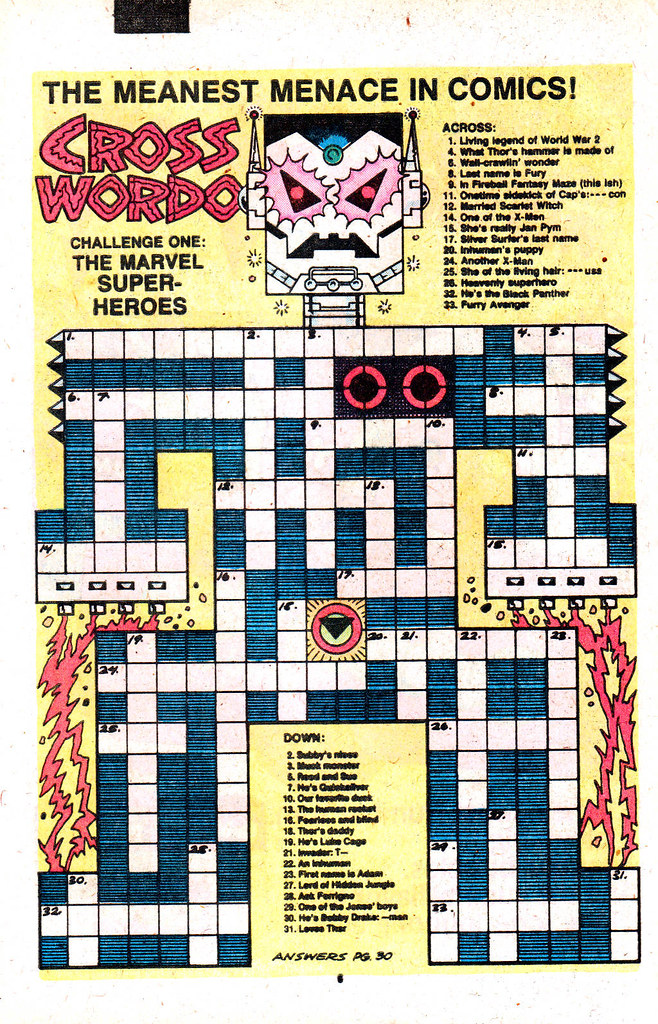 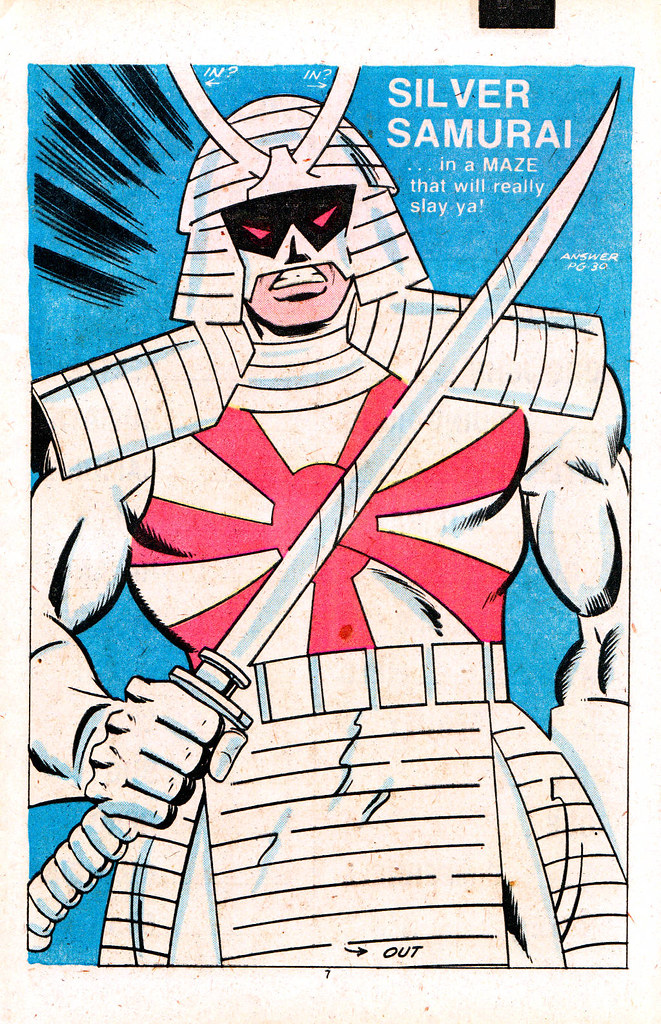 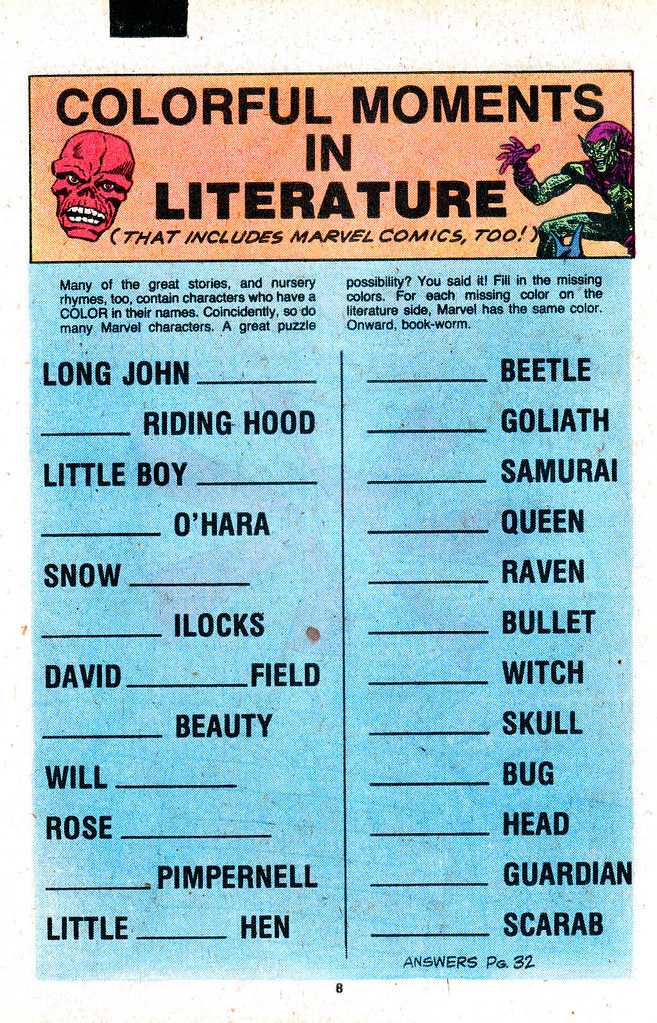 It's that time again, friends, when I show two covers of Marvel comics side by side -- the original cover, and the cover of the book that reprinted that first book -- and compare the two, looking for anything that might've been changed! Feel free to play along, and offer any other changes you spot that I miss in the comments! 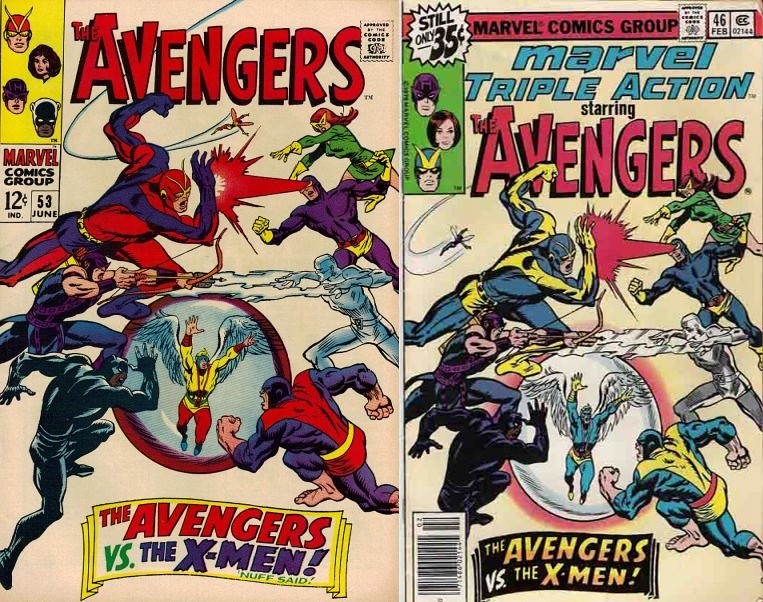 And our first look is between Avengers #53 and the reprint in Marvel Triple Action #46. The first thing I've noticed is that the original cover was slightly reduced, probably requiring some additional drawing on the sides to extend the art. Next, the Wasp's position has been moved so she's behind Goliath, with all-new zoom lines put in place. Next, new details have been added to Iceman's ice-blast, in the form of the diagonal lines that had become the standard for showing something being shiny. Of course, the blurb has been shrunken down even more, to allow space for the UPC. I have no idea why Goliath and the Angel had their costumes so dramatically recolored, though! 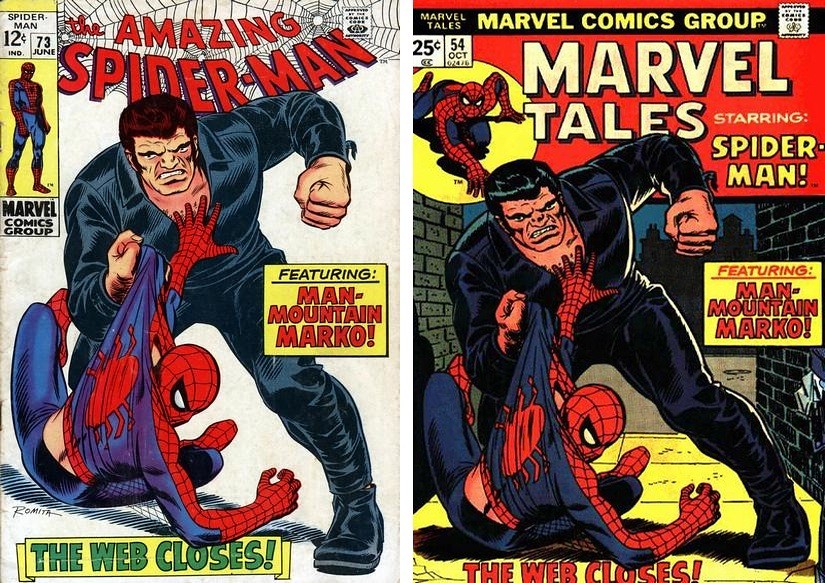 Next, Amazing Spider-Man #73 and Marvel Tales #54... Some major changes done here! Blurbs are reduced and relocated, the entire piece of art is also slightly reduced... and a background has been added completely, along with replacing the shadow! Romita's signature seems to be missing from the new version. 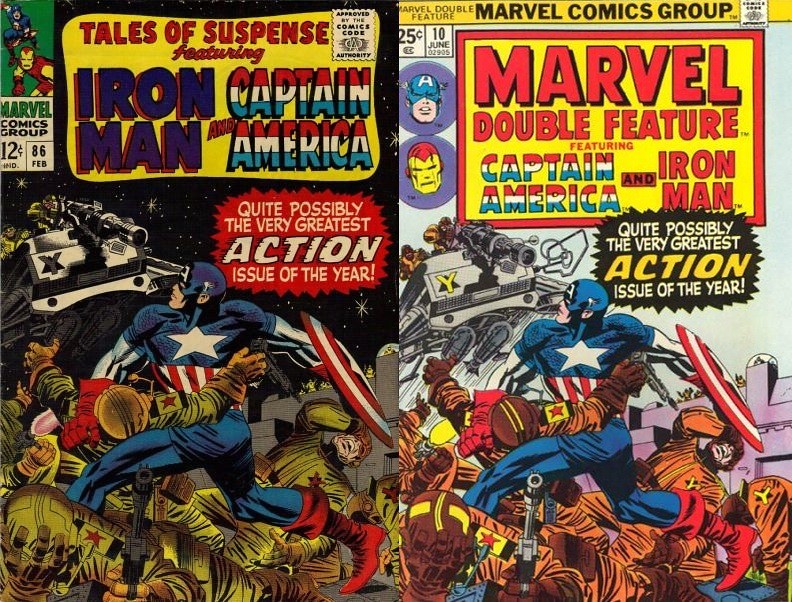 The opposite seems to have happened when Tales of Suspense #86 was reprinted in Marvel Double Feature #10... the sky's disappeared and been replaced with daytime coloring. Also note that the vehicle's gained some new details, particularly on the side above Cap's head, and the word "Action" in the blurb lost its speed lines. 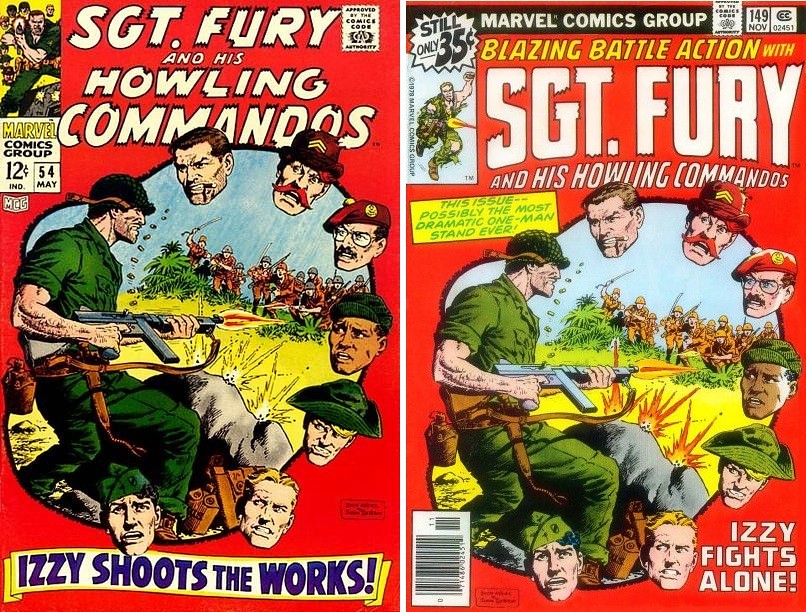 Not too much different between Sgt. Fury #54 and the reprint in issue #149, other than moving the artist credit, shrinking the whole thing down a tiny bit, and replacing the blurb to accommodate the UPC code. 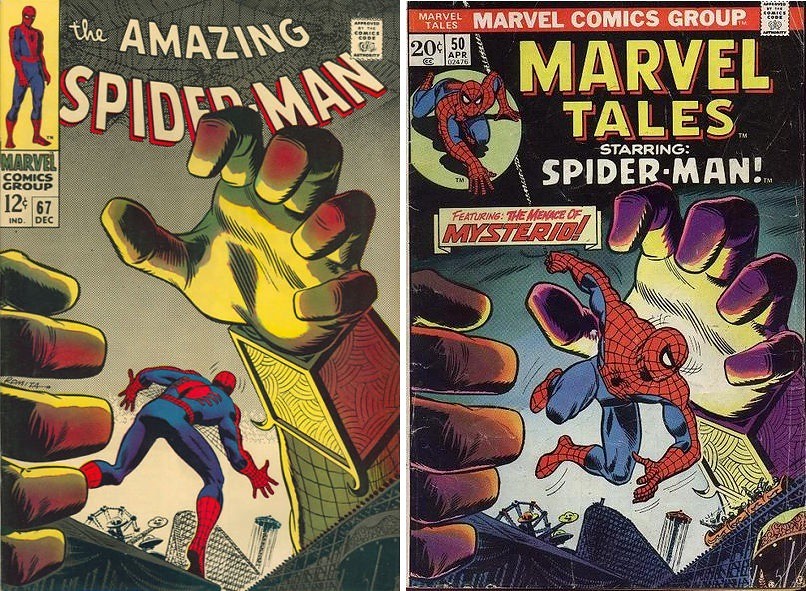 It seems like Marvel changed its mind about covers with the heroes with their backs to us between Amazing Spider-Man #67 and the reprint in Marvel Tales #50. Not only did Spider-Man get completely redrawn in a new position, one of Mysterio's hands was moved down, and a roller coaster car was added! 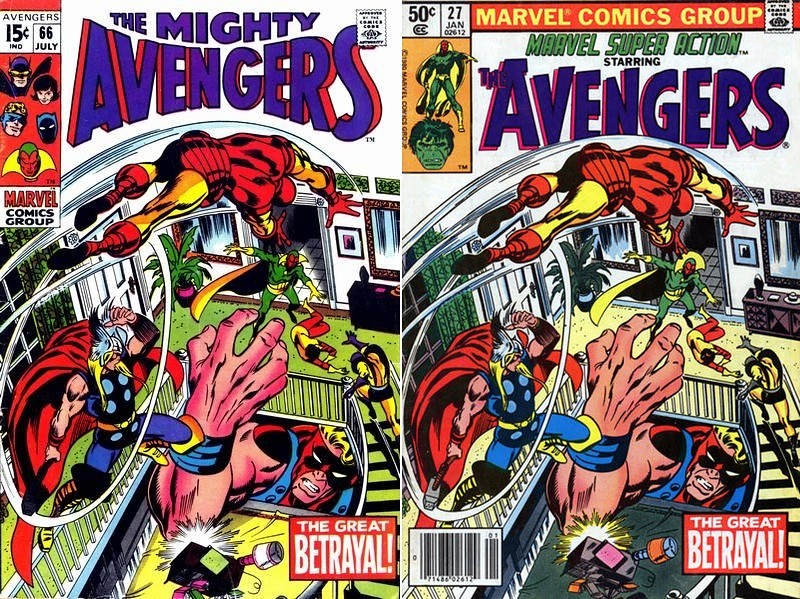 Try as I might, I can't spot any changes between Avengers #66 and the reprint in Marvel Super Action #27.. can you spot any? 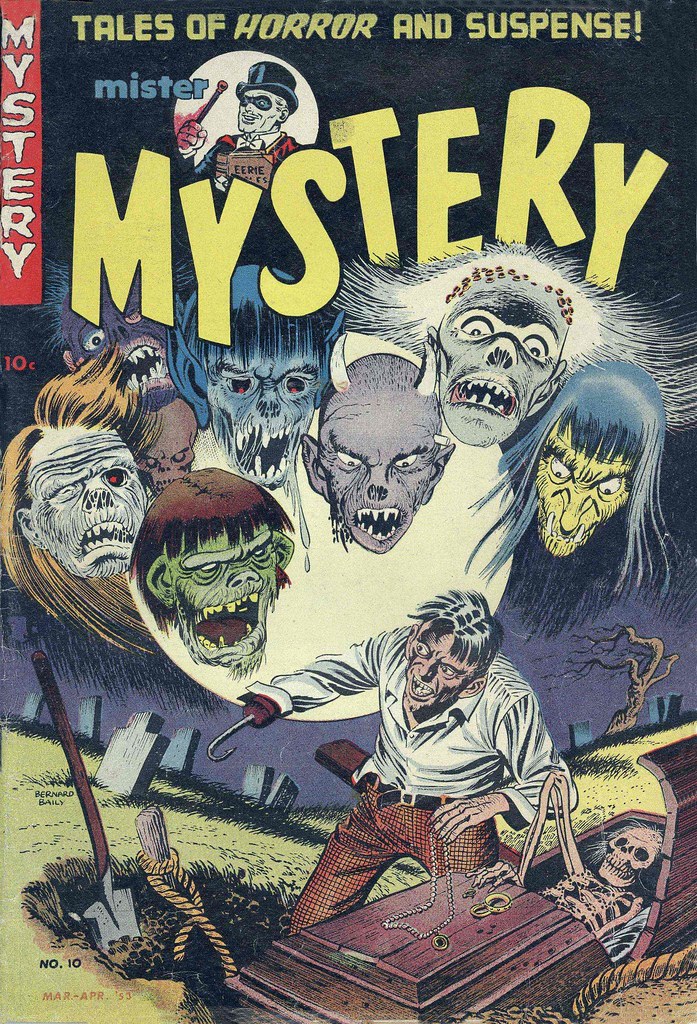 Time for another parade of vintage SF magazine covers! All these are from books that I've either currently got listed on eBay, or have already been sold. Please check my current listings, available on the above right hand corner! 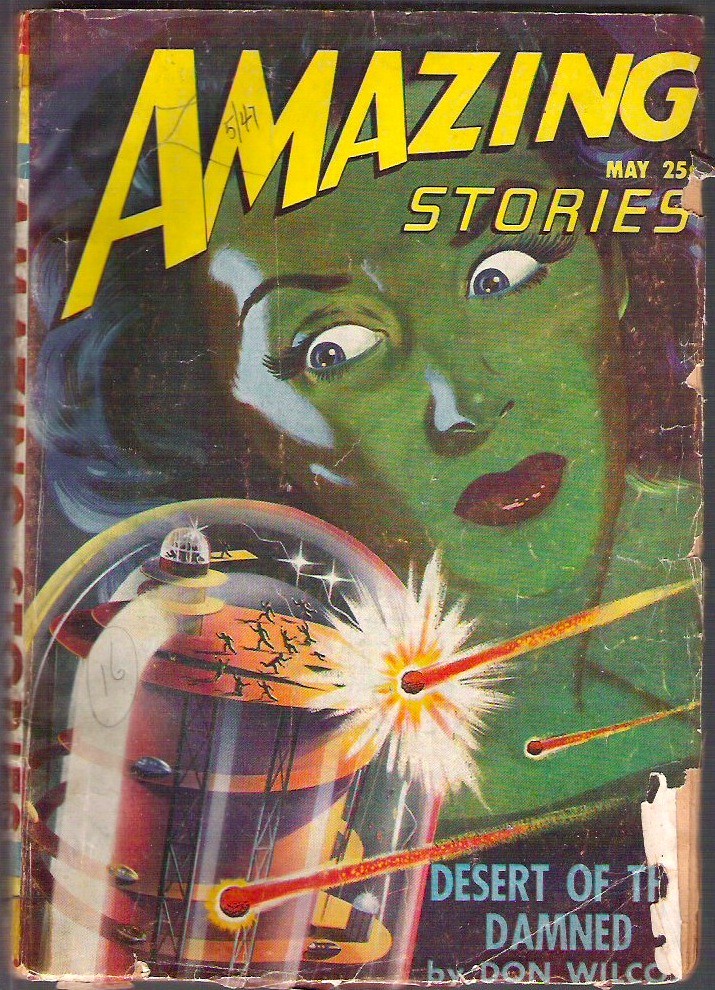 It's an attack on the bottle city of Kandor, as She-Hulk looks on helplessly? Well, that's about what it looks like, doesn't it? 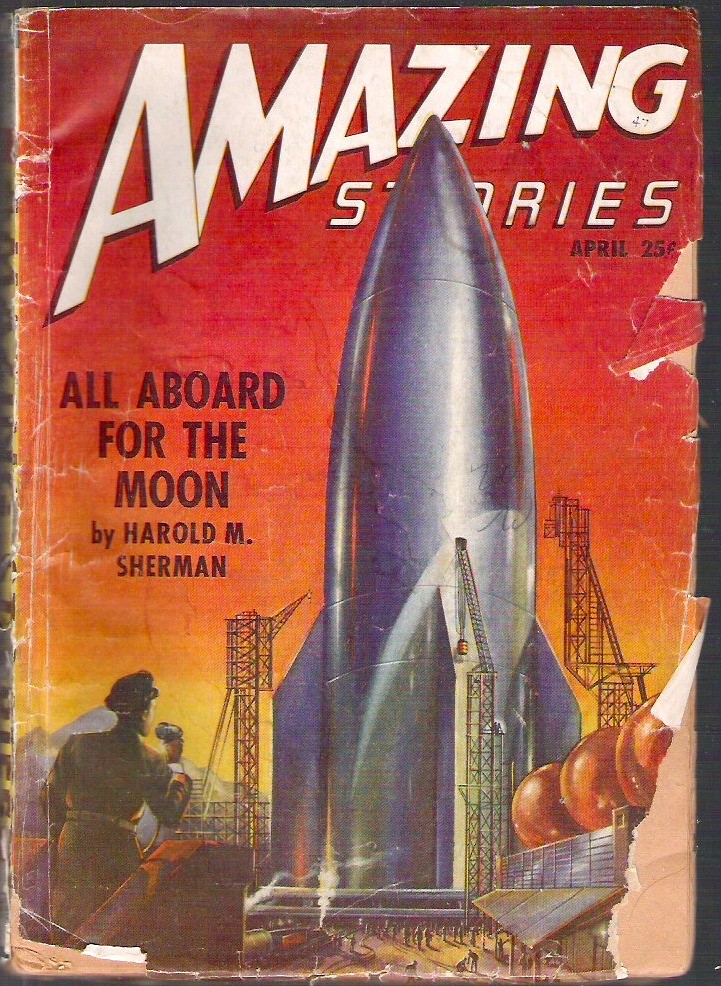 Gotta love these old-style spaceships with the big fins! 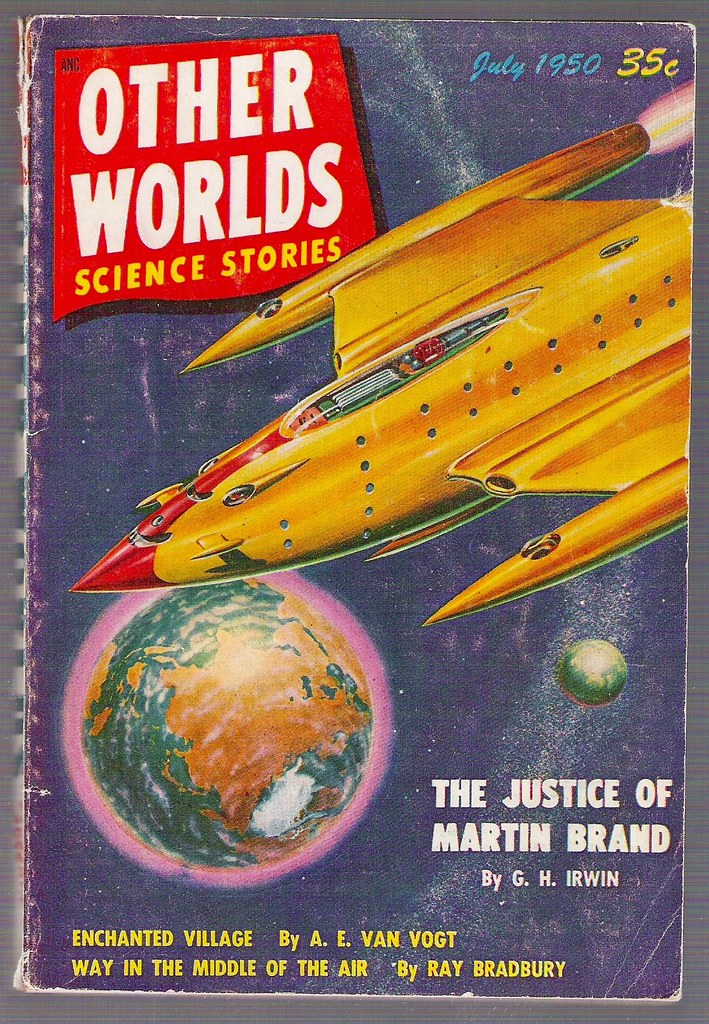 This spaceship wouldn't be out of place in one of DC's Silver Age SF comics, wouldn't it? 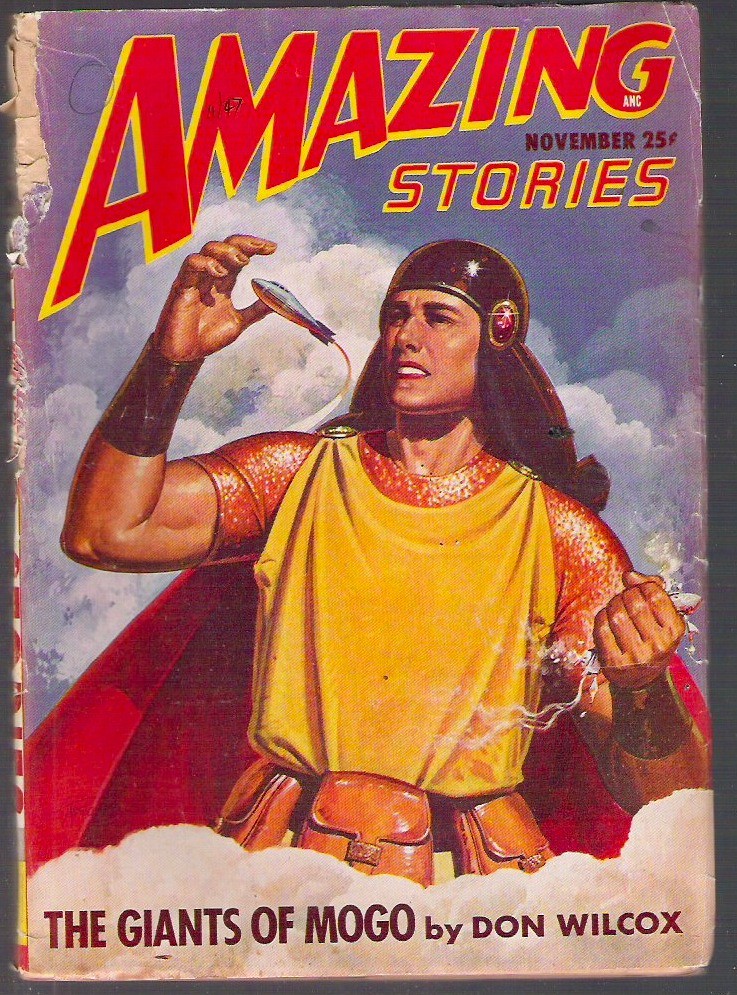 There were a lot of giants on the covers of these books! 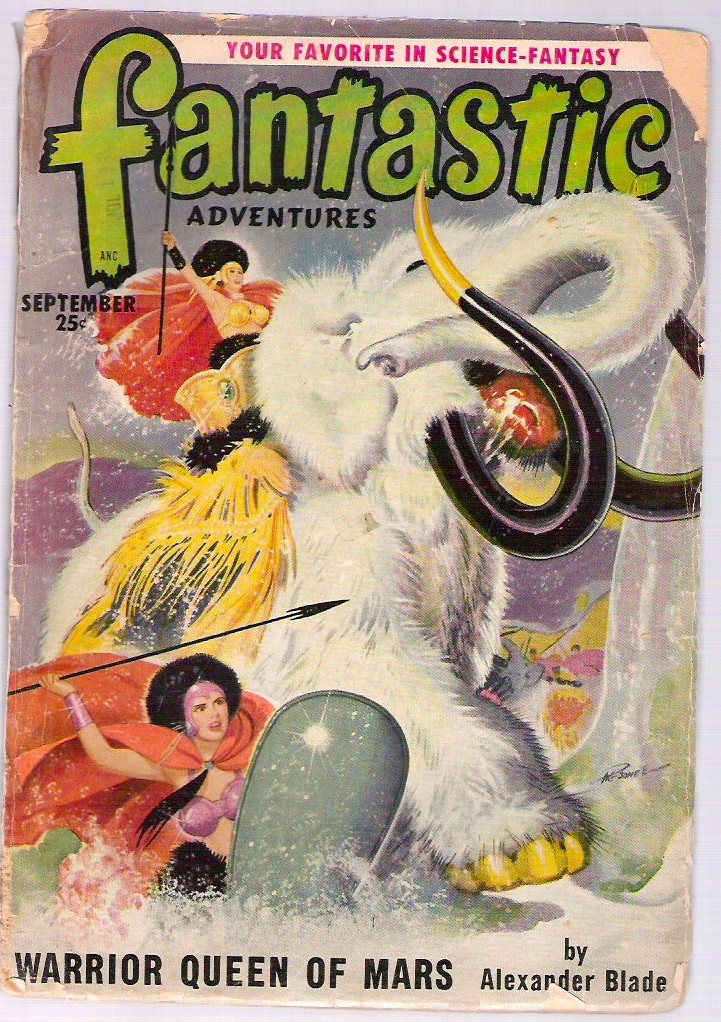 It's amazing to me, here's a group of warrior women operating in what appears to be a polar region of their world... and yet still they dress in bikinis with naught but big cloaks (that fly back uselessly) to keep them warm! 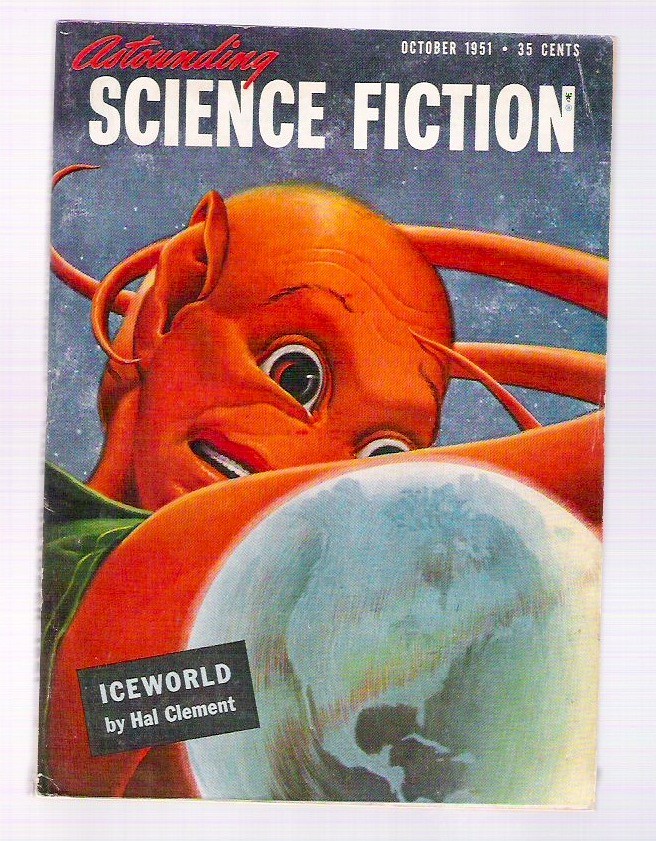 This alien reminds me of someone, but I can't place it... 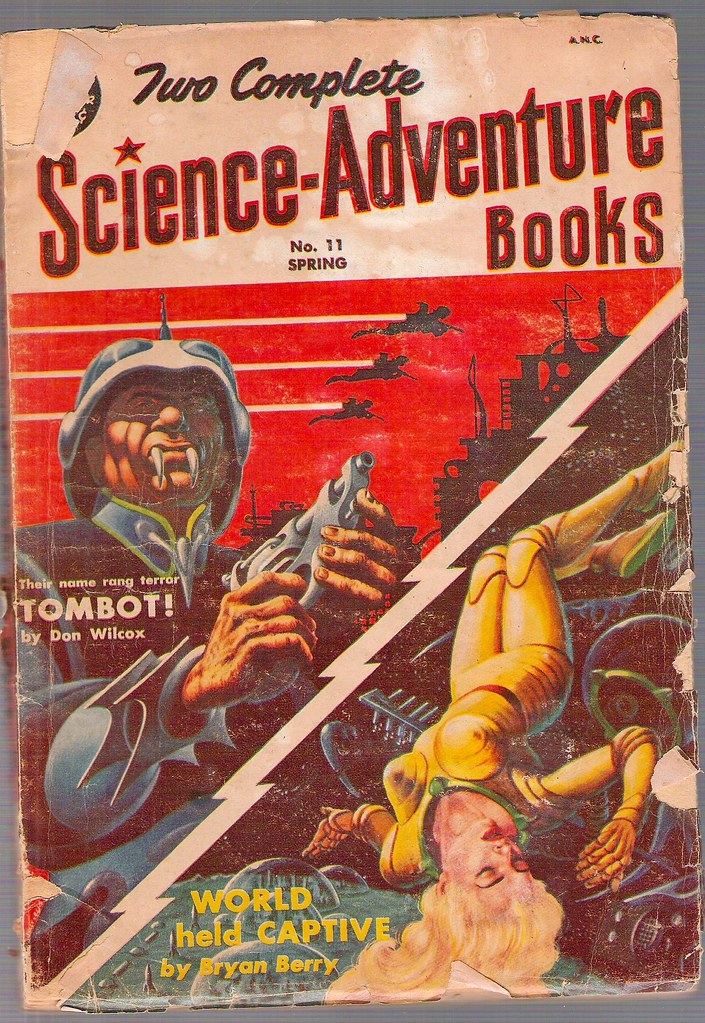 A nice split cover here... certainly provided more flexibility than a standard 50/50 cover (like we're accustomed to seeing on certain issues of Tales to Astonish or Tales of Suspense). I can't imagine how that woman managed to get into that very form-fitting armor, though! 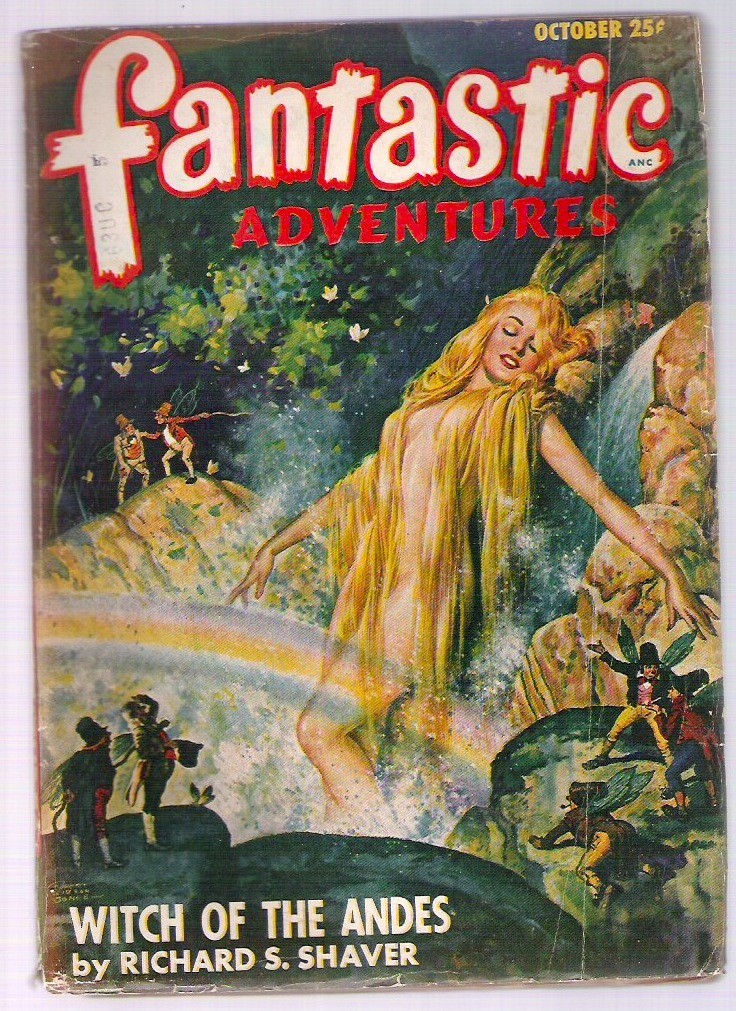 Sex sells, doesn't it? I don't think they could've gotten away with showing much more skin than they did here! Let's face it, this blonde is naked, with her naughty bits just covered by her long, flowing hair! 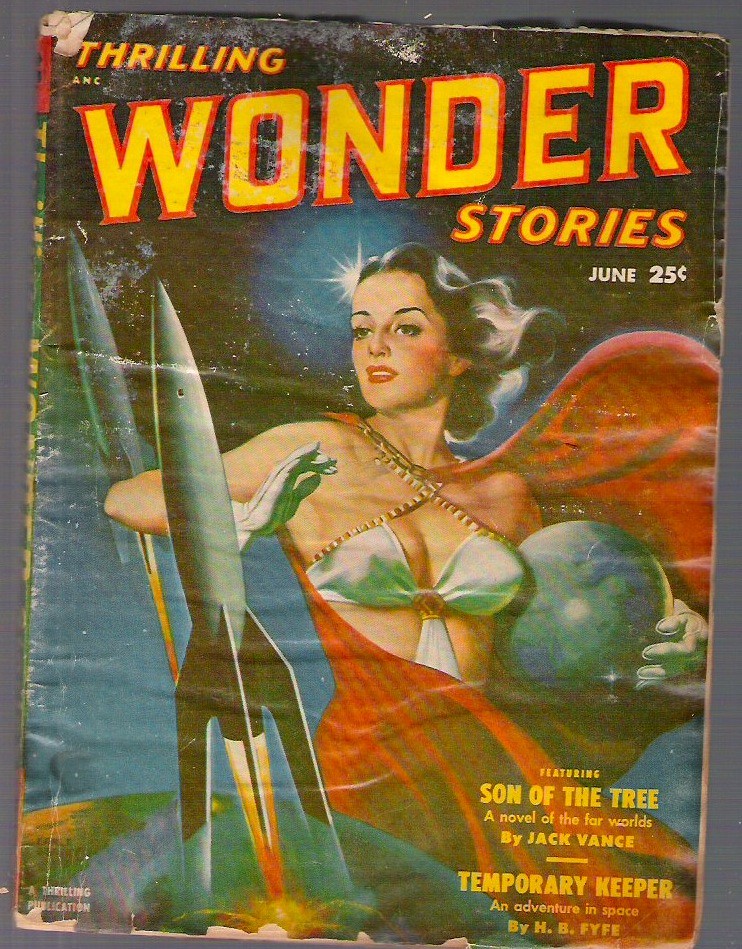 And we'll wrap up this installment with this cover, which appears to feature the Phantom Lady grown to monstrous size, and holding a planet in her hand! But if she's that big, how big are those rocket ships, and where are they launching from??? Surely not from that planet on the bottom, rockets that big would probably push it out of orbit, to say nothing of how they'd be sticking up way beyond the atmosphere even before launch!
Posted by Jon K at 12:01 AM No comments:

And we'll end this month's posts with some Cool Stuff! 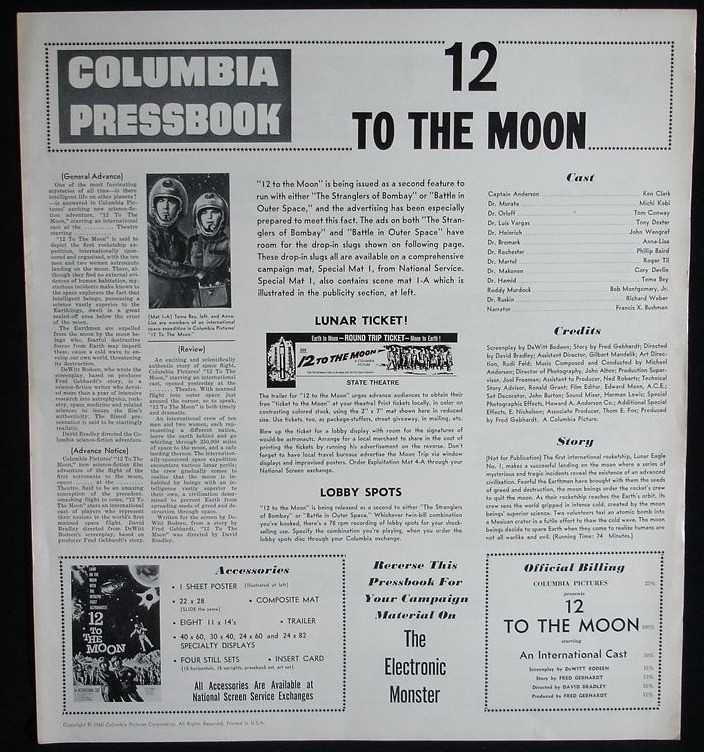 12 to the Moon pressbook!

It's time for some Kirby Kovers! This edition really runs the gambit on the various genres Kirby could draw! 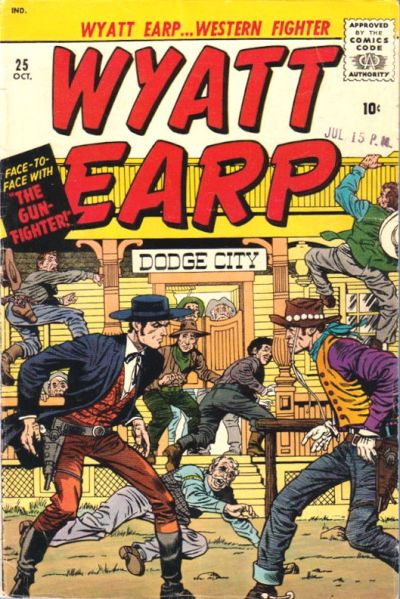