It's that time once again to look at some vintage ads that appeared in the comics, with some comments and occasional research from me! 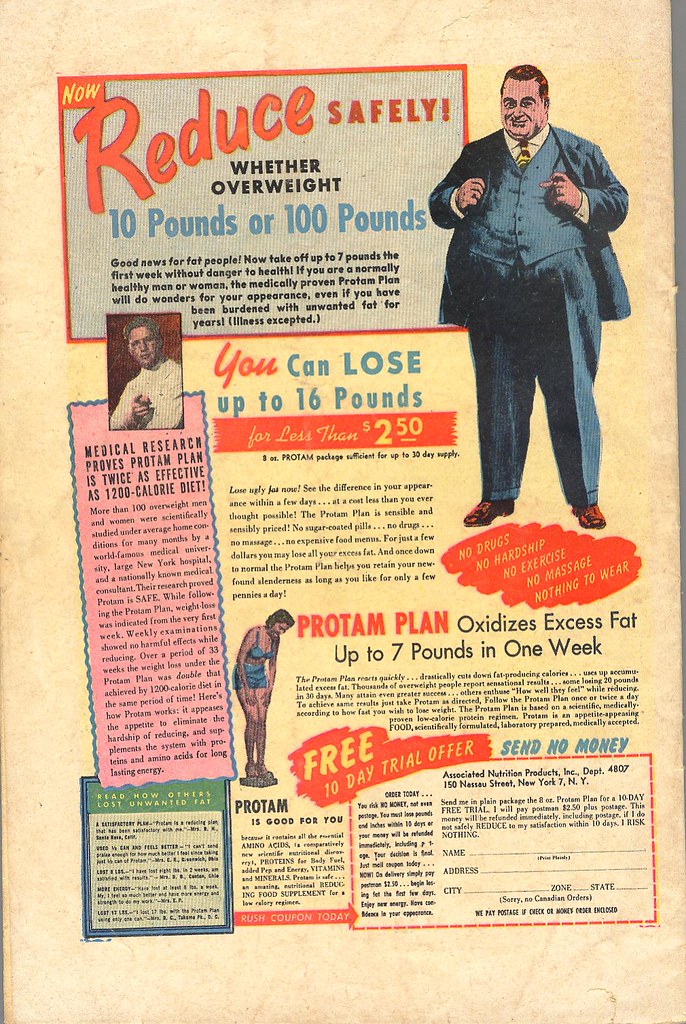 This firs tad comes from Lawbreakers #10, and as you can see, it's for a weight loss plan called "Protam." Now.... there's nothing I've been able to find out about this plan, and what I can see, it's probably some kind of protein supplement. The ad mentions PROteins, viTAmins, and Minerals, which would seem to suggest where the name came from. I have to admit, the picture of the fat man certainly looks like he's not too dissatisfied with his weight, whereas the picture of the woman on the scale looks rather scarecrow-like, doesn't it? Why they didn't do a standard before and after picture is beyond me. 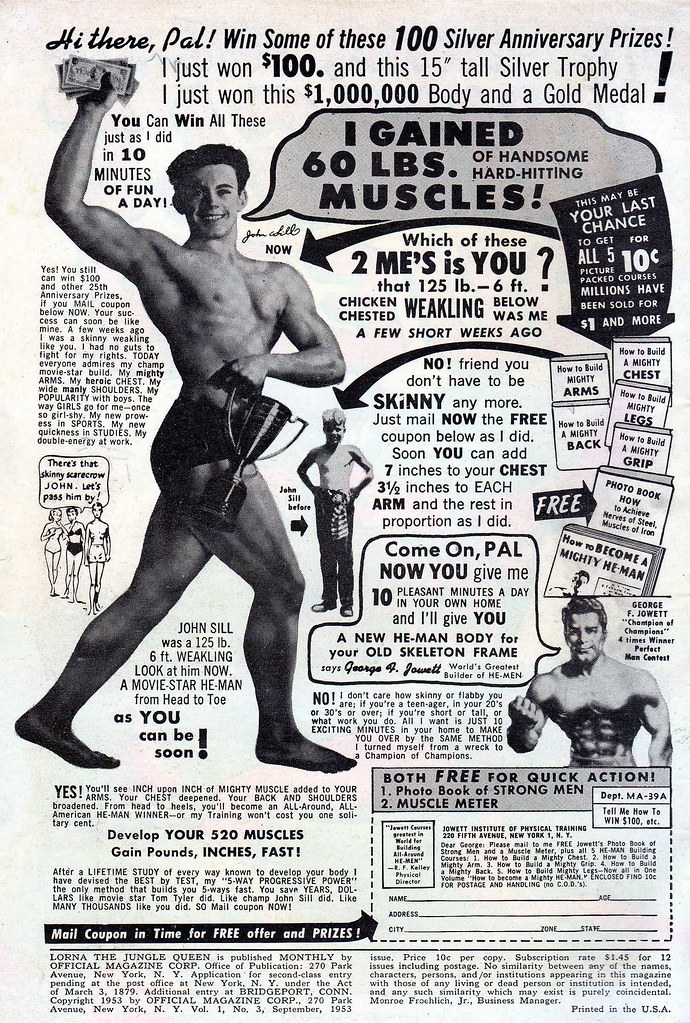 This next one comes from Lorna The Jungle Queen #3, and instead of losing weight, this one helps you put on muscle weight! Yes, in the wake of Charles Atlas, all sorts of muscle men were hawking their own exercise programs, and this one is no different. You can read a brief biography of George F. Jowett at this website... he was a bona-fide strongman! 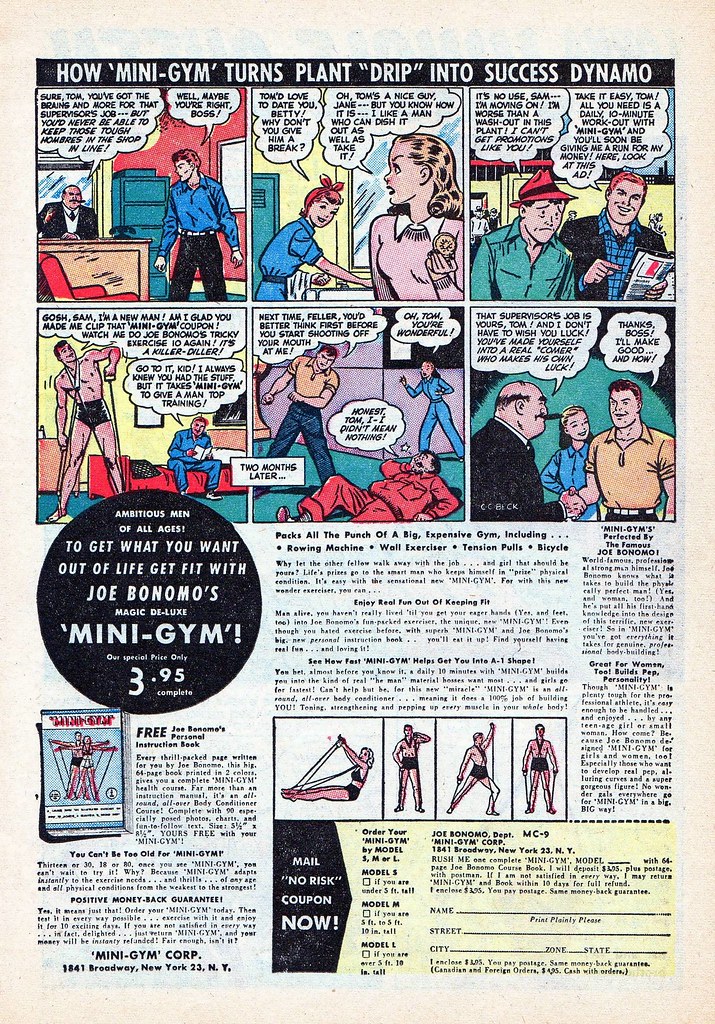 Here's a different bodybuilding ad from the same issue... I was originally going to skip over it, but then I noticed that the comic book panels were drawn by Captain Marvel artist C.C. Beck! I suspect that perhaps he was inked by Kurt Schaffenberger, as the last panel looks a bit like his own work. 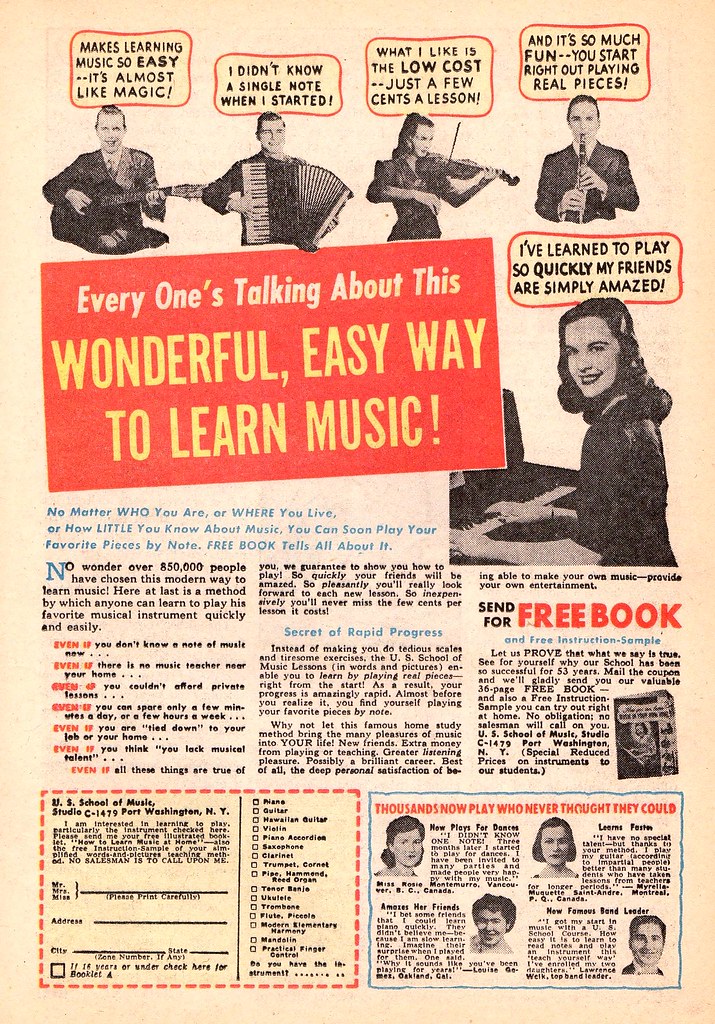 I seem to be in a trend of running ads this month with a "learning" theme to them, as here's one from that same issue of Lorna that promises to teach you how to play any from a number of instruments! What I find interesting about this ad is that it uses photos but accompanies them with comic book styled word balloons lettered by hand! 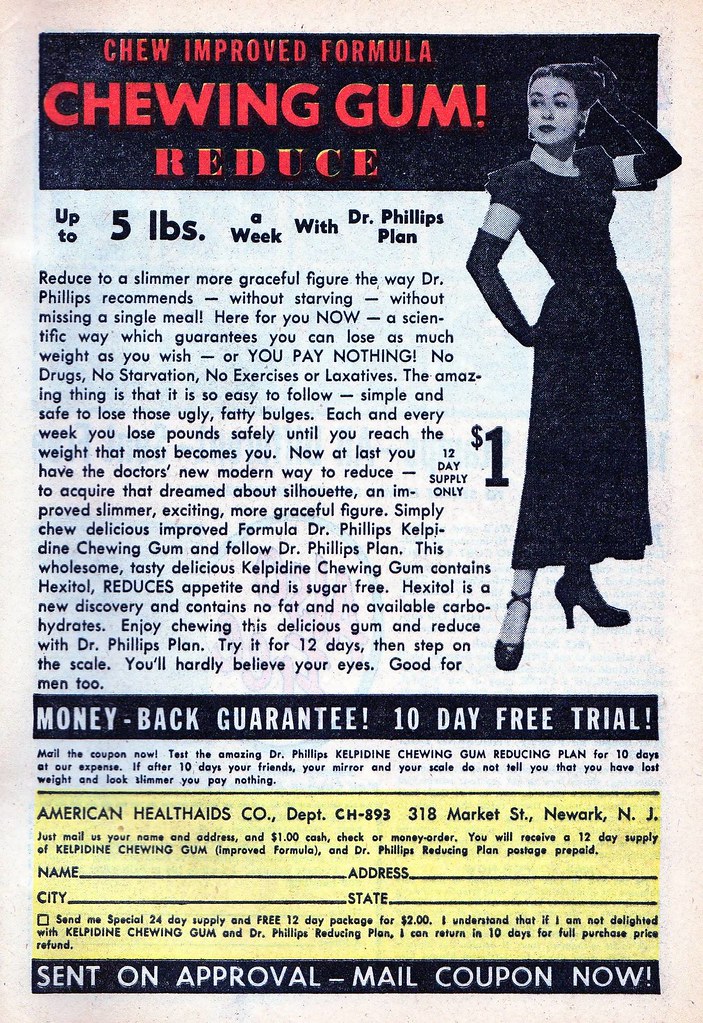 We're back to the reducing plans again, with another ad from that same issue of Lorna! This one, I think, works better, as it does at least use as the main image a person who's presumably had success with this! American Healthaids ran a lot of ads extolling the virtues of "Kelpidine," which as you might have guessed was made from kelp! Since kelp has benefits for one's thyroid, I'd imagine this is what they were figuring made you lose weight! Also note that it promises no carbohydrates... so perhaps the idea that you need to cut down carbs to lose weight really does predate the whole no-carb diet craze! 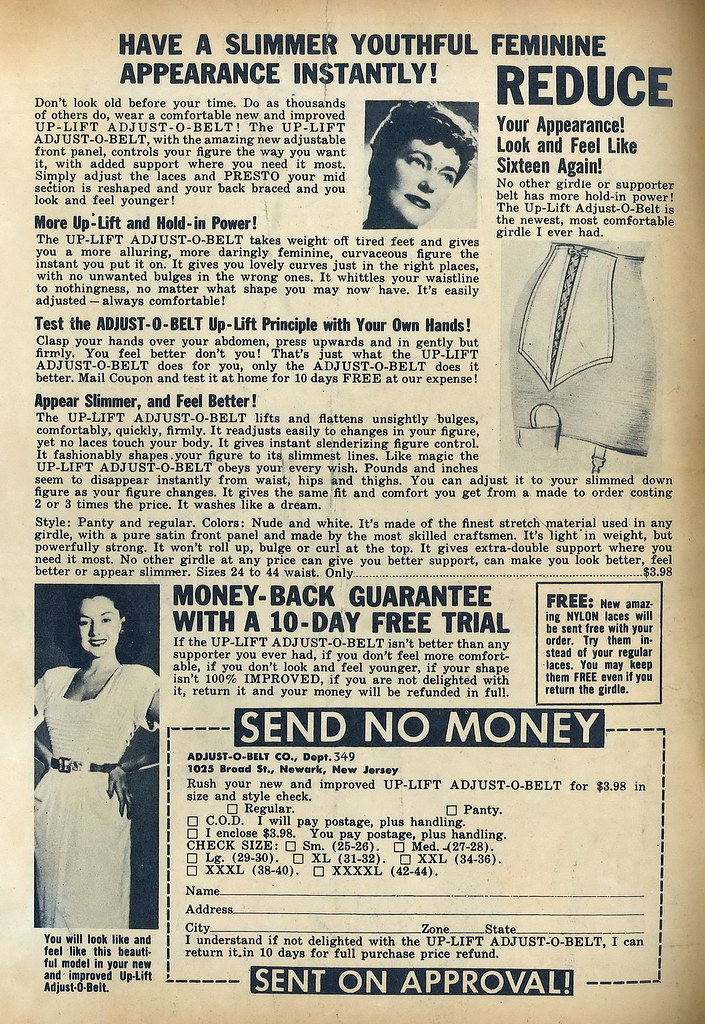 Women who read comics and want to look thinner didn't have to actually lose weight, thanks to this girdle advertised in Lovelorn #8! Note that the picture of the model doesn't say that she's wearing this girdle... just that you would look like her when you wear it! 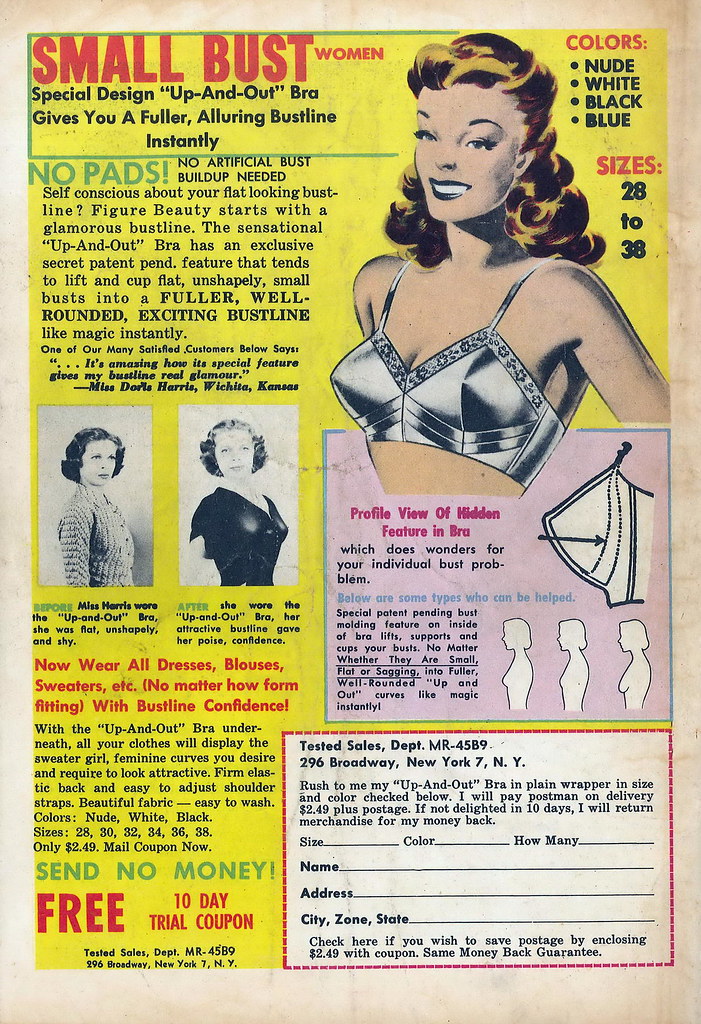 All you need to do is combine the girdle from the inside front cover ad with this bra from the outside back cover, and any woman can have the figure she wants, eh? At least this ad shows the results of it. And is it just me, or does the illustration of the woman wearing the bra look like Julie Newmar? 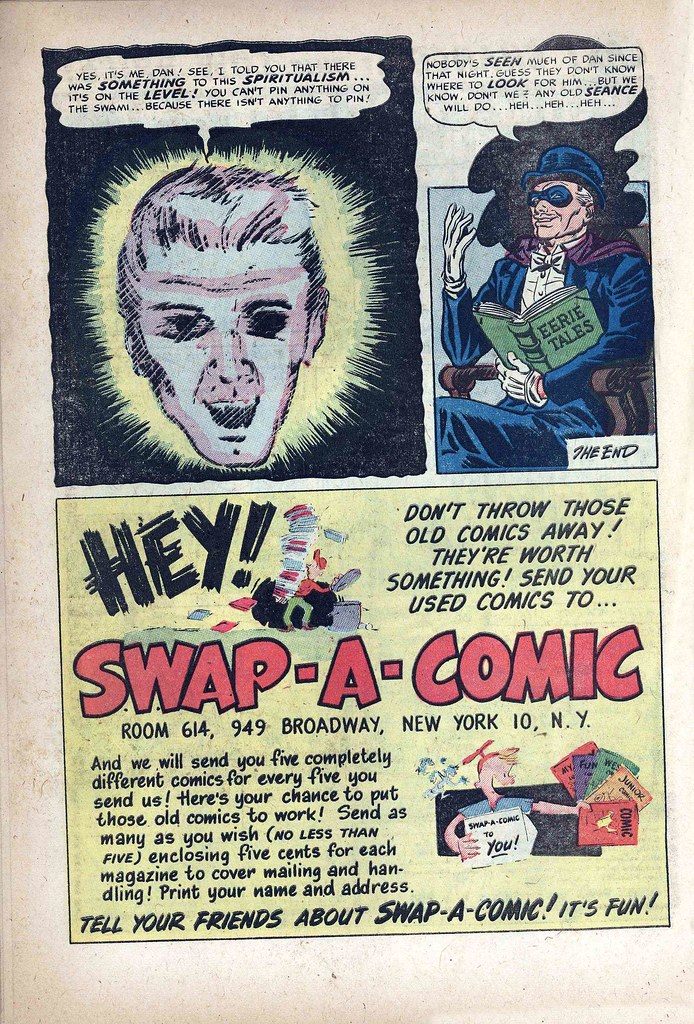 I had to share this ad from Mister Mystery #10, because the whole idea of "Swap-A-Comic" sounds too good to be true! Imagine only having to pay five cents for each comic to have them mailed back to you... these days, it's a lot more, of course! I wonder how many kids responded to this ad and sent off comics that would be valuable these days, and never got anything back? 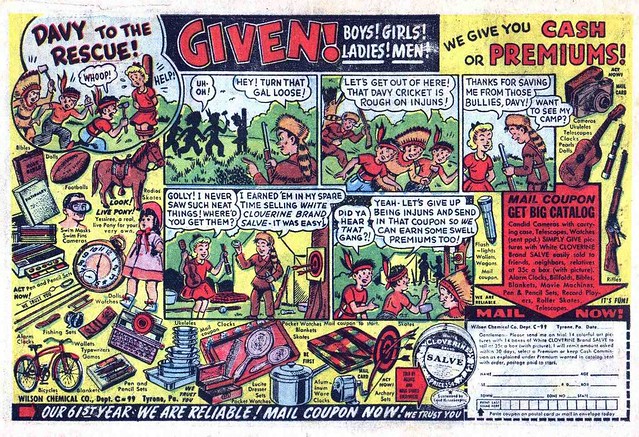 Check out this ad from Nature Boy #3... while I'm sure you're all familiar with ads from companies that promised you prizes for selling their seeds or greeting cards, you may not be as familiar with White Cloverine Brand Salve and their ads! This one really exploited the whole comic strip concept with their ad, didn't they? Believe it or not, this product is still made and sold today, although these days you can just buy it from places like Amazon. It appears to be akin to Vaseline or Chap-Stick, advertised as a skin protectant and offering temporary relief from chapped lips. 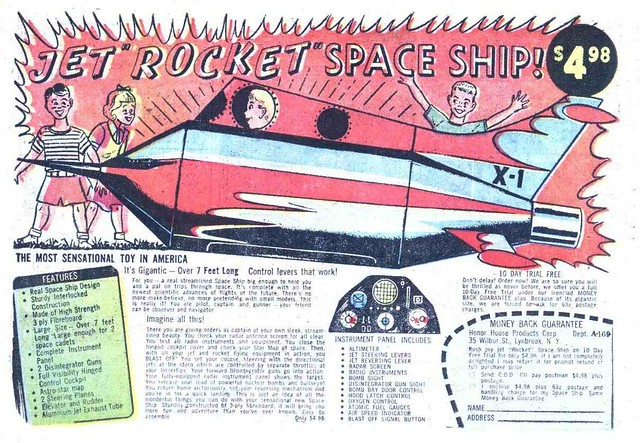 Here's another ad from the same comic book for the Jet "Rocket" Space Ship... I can't imagine that this was too different from the "Atomic Submarine" that was also sold in the comics... and probably just as cheesy in real life. It has to be made of cardboard, and the "instrument panel" is no doubt just printed on the cardboard. I'd imagine the control levers probably slide up and down through slots in the cardboard as well. 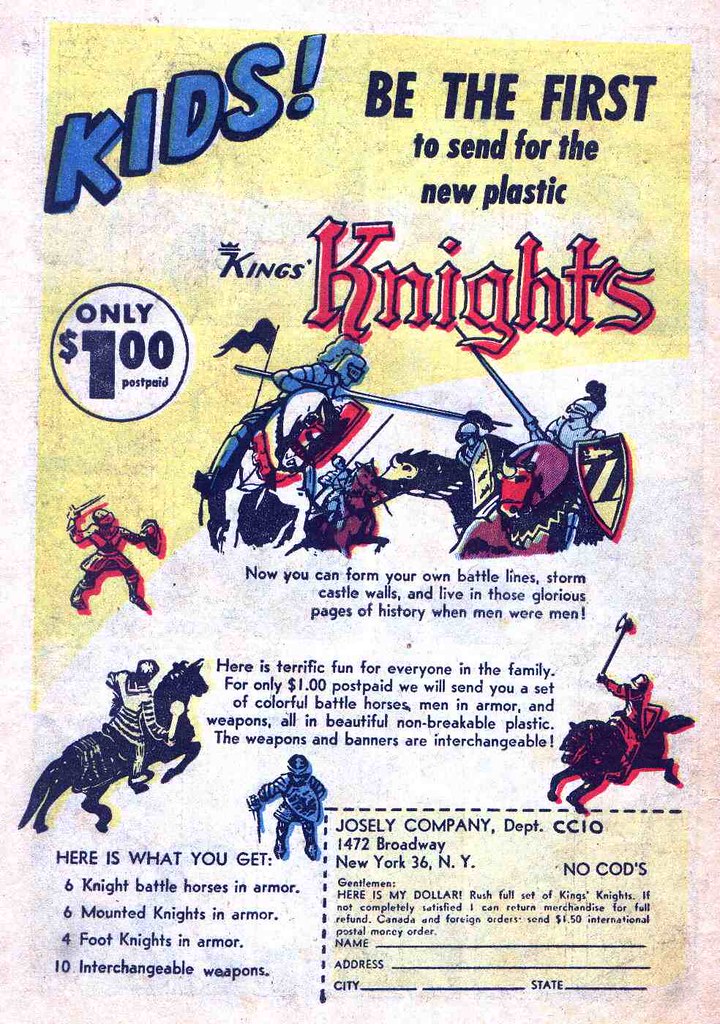 Another ad from the same comic, this one is for a set of plastic "Kings' Knights," which were probably a higher quality plastic figure than most of the similar items offered, given the number of figures for that price. I'd love to verify that they were better than the relatively flat plastic figures usually sold in ads of this type, but I can't seem to find any pictures of them online. What I did find is that this same company made the figures that were pretty much flat plastic with some details molded into them, so... your guess is as good as mine! 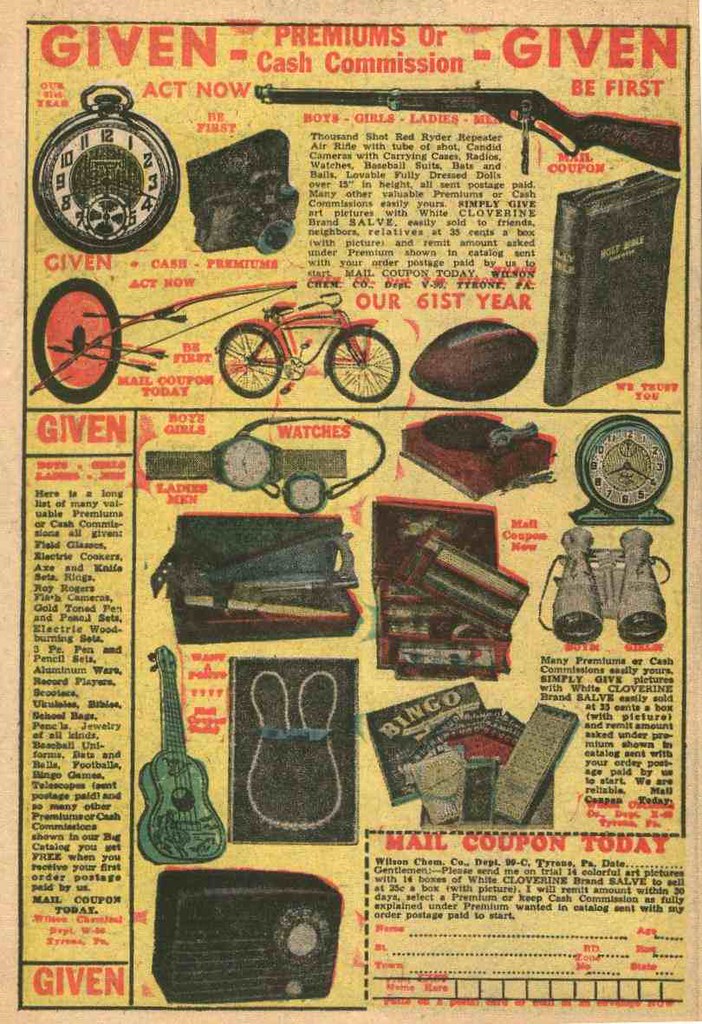 We'll wrap up this installment with yet another Cloverine ad, and note that this one uses a much different style, and it ran in the following issue of Nature Boy! This ad looks like it was inspired by the Johnson Smith Company ads of the era, if a little less cluttered (and using photographs for the most part instead of line art).
Posted by Jon K at 12:01 AM