My Characters: The Five-Card Draw!

Something a little different this time around... it's a villain group, calling themselves the Five-Card Draw.

First, a little background: Back in the 1990s, I was part of a group of guys who got together once a week to play Champions, which was a super-hero role-playing game. Several of us would take turns running the game so that no one person would be stuck being the game master all of the time. Still, I ended up running most of the sessions, as I had more experience with Champions, plus I had all my characters I'd created for comic books to draw on.

Still, that didn't mean that I wouldn't create new characters just for the game. The Five-Card Draw is a group I came up with for a scenario that lasted over several sessions. I had fun coming up with them, and figured if I ever got around to getting my characters published, I'd fold them into the villains I'd already created.

The Five-Card Draw is a super-villain group for hire. They have business cards that find their way into the hands of potential clients, who contact the group with the job that needs to be performed, and the group takes their cut from the proceeds or a fixed fee, depending upon the job. 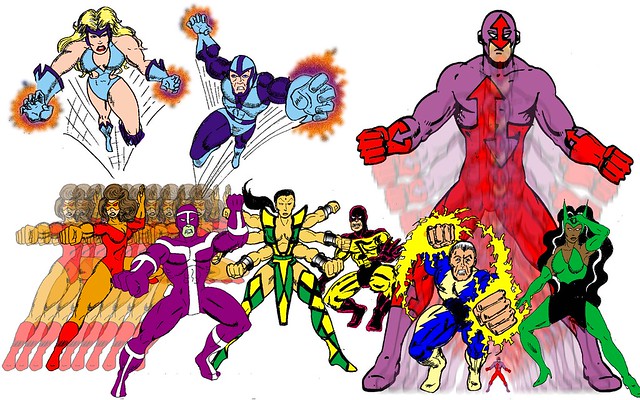 The leader of the group is Mindbender, the woman in green and black with the black hair with white streaks. As you can imagine, her powers are psychic in nature, enhanced by the green gem she wears on her headpiece. Her powers range from the standard telepathy to limited mind control (usually the weaker minds... most heroes are able to resist her, but normal humans rarely can), as well as other talents such as psychometry (the ability to "read" information from touching an object, such as who used it last, and so forth) and some very limited telekinesis (not able to be used as an offensive weapon, but sufficient for picking locks and the like). Her most powerful abilities are her mental blast, which can render most people unconscious, as well as the ability to cast powerful mental illusions. This last power typically is only able to be used on one person at a time, depending on the desired effect. For example, if she wanted to make a group of people believe a person was someone else, she could manage that if the group was small enough. On the other hand, if she wanted to cast an illusion of being somewhere else entirely, completely divorced from reality, she can only affect one target. Prior to finding the gem that amplifies her natural psychic abilities, Mindbender was a professional psychic and fortuneteller operating in the New Orleans area. The gem was a gift from one of her clients who had no idea that it had mystical abilities.

Thunderblow (the guy with the sparkling fists) was one of the first members of the team Mindbenders assembled. Already naturally strong, Thunderbolt has the ability to charge his fists with electricity, and when he hits a target, the electric shock is also combined with a thunderclap. What's not known to most people is that constant exposure to his own thunderclap has rendered Thunderblow deaf; he makes up for it by being a talented lip-reader, and relies on Mindbender to keep him aware otherwise. All that's really known about his background is that he spent some time in the military as a soldier until a dishonorable discharge, the reason for which he refuses to divulge. He is the oldest of the group, looking to be in his early 60s (although still in excellent physical condition).

Two-Way (the growing and shrinking guy) has the ability to change his size at will. It's not known if this is a power that he has himself, or if it's somehow a product of the suit he wears. He can change size instantly, gaining great strength and durability at giant size (he typically will grow to a height of 25 feet or so, but is capable of growing to twice that size), and gaining great dexterity and speed at miniature size. He has to be careful about using his twin abilities in succession, growing and shrinking back and forth in a short period of time, as that taxes his system and can leave him dizzy and weak. He doesn't talk about his past, but had been operating on the East Coast when he was recruited, and has a Jersey accent.

One-Note Johnny (the guy in red and yellow with the note on his chest), as you might imagine from his name, has sonic abilities. His main offensive attack is a deafening sonic blast that can cause unconsciousness, but he can use his voice in other ways that are more subtle. For example, he can make one believe he's telling the truth, no matter how outrageous a lie he's telling, unless the listener is prepared for it. His sonic blast can be amplified to cause physical damage, such as causing a wall to explode. He's originally from Nashville, TN, and had hopes of being a professional singer before his powers manifested themselves.

Kali (green and yellow outfit, with six arms) is a martial artist. Her extra four arms may be a mutation of some kind, or they might by cybernetic -- nobody knows for sure. What is known is that she has a natural skill with all six arms, and has no problem coordinating them when fighting. She can either use her martial arts skills to fight unarmed, or when desired, can utilize weapons such as sais or other bladed weapons. The extra arms give her the ability to climb at great speeds, as she is able to find handholds within reach easily. She is of Indian ethnicity, as one might imagine from her code-name.

Gravitron and Gravitrix (above, flying, in light blue and purple) are a husband-and-wife team of villains who somehow gained gravity-based abilities. They can fly and can cause changes in how gravity affects other people or things. For example, they can increase the pull of gravity to stop a target from moving (or to cause something to be destroyed by the increased gravitational effect), or they can decrease the personal gravity of a target, allowing it to float away. Of course, either effect can be discontinued at will -- imagine making a semi-truck light as a feather, and then pushing it over an enemy and canceling the gravity effect, or even increasing the gravity on the truck! Sometimes they'll use the decreased gravity power to provide travel for the team. They had been operating in and around Texas.

T-Man (purple and white) has teleportational abilities, although again, it's not known if he has the powers or if he somehow gets them from his suit. He can not only teleport himself, but he can teleport other people or objects without having to touch them, so long as he's in close enough range (in combat situations, about 10-12 yards, and in non-combat situations, 100 yards or more, depending on how much time he takes to focus on his target). He is able to teleport himself or others to points in his line of sight, or he can also "fix" a location to teleport to as needed. The range he can teleport himself or someone else depends largely on circumstances... the further away the destination, the longer it takes to prepare for the teleport. His chief role in the group is to help provide an escape for the rest of the team if there's trouble, by teleporting himself to somewhere he can stay hidden, and then teleporting his teammates out of harm's way. His original base of operations was Los Angeles.

Jen X (red and orange) has a name that's intentionally misleading. Those not in the know assume it's a play on "Generation X," but the X actually stands for the Roman numeral for 10, as her ability is to make duplicates of herself. These duplicates work in complete harmony, and can overwhelm a target. Anything Jen X has attuned herself to will duplicate with her, so if she's attuned herself with a gun, that gun duplicates when she does; she can't pick up an item and immediately duplicate it (and even if she could, it wouldn't work for thievery, as any duplicated item disappears when she absorbs her own duplicates). Not only is her name misleading from the standpoint of what the "X" means, even the number is a lie... While she will only create up to nine total duplicates at a time in normal situations (for a total of ten of her), she is actually able to create a total of 15 duplicates (i.e. 16 of her in total). This is because her power actually works by dividing herself in two, so to speak, with each duplicate also being able to duplicate itself once, and so on. The duplication effect happens so quickly that it appears that she's creating all her duplicates at once, but it's really a case where she duplicates herself once, then she and the duplicate do it a second time (for a total of four), then each duplicates herself again (eight total), then two of the duplicates do another duplication. Each duplicate is in constant mental contact with the others, so that if one is captured, the others know where they are and what's happening around them. She doesn't like to talk about her past, but her tendency to pronounce the Washington as "Warshington" gives her away as being from somewhere in the midwest.

The group calls itself the Five-Card Draw because when an assignment is received, Mindbender picks the five members of the team that she believes would best be able to accomplish it. In the event that one or more members of the team are captured, then the remaining members can fill in. It's extremely rare that the entire team would be used on a mission, unless the client is willing to pay the full fee (which can run up there).

Mindbender decided to form the team after several failed attempts to operate as a solo villain. Each member of the team had been operating solo (except for Gravitron and Gravitrix, who were always a duo) in different parts of the country with limited success. Mindbender went through a long process of determining her team's roster before approaching each one of them and explaining her concept. None of the members know if they were the only ones who received the offer, or if there were others (one thought that's occurred to each of them at one time or another is that if something were to happen to take one of them out permanently, Mindbender has another villain ready to take their place... whether this is true or not is unknown).

While the team doesn't actively seek out superheroes to battle, they have practiced tactics to deal with them. They operate as a team better than most villain teams, as they have a consistent membership and spend a considerable time training in their secret headquarters.
Posted by Jon K at 12:01 AM

Email ThisBlogThis!Share to TwitterShare to FacebookShare to Pinterest
Labels: My Characters