We're up to the 17th of 39 episodes of the Beatles Cartoon, and the first segment of this episode is "Anna," based on a song that appeared on the Beatles' first album. It opens with the Beatles on a beat-up Japanese junk that Ringo's rented for their sightseeing tour. John and Paul are rowing as Ringo and George enjoy the ride, even after John and Paul "accidentally" splash them with the paddles. The junk enters a foggy area, and they get the boat ashore for a break (George is tired from watching them row). George and Ringo quickly lie down for a nap.

While they sleep, Paul and John spot an eerie-looking boat passing them, with a beautiful woman on board. They decide to check it out, but are stopped by an old man, who warns them not to go on board the ghost ship Ah-Nah, or they will sail into the enchanted lagoon from which no traveller has ever returned! Paul doesn't care, as he loves that boat (more likely, he lusts for the woman on it). As he floats away dreamily, John warns him to come back!

Paul is in the arms of the captain of the boat, and the song "Anna" begins. Hearts burst from Paul's head, and after just a pat on the head from the captain, Paul swoons! The song pauses after the first verse as Paul's band mates try to get him to come back! They get into their boat and start after Paul as the song resumes. Meanwhile, Paul makes himself at home on a hammock. On the junker junk, the oars break, so John and George replace them with their guitars and start rowing furiously.

There's a pause in the song before the middle eight as the splashing from the guitar rowing starts filling the boat with water, and Ringo has to use his drum to bail it out before the song resumes. Paul seems blissfully unaware of his danger as he's fed grapes by the captain of the Ah-Nah. This gets repetitive as the cartoon cuts between Paul eating grapes and the other Beatles rowing after him (especially when there's a repeat of the middle eight "All of my life" part of the song after it's just played).

The Beatles catch up with the boat, crashing into the end of it, and Ringo tries to lasso the boat, but instead ties himself up. More of Paul eating grapes. The other Beatles climb aboard, startling the captain, who rings a gong, summoning a pair of muscular warriors! Ringo arms himself with a drumstick and cymbal, calling, "Charge! And all that kind of stuff!" The warriors find themselves scared of Ringo, who throws drumsticks and cymbals at them as they run off. The Beatles rescue Paul and row off. Later, at their hotel, Paul vows to stick close to his bandmates, but then he finds himself alone in the elevator, with the Ah-Nah's captain posing as the elevator operator! The other Beatles race up the stairs to rescue him as the segment ends.

Next up is the singalong, which Paul introduces. Ringo is asked to lower the singalong sign, and he says it should get the people "Singin'", which Paul tries to get him to pronounce with the end "g," but he fails to get the point. When Paul tries to get him to watch his pronunciation, Ringo insists he does fine, but drops the "g" in "dropping"! When Ringo insists that dropping a "g" never hurt anybody, a "g" from the sign falls off and hits him on the head!

The singalong song begins, featuring the Beatles' cover of the Carl Perkins song "Matchbox," which was originally released as part of the Long Tall Sally EP in the UK, and not part of an album until Past Masters Volume 1 came out on CD (although in the US, Capitol put it on Something New, which featured songs that weren't part of regular albums plus a few songs they cut from US versions of UK albums). Oddly, even though the Beatles' cover of the song has the chorus going "I said I'm sittin' here watchin', matchbox hole in my clothes," the on-screen lyrics has the original Perkins lyric, "I said I'm sitting' here wond'ring will a matchbox hold all my clothes." The lyrics accompany pictures of Ringo in a rocket ship.

There's another odd mis-lyric on the second verse, with "I'm a lone poor boy and I'm a long way from home" rendered as "I'm an old poor boy". The pictures of Ringo's ship have him crashing on presumably Saturn, where he's menaced by a monster before his rocket escapes (with the third verse correct on-screen, as well as the third verse).

The second singalong song opens with Paul congratulating the kids at home on singing so well, and Ringo wanders onstage reading a book out loud, saying "The rain in Spain falls mainly on the plain," which he says will help him "pronounciate good, like an Englishman should," which Paul corrects to enunciate, and asks Ringo, "Don't you know the King's English?" Ringo responds, "I know the Queen is!" Paul promises to give Ringo diction lessons after the next song is introduced, which Ringo insists that he cross his heart and hope to die, then then step on a cat and hit in his eye -- and when Paul says that final part, Ringo smacks him on the head with the book, explaining he won't take lessons from someone who's cruel to animals! He wanders off-stage, reciting, "How now, brown cow?" as he passes a man in a cow costume, who removes the headpiece and replies, "Not bad, how's by you?"

The second singalong begins, "Thank You, Girl," which was on The Beatles Second Album in the US, although only as a single in the UK until Rarities (on CD, it's part of Past Masters Volume 1). In the pictures accompanying this one, Ringo's sick in the hospital, and is attended to by a duo of pretty nurses (drawn much prettier than the captain of the Ah-Nah, by the way).  The first lyric error I spotted is on the second verse, with "can" replacing the word "could" in "I could tell the world a thing or two about our love." As this verse goes, Paul (dressed as a doctor) pursues the pretty nurses! During the middle eight, Ringo's wheeled into surgery, and is covered by a screen.

Paul, dressed for an operation, goes behind the screen to operate! The nurses and Paul leave, and apparently Ringo is fine.

The final segment is "I Don't Want to Spoil the Party," which was part of the UK's Beatles For Sale, although Capitol put it on Beatles IV, another of their "extra" Beatles albums created by cutting songs from UK albums so they could release more records! This opens with the Beatles at an art museum in New York, with John leading their tour. The others complain they're in NYC to enjoy themselves, to which John replies they have no culture! If it weren't for John, he says, they'd be traipsing about in Greenwich Village... which sounds like fun to them, so Paul, George and Ringo race out of the museum, and catch a taxi to Greenwich Village! 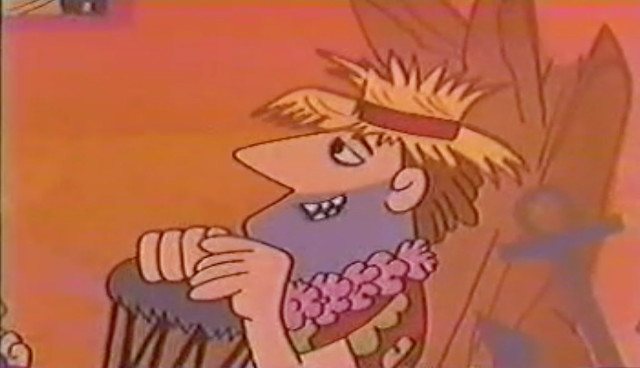 As the other three Beatles arrive, they can't seem to find a party to crash, but then are invited by a beatnik hanging out of a window to join his party! They offer to come up, but the beatnik says they'll bring the party down to them! Inside, they start meeting the beatniks, including a strongman who appears to be operating an espresso machine! Shortly, John arrives, and asks a street cleaner if he's seen his band mates, and the cleaner points John to the beatnik party.

John enters, and Paul, George and Ringo see him coming, and decide to try to blend in to avoid being caught! The song begins as John tries to find his friends among the beatniks. The middle eight of this song is cut prior to the guitar solo. There's a lot of repeating of animation of the beatniks during the song.

Finally, when the song ends, John steps on a skateboard, which sends him crashing into his friends, causing their disguises to come off. Paul begs John not to be angry, but John starts speaking all beatnik, saying that he "digs this Village scene the most," and that he's quitting the band!

Okay... so overall, this was probably the most disappointing episode of this series I've seen yet. As I noted before, both the first and last segments repeat a lot of the same animation over and over, as if they needed to pad out the episode! I can only guess that since there were still about nine episodes left of this first season, some costs had to be cut somewhere... but I hope this isn't going to be a trend!

It does seem odd to me that in the singalong, the animators managed to draw two pretty nurses, but in the first segment, there's nothing really attractive about the girl there! Also, I didn't catch a screen shot of it, but during the song "I Don't Want to Spoil the Party," John is drawn walking around in a very awkward position, arms held straight out to his sides, elbows bent and forearms down. His legs are also drawn longer than usual.
Posted by Jon K at 12:01 AM

Email ThisBlogThis!Share to TwitterShare to FacebookShare to Pinterest
Labels: Beatles