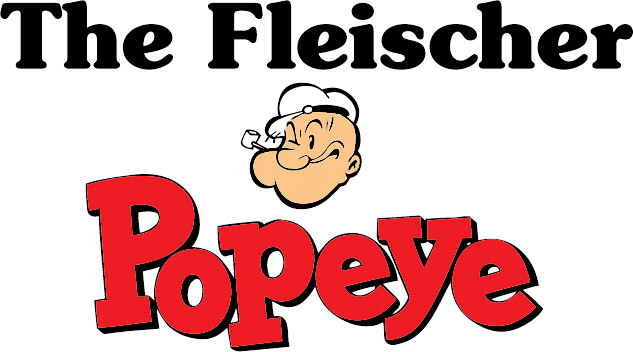 We are up to the 19th in the series of Fleischer Popeye cartoons, and this one is called "Beware of Barnacle Bill"! As you might imagine if you've watched any of these cartoons, the song "Barnacle Bill the Sailor" figures into this one... and in fact, in the title sequence, after the initial fanfare of the Popeye song, it segues into an instrumental version of the Barnacle Bill song.

The cartoon itself opens with Popeye showing up at Olive's apartment building, where he rings the bell so Olive will let him in. As he walks up the stairs, Olive looks forward to his arrival. Popeye walks into her apartment and tells Olive that she can ask him to marry her! Olive tells Popeye in song that they can't get married (Popeye's flowers wilt as Olive tells him this). Popeye demands (also in song) to know who it is she loves instead of him, and Olive pulls out a picture of Barnacle Bill from her shirt to tell him (of course, it's actually Bluto under a different name).

Popeye tries to warn her about Barnacle Bill, and even punches the picture of Bill (breaking the glass and giving the photo a black eye), but Olive refuses to listen to Popeye. Popeye threatens to do violence to Bill, going into detail (continuing to sing). Bill shows up at the door, knocking so hard the frame of the door threatens to come off! Popeye tries to keep her from going by pulling the rug Olive walks on so she doesn't make any progress to the door, but runs out of rug.

Bill forces his way in, knocking Olive aside, and starts looking for Olive (not realizing that he's knocked her into the wall next to the door). Bill demands to know who Popeye is, and he tells Popeye that he's too late, Olive is going with him (the singing stops during this). Popeye insists Olive is staying (each of them punctuates their argument with a blow to Olive!).

Bill picks up Olive's dresser and throws it across the room at Popeye, and it bounces off the wall and comes back to Bill, with Popeye inside as Bill starts singing his own praises (Popeye pops out of a drawer to mock him). Bill then punches Popeye across to the other side of the room through a door, which pops down revealing a Murphy bed, Popeye laying on it, unconcerned. Popeye's then thrown to the ceiling lamp, where he's stuck face-down, his head through the frame, and Bill starts using Popeye's head as a punching bag, but Popeye's able to take it.

Popeye swings free, and the two start comparing their muscles -- Bill's are noticeably bigger, until Popeye eats his spinach, and his muscle becomes like the Rock of Gibraltar. The "Three Cheers for the Red, White and Blue" chorus starts up after the Popeye fanfare, and Popeye starts mopping up the place with Bill! First he punches Bill up the railing of the stairs a few times, then Bill's punched out the window, where he bounces off a few buildings before crashing back into the apartment through a sunroof, where he slides down the railing again.

Popeye then punches Bill out of the apartment again, and Bill goes bouncing off the power lines before ending up in his ship on the dock, which sails off. Olive decides now that she loves Popeye more, but Popeye's decided that Olive can go ahead and marry Bill but at least he straightens up the apartment on the way out (although when he slams the door, the place ends up as trashed as it did from the fight).

Olive starts crying, "There goes the Navy... but there's still the Army!" She salutes as we iris out.

While a fun cartoon and a bit of a change of pace, there's not a lot to recommend it other than the novelty of most of the dialogue being sung instead of just spoken. Most of the usual elements are gone -- Popeye does little or no muttering under his breath, the only display of his strength and toughness is how he is able to handle Bill's beatings... he's never really in trouble at all when he eats his spinach, either... he's just fed up with the situation and wants to get it over and done with.
Of course, this is not the only time Olive's ever been fickle towards Popeye... it happens with alarming regularity.

There's an alarming lack of visual gags in this cartoon, as well -- about the only good gag is the Rock of Gibraltar appearing on Popeye's bicep when he eats his spinach. Perhaps when Bill was punched out of the window and bounced off of buildings, the entire area could've become a gigantic pinball machine, with windows "lighting up" and bells ringing. No transformation punches, either! The funniest gag is when Popeye gets Bill to hold his spinach for him before he eats it and starts mopping up the place with him.

I believe the "Barnacle Bill" theme would appear in some later cartoons. You'll recall it was used in the first Popeye cartoon as Bluto's theme. The song itself is the most interesting thing about this cartoon, as it was originally an American drinking song adapted from a traditional folk song. It's been around since well before 1927, when the first lyrics were published. The original song is... well, bawdy is putting it lightly, as the lyrics are all about Bill wanting to have sex with the maiden! Clearly, these lyrics weren't going to be useable for the Fleischers (who had also used the tune in a Betty Boop cartoon). All-new lyrics for the cartoon were written, although one has to imagine that most of the adults watching the cartoon in the theater were at least familiar with the tune, if not the original lyrics.
Posted by Jon K at 12:01 AM