Okay, you've (hopefully) read three days of musings on Dragon Ball Z, as well as a day on Agents of SHIELD, how about a good-sized edition of "Cool Stuff" to finish up the week? 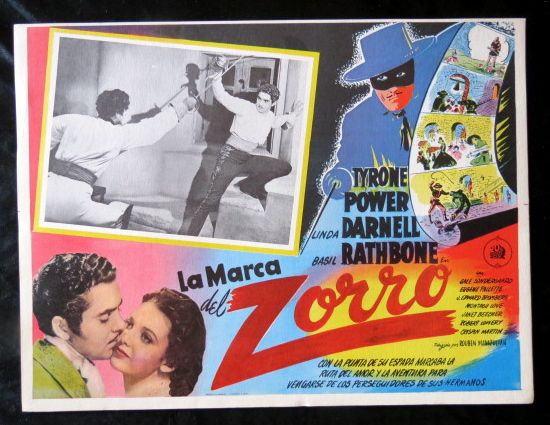 And we're starting out with this Mark of Zorro Mexican  lobby card, but wait, there's more after the jump!

Okay, I know this is pretty late coming, but at least I'm finally getting around to it! Spoilers ahoy!

So, having watched the 62 episodes so far of Dragon Ball Z, and having learned a lot more about the characters and situations on this show, I have to admit, I still have a lot of questions as well as speculations and observations.

I realize that in the first installment of this article series, I kind of left something out... when I started watching the show originally, it was in the seventh saga, which started on episode 195 (yeah, over 130 episodes from where I'm currently at). By the time I started watching, Gohan has become a teenager, and has a younger brother, Goten (who looks just like he did at six or seven, just like Gohan looked like Goku at that same age). Things have progressed even more than that, however! Vegeta, who up to the point I watched is definitely one of the bad guys, is an ally of the Z-Fighters (I wouldn't go so far as to call him a friend, he's still an asshole, to be honest), and has married Bulma, believe it or not, and they have a son named Trunks (yes, characters have weird names on this show). I don't remember seeing Yajirobe in the show at all at the point I'd watched before, but there is a character named Hercule (in the version I saw before) who was called Mr. Satan in the original Japanese version of the show (and I believe the remastered version I'm watching restored his name) who is just as much of a jerk, thinking he's the most powerful fighter in the world. If I recall, he was introduced during one of the parts of the Cell Saga (there were actually two parts of this, Imperfect Cell and Perfect Cell were the fifth Saga, and the Cell Games was the 6th Saga). He's considered the world's strongest man and best fighter by the rest of the world, but he's not capable of defeating the last of the Z-Fighters.

There are other surprises, too... Krillin, who had been bald in all the previous episodes, now has a full head of black hair! And there are more surprises than that for the character whose catchphrase seemed to have been "...and I still haven't got a girlfriend!"
Click for more ->
Posted by Jon K at 12:01 AM No comments:

Continuing with my writings about Dragon Ball Z... when last we left our heroes, Goku and his friends were badly injured or dead! When Piccolo was killed, so was Kami, whose life force was connected with Piccolo's, and so the Earth Dragon Balls disappeared, so there's no way to wish the dead back to life again... or is there?

As revealed in the previous saga (although I didn't explain all this before), Piccolo and Kami are from the planet Namek, which has its own Dragon Balls. When Vegeta left Earth to heal up, his plan was to get the Namekian Dragon Balls to make his own wish (the same wish he intended to use the Earth Dragon Balls for, eternal life) once he was back to speed. Meanwhile, Goku and Gohan are in the hospital recovering from their injuries (since there's no Senzu Beans available for instant recovery yet). Bulma's plan to get to Namek is to use the remaining Saiyan space pod (the one Nappa used) to get to Namek, but when she tries to use the remote control that Vegeta left on Earth to bring it to them, she accidentally self-destructs it!

Once I caught up with all the current TV shows I've been watching (yes, I know, I still haven't posted my thoughts on Agents of SHIELD yet, I'll try to get to it tomorrow), I decided my summer viewing was going to be Dragon Ball Z.

This show has been around for a very long time, and is probably the most popular anime among American anime fans, if for no other reason than its ubiquitousness... for a very long time, it was part of Cartoon Network's "Toonami" programming block, and it had been in five-day-a-week syndication long before then.

I'd seen a few episodes of DBZ and its predecessor, Dragon Ball, in the past, but had not been a regular viewer until after my first wife, Barbara, passed away. After her passing, I found myself with lots of hours to occupy, and one of the ways I filled them was watching more TV shows, especially on Cartoon Network (which had a much more viewable line-up then compared to now, at least so far as my tastes are concerned). For the first time, I was watching the show on a daily basis, but at that time, it had been running one of the final sagas.