OK, let's get this show on the road, shall we? I mean, I can't have just one post for this week, right? So here's an installment of "Comic Book Ads"! 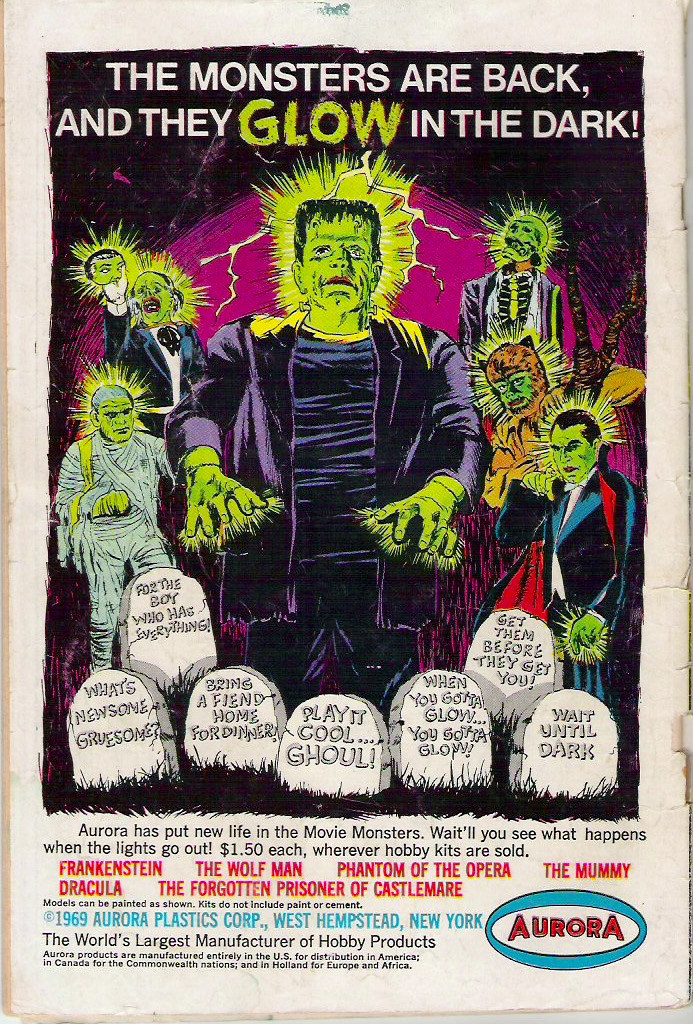 First up is this full-page back cover ad for Aurora's monster models, with the added feature of glow-in-the-dark pieces. These models were perennial favorites for quite a long time, with these two releases during the 1960s, plus reissues in the 1970s... and there was yet another reissue called "Illuminators" in the 1980s or 90s, although not all of the monsters were released in every reissue. If I'm not mistaken, these have been reissued sometime in the last 10 years, too.

So far as the ad itself goes, it's one of the lesser ones that Aurora produced... the art is just kind of okay, although it does accurately represent the kits... the Frankenstein Monster looks squashed though, doesn't it?

This 'N That Time!

ITEM! Well, obviously, this here blog of mine has been on an unintended extended hiatus. Frankly, I'm not sure what happened, really, because I'd been getting ahead on it again, and then things started happening. You'd have thought that once I got home from the hospital in November for three weeks recovery before going back to work, I'd have had time to work way ahead, right?

ITEM! So, I don't believe I touched on this before, but shortly after getting out of the hospital, I went for a physical exam, and a hernia was discovered (one I'd suspected while I was in the hospital, although not before). This will be repaired on Tuesday, i.e., tomorrow. Fortunately, it should be only a week-long recovery, but we will have to see, eh?

ITEM! Ever get a whim that pays off unexpectedly? I did, the other day... decided just for the heck of it to check on Craigslist to see if anyone happened to be selling any decent comics for a decent price. As luck would have it, a guy had about 75 comics, silver age to 90s, he wanted to sell for $30. I arranged to meet with him, and holy crap, these books were definitely worth more than an average of 50 cents each... even the coverless ones! Here's just a brief sampling of what I got in this lot: ForbiddenWorlds #138, Drag N/ Wheels #40, a number of coverless Marvel King-Size Specials, Marvel Special Edition #3 (the all-in-one treasury edition of Star Wars), and a whole mess of other stuff, such as some Gold Key Disney and other cartoon books, and a fair number of 70s DC and Marvel books, plus a few deluxe miniseries, such as Wild Cards and Cosmic Odyssey. There's good reading ahead!

ITEM! As much as I hate to admit it, on Friday, Donald "Grab 'em by the Pussy" Trump will be inaugurated as the 45th president of the United States of America, unless a miracle happens between now and then. I am so disgusted at this turn of events that I can't sleep at night sometimes. How did this nation get to the point where people are so incredibly stupid that they'd not only believe news stories that are obviously fake (by any journalistic standard... The Onion is a more trustworthy news site than the source of some of those articles shared ad nauseam by Trump supporters on Facebook), they'd also put their trust in someone who can't be trusted to say the truth... ever! There are way too many instances of Trump saying something that was recorded on video that he later denied ever saying! And as if that wasn't bad enough, his supporters got it into their heads that somehow, Trump actually gave a shit about them, and was going to somehow make their life better! And even this close to the inauguration, with all of Trump's cabinet post picks being fellow billionaires who have no business being near a government job, plus the Republican-controlled Congress not only dismantling the Affordable Care Act (stealing health insurance away from at least 20 million Americans, and likely leading to the deaths of over 2,000 of them at a minimum), this same Congress is also threatening to cut the security budget for our embassies around the world if they can't get their way on something else! The audacity of the Republicans to so cavalierly sentence Americans to death like this, after going on and on about how Hilary Clinton was supposed to be responsible for the deaths of four soldiers in the Benghazi embassy while she was Secretary of State, making her a terrible person (never mind that she asked Congress to increase embassy security budgets, plus the Secretary of State has no ability to control troop deployments -- that's Secretary of Defense)... how does that make them better? Because these are just ordinary Americans and not soldiers? Is this the conversion scale we're using, that 2,000 Americans < 4 American Soldiers? Because that math doesn't work out.

I fear for this country, as well as this planet... and I hope that somehow, the Trump supporters will finally realize that Trump only cares about 1) Winning, and 2) Making Money, and that they are going to just get pissed on while this despicable person is in office, and realize that they have been incredibly stupid to be so easily duped. These idiots have spent eight years complaining about Barack Obama, who has been an amazing president (not just my opinion, the numbers don't lie), but they don't have any real arguments about how he's supposed to be a bad president, just more fake news crap and bullshit hiding a thinly veiled racist reasoning. For crying out loud, this is the 21st Century... we should be beyond the point of filling the most important office in the land with a rich white man... don't you people remember what has happened the last few times this happened?

ITEM! I really feel I should mention, however late it's been, that I thought the CW's crossover "Invasion!" with Arrow, Flash, Legends of Tomorrow, and Supergirl was outstanding and amazing. I hate to say it, but that was the best DC movie I've seen in a long time! It really feels to me like the TV shows really get the characters and the DCU better than the theatrical people, you know? Yes, they've tweaked the characters a bit, but the core of them is there. Another thing I love about these shows is that relationships that would be made a big deal of on other shows (such as gay or lesbian couples, or so-called interracial couples) are "just" relationships on these shows. It's all normal and everyday. It's a breath of fresh air.

ITEM! I hope that I'll be able to keep posts going this week, but it's possible that I might miss a day or two... your patience is appreciated!